Goals from Sergio Ramos and Paco Alcacer gifted La Roja all three points, despite a spirited second-half response from their hosts – with substitute striker Florin Andone halving the deficit just three minutes after coming on.

They were fortunate to still have a chance of snatching a result, after a string of excellent saves by goalkeeper Ciprian Tatarusanu in a first-half packed with Spain creating chances galore. The 33-year-old was thoroughly kept busy, making eight stops throughout and was helpless to stop either goal by their visitors.

Spain will hope for a more clinical display and same result in their upcoming fixture, as they host a winless Faroe Islands on Sunday – who were thumped 4-0 by Sweden tonight elsewhere in the group’s other fixtures.

Other results see Romania drop down into fourth after victories for Norway and the aforementioned Swedes, so there’s plenty to play for as qualifiers continue to intensify before the final round in late November. With that in mind, here’s a look at five talking points from a frantic finish to what should have been a comfortable away victory: 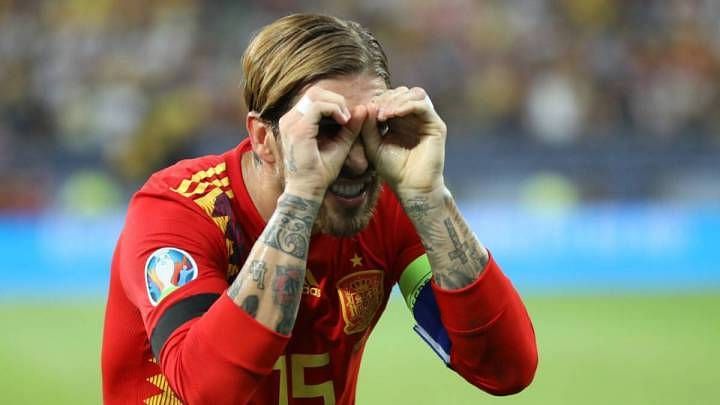 Ramos could have scored before he eventually did, seeing his headed close-range effort tipped over the crossbar by an inspired Tatarusanu. However, he atoned for that miss with a composed penalty finish before the half-hour mark and was booked for his celebration, which only intensified persistent booing from disgruntled Romanian supporters in the 33-year-old’s direction whenever he touched the ball.

Rather than get flustered in the immediate aftermath, the captain embraced his role as pantomime villain even more with a yellow card hanging over his head before regularly seeking touches out from the back. He recorded 114 touches, 97 passes completed (95% success), four duels won, three clearances and completed one tackle over the 90 minutes.

Defensively, the Real Madrid defender has often been suspect defensively and again that was the case here. His role in Romania’s goal didn’t make for pleasant viewing, beaten to the ball in the box by substitute Florin Andone, who headed beyond Kepa to halve the deficit.

His reckless tackling style almost got him into trouble on a counter-attack, though instead he watched helplessly as centre-back partner Diego Llorente was sent off for a cynical last man challenge on an onrushing George Puscas just outside the box. If not already booked or instead more assured in his attempted tackle, that situation would have been easily avoided.

Fortunately for them, their numerical disadvantage only lasted ten minutes and Romania failed to capitalise as Spain survived a spirited fightback late on to continue their 13-match Euro qualifying winning run. 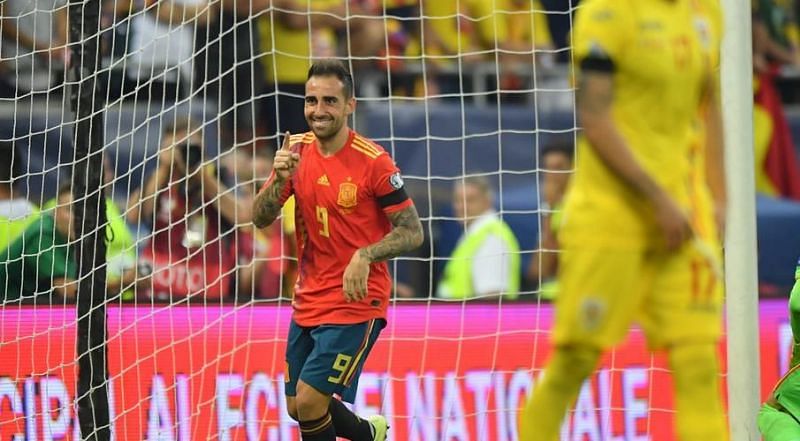 With six goals and an assist in five games for Borussia Dortmund to start the new campaign, Paco Alcacer is continuing to thrive away from home comforts in Spain’s top-flight after an initial loan deal from Barcelona was made permanent this summer.

Netting 18 goals in 26 Bundesliga appearances last term, he’s already on course to surpass that tally with more regular minutes under his belt. The key for him, both at club and international level, is to cement himself as the bonafide number nine in teams that will benefit largely from his presence leading their respective forward lines.

While he has Marco Reus, Jadon Sancho and Julian Brandt among the esteemed supporting cast at Dortmund, Spain’s attacking conundrum is more complex given their playstyle and desire for creative-minded playmakers across midfield, with less reliance on width. The likes of Saul Niguez, Ceballos and Thiago (unused sub) fit the bill, though it doesn’t always work in practice against teams like Romania that sit deep and soak up pressure.

On this occasion, Alcacer needed to be patient and wait for opportunities to arrive. Despite being wasteful in possession (63% success) and having limited touches (22 in 85 minutes), he quietly worked hard off-the-ball.

Although Tatarusanu made important saves to deny him a first-half hat-trick, importantly his belief never wavered and instead persistently manoeuvring into dangerous positions. It was only a matter of time before earning his reward minutes after the restart, applying the finishing touch to a well-worked passing move.

It was far from a vintage display by the 26-year-old, who still continues to improve and is finally beginning to earn the respect his goalscoring exploits desire. With ten goals in 16 international caps for Spain’s senior side, the onus will be on him to do what Álvaro Morata couldn’t: cement a consistent centre-forward berth going forward, where he’ll be tasked with proving he is more than just a goalscorer. 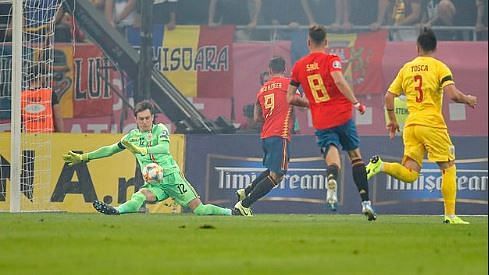 Tatarusanu was alert and had to be, keeping Spain at bay while keeping his teammates in the game

Whenever you’re playing against a top side, goalkeepers expect to be busy. Tatarusanu had to be alert from the word go, quelling Alcacer’s early one-on-one opportunity after just thirty-odd seconds. There was plenty more where that came from, too.

After leaving Nantes this summer, Ciprian joined Lyon on a free transfer. However despite training with his new teammates, the 33-year-old’s last competitive appearance was also for his country: keeping a clean sheet during their 4-0 win over Malta on June 10.

Romania’s five-at-the-back formation and susceptibility to relinquish possession easily in dangerous areas meant Spain had ample space, opportunity – from which there were chances galore. They were dominant in the first-half and if not for Tatarusanu’s excellent saves, the hosts would have easily been staring down a heavy 5-0 half-time scoreline.

That they were only one-nil down was a positive in itself, such was the level of respect on show for their visitors. Spain were left frustrated by an inspired ‘keeper, who continued to pull off important stops even after Ramos broke the deadlock from the penalty spot – while there wasn’t much he could have done to stop either goal. 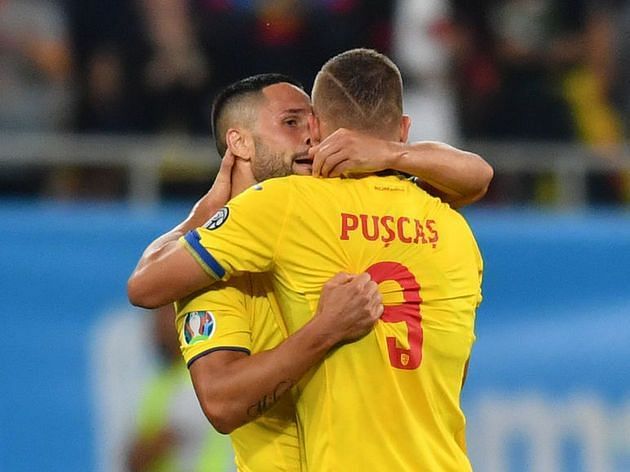 Romania’s persistent danger man George Puscas got his reward just before the hour mark for a tireless display, where he kept Spain’s backline busy on the counter-attack while continually posing a threat they needed to be weary of. The 23-year-old forward, formerly of Inter Milan, joined Reading for a reported £7m earlier this summer and started the season with some encouraging form – three goals in six games.

Although failing to add to his goal tally on this occasion, he created the assist for substitute and fellow centre-forward Andone from close-range. It was his clever header back across goal which gifted his teammate a golden opportunity to strike goalwards. Intelligent movement and precise timing near the far post saw him meet Romario Benzar’s cross and flick it into a dangerous area, with a booked Ramos slow to react and the Brighton striker (on-loan at Galatasaray) was a grateful beneficiary.

That proved as good as it got for Romania, who were much improved in the second-half and part of that stemmed from the introduction of substitute midfielder Ianis Hagi, son of legendary Gheorghe who watched on from the stands.

The Genk playmaker, 20, replaced Nicolae Stanciu and quickly asserted himself as one of their best players – three key passes (81% completion rate), three duels won, one tackle completed and with only 20 touches, he made his influence felt. His cleverly disguised free-kick should have produced a late equaliser and after an impactful display like this, it’s a real shame he didn’t start to begin with. If you combine his fearless nature and Puscas’ tireless workrate, Romania have serious potential within their young core. 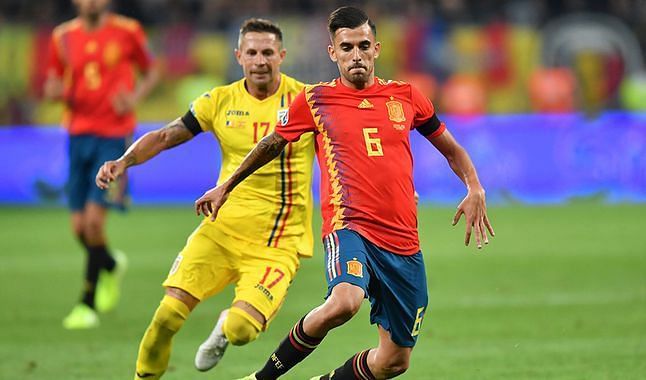 Currently on-loan at Arsenal, Real’s Dani Ceballos has endured a mixed start to the campaign. After excelling against Burnley, he was stifled against Premier League leaders Liverpool in their following fixture and questions have been posed: his technical ability isn’t an issue, but is he really that good though?

Well in response to that question, the jury is still out. Judging by this display, you can understand why his career seems like it’s at a crossroads and at 23, he should be doing more on a consistent basis.

Here, he wasn’t economical in possession against a Romania side who gave Spain too much respect in the early stages, had too many ineffective touches (90) without regular cutting-edge precision around the final third. Playing too conservatively infield saw him isolated, which can occur easily when being deployed on the wing – not his natural position – like he was.

Crucially, he earned the penalty but was actually in the way of an attempted pass meant for Alcacer rather than him, which typifies his overall display. Again he lived up to the low-pain threshold tag earned in recent seasons, going to ground too easily and winning free-kicks that were never really fouls.

Against better, more intelligent opposition, his reluctance to truly commit in duels will be preyed upon – just like against Fabinho and co at Anfield last month. Despite flashes of his individual ability, he again proved why Real have been reluctant to thrust him into a regular starting role and rather why he’s out on-loan in England, to prove he’s capable of more.

A prime example was his involvement in Spain’s second goal and subsequent activity afterwards. It was his defence-splitting pass that fed an overlapping Jordi Alba, who teed up Alcacer in open space, to double their lead. But aside from that, he was fairly quiet and ineffective for the remainder of the second-half before being replaced (75′) for PSG’s Pablo Sarabia. Why isn’t he more consistent? This was an interesting display, to say the least.