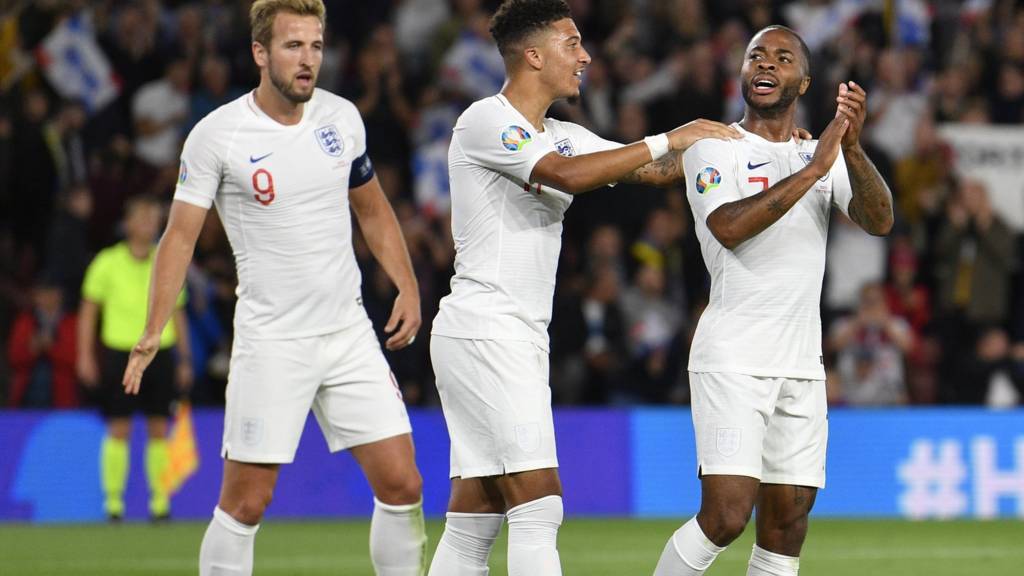 Goals from Harry Kane, Raheem Sterling, Mergim Vojvoda’s own goal and a brace for Jadon Sancho helped Gareth Southgate’s England to prevail in an eight-goal thriller against a determined but naive Kosovo display at St. Mary’s. After four Group A fixtures, the Three Lions top their Euro 2020 qualification group.

England found themselves behind after just 35 seconds, as Michael Keane’s mistake in possession was duly punished by Lazio midfielder Valon Berisha. The Everton centre-back soon atoned for his error though, as a headed flick-on set up Manchester City winger Raheem Sterling.

He headed home from close-range to equalise just seven minutes after as the hosts quickly found their rhythm. Harry Kane gave England the lead eleven minutes later, with a low and hard finish through Arijanet Muric’s legs at his near post. Their lead was soon doubled, as promising work on the flank from Sancho was rewarded after drilling a cross into the box, which Standard Liege right-back Mergim Vojvoda turned into his own net.

They refused to take their foot off the pedal before the interval, with Sterling and Sancho combining in transition to devastating effect. Raheem teed up the 19-year-old twice, to convert his first and second international goals at senior level just before half-time.

That handsome advantage should have been enough for Southgate’s men to cruise to the finish, though it was not without some panic. Berisha completed his brace to make it 5-2 after the break with an excellent strike, leaving Jordan Henderson in his wake after a perfectly-weighted pass by Vedat Muriqi.

Then, the Fenerbahce forward got himself on the scoresheet six minutes later from the spot. Needlessly hauled down in the box by a sliding Harry Maguire, he fired beyond Jordan Pickford’s best efforts to pose yet more questions of England’s defensive frailties. Kane had a spot-kick of his own thwarted by Muric and Sterling hit the post while Swansea midfielder Bersant Celina was agonisingly close to setting up a grandstand finish at St. Mary’s.

During a thrilling encounter on the south Coast, Kosovo’s 15-match unbeaten run has come to an abrupt end. It came against Group A leaders England, who are among the favourites for next summer’s tournament and is a performance they will take pride from, but equally frustration they couldn’t have done more to prevent defeat and earn a hard-fought away point at least.

Without further ado, here’s three reasons why England were 5-3 winners on this occasion:

#3 their Visitors showed them too much respect

Kosovo celebrate one of their three goals on an evening where they conceded five, but really shouldn’t have

Given their impressive unbeaten record prior to this fixture, Kosovo’s quick start wasn’t particularly surprising. England themselves have a few weaknesses that can be exploited, as evidenced by recent results against lesser sides.

But once you gift them an opportunity to get back into proceedings, so soon after scoring yourselves, you’re asking for trouble. Kosovo conceded five and really shouldn’t have, if they harbour aspirations of being an ever-growing European nation fearless of sides above them.

They played well in stages and worked hard, but that was only really evident once they had a deficit to overturn – rather than the other way around. It always felt inevitable that England would score at some stage, but the goals they conceded were largely preventable.

Take their first two goals, for example: the first came from a corner that was poorly defended, they had everyone in the box and yet when Ross Barkley’s delivery was whipped in, they all looked lost and were caught ball-watching.

6ft 3in Michael Keane was ready and towering to meet the ball, but couldn’t have asked for a better opportunity to atone for his prior error. Hellas Verona defender Amir Rrahmani was unaware, backpedalling and found himself jumped over in precisely the area he should have been marshalling.

If that was a soft goal to concede, Kane’s was even easier. They allowed England too much time and space in possession without making them uncomfortable and paid for it, but when your captain sprints to the halfway line and gets left for dead by an alert Sterling, what can you do?

Rrahmani was left looking naive as his defensive teammates were forced to try and delay, but Sterling sped through and fed Kane. One half-step shifted Vojvoda out of his striking range before letting fly, making no mistake to give England a 2-1 lead without getting out of second gear.

You could scrutinise all eight goals in the same manner, but the point here is that Kosovo defended poorly and made attacking even more straightforward for England on this occasion. It was like they didn’t do their homework and despite such a promising start, gifted goals against a nation who doesn’t need any help creating them. 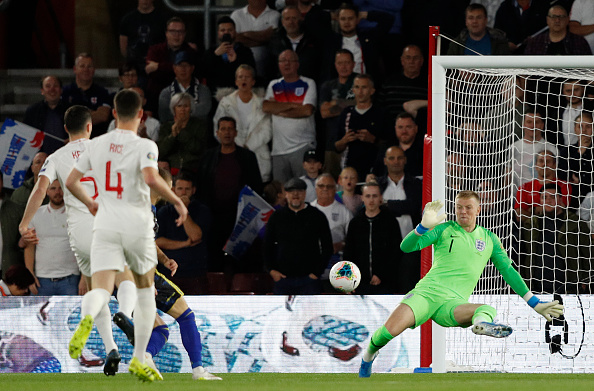 It’s never good to concede early in a match, let alone after just 35 seconds. But if anything, Valon Berisha’s composed finish shocked England into action and was a necessary catalyst for change as they quickly got themselves back into proceedings.

Southgate’s insistence on playing out from defence has both benefits and drawbacks, but the problem isn’t with implementing his playing style – rather doing it both accurately and quickly.

As evidenced by last season under Maurizio Sarri in west London, Barkley is stifled when playing in more of a deep-lying midfield role. Instead, the 24-year-old is better suited to playing further forward and being given a licence to roam forward, dribble and create chances for others.

The decision to field both Jordan Henderson and Declan Rice in this match seemed excessive, as both are defensive-minded midfield players during a game where England are expected to dominate. But having that duo sitting deep grants Barkley peace of mind to venture forward and help link midfield with attack – something Sterling often does – without shying away from duels.

Discontent surrounding James Maddison’s omission was justified, but rather than Barkley be sacrificed, the Leicester man should replace one of the aforementioned pair to help create in a similar capacity.

Before kick-off at St. Mary’s, the trio had combined to score 15 goals and create six more assists already for club and country this season. The 2019/20 campaign is barely a month old!

After goal contributions aplenty in this victory, the Sterling-Sancho-Kane trident is quickly establishing itself as one of the world’s best on the international stage. Kane the ruthless finisher, accompanied by two speedy wingers both capable of creating and scoring goals of their own, it’s a frightening prospect for opposition defenders to worry about.

No wonder they thrived against a Kosovo side who gave them too much respect, space to exploit and time to think about their next move three steps ahead.

Sterling danced his way through players, completing nine dribbles over the 90 minutes. Tenacity and a hunger to create was always on show too – winning 11 duels and possession on six separate occasions. With a goal and two assists, only the woodwork denied him from completing his brace.

As for assist king Sancho, he made history with a brace of his own here. The first player born in 2000 or later to score at senior level, it seemed only a matter of time before the Borussia Dortmund winger got himself on the scoresheet.

He also became the youngest to score two in a game since one Wayne Rooney against Croatia in June 2004 (18 years, 241 days). His decision-making and finishing ability continue to sharpen with experience, while he kept possession tidily (93.3% pass success), won four duels and possession in five instances himself.

Kane meanwhile, has received plenty of criticism in recent weeks for a few reasons: diving, his penalties or otherwise. Nonetheless, he continues scoring even at times when he might be drifting through games, which is testament to his ability as a proven goalscorer.

He understandably took more of a backseat role which allowed Sancho-Sterling to thrive in transition, though his close-range finish started a first-half blitz after Sterling’s earlier equaliser.

He too could have earned a brace after Barkley won a second-half penalty, but Muric’s excellent stop thwarted the 26-year-old on an evening where he reached 26 England goals with his 41st international cap. Only six players above him in the all-time list have a better goals-to-game ratio, with Wayne Rooney’s 53 very much achievable with the creative riches alongside him. So, spare a thought for Marcus Rashford, would you?