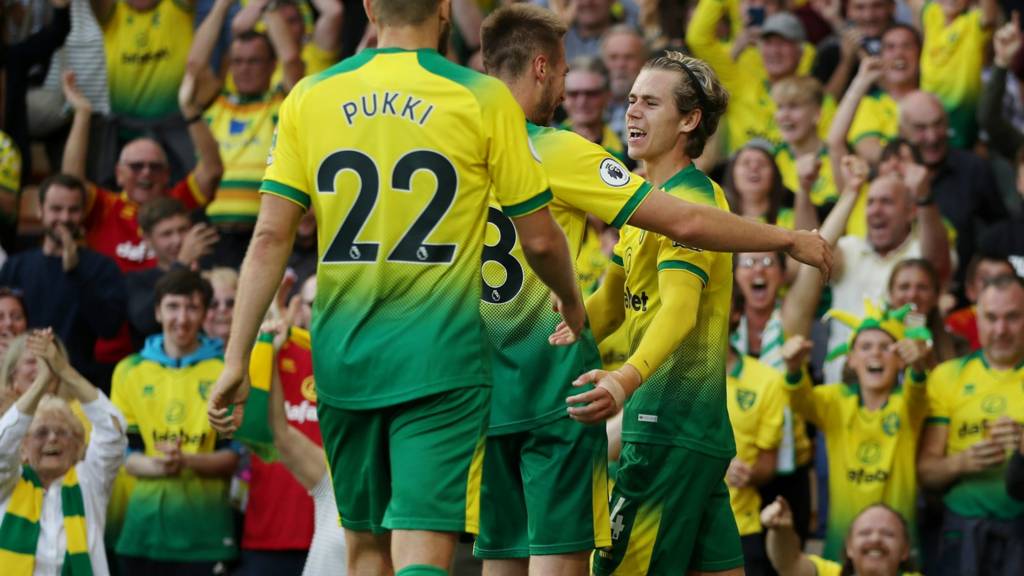 Newly-promoted Norwich have recorded their second league win of the 2019/20 campaign and did so with a hard-fought, deserved win against Pep Guardiola’s City side in Saturday’s evening kick-off. It’s the first loss City have suffered since a 2-1 away defeat by Newcastle on January 29 and despite squandering chances, being denied by the woodwork and more besides during a frenzied display, the visitors ultimately only had themselves to blame.

Scotland international McLean broke the deadlock with aplomb from Emiliano Buendia’s corner, heading home at the near post to take full advantage of sloppy marking and score his first Premier League goal. They doubled the lead on a devastating counter-attack ten minutes later, as midfielder Todd Cantwell applied the finishing touch after being selflessly teed up by top goalscorer Teemu Pukki.

Raheem Sterling hit the post with a leaping header, while Sergio Aguero – who missed an earlier chance – headed home just before half-time to halve the deficit, after a teasing Bernardo Silva delivery. Five minutes after the restart though, the Canaries’ two-goal cushion was restored in embarrassing circumstances.

Otamendi dithered in possession inside his own box after receiving a pass by centre-back partner John Stones, Buendia stole the ball from his blindside and teed up the grateful Pukki, who netted his sixth league goal of the season. Kevin de Bruyne’s introduction saw City intensify their efforts for another comeback, which looked increasingly unlikely as Norwich’s tireless defensive work proved key as time wore on.

Rodri opened his City goalscoring account from distance to make it 3-2 with two minutes and stoppages to play, though Aguero, Sterling and substitute Gabriel Jesus were all denied by Tim Krul in the dying embers. Without further ado then, here’s a look at five talking points from an unpredictable clash at Carrow Road: 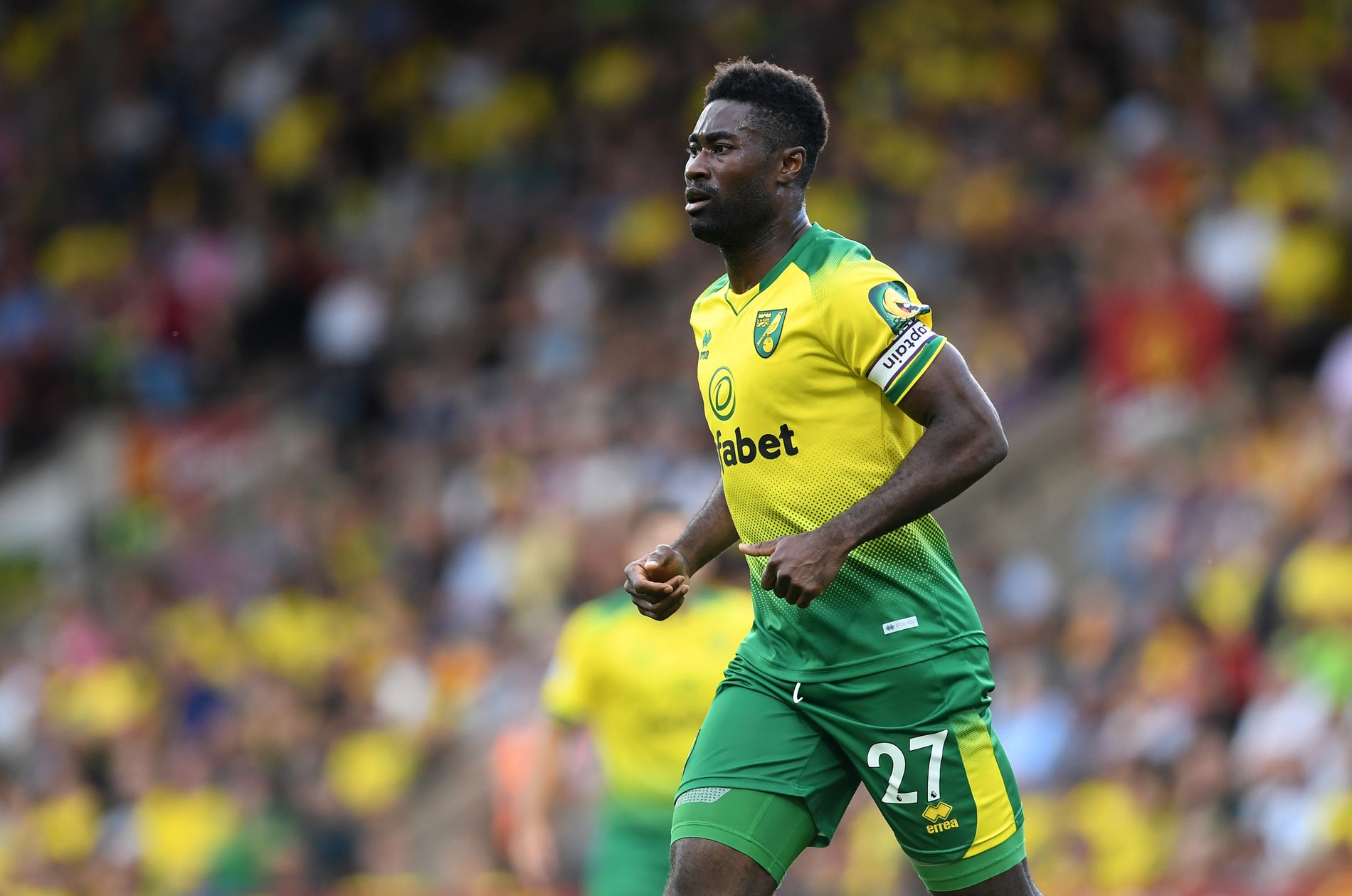 All the plaudits will go to Pukki, Cantwell and perhaps most of all Buendia for Norwich’s surprising win. That’s justified given their efforts, but there are also unsung heroes who will not get the credit their performances warrant after this victory.

Ibrahim Amadou, on a loan deal from Sevilla, made his first league start where injuries forced him to play an unfamiliar role at centre-back. He and captain Alexander Tettey – who himself hadn’t started since mid-February against Preston – were quietly effective against a Manchester City side who looked to probe their way through midfield with multiple pass combinations and patient build-up play.

They nullified the playmaking abilities of both David Silva and Ilkay Gundogan before the pair were replaced near the hour mark, while interchanging positions to cover for one another when City threatened in numbers. Amadou made a key challenge on Aguero who went in search of further goals after the break, while Tettey was alert and blocked the ever-present de Bruyne, who threatened immediately upon arrival midway through the second-half.

Out of possession they were not faultless throughout and occasionally guilty of ball-watching. Ultimately, that comes with the territory against a team of City’s quality and one who dominate possession as regularly as they do. Ever-present defensive figures, their composure and concentration under pressure was important from the get-go – setting the tone for an excellent collective effort.

#4 The Pukki train rolls on 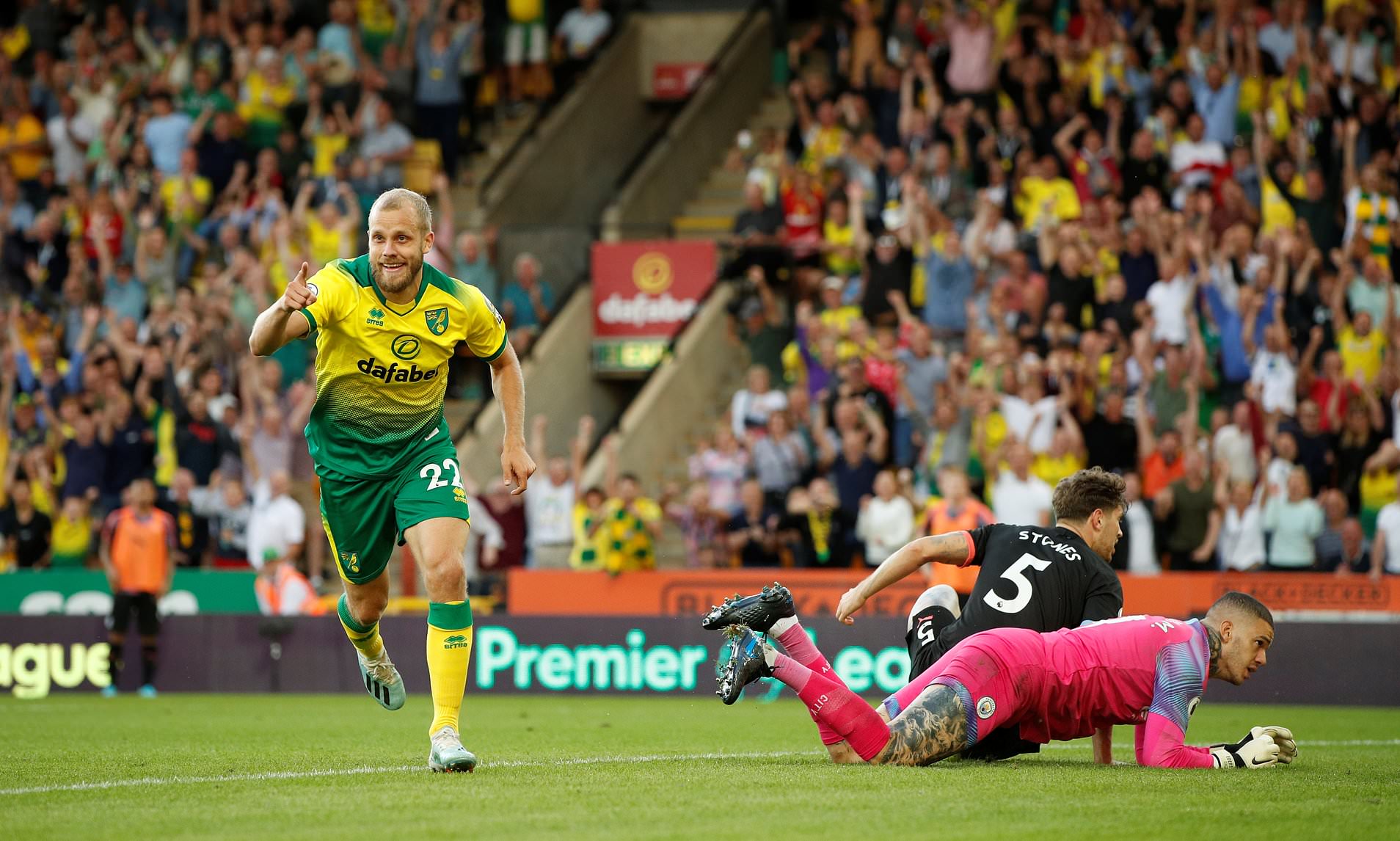 August Player of the Month Teemu Pukki continued his impressive form with an efficient all-round display against the champions: combining selflessness and attacking movement to good effect against a vulnerable City backline who were countered at will and struggled to cope.

He breached their defence after latching onto Marco Stiepermann’s pass, beat Nicolas Otamendi and Kyle Walker’s poorly-adjudged offside trap before shaping to shoot and teeing up an unmarked Cantwell to his left. He sold the ultimate dummy and after persistent off-the-ball work, got his own reward early in the second-half.

Otamendi’s horrendous mistake in possession gifted the ball to Buendia, who passed across into the Finland international. Having netted in successive games against Greece and Italy over the past week, the 29-year-old applied the finishing touch from close-range to restore Norwich’s two-goal cushion – a minute after skewing a promising counter-attack wide of Ederson’s far post.

He now has six league goals this term and with Norwich’s upcoming fixtures, he’ll be eagerly anticipating further success in the final third as Buendia and others aim to create chances galore.

Post-match, Pep Guardiola revealed that City’s main issue was not the individual errors leading to goals they conceded but rather a lack of urgency in attack. While urgency was admittedly a problem, the Citizens created ample opportunities to beat Norwich here.

If you looked closely at Raheem Sterling, particularly in the first-half, you could see the forward was getting increasingly frustrated. His penetrative runs down the left-hand side were not being met with purposeful passes often enough, instead sideways and rather safe distribution was a common theme from the early exchanges.

Their patient build-up tactic was a little too laboured, allowing Norwich the chance to defensively regroup in numbers. That saw Norwich’s confidence levels increase. Their players were buoyed by a vocal Carrow Road crowd aware City were, at the very least, there for the taking. Kevin de Bruyne on the bench, Sterling and Sergio Aguero seemingly isolated for large periods, their belief was justified.

Despite his best efforts, Raheem didn’t score or assist for the second successive league game. In hindsight, he should have at least notched two assists and a goal. His excellent deliveries into Aguero went unrewarded, despite the Argentine making history – courtesy of Bernardo Silva – by becoming the first player to score in five consecutive top-flight matches. He’s now level with Chelsea’s Tammy Abraham (7) in the goalscoring charts, but really should have more.

Sterling struck the woodwork with a leaping header in the first-half, saw a promising effort from distance fly past Tim Krul’s far post before being thwarted by the experienced Dutchman late on. It wasn’t to be his day, or that of Aguero – who scored one but could’ve had a hat-trick himself too.

#2 Buendia stands out with excellent showing on both ends

Buendia’s blossoming partnership with Pukki was on show, as he shone throughout

We’ve already witnessed flashes of the Argentine’s creative brilliance to begin the campaign and reserved his best performance thus far for their toughest opponent.

In little under 450 minutes, he’s completed 13 dribbles and key passes apiece as the creator-in-chief within a Norwich side many have tipped for relegation this season. Following this latest showing, only Kevin de Bruyne (5) has more than his four assists while he doesn’t shy away from defensive responsibilities either.

There were instances second-half where City overwhelmed their hosts with waves of pressure, even two goals down. Buendia was eager to harry them into mistakes, working relentlessly out of possession – highlighting both his awareness and work ethic before being substituted to a standing ovation after sustaining a knock late on.

It was certainly an evening to forget for Otamendi

In City’s first game since Aymeric Laporte’s successful knee surgery was confirmed, they looked increasingly vulnerable at the back and were shaky defending against counter-attacks too.

If ever there was a match highlighting the Frenchman’s importance at the heart of their backline, it was this one. The Otamendi-Stones pairing has never truly appeared convincing and while the England international made his return after a month-long absence, he was never going to be helped by the overly aggressive Argentine alongside him.

It was this impulsive defending which proved pivotal for their second goal, as he strayed forward and was caught out of possession on the counter. The pass into Pukki should have been cut out in its tracks, instead Otamendi frantically sprinted back attempting to recover his error. By then it was too late.

If that was bad, Norwich’s third was gift-wrapped by the Argentine. Stones passed across the box into his path and after dithering in possession, he looked lost and had his hands up with apparent confusion after Buendia reacted quickly to cleanly win the ball back from behind.

Pukki wasn’t going to miss from there and City suddenly found themselves with another two-goal deficit to overturn just minutes after the restart. Walker was again exposed defensively, Zinchenko didn’t look comfortable and Stones wasn’t exactly covering himself in glory either.

It’s certainly worrying for the defending champions, who lost influential captain Vincent Kompany to Anderlecht this summer and Laporte will not be fit again until January or February at the earliest.