Far from pretty, a more competitive scrap than most expected but Tyson Fury importantly came through victorious with a unanimous decision win (116-112, 117-111, 118-110) against spirited Swede Otto Wallin, who was unbeaten in 20 previous fights before their clash in Las Vegas.

After all the pre-fight theatrics commemorating Mexican Independence Day weekend in Las Vegas, Fury got what he wanted: a proper battle against a fearless opponent who clearly did his homework and stifled the 31-year-old’s tactics from the first bell.

Waiting patiently for nearly ten minutes as Fury soaked up the atmosphere helped his case, as the Swedish underdog was immersed in the biggest bout of his professional career just months after his father tragically died from a sudden heart attack. 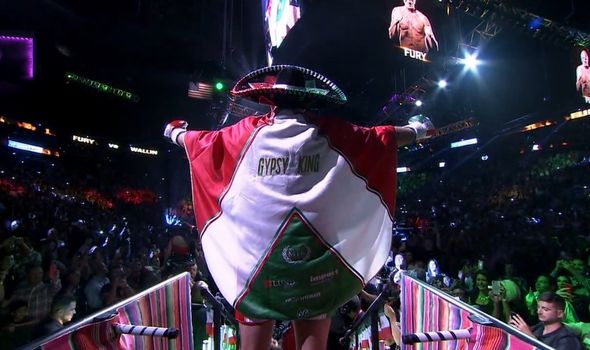 In the pre-fight presser, Fury said he wanted a war. After starting sluggishly that wasn’t immediately obvious though Tyson soon found himself embroiled in a bloody, grisly one.

The first two rounds were fairly close but Wallin was ahead, asserting confidence and poise in the main – complete contrast to Tom Schwarz’s display back in June.

He didn’t just last longer than two rounds, he landed a perfectly-placed left hand flush in R3 and created a big gash just above Fury’s right eye. As the commentators insisted, the Swede was here to win.

Fury looked calculating but equally weary and somewhat stunned in R4, though the pair continued to wrestle for ring control. Wallin was successful with his jab and started targeting the body to open up Fury’s head, while testing just how good the Brit’s head movement really was.

Tyson’s vision was naturally affected by the cut and as he kept fidgeting with it, things were not getting any better. That only served as a constant reminder for Otto to push the pace and really target the exposed weakness: which continued to worsen despite cutman Jorge Capetillo’s frantic work between rounds. If the cut had been sustained by any other boxer, the bout probably would have been ended. No accidental headbutt, illegal action or otherwise meant the decision would have been Wallin’s stoppage.

Fury responds defiantly, cut and all

Instead though, Fury powered through with rugged determination and was motivated to do more in the later rounds, especially after a medical intervention assessed how badly his vision was impaired. Even though he couldn’t see properly, his defiance was clear to see in his boxing style. Persistent with his punch output, he set up combinations and exploited a tiring Wallin while beginning to assert the control expected of him in early rounds beforehand.

Just as R6 ended, Otto used some underhand tactics of his own to incense Fury and his corner. It was blatant, raking the exposed cut with his glove unprovoked. An unwelcome nuisance, he regularly looked to clinch and stifle Tyson’s flow whenever he threatened to set up a flurry of punches. Despite having the right idea, it was misplaced. Instead of frustrating Tyson, Wallin was merely compromising his own chances of winning rounds against a 6ft 9in opponent content to wear him down physically.

Wallin was purposeful and determined but as time wore on, struggled

Otto was slowing down but continued to punch, though his lack of late-round experience was evident. He had only gone the distance in one of 20 fights prior to this, which is remarkable given the circumstances. His gameplan had seemingly evaporated and Fury used the cut to his advantage after getting accustomed to the changes he needed to make.

Valiant effort but Fury’s ringcraft proves too much

Closing the striking distance meant Otto couldn’t land as effectively or with variety either, while Fury was energised and beginning to land some devastating combinations. Wallin showed good agility and ring awareness to survive R9, after almost being floored twice in quick succession and absorbing a stinging uppercut.

Fury’s conditioning and shot IQ were apparent in the final three rounds, as he picked his moments with renewed patience. Increasing confidence he had the job done was clear, though Wallin bobbing and weaving saw him continue to survive. Survive, rather than recover and develop a second wind, was key there. Otto began R11 with body shots that were successful early on but struggled to sustain it as Fury continued wearing him down.

An impassioned speech from the 29-year-old’s corner came, making him aware that only three minutes remained in the biggest fight of his career to date. Unsurprisingly, he came out aggressively and with intensity levels a neutral would have been hoping for a few rounds prior.

He stunned Fury with a stinging punch and as the Brit began to stumble, the round typified heavyweight boxing at its most unpredictable point. One delicately landed punch can be the difference between winning and losing, not least when you have such heavy hands. The momentum shifted but Otto’s efforts were ultimately in vain, as the final bell sounded and both men celebrated – for different reasons – to end an entertaining, unpredictable battle that few expected to witness.

Wallin was in reflective mood after the scorecards confirmed he suffered the first defeat of his career, although against the toughest opponent, he did himself proud.

“I didn’t even hear the scorecards, I did my best but Tyson is a great fighter. I tried to hit it even more [the cut] but wish I could have hung in there longer. This just proves that no-one can question that I’m a good fighter.”

The 29-year-old is reportedly poised to strike a multi-fight deal off the back of this performance, where he’s likely to feature again in the US and more mainstream TV bouts.

He outscored Fury 55-36 in body shots, landed 38% of his total punches and 50% of attempted power strikes too – against a sluggish starting Fury who threw more without as much success in the early rounds.

Tyson knew as much, praising his opponent for his cliche Viking spirit and more:

“It was a good performance, I got twelve rounds in and Otto was a tough opponent. Rest in peace to his father, he’d be very proud of his son here. It was a completely different fight after the cut but [recovering to win] it’s all about heart and determination. Deontay Wilder, I want you next bum! February 22.”

It’s unrealistic to suggest Fury-Wilder II will take place on that proposed date now, such is the severity of Tyson’s facial cut(s), how he’ll require several stitches and ample recovery time before returning to fight camp – presumably in the New Year.

Wilder is expected to face Luis Ortiz in a rematch of last year’s frenetic battle, at some stage in November. That date is yet to be confirmed, though the WBC heavyweight championship pathway for Fury is clear now even the specifics are not.

Both Wilder and WBA, IBF, WBO and IBO champion Andy Ruiz Jr had their say on an underwhelming Fury victory here, though it’s reactionary and to be expected. Time will tell whether the pair can do any better in their upcoming bouts.