Carlo Ancelotti’s Napoli inflicted European champions Liverpool’s first defeat of the campaign in all competitions, as Dries Mertens’ penalty and stoppage-time strike by substitute Fernando Llorente saw them snatch a 2-0 win to kick off Group E in this year’s UEFA Champions League.

During an entertaining matchday one clash between the defending champions and a familiar foe from last season, there was little to separate the pair.

Napoli’s club-record signing Hirving Lozano thought he broke the deadlock seven minutes in, but was correctly ruled offside after Adrian’s double save thwarted Fabian Ruiz moments earlier. Sadio Mane and Roberto Firmino both came close before half-time, while Adrian made an excellent acrobatic stop to deny Mario Rui’s effort from swerving into the top corner.

Alex Meret did well to tip a stinging Mohamed Salah effort around the post, before Andrew Robertson conceded a needless penalty with nine minutes to play. He lunged in and didn’t win the ball when challenging Jose Callejon, who went down and referee Felix Brych had no choice.

Mertens made no mistake from twelve yards, despite Adrian’s best efforts, before a defensive mistake by Virgil van Dijk gifted substitute Llorente a stoppage-time finish to secure all three points during a tense finale. Without further ado, here’s a look at five hits and flops from a memorable evening of football in Naples: 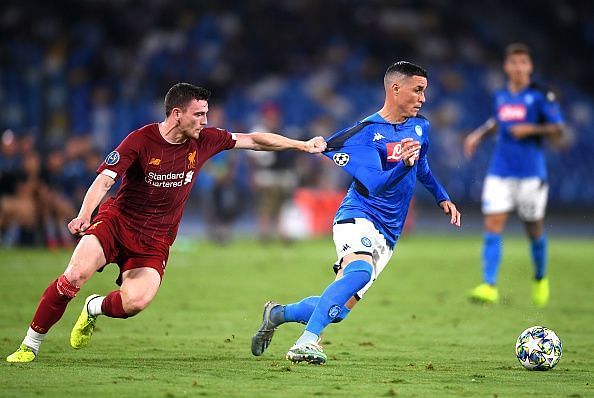 Perhaps this shouldn’t be too surprising, given Robertson was a fitness doubt (knock) for this fixture to begin with. Appearing a step slow at times from the early exchanges, he didn’t regularly come out victorious during his battles against Callejon and Mertens down the flank.

In addition, the Scotland international failed to attack with the same relentlessness we often see from him and Trent Alexander-Arnold in the Premier League. Napoli had done their homework and effectively nullified Liverpool’s width, though his defensive work wasn’t immaculate.

When he did fly forward, there was seemingly no understanding between himself, Fabinho and Firmino in transition. As time wore on into the latter stages, his game was compounded after committing a careless, tired challenge in the box under pressure. Although you could argue the contact was minimal, he gave Callejon an opportunity to go down and didn’t actually win the ball so really could have no complaints. His subsequent reaction spoke volumes.

He created an assist and had a decent display last time out against Newcastle, though his start to the campaign has been unspectacular. The 25-year-old will certainly be eager to atone for his forgettable display here, as they travel to west London with Chelsea up next on Sunday. 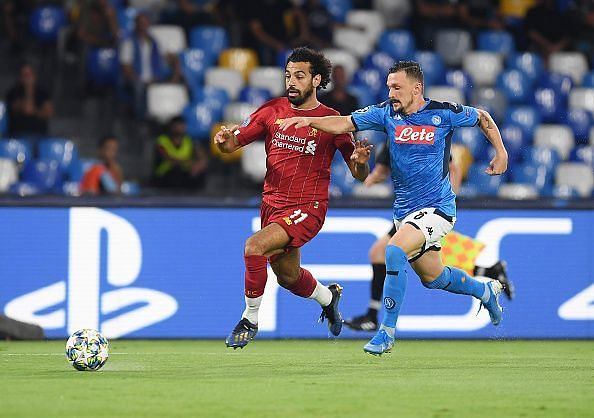 Mario Rui was persistent with his defensive work and importantly, stood tall when called upon. Doing consistently well to isolate Mohamed Salah for sustained periods, his distribution in possession (85.7%) was solid.

In addition, he recovered well whenever the Reds pushed forward on promising counter-attack chances and was intelligent enough not to be rash with his tackling nor take the proverbial bait against a side who know how to force defensive mistakes with seeming ease at times.

He came close with a curling effort, forcing an excellent save from Adrian while the scores were goalless – and relished the battle against one of the world’s best attacking tridents, passing with flying colours. As for his match stats, they speak for themselves: he won possession eight times, had four interceptions, one key pass, duel and clearance completed. 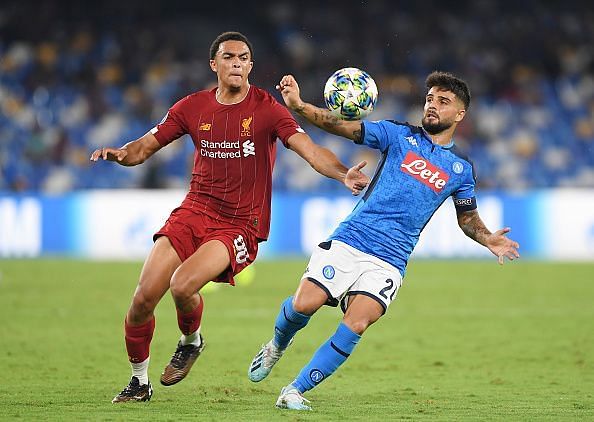 Insigne failed to take advantage against Alexander-Arnold, who was there for the taking at times

Contrastingly, this was an evening to forget for Lorenzo Insigne. Although his side won late on, he started slowly and was largely on the periphery throughout.

Matched up against Trent Alexander-Arnold, it’s obvious the 20-year-old fullback hasn’t truly shone defensively against dangerous attackers – despite his unrivalled creative abilities. With that in mind, Insigne should have done more with the half-chances he fashioned before being replaced midway through the second-half, unsurprisingly, for central midfielder Piotr Zielinski.

It speaks volumes that when under pressure, the 28-year-old regularly passed conservatively and took few risks. Rather than knuckling down and utilising possession more productively, he regularly cut a frustrated figure and complained to officials, particularly when he struck a shot goalwards which hit Alexander-Arnold early after the break. All-round, this was a frustrating showing from someone with much more ability than he showed on this occasion.

Despite completing two key passes, he lost possession eleven times and was caught offside twice. For context, the Italy international only completed 19 passes (86.4%) and had 35 touches. 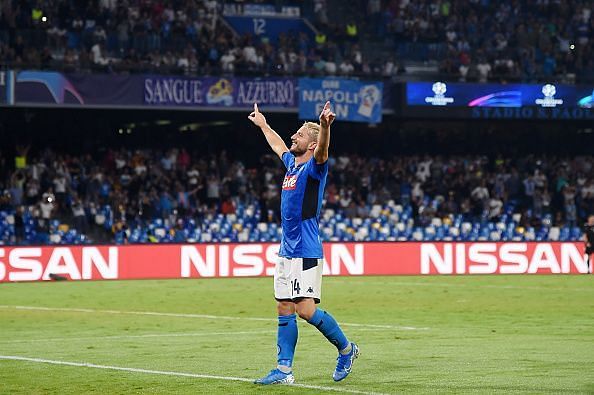 Dries Mertens hammered home an all-important spot-kick, which was the least his industrious work deserved over a testing 90 minutes here. Who knows what might have happened, had he missed or seen his penalty saved by Adrian there?

This was an uncomfortable game where the Belgium international needed patience and not to shirk responsibilities, playing away from his favoured centre-forward role while maintaining discipline for sustained periods off-the-ball.

His attacking movement was good, though he didn’t receive the ball as regularly as he would have liked in dangerous areas. That was, until the game was stretched late on and the 32-year-old was given the licence to gallop forward in transition, carrying the ball forward while scanning for available teammates.

Crucially though, the experience forward refused to hide or go into his shell like Insigne did and it would have been easy to. Two key passes, seven duels won, won possession on five occasions with one tackle and their important opener late on. 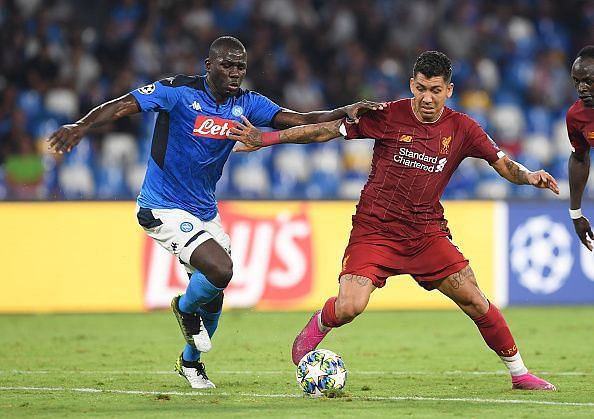 Koulibaly was immense as usual for a Napoli backline who were unsurprisingly tested by Liverpool’s frontline. However with the towering Senegalese international marshalling the hosts’ defence, you could see Klopp’s men consciously taking that extra half-second in possession and he was motivated by that.

Completing countless interceptions and ball recoveries over the 90 minutes, he thwarted Mane and Roberto Firmino in particular regularly while timing his aggressive flurries into midfield well during a match he certainly needed to.

He hasn’t played alongside new acquisition Kostas Manolas too often and their differences in defensive style were apparent – something to watch out for, as there were a few heart-in-mouth moments when Liverpool had sustained attacking pressure.

If you didn’t already know, it’s individual displays like these which justify why Napoli rate him so highly and why most of Europe’s top clubs are tirelessly linked with his signature. He prevailed in the battle of world-class defenders against UEFA Men’s Player of the Year winner Virgil van Dijk!