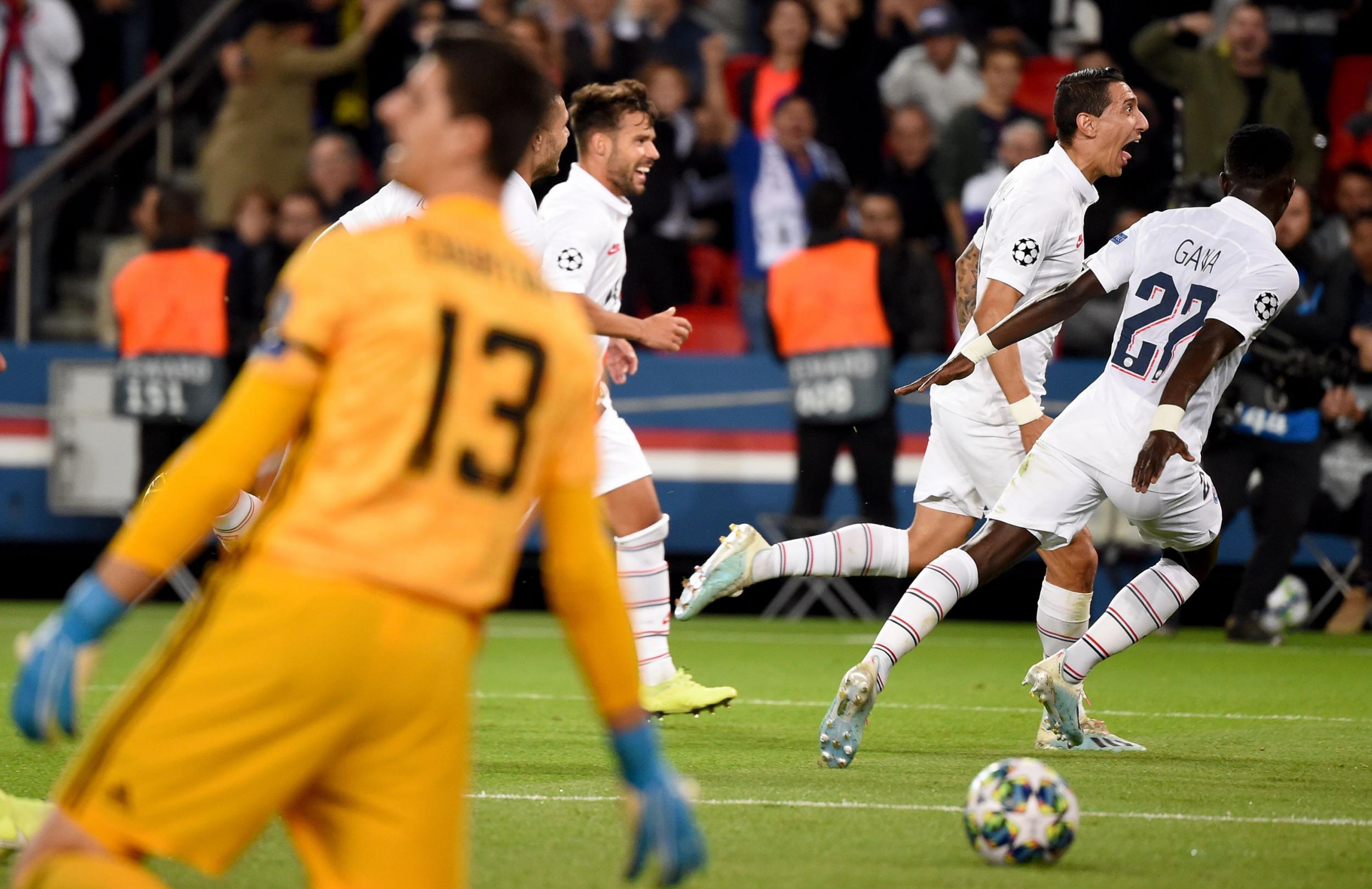 A weakened PSG side stunned 13-time European champions Real Madrid with a 3-0 home victory to kick off Group A in this season’s Champions League group stages, courtesy of a well-taken Angel di Maria brace and Thomas Meunier’s close-range finish in stoppage-time.

PSG were without star trio Neymar, Kylian Mbappe and Edinson Cavani – all sidelined with respective injuries – as their squad depth was tested against an unpredictable Real side, who also had key men sidelined for this fixture.

Di Maria, who spent x years at the Bernabeu, netted two first-half strikes to gift Les Parisiens a solid lead before the break. Moments change games and things might have been different had Gareth Bale’s stunning volley not been correctly ruled out for handball.

Referee Anthony Taylor’s intervened after VAR review showed the ball brushed his arm while attempting to control before striking over former teammate Keylor Navas. Bale, who has started the season in fine goalscoring form, came close twice more in the first-half while Eden Hazard also threatened at times.

Di Maria could’ve had his hat-trick after the hour mark, but chipped narrowly over the bar before Pablo Sarabia squandered a golden opportunity minutes later. Karim Benzema had a goal ruled out for offside, before the Frenchman headed narrowly wide as time wore on and the visitors’ hopes of recovering a positive result lessened.

Their fate was finally sealed in stoppage-time, as Thomas Meunier capitalised on a mistake in possession to counter with speed and opposite fullback Juan Bernat galloping forward alongside him. Bernat teed up Meunier to score the third Champions League goal of his career, with Real defenders nowhere to be seen and compatriot Thibaut Courtois helpless.

PSG were emphatic winners without many of their star men, which will have damning consequences going forward for Zidane unless he can recover their troubling situation accordingly in future. Here’s a look at five hits and flops from a memorable night in Paris: 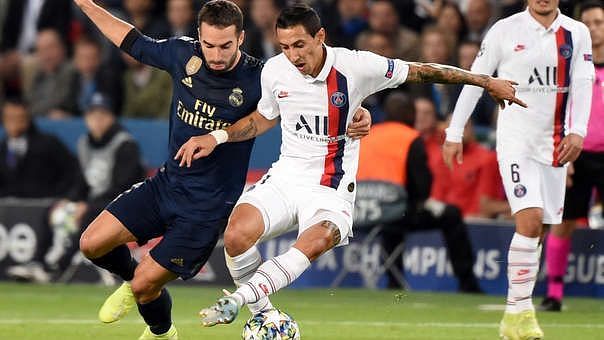 Carvajal endured a tricky evening’s work, one not helped by minimal midfield support and overlapping runs

Carvajal hasn’t looked at his world-class best in recent seasons against top opposition and again, this was the case here. It didn’t help matters that he lacked regular midfield support from Toni Kroos nor James Rodriguez out of possession which was quickly apparent.

PSG duly exploited that weakness, continuously exploiting the spaces in-behind him with timely overlapping runs. His role in the hosts’ first and final goals were damning, while he couldn’t afford another poorly timed challenge after being booked midway through the first-half.

For the opener, Bernat and Mauro Icardi combined with a swift one-two beyond the 27-year-old, who found himself quickly chasing shadows moments after Raphael Varane’s poor partial clearance. He couldn’t cut out the pass to di Maria in time, whose swift strike caught Courtois out at his near post, where the goalkeeper probably should have done better.

Ball-watching and out of shot for Meunier’s goal, it rather typified his overall display. While not solely at fault, there was much more he could and should have done differently to avoid being caught out on a stage where subtle mistakes are magnified and highlight supporters’ eagerness for Achraf Hakimi’s (on-loan at Dortmund) return to Spain, where he’ll have a fair chance and aim to provide fierce competition at right-back in the not-too-distant future.

Bernat ran tirelessly down the left-hand side and proved an unwelcome nuisance for a lethargic Real backline to contend with, as they struggled to cope against the hosts in numbers.

Toying with them in transition, he combined on the counter-attack before teeing up Meunier to apply the proverbial icing on the cake during their 3-0 win. His only real blemish on the evening was courtesy of an overzealous sliding challenge on an onrushing Carvajal near the area in stoppage-time, where the Spaniard was rightly booked and could have no complaints.

Two assists, he didn’t shy away from his defensive abilities: nine duels won, two clearances and interceptions, was fouled three times and had four successful dribbles to his name. With a much-deserved clean sheet despite some precarious moments, it’s clear he’s playing with more confidence and freedom than during the latter stages of his four-year spell at Bayern. 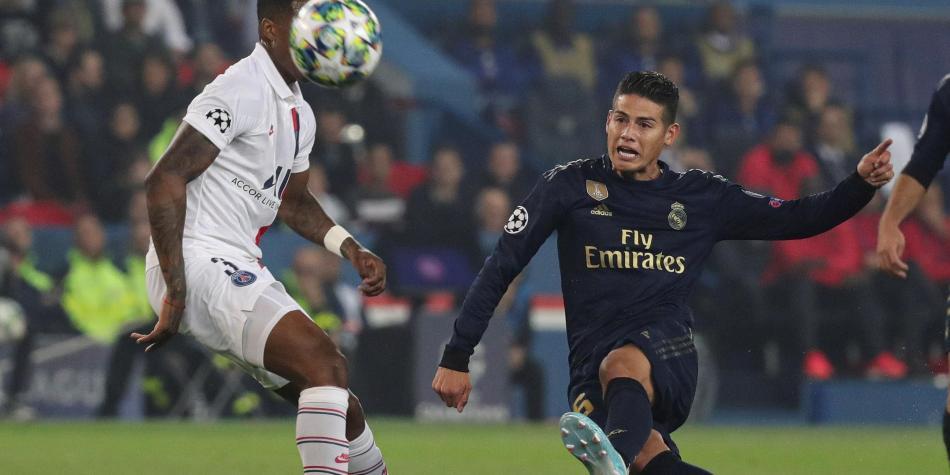 James flattered to deceive, proving again why he must play further forward, rather than as part of a midfield trio

Following an impactful display during their weekend win over Getafe, you could be excused for expecting better from the Colombian playmaker against better opposition here. Instead, James Rodriguez was largely ineffective and for sustained periods, fairly anonymous.

Kept quiet and disappointed in duels against someone of Marco Verratti’s tenacity and Bernat’s awareness levels, the same could be said for his off-the-ball work too. He did little defensively, losing possession eight times, was dribbled past on three occasions while failing to grant Carvajal adequate support on the right before being hooked after 70 minutes.

He must play further forward in a number ten role because games like these prove with experience, he lacks the discipline required to confidently play in a three-man midfield. Over the last two seasons at Bayern, his best work was done in a more advanced role so Zidane will need to tweak his position, if he’s to have long-term success with Los Blancos going forward.

Gueye was excellent on his first Champions League appearance since 2012

Idrissa Gueye has long made clear his intentions of playing at the highest level, against the world’s best players. So after securing a £27m switch from Everton this past summer, it was always going to be interesting to see how he fared against highly-esteemed company.

If this was the acid test, he passed with flying colours. Excelling in midfield alongside Marco Verratti, he worked hard throughout and immediately made his intentions clear from the first whistle. His first Champions League proper appearance for seven years from his spell with Ligue 1 counterparts Lille, incessant pressing and an innate ability to sense danger has never been questioned as part of his repertoire.

Instead, the Senegal international’s confidence continued to build as time wore on and utilising that to good effect, he kept passing tidy (69 passes, 93.2% success) while delivering an energetic display against a Real midfield who couldn’t contend with him.

His role in di Maria’s second goal was pivotal, completing a one-two with Marquinhos and beating Kroos to the ball before teeing up the Argentine. Two touches later, the ball flew into the bottom corner.

It was subtle moments of invention like these which many aren’t accustomed to seeing from the 29-year-old, often shackled in more of a defensive-minded role at Everton over recent seasons. However with Blaise Matuidi still not adequately replaced in Paris since departing two summers ago, the Ligue 1 champions will hope Gueye can be the man they’ve been longing for. 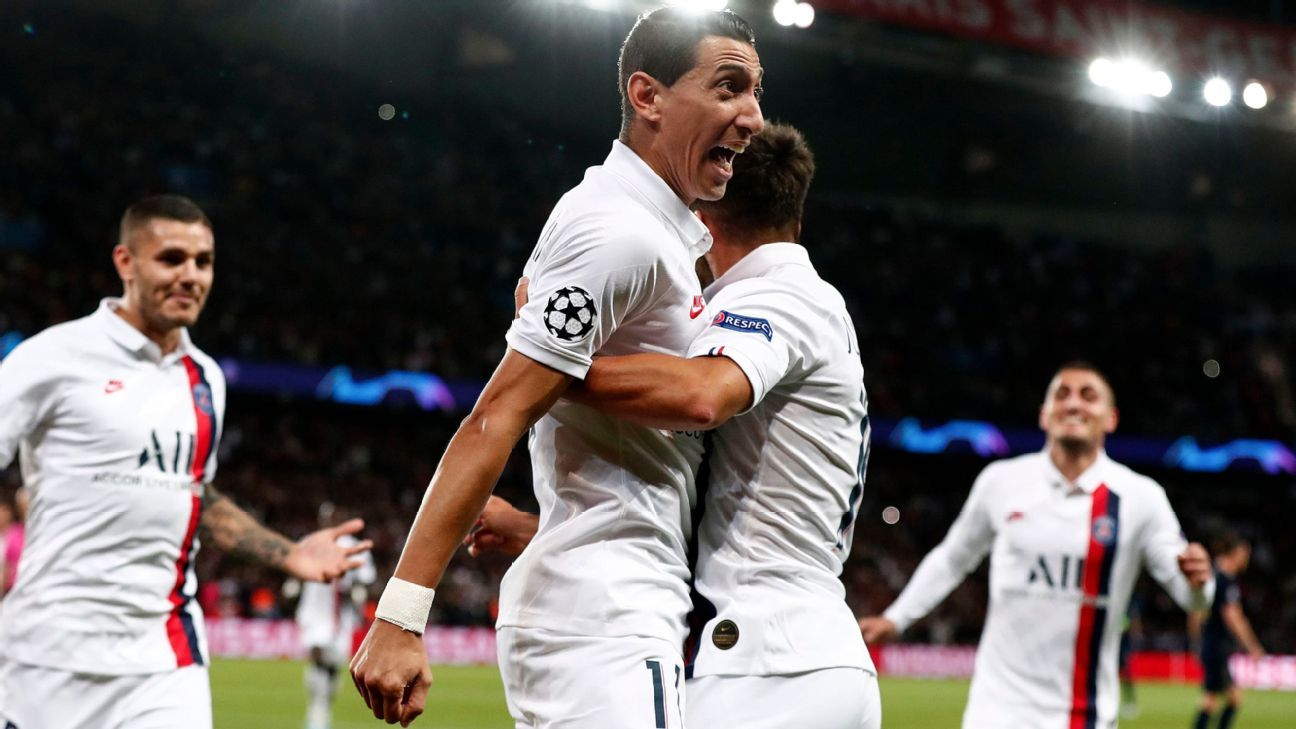 Di Maria excelled with an inspired attacking showing against his former side, when the Argentine’s quality was needed most

Angel di Maria broke the deadlock with a clever close-range finish, doubled PSG’s lead with an even better strike and probably should’ve had a hat-trick and assist for his electric work before full-time on this occasion.

Instead, the experienced Argentine forward will have to settle with a well-taken brace – though his influence could not be understated during a match of fine margins. In hindsight, Courtois probably should have done better to thwart his first-time strike at the near post – although being harsh is the high standards Thibaut prides himself on, being one of the world’s best goalkeepers.

Despite that, he could do nothing to thwart di Maria’s stunning strike on the edge of the box. It arrowed into the bottom corner, though questions again have to be asked of Real’s backline, who allowed him time and space to shoot from distance – not a smart decision given the 32-year-old’s tendencies to score screamers in his career.

He overcooked his chipped effort wide under pressure and minutes later, danced past a handful of Real players unchallenged into the box. Having set up Pablo Sarabia, the Spaniard ultimately squandered his chance while Angel himself got booked for petulance after reacting angrily to a poor challenge on a teammate late on. The only blemish on a successful evening, this was an exciting display from one of PSG’s true unsung heroes.