Newly-promoted Granada were surprise 2-0 winners over defending La Liga champions Barcelona on Saturday evening, confining Barca to their worst season start for 25 years in the process.

Ramon Azeez’s opener after just a minute, coupled with a coolly dispatched Alvaro Vadillo penalty in the second-half, means the Spanish champions have only taken one point from their three away games to start the 2019/20 campaign.

In addition, Ernesto Valverde’s men have failed to win any of their last seven away fixtures across all competitions while a half-time double change – teenage sensation Ansu Fati and a less-than-100% talisman Lionel Messi couldn’t help inspire them into a comeback.

The result sees them top La Liga on goal difference after Atletico Madrid’s goalless draw against Celta Vigo earlier in Saturday’s action, while they are guaranteed a top-four place before matchday five is complete as Real Madrid and Sevilla feature in Sunday’s evening kick-off.

Without further ado, here’s a look at five hits and flops from another surprising result in Spain’s top-flight – adding further pressure on Valverde after another underwhelming Barca display: 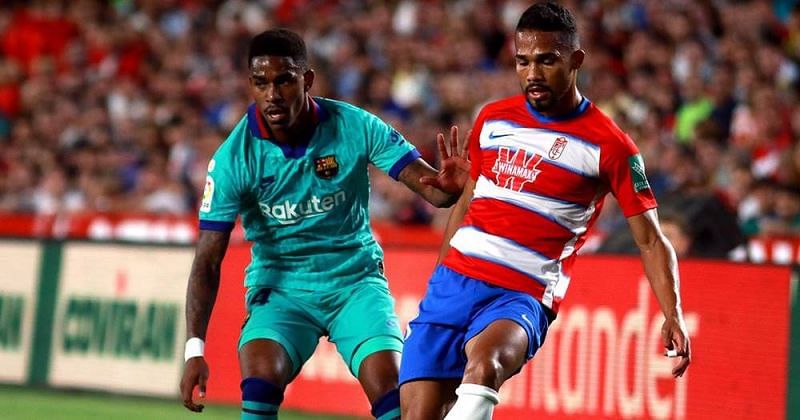 Firpo was underwhelming against Granada and unsurprisingly hooked at half-time, in his first Barca start

In a match of such fine margins, defensive mistakes are often magnified and made to look worse than they actually are. But when you’re making your first Barcelona start away from home against a fearless, newly-promoted side with nothing to lose, there are some things you just cannot do.

One is to dither in possession in your own third, another is to not adequately recover after making the initial error and instead gifting the hosts an opportunity to break the deadlock. Spain under-21 international Firpo, who joined last month from Real Betis for £16.5m, couldn’t have dreamed of a nightmare start worse than this one on his first competitive start under Ernesto Valverde.

He turned his back to shield the ball and ended up being effortlessly dispossessed by an alert Roberto Soldado, who held up play momentarily before teeing up an overlapping Antonio Puertas. He outmuscled the 23-year-old in transition and left him for dead before firing across goal, which an opportunistic Azeez flicked home.

1-0 down after just 63 seconds, Barca were rightly stunned and failed to adequately recover. Instead, they had an excuse to cower into their rigid shell, playing conservatively and passing often without a real cutting edge in the final third.

Despite making two tackles, winning six of his nine duels and recording one clearance in 45 minutes, the damage was already done. Unsurprisingly, he was hooked at half-time as Valverde made a double substitution and looked for an immediate response. 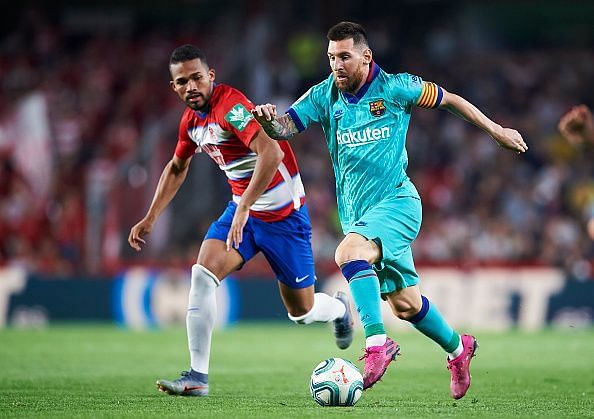 A toss-up between himself and Frenkie de Jong, it seems rather typical that despite only featuring for 45 minutes while clearly not 100% match fit, Lionel Messi was Barcelona’s best player.

Therein lies the problem. Messi’s calf injury was worse than first feared and naturally, the club have been cautious in dealing with the issue – one that is to the detriment of the team’s balance. Nonetheless being the talisman he is, the Argentine maestro refused to make excuses and after an encouraging but not faultless display in midweek, he featured for slightly longer here.

Operating in somewhat of a free roam role between midfield, where Ivan Rakitic previously was, and attack, it allowed the 32-year-old regular touches on the ball as he looked to create chances at will.

Although there’s an understanding blossoming between himself and fellow substitute Ansu Fati, the same couldn’t really be said for many other teammates during this one. His 71.9% pass completion rate was a team-low, though that comes with the territory when you play as many high-risk, high-reward passes as Messi tends to.

He created two key passes and completed four successful dribbles, both of which were more than any other player on the pitch over the 90 minutes. It was a recurring theme though that his attack-minded teammates failed to capitalise, as they created more with their talisman in tow. 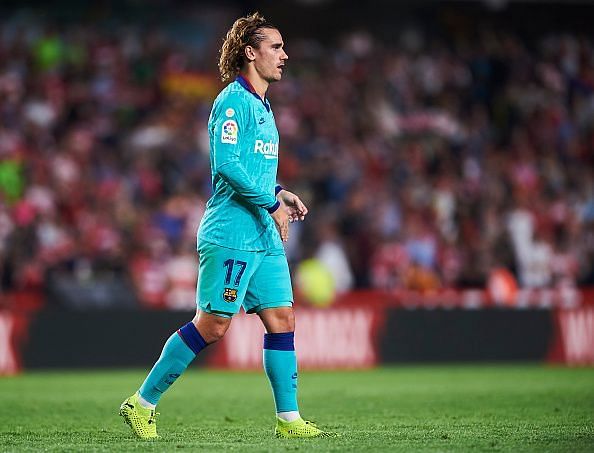 Griezmann endured another forgettable display, this time away at Granada where he was largely anonymous

Speaking of teammates who failed to capitalise, Griezmann again was a frustrating figure to watch in precisely the type of game Barca signed him for – to lessen the creative load on Messi, while asserting his capability to take over from an increasingly sloppy Luis Suarez in attack.

For the second successive fixture, the World Cup winner has been essentially anonymous in the final third and despite flashes of his individual brilliance, the transition to Valverde’s system at Barca hasn’t been an easy one to settle into.

Operating on the left-hand side of his preferred 4-3-3 formation, he failed to register a shot on target, complete a key pass or dribble over the 90 minutes. If those match statistics don’t speak for themselves, I’m not sure what will.

A lot is said about his attacking positioning, movement and whether he’s being played out of position – all of which is justified. But he drifted in-and-out of the game and again struggled to make his presence felt in the grand scheme of things.

So much so that when Fati was introduced to start the second-half, I can remember him doing more – even without the end product – than Griezmann over the full match. Carles Pérez was replaced, but it could have easily been their big-money summer signing too, had Valverde not got his personnel wrong from the start. 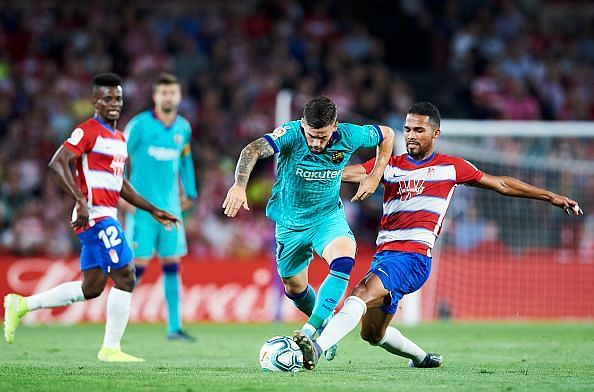 An all-action midfield display was on show from the young Venezuela international, currently on-loan from Manchester City. Yes, you read that correctly. The 21-year-old relished the challenge coming up against Barcelona’s midfield three – which mixes technical quality with energy and industry, starting alongside Ángel Montoro in Granada’s 4-2-3-1 formation.

While his experienced Spanish teammate relinquished possession cheaply while struggling to physically impose himself, there was no such issue for Herrera on this occasion.

He completed four tackles, four interceptions, two blocks and a clearance while winning eight of his 14 duels contested against the league’s best side. The only blemish on his performance was a booking early in the second-half for a not-so-subtle bodycheck on Messi before being replaced by a fresh Maxime Gonalons (on-loan from Roma) with seven minutes plus stoppages to play.

Unlikely to ever feature for City given their ridiculous midfield depth, it was nonetheless a refreshing display from a youngster who has settled well to Spain’s top-flight in 2019. 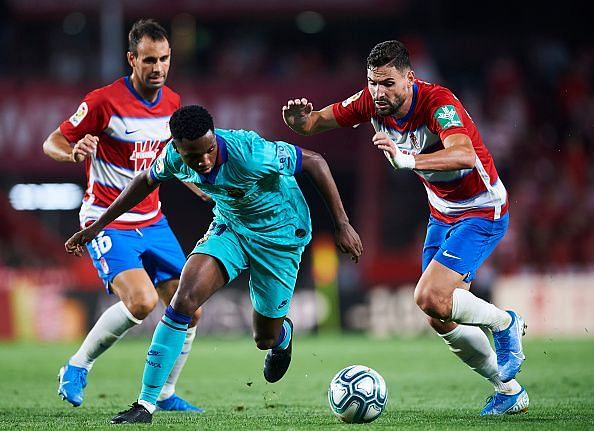 With that in mind though, there was only one player better over the 90 minutes: captain Victor Diaz. Regardless of their stuttering form, it’s difficult to keep a clean sheet against a Barcelona side stacked in attack and boasting quality across the pitch, but the 31-year-old was again integral as they kept their fourth successive clean sheet this campaign.

The fullback completed six of nine duels contested, four tackles, two interceptions, one block and successful dribble over the 90 minutes. Although his passing wasn’t particularly accurate (64%) and he lost possession twelve times, maintaining concentration was key throughout as he defended patiently while forcing mistakes from Griezmann and co down the left-hand side.

Dealing with a different challenge up against Ansu Fati after the interval, he remained disciplined with his positioning while regularly looking to force the teenager either out wide or into conservative passes infield – thus lessening his impact on a match where he would’ve hoped for more from in the second-half. Fati only completed two of his five attempted dribbles, while losing possession on seven occasions as a result. A job well done.