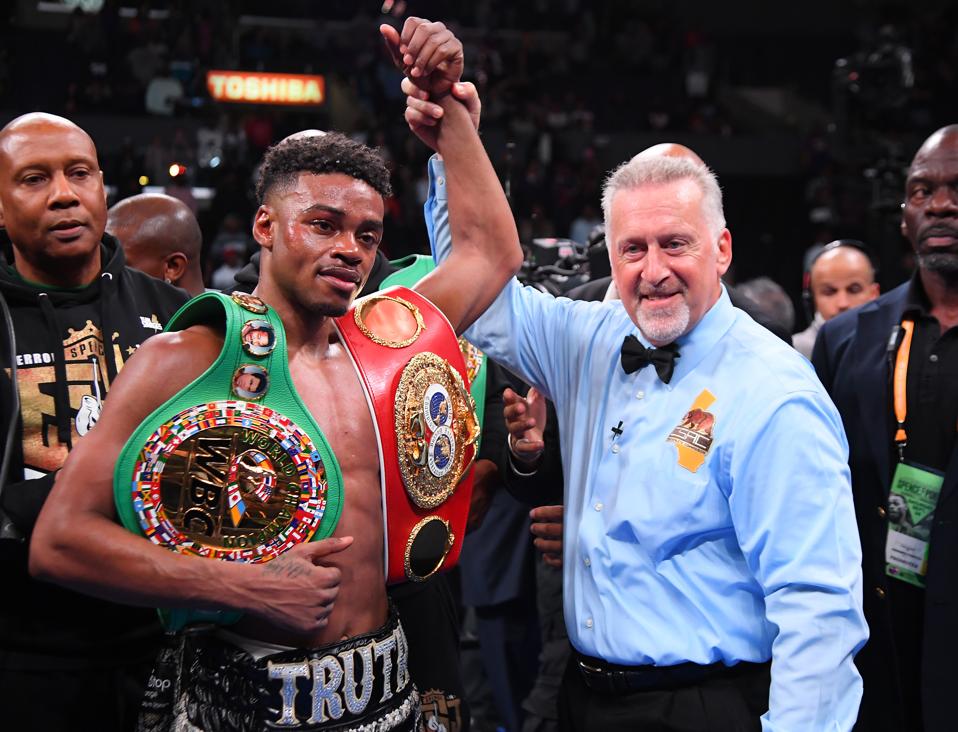 During an eagerly-awaited unification bout, Errol Spence Jr won via split decision: 116-111, 112-115, 116-111 to retain his IBF belt while claiming the WBC world welterweight title against a relentless Shawn Porter at Staples Center in an enthralling Fight of the Year candidate.

Tale of the tape

Ahead of this showdown, Porter insisted this was the best camp he’s had in his career while dismissing suggestions he’s earned a reputation as a dirty boxer. His last fight was a split decision victory over Cuban Yordenis Ugas in March where he retained gold, but the unconvincing manner of recent victories served as encouragement for Errol too.

“He has been dominant but hasn’t yet fought anybody like me.” Porter praising Spence while warning him about the quality he was about to face

Shawn described himself as an “aggressive fighter” that no-one wanted to face and being a seasoned professional, what better test for the unbeaten Errol than against a man with such world title level experience?

Porter suggested Spence has not evolved his boxing style since competing in the Olympics, questioning whether he’d enjoy the same striking success against a better opponent. The fact he had won 135 of 153 contested rounds on the judges’ scorecards in his career suggested we were about to witness an acid test of the highest regard.

“We’ll both do whatever it takes to win, I know he’s coming ready and I can’t wait… this is one for the history books.” Spence Jr previewing their clash

A memorable fight with unpredictable ebbs and flows

It was an understandably tentative first round by both men once referee Jack Reiss gave them their final instructions and the first bell sounded. Porter energetically bounced around, circling the ring and trying to nullify Spence’s three-inch reach advantage by dragging him near the corners with low flurries though neither was able to really assert themselves just yet.

Porter’s low stance begun to subtly create counter-punching opportunities for Spence, who duly took advantage and started to land clean shots. Just as he was beginning to establish his range, the determined Cleveland native fought back through his high work-rate – with varied success.

He feinted, weaved and was picking his moments to attack with energetic flurries but again Spence was able to nullify that threat in equal measure while fatigue from missed shots would soon set in. Porter’s underhand tactics weren’t working either, as he continued to drag Spence’s head down in the clinch before being admonished by the referee.

“You got hit low because you pulled his head down, don’t pull it down,” Reiss stressed. It was a necessary warning which whipped Porter into action again. Having lost that round after coming out second best in a frenzied exchange of heavy hits, his work-rate set the tone in R4. Despite missing with some wild swings, he began landing well and the importance of him closing the distance on Spence was reiterated by his success here.

At this point, you could sense a real dogfight brewing. Both embraced it, with the never-say-die attitude they pledged to exhibit in their attempts to come out on top. After such a taxing round, R5 was less intense and Porter looked to influence the judges by saving his best work until the last minute or so. Spence was unperturbed and the Texan’s shot defence just too good.

Porter was visibly frustrated as those missed punches continued to pile up, with commentators questioning how long the pair could sustain such a relentless pace. R6 was more a tussle for control than anything, with slipping and sliding a common theme as both focused on shot defence. It didn’t help Porter’s case that Spence started the round well and although stinging body shots were unleashed by the pair, Errol had more success.

Spence landed 44% of his power punches, while Porter was only able to connect with 172 of his 744 punches thrown (Picture source: Boxing News)

Subconsciously, Porter must have known. R7 prompted an aggressive, purposeful start as he began landing with increasing conviction again. The tide had turned once more.

Both landed good combinations in R8 and despite Porter’s relentless approach working in the previous round, Spence returned to those successful body shots and backed him into a corner. This was a better response and despite absorbing some good shots, he landed a clobbering right-hand reminding everyone watching this was an increasingly difficult bout to score.

Porter let fly with a bruising flurry to kickstart R9 and although Spence responded with a clean left-hand, Shawn continued to stalk his prey in the same unrelenting manner he had done previously. You could see him working hard and expending more energy as the pair traded hammer blows. 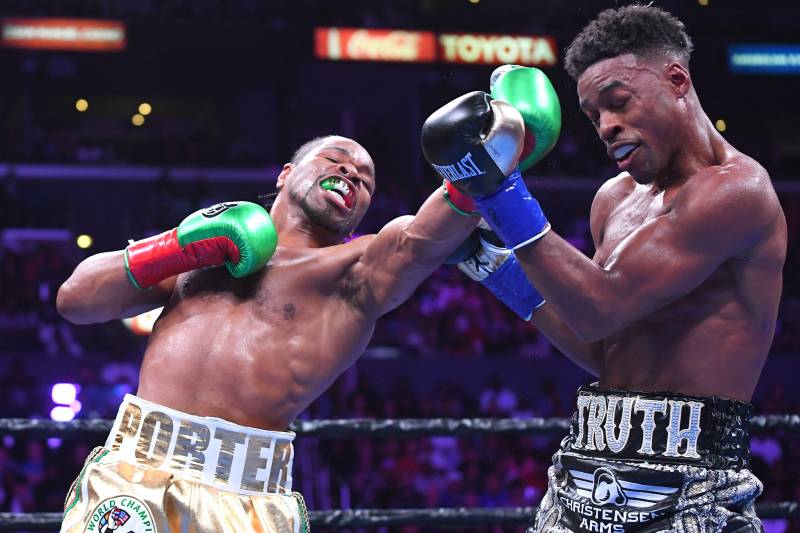 Porter landed flurries and expended plenty of energy to keep Spence on his toes throughout. (Picture source: Bleacher Report)

R10 came and went with more of the same, but better shot defence on Spence’s part: he continued to slide, weave and avoid shots aplenty despite Porter pushing the pace. Fatigue began settling in for both, though Errol was focused more defensively avoiding shots – as if he already knew he’d done enough from an attacking standpoint.

Spence looked to establish control early in R11 but Porter’s persistence saw them jostle for dominance against the ropes. Good defence by both followed, before the match shifted once more seconds later. Spence landed a blistering right-hand in the clinch, a stinging short left and watched as his shot selection dropped Porter to his knees. 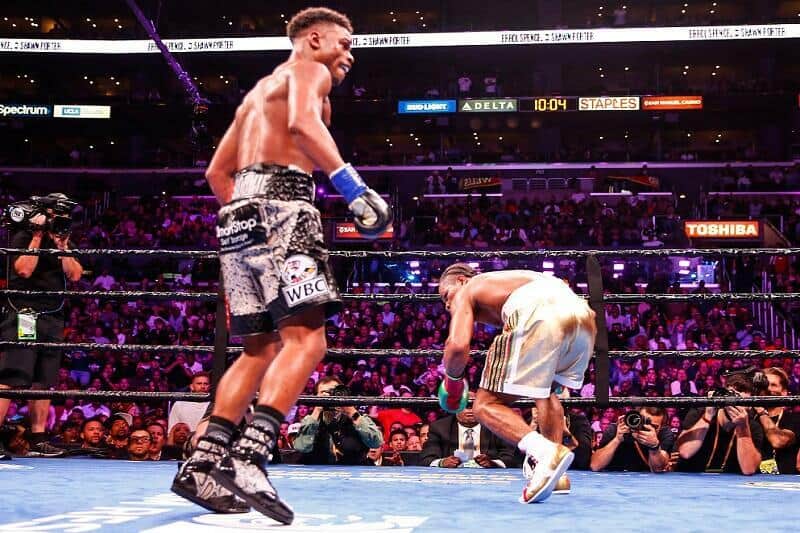 A standing eight count followed and although he couldn’t secure the knockout, this was a match-defining moment that would have immediately changed perceptions. Porter did well to recover and avoid further punishment, though the damage was already done.

R12 arrived and after the previous round, Spence went in the hunt for a definitive knockout. Porter continued to stand his ground with tenacity and defiance, recovering from another dangerous position to jostle for position near the ropes before the final bell sounded.

That was it. Both played their part in a memorable battle and although Spence might have been unhappy about not securing a KO, Porter’s durability was incredible. Leaving it to the judges’ scorecards seemed the only fair outcome after twelve fascinating rounds of boxing.

116-111, 112-115, 116-111 in Errol Spence Jr’s favour, a lot of rounds were closely-contested and could’ve gone either way but crucially, the 29-year-old backed up his words and has justified his world title pedigree once more – even as the pre-fight favourite.

Errol Spence Jr made history to become the 11th unified world champion across all weight classes in history and was honest when reflecting post-fight:

“This is a lifelong dream of mine. Thanks to Al Haymon, Fox, all the people from Texas for coming out… Shawn Porter is a rough, awkward fighter. He was strong, has tremendous heart and all credit to him.

I looked kinda sloppy out there and it wasn’t how I wanted it [to be] but that’s more a credit to him, all my punches have bad intentions but I proved I can sit there with one of the roughest, toughest in the division and went to battle with him.”

Midway through the post-fight interviews, Danny Garcia emerged from his seat in the stands before the interviewer confirmed he’d be next inline for a title shot at some stage in 2020.

“I told Al, you line them up and I’ll knock them down.” – Spence Jr’s immediate reaction when confronted with his next opponent

When Garcia was asked for his thoughts on the fight, he said: “It was a tough, rugged fight but he’s the top dog and I’m in top spot [inline for the belts]. Porter is a hard fighter, he [Spence] got the job done but I want next. Let’s get it on.”

Porter had no regrets and instead held his head high after the split decision defeat.

“He’s a strong kid, we both came here to do the job. I hope I don’t take anything [away] from him but he got a little more than what he expected… Congratulations to him and his whole team. I think the knockdown was the difference, I couldn’t come back [to the corner] with my head down low after the heart I showed, so yeah.”

On what awaits him next: “We [him and his team] are all proud of the job we did tonight, we’ll see what the future holds. Me and my father will watch it back and talk about it.”

Champion-vs-champion, this bout certainly lived up to the billing and then some. Precisely the breathless, frantic, unpredictable battle justifying months of waiting in the build-up, it’s special matches like these which boxing fans worldwide long for on a more regular basis.

As far as 2019 is concerned, this was comfortably one of the best matches we’ve witnessed and with 10-odd weeks left of the decade, calling it a Fight of the Year candidate title doesn’t do this justice.

It’s the perfect advert for a sport that has its critics and various politics involved between TV broadcasters, governing bodies and the fighters themselves. When the end result resembles a memorable spectacle like this though, it’s ultimately worth the wait.

Despite closely-contested rounds and a truly unpredictable 36 minutes, Errol Spence Jr was the deserving winner. I scored it 115-111 in his favour and although you could argue about a few rounds here-and-there, he clearly won rounds after surviving a spirited onslaught once Porter got settled.

He silenced those same critics who questioned the quality of opponents he’s faced thus far as a seven-year professional, though his split decision victory was quickly put into perspective once number one contender Danny Garcia (35-2, 21 KOs) ambled towards the ring.

It’ll be interesting to see where Porter goes from here, having toppled Garcia himself for the WBC title last September. Showtime turns 32 next month and should be encouraged by his display here, despite suffering a third career-defeat – especially having coming in as a heavy underdog.