Manchester United have been confined to their worst start to a Premier League season in club history, after being held to a frustrating 1-1 draw against Arsenal in Monday’s featured evening fixture.

Goals from Scott McTominay and Pierre-Emerick Aubameyang meant the two sides shared the spoils on a wet evening at Old Trafford, one where the gulf in quality between themselves and England’s best – Manchester City and Liverpool – was evident for all to see.

The result means United remain three points behind Unai Emery’s men, who occupy the final Champions League place with 12 points after seven matchdays in 19/20. In addition, the Gunners themselves are winless in their last 24 league away games against top-six opposition.

McTominay netted his third United goal with an emphatic finish just outside the box on the stroke of half-time, with Arsenal left exposed on the counter-attack from their own corner-kick. It took a deflection off Sokratis before arrowing beyond Bernd Leno into the far corner.

Aubameyang’s equaliser just before the hour mark was initially ruled out by the linesman on the far side, but after VAR review it was correctly overturned after Bukayo Saka’s pass caught Harry Maguire lagging behind his defensive teammates. In doing so, Aubameyang becomes the first Arsenal player to score seven goals in seven games to start the league season since Dennis Bergkamp in the 1997/98 campaign. 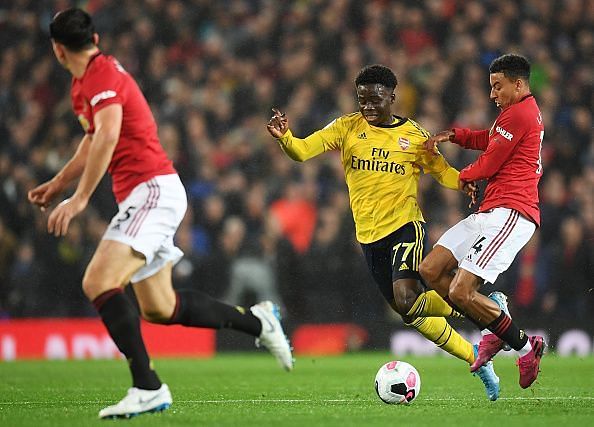 Lingard was fortunate not to have been sent off for two poorly-timed sliding challenges, one went unpunished after a cynical tug on Saka in transition before finally being booked for sliding in late on Guendouzi, despite his protests.

His passing was tidy but equally conservative, which is typical from a player who has been heavily criticised of late and is clearly mindful of making too many mistakes. With 95% pass success and one key pass, you might assume this was a decent showing for the England international.

Instead though, he was too safe and largely on the periphery – while clumsy in the tackle (three fouls committed) and spent more time complaining than he did actually affecting the game.

Winning none of five duels contested, this individual display didn’t make for good viewing from a player yet to convince many that he belongs at United long-term. It seems increasingly apparent that he’s more a beneficiary of circumstance and injuries to other creative teammates than anything else, which doesn’t bode well for the future unless his performance levels increase. 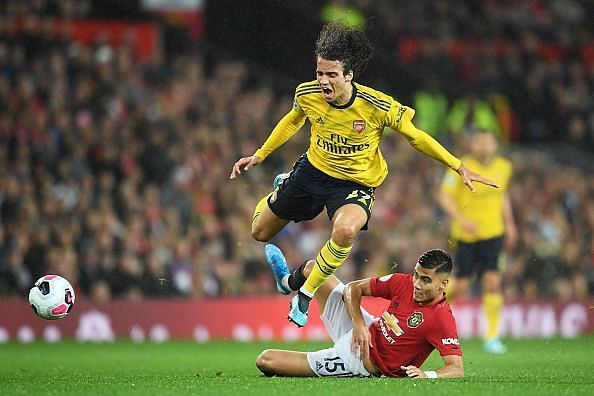 Guendouzi worked hard defensively and needed to, against a United side who could have scored more

This was a typical, defiant Matteo Guendouzi display: he worked relentlessly, made a crucial defensive recovery to thwart a United counter-attack in its tracks early in the second-half and had an exasperated look on his face, gesturing to retreating teammates to do more.

That moment rather typified Arsenal’s defensive woes, where players are often out of position, caught too high up the pitch or seemingly lose all positional awareness and left exposed by alert attackers who can sense danger seconds before a lethargic Gunners backline does.

Guendouzi was, as usual, the best of Arsenal’s midfield trio – partnered by Lucas Torreira and captain Granit Xhaka on this occasion. Winning twelve of his 19 duels, he was fouled on six separate occasions, completed four tackles, three clearances and enjoyed 89.7% pass accuracy too.

Although he’s sure to be a nuisance for opposition players (and their fans!) to deal with during tight matches like these, it was refreshing to see him embrace the role and responsibility he does so often, by keeping United midfielders at an arm’s length. Purposeful and energetic as usual, that infectious attitude was on display again. It was just a shame the large portion of his teammates couldn’t follow suit often enough. 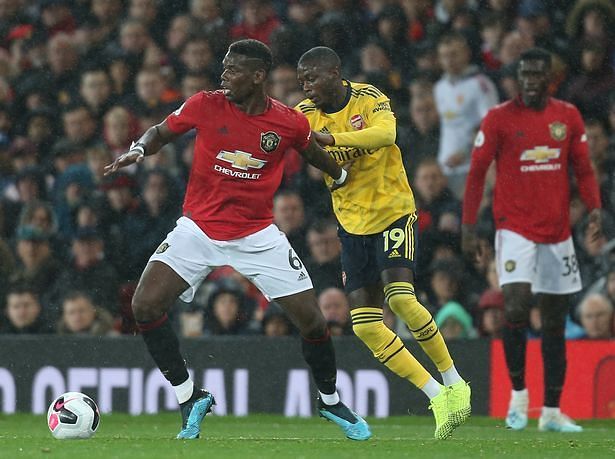 Well, where to start? Nicolas Pepe’s best moment during this one came via an Andreas Pereira slip, which says more about just how ineffective Arsenal’s £72m signing was against a United backline who have kept just three clean sheets in 2019.

His attempted through ball for Saka in transition should have been cut out by Pereira, who slipped and watched the pass slide through his legs into the teenager’s path. David de Gea’s double save moments later kept the scores goalless.

A minute later, United took the lead and it was that type of game in truth. Another frustrating display where Pepe fleeted in-and-out of the game, his end product and decision-making left a lot to be desired. Ballooning a well-worked opportunity over the crossbar and losing possession a whopping 17 times before being replaced for Reiss Nelson with 15 minutes left, he was wasteful and more importantly, seldom dangerous.

That club-record fee continues to haunt him and displays like this prove he’s trying too hard and expectations should be tempered. They won’t be. Instead, they continue rising for a player who has shown brief signs of his potential but not enough to justify a bonafide starting berth right now. 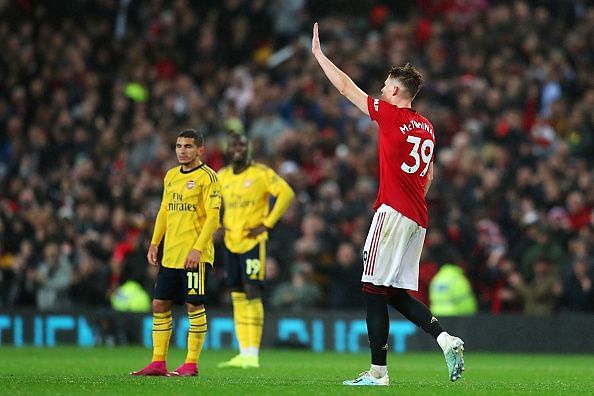 McTominay reserved one of his best performances against Arsenal, on an evening where his pedigree shone

Regardless of the deflection and Xhaka’s ducking, Scott McTominay took his goal well and broke the deadlock at a time where Arsenal’s backline were left exposed from their own set-piece and insufficient game-management – on the stroke of half-time no less.

Ever-present in midfield, the 22-year-old was a more imposing and ever-present figure than Paul Pogba, Andreas Pereira and Jesse Lingard combined. Writing that sentence should be a typo somewhere, but it really was the case. Unlucky not to score another, he headed over the crossbar when left free by a wandering David Luiz from a promising second-half corner.

With four tackles, two interceptions, one clearance and key pass to accompany his well-taken strike from range, it was a workmanlike display from a midfielder who continues justifying his place over the likes of Nemanja Matic in a United side who hasn’t really found its strongest that hasn’t really found its strongest eleven. He won 12 of 18 duels contested and netted a sweetly-struck effort, what more can you ask for? Dependable again. 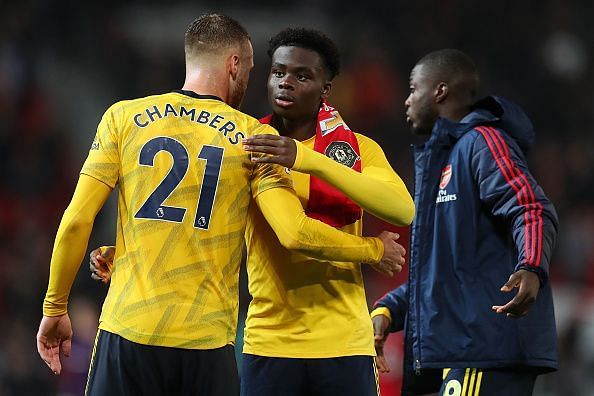 Eyebrows would have been raised, seeing Bukayo Saka make history to become the youngest player to start an Arsenal-Manchester United fixture here: he passed this test with flying colours.

Initially this was an encouraging showing, which eventually turned into an excellent display from a fearless youngster who continues to grow in confidence. Assured in possession and one of few Arsenal players capable of unlocking United’s vulnerable backline, the 18-year-old relished his battle against an experienced Ashley Young, regularly coming out on top.

In hindsight, he will have wanted to do better with his second-half effort inside the box but saw his strike deflected over the bar. With two successful dribbles, 10 of 19 duels won and fouled on three separate occasions, he was a persistent nuisance for United to deal with, but equally embraced his defensive responsibilities and completed a game-high five tackles too.

Teeing up Aubameyang to equalise just before the hour mark, he earned a first Premier League assist after quick-thinking caught Harry Maguire lagging behind his defensive teammates. He made the pass look easy, but releasing it early and accurately was crucial in the build-up to Auba’s finish.

With more favourable fixtures between now and Christmas, he’ll hope for more of the same confident, effective displays in the weeks and months to come – having starred during their Europa League win over Eintracht Frankfurt in mid-September. With himself, Joe Willock, Reiss Nelson and Gabriel Martinelli all among the youngsters breaking through right now, it proves that while their current crop isn’t good enough, the future is certainly bright.