Having endured a frustrating hour at the Nou Camp, Luis Suarez netted two brilliant strikes to complete a second-half comeback, sinking a valiant Inter effort while presenting Barcelona with their first Champions League win of the 2019-20 campaign.

The Uruguayan’s venomous volley flew into the bottom corner just before the hour mark, having been set up by substitute Arturo Vidal’s inviting cross just outside the box. Samir Handanovic had no chance and despite a despairing dive, watched his clean sheet evaporate with aplomb.

Having flickered in-and-out of the game with limited success to this point, Suarez then provided the killer blow with six minutes to play after a deft flick left Diego Godin in his wake before prodding past Handanovic into the far corner.

It was a complete turnaround from a worrying first-half, where Lautaro Martinez broke the deadlock after just three minutes. He unleashed a clever sliding finish under pressure in the box, having outmanoeuvred Clement Lenglet before firing beyond a wrongfooted Marc-Andre ter Stegen. The 22-year-old could’ve doubled his tally after powering a header goalwards, but was denied by ter Stegen, determined not to be beaten a second time.

Antonio Conte’s men were impressive, particularly in a breathless first-half where they split the Barca backline effortlessly at times. They created ample chances to score more and probably should have netted more than their solitary opener on a frustrating evening which leaves them with a point from their opening two group F fixtures. No wonder Conte and Alexis Sanchez were booked on the sidelines for dissent in a testing second-half.

Without further ado, here’s a look at five hits and flops from Barca’s third successive wins in all competitions:

Barella was ultimately not good enough against a Barca midfield who started sluggishly, though improved after the break

Barella was booked for a needless foul early on and despite his futile protests, could have no complaints after committing to a poorly-timed tackle. In fairness, he did his bit over the 90 minutes but moments were largely infrequent against a vulnerable Barca midfield trio, especially after their sluggish start to proceedings trying to deal with Inter’s passing and relentless energy.

This all shifted drastically after Ernesto Valverde’s timely substitution early in the second-half, where Sergio Busquets – also booked – was replaced by the all-action Arturo Vidal.

As a result of Vidal’s influence, the Italian international found himself increasingly isolated and as time wore on essentially outshone by his two midfield partners Stefano Sensi and Marcelo Brozovic, who either contributed heavy defensive work or created opportunities in the final third. He should have done more to support the pair, who didn’t deserve to be on the losing side here.

Despite completing four of five attempted dribbles, winning 10 of 20 duels alongside 81.5% pass accuracy, he relinquished possession 13 times, committed three fouls and was dribbled past on three separate occasions too. 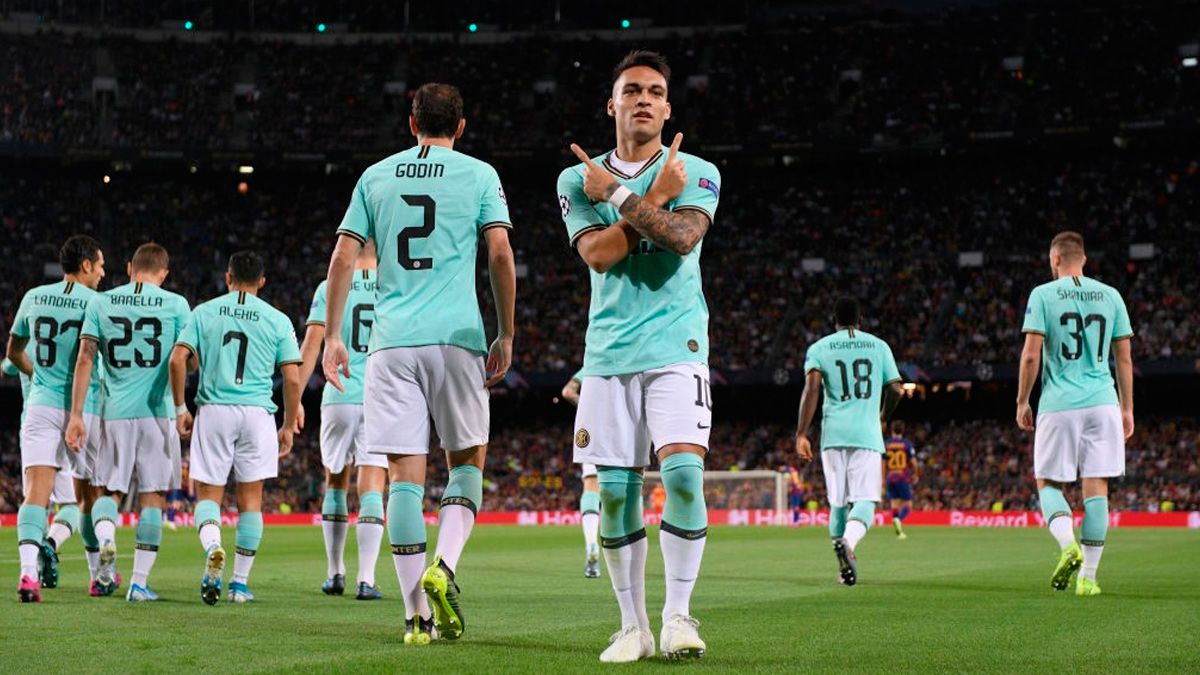 Martinez showed great composure and timing to break the deadlock, while leading the line well despite Inter’s defeat

Martinez broke the deadlock with a clever, pinpoint finish sliding across the turf wrongfooting ter Stegen at his far post, having impressively held off Clement Lenglet’s best defensive efforts to devastating effect so early on.

This set the tone during an impressive first-half showing by the visitors, who took the game to Barca and made them uncomfortable out of possession – while equally hesitant with it, given their deep block, three experienced centre-backs and the rigidity Conte instils among them.

If not for an excellent point-blank save by ter Stegen, the Argentina international would have doubled Inter’s lead before half-time. Leading the line confidently, with refreshing exuberance and Alexis Sanchez buzzing about to his right, he’s certainly showing he is capable of succeeding Mauro Icardi as their lone centre-forward, which is remarkable considering how things have changed so much in 2019 for the club’s attacking options.

Barca themselves have been linked with an approach for the 22-year-old, as a long-term centre-forward successor to the declining Suarez. Performances like these certainly don’t hurt his stock, even though he’ll gladly tell you of his commitment to the cause under Conte. 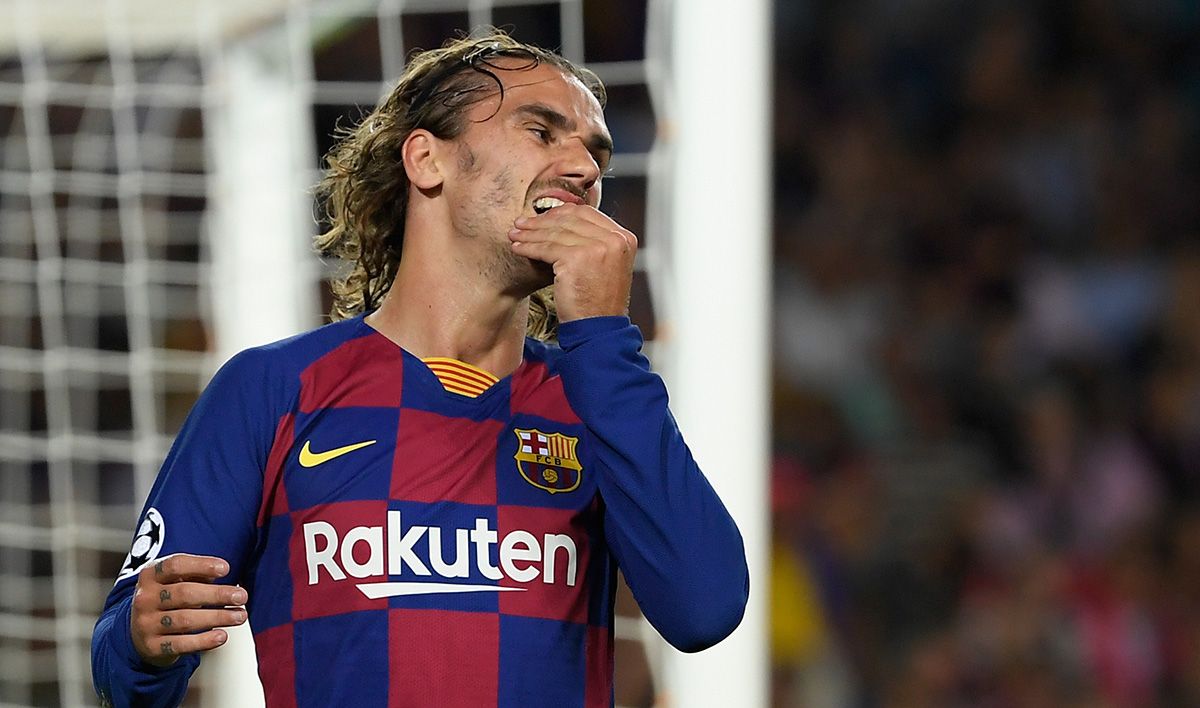 Another important night, another disappointing showing from Griezmann – many suggest he’s just not suitable in this Barca side

There seems to be a sense of deja vu when it comes to covering Antoine Griezmann’s performances of late. As I’ve said a handful of occasions already this term, the World Cup winner has either been brilliant or frustratingly poor – no in-between.

Again here on the big stage, the latter was increasingly apparent and he ultimately disappeared when his teammates needed him most. It was annoying to watch and receiving an early needless booking didn’t help the 28-year-old’s mood, again being deployed on the right-hand side of Barca’s attacking trident.

Regularly isolated, he squandered a promising chance and despite being correctly ruled offside after the miss, something was clearly wrong with him playing that position. Griezmann’s 47 touches isn’t an alarming statistic, yet he should have been more involved.

There were positives but they came infrequently as a direct result of Inter’s lax defending rather than moments of invention. Teeing up both Sergio Busquets and Arturo Vidal either side of half-time with promising passes in the final third, neither rewarded him with assists.

The fact he was replaced after 65 minutes for compatriot Ousmane Dembele, who did more in less time and actually looked comfortable alongside the Messi-Suarez pairing was worrying. It’s still early days in his Barca career so any overreactions to displays like these are premature, but given their lofty expectations and heartbreaking failures in recent seasons, Barcelona are not the team with ample time to be patient. 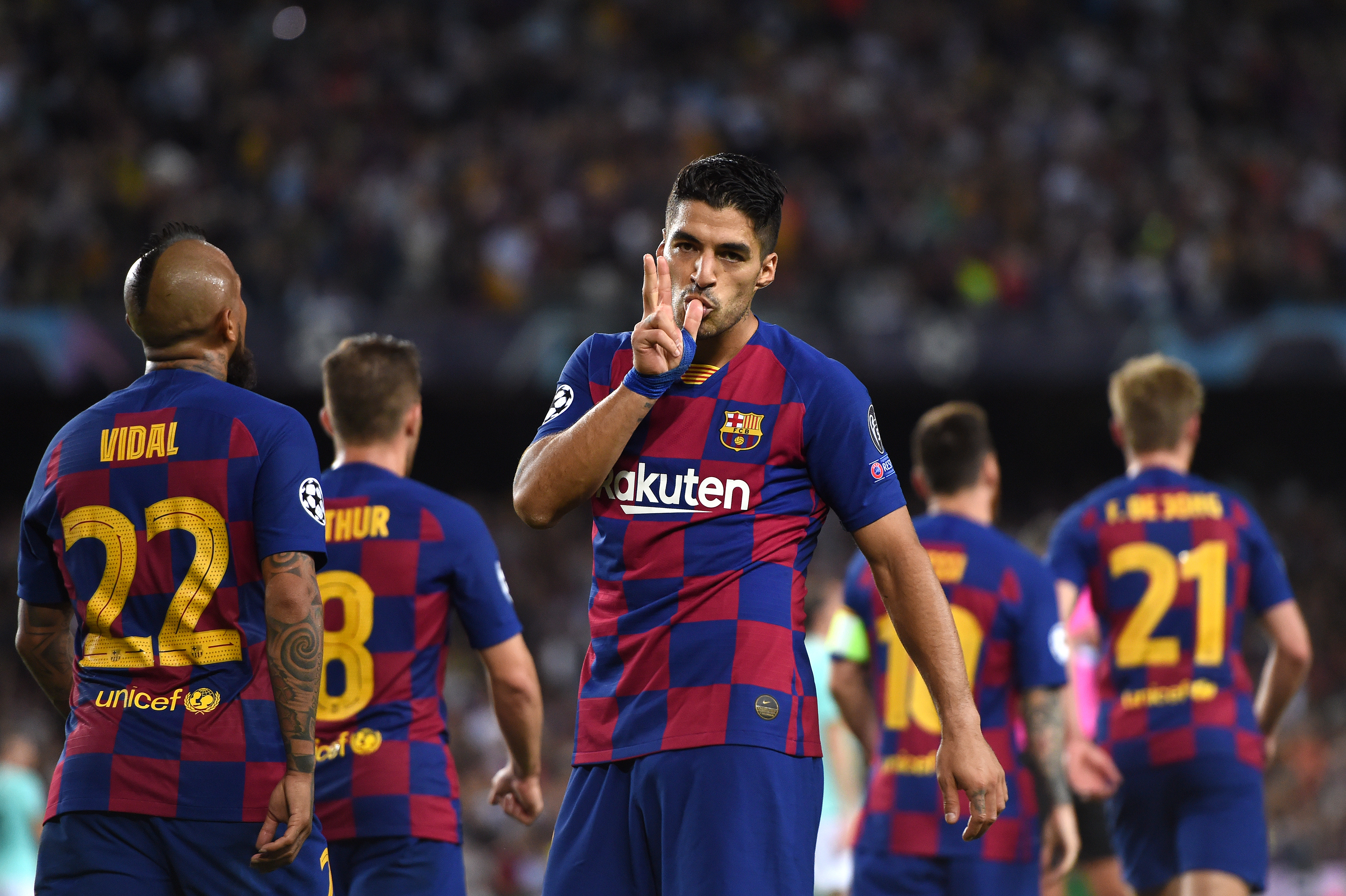 Despite a largely frustrating outing, Suarez sprinkled his world-class dust and left a lasting impact with two second-half strikes

So remember I said Griezmann had 47 touches in 65-odd minutes here, right? Suarez had 45 across the full 90 minutes and netted a matchwinning brace. Sure, they were playing in different positions and had differing responsibilities, but you get the point.

Luis’ faltering form in recent seasons has been punctuated by his skewed decision-making at times, while his physical attributes are gradually declining too. But although he does pick his moments to conjure up world-class magic, none were more timely than this fixture here against an Inter side who worked tirelessly but were made to rue missing their earlier opportunities.

Suarez was struggling to find his rhythm and when he’s in a mood, opposition players can sense the same. Regularly stifled with cynical fouls (three recorded, many more attempted) or forceful challenges, he spent large periods here sprawled across the turf remonstrating with match officials in frustration. Hard done by, he crucially didn’t let the visitors’ overtly physical approach disrupt him too much – bursting into life at a similar time to Messi.

His equaliser was a thing of beauty, shuffling across and timing his movement perfectly to latch onto Vidal’s lofted pass and strike goalwards with a first-touch finish. It’s something that he has almost made his trademark over the years, but the degree of difficulty was ridiculous and the Uruguayan made it seem simplistic as it flew into the bottom corner.

If that goal was special, the second showcased why despite his inevitable decline, Suarez can still decimate the world’s best with subtle brilliance. Messi’s marauding run and pass set him up, but with work still to do, he took a brilliant touch to flick it past Diego Godin – leaving the experienced defender in his wake – before showing composure to slam home from close-range.

He’s back! Lionel Messi again displayed precisely why he’s such a decisive figure in tricky matches for Barcelona, who constantly played their attacks through their talisman on this occasion.

Still not 100% fit after a pre-season of recuperation following a recurring calf problem, he hobbled off at half-time during their 2-1 win over Villarreal nine days ago but upon returning here, did his utmost to inspire Barca players forward.

Sometimes he was guilty of doing too much, understandable given his enthusiasm to orchestrate attacks from deep and dribble beyond a cluster of Inter players whenever possible. The visitors defended patiently and were methodical about their approach to shutting him out – like Borussia Dortmund on MD1 – but were up against an inspired Messi display that refused to be perturbed by their underhand tactics to disrupt his flow.

Having forced Handanovic into a number of comfortable saves across the 90 minutes, Lionel turned creator to devastating effect. With a game-high ten successful dribbles, six key passes (85.9% pass success) and 13 of 17 duels won, the 32-year-old was an nuisance that just wouldn’t relent.

The pressure finally told in the latter stages, with Messi heavily involved in both Suarez strikes. For his first, Lionel effortlessly jinked his way into the box and under pressure from Kwadwo Asamoah, released a reverse pass into Arturo Vidal. Moments later, they were celebrating a brilliant equaliser and Barca had forward momentum to capitalise upon.

To set him up for the winner though, that was even better. He received a Vidal pass down the right, danced his way beyond four Inter challenges before releasing an unmarked Suarez to his left. Although the Uruguayan’s touch was immaculate and helped along the way, this was another moment of individual genius by the world’s best.

Despite not featuring much this term, his influence on this Barca side was emphasised in this showing, one you’d have to appreciate with your eyes more than words can truly describe. It’s a pleasure to watch Messi-Suarez combining against opponents and although Inter are right to be frustrated by this result, it felt inevitable having squandered earlier chances to put the game beyond reach.