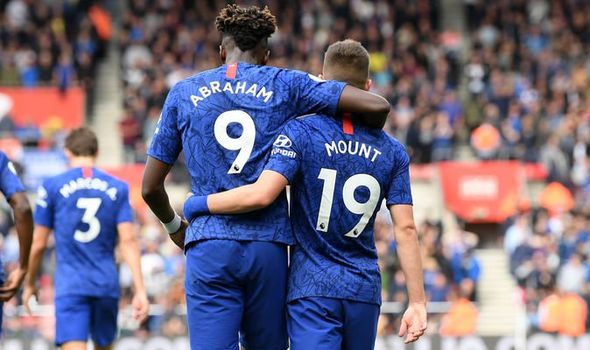 Tammy Abraham and Mason Mount were again on the scoresheet for a potent Chelsea, who prevailed with a comfortable 4-1 away win against Ralph Hasenuttl’s disappointing Southampton side in their final Premier League fixture before the international break.

Abraham broke the deadlock after 17 minutes, latching onto Callum Hudson-Odoi’s lofted pass before flicking it high above an onrushing Angus Gunn. Despite Maya Yoshida’s last-ditch clearance attempt, goalline technology showed the ball had fully crossed the line before being punted to safety.

Mount displayed both industry and spatial awareness just seven minutes later, winning possession in Southampton’s half before Willian spotted his marauding run through into the box where he slammed home at Gunn’s near post.

The hosts were handed a lifeline on the half-hour mark when Danny Ings netted his fourth goal in three games, poking beyond Kurt Zouma at Kepa Arrizabalaga’s near post after Yan Valery’s adventurous run-and-cross were not intercepted in time. But ten minutes later, Chelsea restored their two-goal cushion as N’Golo Kante saw his strike from distance take a wicked deflection off Emile-Pierre Hojberg, flying into the opposite corner.

Ings would’ve doubled his tally in first-half stoppage-time but for Jorginho’s excellent recovery, moments after Fikayo Tomori’s mistake in possession gifted a chance with the goal gaping. Ultimately the game was put beyond any doubt late on, as two second-half substitutes combined to apply gloss on a well-deserved away win – £60m signing Christian Pulisic teeing up striker Michy Batshuayi, with his first Chelsea league goal since October 2017.

Without further ado, here’s a look at three reasons for the Blues’ fourth successive win in all competitions:

#3 Jorginho and Willian the unsung heroes

Jorginho (far right) and Willian (left) come in for criticism aplenty after underwhelming displays, so it’s only right they are highlighted here

Jorginho and Willian have been two of Chelsea’s chief scapegoats whenever they underperform or find themselves on the receiving end of a frustrating defeat – it’s been like this since last season began, for different reasons.

Willian has never managed to recapture his best goalscoring form – the 2015/16 campaign – while Jorginho was immediately a victim of his £60m pricetag from Napoli. Earmarked as their midfield saviour, he hasn’t always looked that as part of a Chelsea side struggling to find the right balance between technical quality and defensive nous.

After a slow start to the campaign, Willian is producing steady displays. His assist for Mount was both clever and subtle, as he weighted the pass perfectly for the 20-year-old to control and shoot goalwards, having already breached their way into Southampton’s box with seeming ease. He now has a goal or assist in his last three appearances (all competitions), at a crucial juncture in his Chelsea career with less than twelve months to run on his existing deal.

As for Jorginho, he picked up an early booking after sliding in late on Shane Long – despite suggestions he’d also won the ball in the process. Having to walk the proverbial tightrope for the remaining 78 minutes meant he needed discipline and concentration, against a Southampton midfield capable of troubling anyone league-wide when they’re on-song.

They were okay in patches but with the Italian’s presence alongside the dependable Kante, the hosts found themselves effectively stifled. Their best chances came either from slaloming runs or individual mistakes, like Tomori did on the stroke of half-time. Besides his goal-saving clearance, the 27-year-old worked smartly with three interceptions and two tackles: enjoying an encouraging start to his second campaign in England.

Yoshida and co were forced to endure a tough afternoon against a patient, potent Chelsea side

This defeat is Southampton’s fifth already this term and after eight games, they find themselves level on goal difference (-7) with Marco Silva’s Everton hovering in the relegation zone.

All things considered, that’s a worrying sign for Hasenhuttl and this international break comes at a welcome time after losing three successive league games. The problem which will concern the Austrian most is the manner in which they concede goals, as they’ve now shipped 15 and October has just begun.

Norwich (21) and Watford (20) are the only two sides who have conceded more. If you look at how they conceded four here, it speaks volumes for their struggles.

Abraham’s opener was an unorthodox but deft finish by a striker playing full of confidence, despite Yoshida’s best efforts. Callum Hudson-Odoi has far too much time to pick out a pass for Tammy though and should have been closed down. Angus Gunn’s starting position is far too high and the goalkeeper essentially dares his compatriot to chip him, which he does.

Mount’s goal stemmed from a poorly-executed attempt at passing out from the back in the So’ton half and having been given another chance to atone for their error, a weak Jan Bednarek header forward sees an alert Willian retrieve possession before teeing up Mount seconds later.

Again, space was a recurring theme for Chelsea’s third goal – this time Kante striking from distance. Although it took a deflection and wrongfooted Gunn, there were four Southampton players within blocking range of the Frenchman as he shaped to shoot. Why did none of them close him down quickly enough or better yet, shut off the passing lane altogether?

The fourth and final goal was brilliantly-worked from the visitors but Southampton defenders were caught ball-watching. Batshuayi dropped deep to receive Jorginho’s pass, played a slick one-two with Pulisic whose defence-splitting return ball left their backline in tatters before the Belgium international slotted his first-time finish through Gunn’s legs at his near post. Too easy.

Mount celebrates his composed finish, having worked tirelessly as usual to retrieve possession in the So’ton half

Abraham has silenced critics to prove his worth as Chelsea’s first-choice forward option in recent months, but Mason Mount’s adaptability, invention and persistence means the pair have combined to develop into one of the league’s most feared duos this term.

Sure, it’s still early days but all the signs are promising from two players with plenty of potential to fufill and a manager in Frank Lampard that will provide them ample opportunity to blossom.

It was far from a vintage display by either but crucially, they did what they could to get Chelsea going early on. From there, they found themselves in cruise control courtesy of the Saints’ lax defending and a comfortable away cushion to protect.

Mount’s passing was risky and the stats show that (28 accurate passes, 68.3% completion), though the 20-year-old playmaker created two key passes and displayed composure to double the lead with Southampton still stewing from the frustrating way they conceded their first. He could’ve completed his brace three minutes later, but fired an effort over the bar after good work from Hudson-Odoi.

Abraham meanwhile, was an ever-present thorn in the hosts’ backline and despite registering just 23 touches in 84 minutes, showcased precisely why he scored goals for fun on-loan in previous seasons elsewhere.

Attacking intelligence, awareness and precise movement were key as he broke the deadlock and continued to pull So’ton defenders left-and-right trying to track him later on. Both were replaced late on for Kovacic and Batshuayi respectively, presumably with their latest England call-ups in Lampard’s mind after the pair delivered another memorable shift.