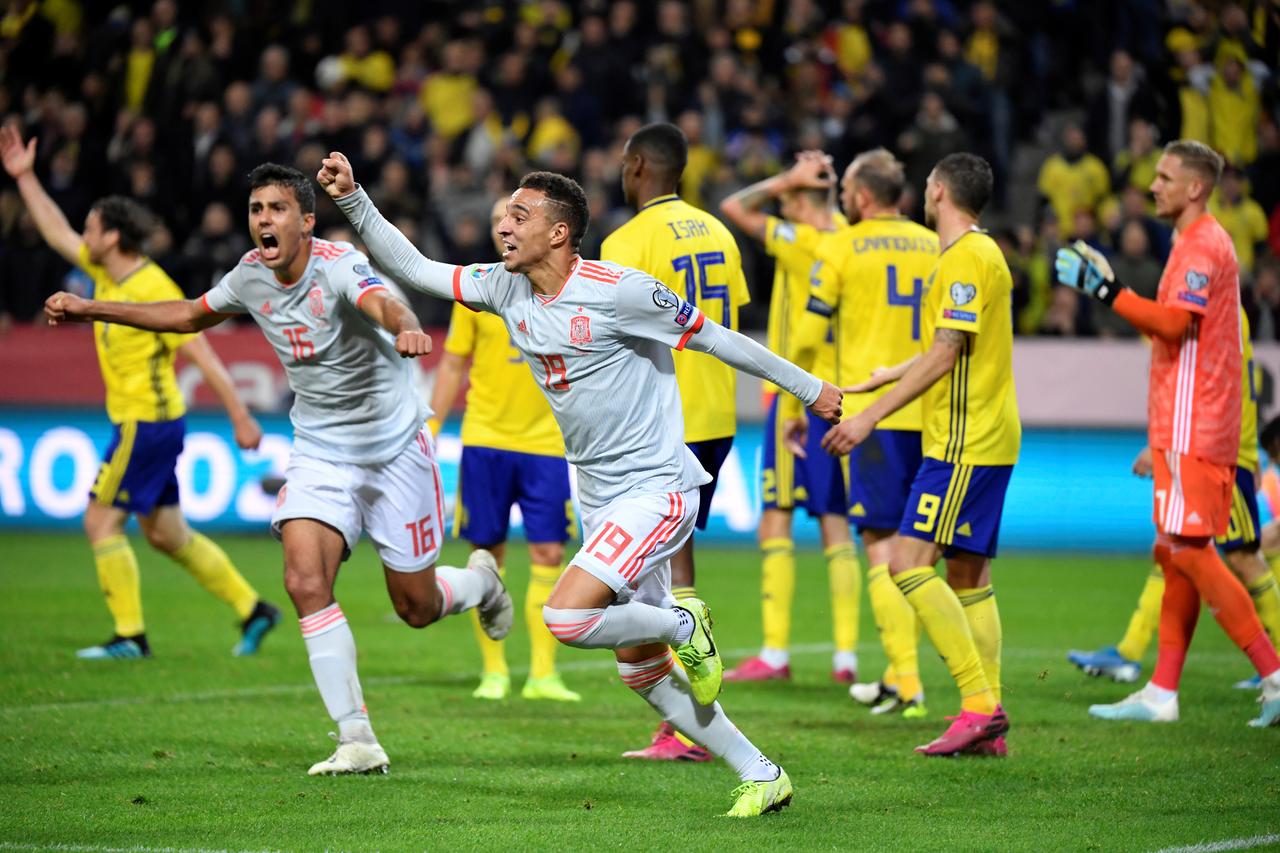 A stoppage-time equaliser courtesy of substitute Rodrigo broke Swedish hearts to secure Spain’s place at Euro 2020 next summer, while maintaining their unbeaten record with two qualifying fixtures still to play.

Robert Moreno made six changes to the team who drew 1-1 against Norway on Friday, but you could excuse their confidence after a dominant 20-minute spell saw them create chances galore: forcing goalkeeper Robin Olsen into a string of excellent saves to keep the scores goalless.

Fabian Ruiz and Thiago Alcantara came close to breaking the deadlock in the first ten minutes, the latter being thwarted after attempting to round Olsen with the goal gaping. Rodri too was denied, this time from point-blank range at a poorly-defended corner before debutant Gerard Moreno saw his headed effort tipped past the far post minutes later.

25 minutes in, the tide drastically turned and for all their dominance, Spain were suddenly on the ropes. Gent fullback Mikael Lustig stung David de Gea’s gloves with a sweetly-struck effort from distance before Mainz midfielder Robin Quaison had his header acrobatically tipped over the crossbar by the Manchester United number one.

Emil Forsberg came close after a mazy individual run before half-time, though the warning signs were there. Within five minutes of the restart, Sweden were deservedly ahead.

de Gea’s double save was ultimately in vain as Marcus Berg reacted quickest to flick home a rebound in the six-yard box. Ten minutes later, their issues were compounded as de Gea – hampered by an earlier hamstring complaint – couldn’t continue any longer. He limped off and was replaced by Kepa Arrizabalaga, with Spain aiming to recover from a precarious situation.

After waves of increased pressure, La Roja‘s persistence finally paid off in cruel fashion against a resolute Sweden side with their backs against the wall.

Alexander Isak’s header inadvertently teed up an unmarked Ruiz near the far post and the playmaker drilled the ball back across goal with a cluster of players ballwatching. Rodrigo reacted quickly to pounce on the chance, slotting it home to equalise and prompt wild celebrations on the touchline – Spain knew they were fortunate to come away with a point.

Their second successive draw, coupled with Alexander Sorloth’s stoppage-time equaliser against Romania, means Spain have secured their Euro 2020 status as leaders in Group F while Sweden remain second, but only just. They play third-placed Romania, who are just one point behind, next month. Without further ado, here are three talking points from this fixture: 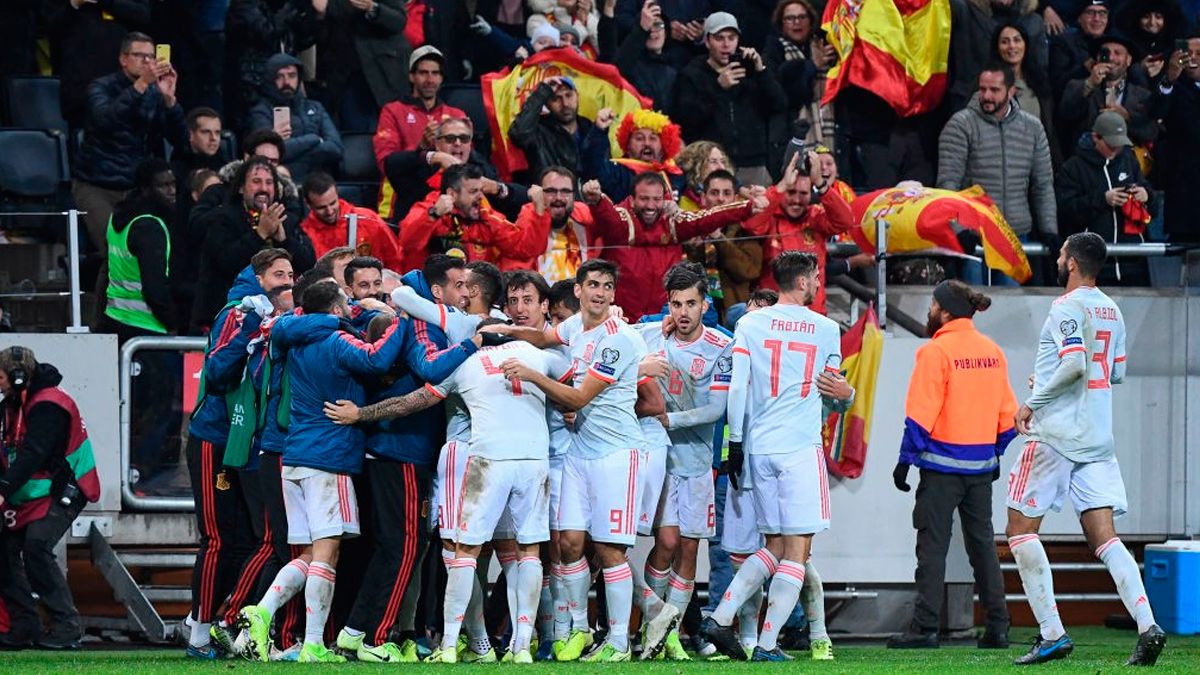 Spain survived by the skin of their teeth despite a fast start, though changes will need to be made in future

Spain made headlines last week after Robert Moreno fielded eleven different players from eleven different clubs during their 1-1 draw with Norway, which was both refreshing and worrying. Refreshing in the sense that his presence grants more opportunities for lesser-fancied players, who all have something to prove if they want to remain in the international setup going forward.

Worrying though, because the Barcelona-Real Madrid duopoly that often dominated these squads also formed a significant portion of their world-class players. If you scan the 23-man squad, player-for-player, how many are truly left? Sergio Ramos and Sergio Busquets – both declining, David de Gea plagued by inconsistency, maybe Carvajal/Thiago? Who else?

This is where picking the right players to suit your playing style is key: Moreno trialled different formations and personnel over this international break and you can sense he’s starting to establish his strongest eleven.

However, the problem remains in midfield and attack. Fabian Ruiz and Thiago Alcantara are Spain’s best two current creators but cannot fit into a 4-3-3, while the Busquets/Rodri debate will continue to intensify as time and the proverbial torch passes from one to his natural successor.

Santi Cazorla is 34 but remains a useful creative option, like Dani Ceballos. He flatters to deceive and is rather ineffective when not playing in his preferred role. But where truly is that? Rodrigo netted his eighth Spain goal on this occasion, but he’ll be jostling with Gerard Moreno and Paco Alcacer once the latter returns to full fitness. Which formation is best? 4-3-3? 4-3-1-2? 4-2-3-1? 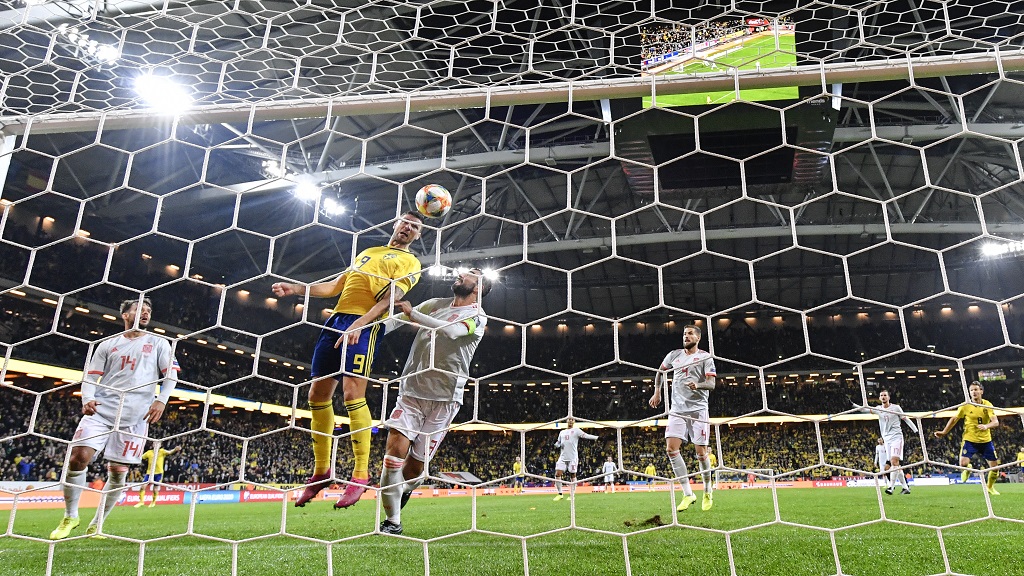 If you only watched the first twenty minutes here and had to go out, you’d be justified in assuming Spain eventually ran away with the game. Instead, Sweden held firm and responded well to ongoing pressure on their goal – having Robin Olsen to thank for keeping the scores level – before exacting a plan of their own which almost worked to perfection.

Suckering the Spaniards into a false sense of security worked, because they were able to counter-attack with numbers and force their opponents into mistakes in possession. Rodri, Thiago and Ceballos all relinquished possession cheaply at times, while their fullbacks in Bernat and Carvajal lost it more than most. 32 times combined between the pair over the 90.

Despite firing narrowly wide before half-time, Forsberg was fairly quiet but Quaison certainly wasn’t: it was his brilliant cross in the build-up which created Berg’s opener, while the Swedes were economical with timing and nature of their tactical fouls (18), stifling Spain after scoring.

It exposed Spain’s tiki-taka weakness, one regularly questioned when they fall short at major tournaments or struggle to breakdown sides they should be comfortably beating. A prime example was World Cup hosts Russia last summer and despite being a drastically different team 14 months on, the same issues are bubbling to the surface again. 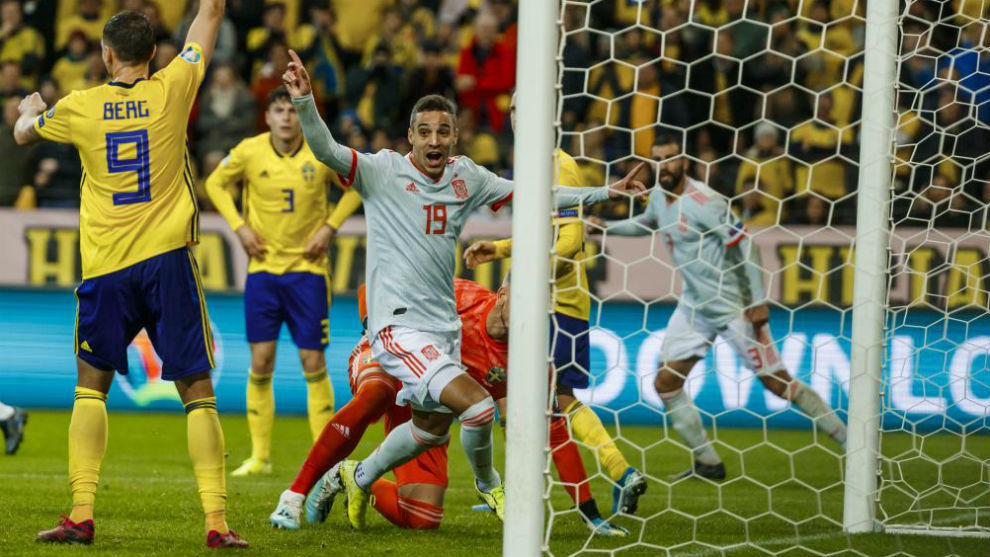 Rodrigo wheels away to celebrate his stoppage-time equaliser, securing Spain’s Euro 2020 berth in the process

With that previous point in mind, Spain have inspired subsitute Rodrigo to thank as he saved their blushes during a match they had no business earning a result from. That seems bizarre to say after a dominant 20-minute spell but the fact the scores were goalless at half-time was more self-inflicted than anything else. Olsen had saves to make but the Cagliari goalkeeper would have been expecting a busy night regardless, given Spain’s creative qualities.

He made five saves, Hertha Berlin’s Rune Jarstein made just two on Friday but the visitors also had Napoli playmaker Fabian Ruiz to thank. The 23-year-old regularly looked to create chances during a match where Sweden’s backline embraced the challenge, particularly after a sluggish start once they begun asserting themselves midway through the first-half.

Eager for the ball, no player had more than his 115 touches here. Comfortably their best performer, questions have been asked over the step-up from under-21 to senior international level but displays this season have proven a welcome advert for his creative capabilities.

He belongs. 94.9% pass success, five duels won, four key passes and three tackles completed, Ruiz comfortably outshone his midfield counterparts against a resilient Sweden side who refused to fold under pressure but were left heartbroken in stoppage-time.