PSG reaffirmed their Group A stranglehold in this year’s Champions League group stage with a Kylian Mbappe-inspired 5-0 blitz against Club Brugge, ensuring their 100% win record remains intact while Thomas Tuchel’s men are still yet to concede after three fixtures.

Mbappe scored upon his return after hamstring and thigh problems against Nice on Friday but started on the substitutes’ bench at the Jan Breydel Stadion.

At half-time, PSG held a slender lead but one that wasn’t exactly watertight – not least with the hosts’ relentless pressing, eager to force defensive mistakes. Mbappe replaced Choupo-Moting early after the restart and well, the rest is history.

He doubled their lead on the hour mark with a close-range header, before turning creator two minutes later to set up Icardi after Clinton Mata dithered in possession. Mignolet made a handful of commendable saves, though his best efforts were not enough to stop Mbappe tormenting the Brugge backline – who couldn’t handle him – while di Maria gleefully created chances galore and proved pivotal in sealing Kylian’s 22-minute hattrick.

With all of that in mind, here’s a look at five talking points from PSG’s latest victory:

#5 Thiago Silva has still got it, Kimpembe was solid too 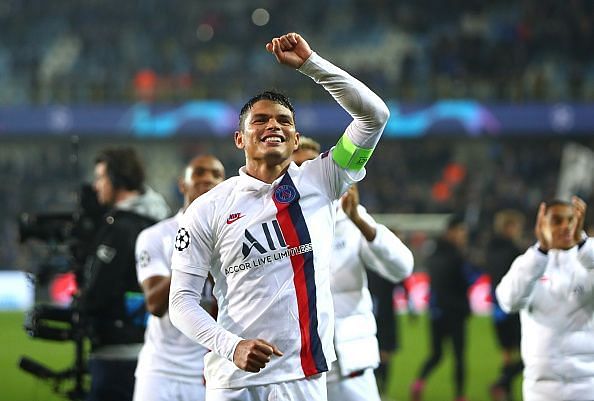 Plenty has been said in recent seasons about PSG, their current levels and whether they’ve really progressed enough to a level where they can win the Champions League. One thing is certain: to win it this season, they will need Thiago Silva more than ever before. He turned 35 last month and remains a key component of PSG’s defence, a dependable captain leading by example at the heart of their backline.

Although this opposition isn’t exactly the type they’ll face after Christmas once the knockout stages return, the Brazilian again delivered another quietly impressive display – one Presnel Kimpembe and others besides have tried to emulate with varying degrees of success over the years.

He completed six clearances, won three duels, one interception and tackle as well as two key passes – an excellent 60-yard ball which kickstarted the move for Icardi’s opener.

His centre-back partner Kimpembe too was solid: both completed 86% of their passes, but the Frenchman won four duels, three interceptions, two clearances (and tackles!) as well as a block. A well-earned clean sheet to boot, this was against the same Brugge side that caused Real Madrid problems aplenty three weeks ago. 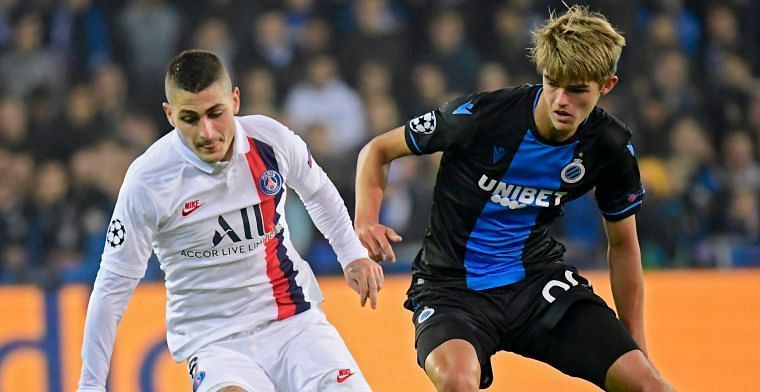 Charles de Ketelaere made his Champions League debut with a surprise start in Brugge’s 3-1-4-2 formation here and despite doing nothing special, he left a long-lasting impression suggesting that his name will be one to remember for seasons to come. Operating alongside captain and Belgium international Hans Vanaken in midfield, this was the 18-year-old’s second senior appearance after featuring in the domestic cup last month.

Booked before half-time for a mistimed sliding tackle on Marco Verratti, it was a challenge he couldn’t have any complaints about in truth. Nonetheless, Charles did the basics well before being replaced near the hour mark, receiving a warm reception from the home supporters for his troubles.

Always scanning for options in attack and supporting players in space, the teenager was unafraid to try things and created a promising chance early on for Krepin Diatta through that same fearlessness. Keylor Navas’ blushes were saved after his attempted clearance ricocheted off the teenager’s back. Moments earlier, Charles sprinted, attempting to harry the Costa Rica international into a mistake and almost earned his reward with a first UCL goal.

Moments after being booked, he created another opportunity: a neatly-worked backheel proved the catalyst for Brugge to counter-attack, though the danger was eventually averted as Emmanuel Dennis was ruled offside.

PSG enjoyed spells with plenty of possession, which saw de Ketelaere often on the periphery off-the-ball but that’s to be expected. With suspended captain Ruud Vormer watching in the stands, it’s clear Brugge have talented youngsters waiting to burst through and Charles did his growing reputation no harm here. 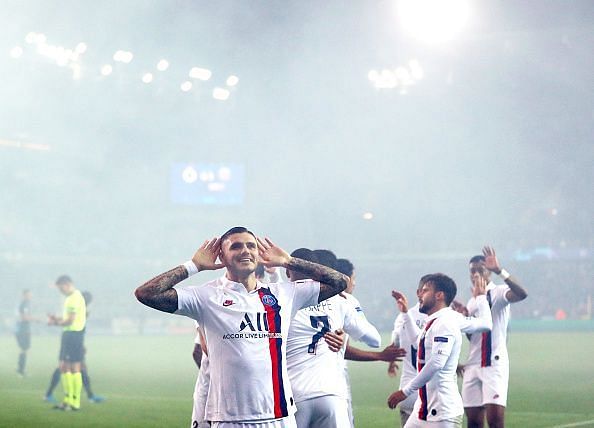 Icardi netted a well-taken brace and on another night, could’ve had a hattrick

A lot has been said about Icardi since his surprise deadline day season-long loan move to PSG. Inter sanctioned their former captain leaving to strengthen a European rival and although PSG already boast a fearsome attack – when all are available – the Argentine marksman just adds more quality to their frontline.

It’s why Edinson Cavani, who has recently recovered from hip and fitness issues himself, was not risked and remained an unused substitute on this occasion. In previous seasons, Tuchel might have felt inclined to include the experienced Uruguayan, but Icardi led from the front and signalled his intentions early on that he could replicate – if not surpass – the 32-year-old’s goalscoring exploits.

He ruthlessly broke the deadlock and silenced the buoyant home crowd after just seven minutes, latching onto di Maria’s clever pass before making no mistake from close-range.

Having established an off-field friendship with Mbappe, the pair combined to ensure Mauro earned his brace before being replaced after the hour mark. He too could have had a hat-trick if not for Simon Mignolet’s outstretched leg thwarting him ten minutes earlier.

He’s now got five goals and an assist in five starts across all competitions. Judging by his trajectory and quality of his teammates, there’s no reason why the 26-year-old cannot surpass his career-high goal (29 in 2017/18) and assist (nine in 14/15) tallies this term. 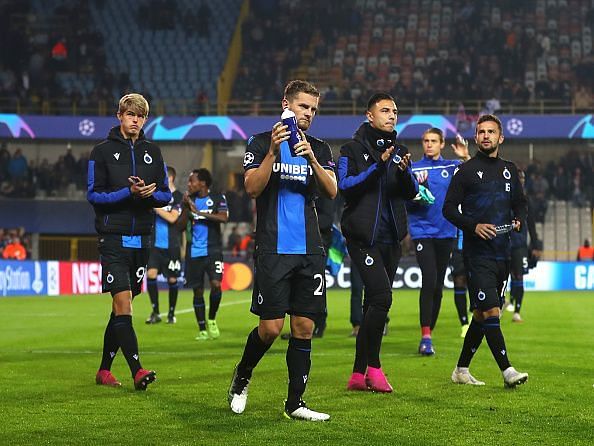 Considering they were 1-0 down at half-time, you can understand how a 5-0 full-time scoreline appears damning from Club Brugge’s perspective: even if they were playing the perennial Ligue 1 champions in PSG, a side with huge Champions League aspirations to boot.

This was their first defeat since mid-May, a 2-0 defeat by Standard Liége. Since then, they’ve gone on an 18-match unbeaten run. However, this heavy defeat was more a necessary learning curve for Philippe Clement’s men, who enjoyed encouraging spells of pressure and half-chances but were unable to sustain that for long enough against a PSG side energised by Mbappe’s arrival.

They simply could not live with him. At the highest level, world-class players like Kylian often prove matchwinners during tricky games and you don’t need to analyse the five goals they conceded to spot a worrying trend: they were beaten too easily by pace, quality passing and a quick-thinking nature that was punished to devastating effect.

The replays of Clinton Mata dithering in possession moments before PSG’s third goal speaks volumes for the issues at hand, just as their backline was split open by di Maria and Mbappe with worrying ease.

Real Madrid have declined in recent seasons and are not without their problems but even the 2-2 draw they salvaged against Brugge at the Bernabeu on October 1 highlighted a key flaw: their game-management, particularly against better sides just isn’t good enough. It’s why after three group games, they sit in the Europa League place and will probably drop into the sister competition after Christmas unless Galatasaray can spring a surprise on them too. 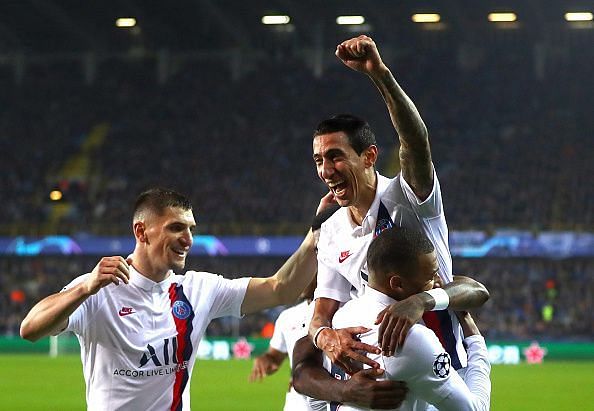 PSG boast a star-studded squad with talent and depth in abundance, not least in attack. But the team is completely different in Kylian Mbappe’s absence, so much so that you could be excused for forgetting an injured Neymar (hamstring) watched this fixture from home comforts in Paris. It’s why many feel PSG has become Mbappe’s team, not Neymar. When you compare the two halves, you can instantly see why.

Mbappe provides electrifying speed, excellent attacking movement and the same fear factor that Neymar commands – with more efficiency, selflessness and less mistakes in possession too. His finishing also continues to improve and it’s why after 27 Champions League games (22 starts), he now has 17 goals and nine assists to his name.

With his first strike of the evening, the World Cup winner eclipsed Lionel Messi to become the youngest player to net 15 UCL goals (20y, 306d). It was his most straightforward of the evening: combining with Angel di Maria before Mignolet parried the Argentine’s deflected cross into his path, heading home from close-range.

Having teed up Icardi for his brace, he then scuffed an effort under pressure at the end of a breathless counter-attack, where he and di Maria combined in transition. That was merely a sign of things to come. Exchanging passes with di Maria and Juan Bernat proved pivotal in the build-up to his brace, unleashing a composed finish having left Mignolet and the retreating defender for dead inside the area.

He wasn’t finished. Di Maria spotted his brilliant movement and duly obliged with another defence-splitting pass, one no Brugge defender could intercept as Mbappe remained composed to complete his first Champions League hattrick. His post-match comments spoke volumes too, personal achievements are great and will continue flooding his way but Kylian is aware of the bigger picture and how important his presence is to PSG’s success.