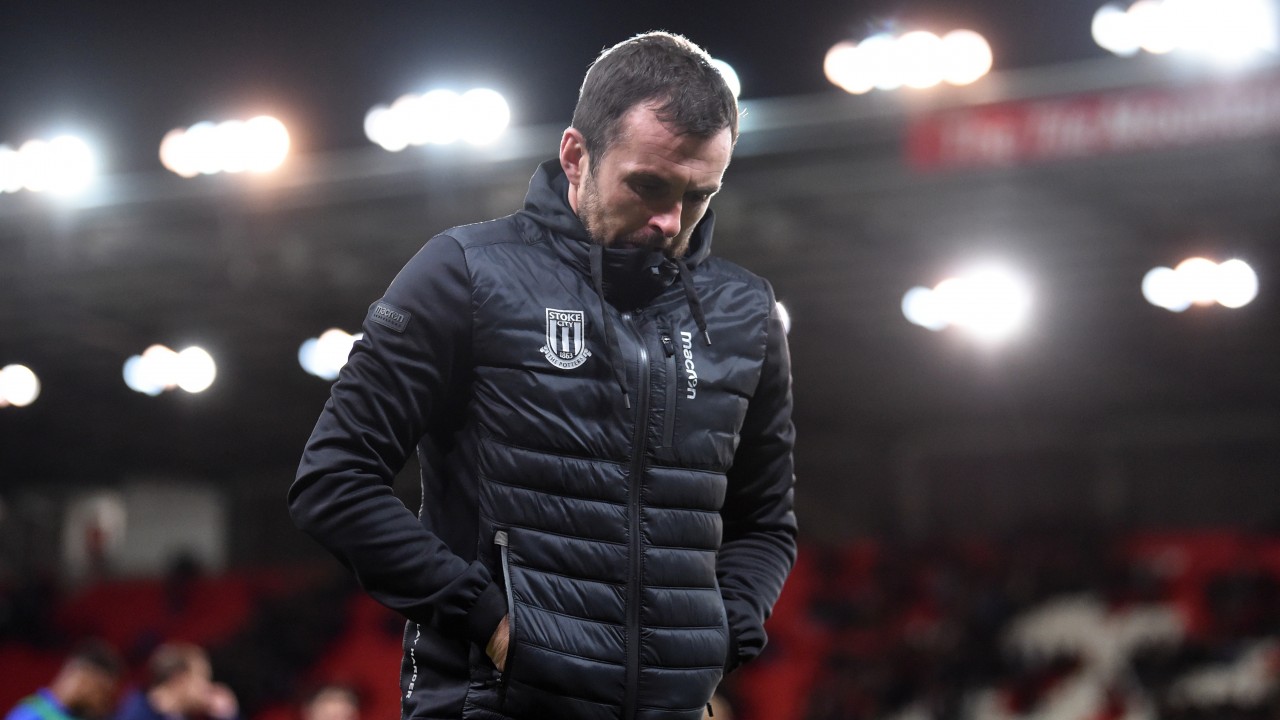 In news that broke this lunchtime, Championship strugglers Stoke City have today sacked under-fire manager Nathan Jones after just nine months in charge. Despite successive wins in mid-October prompted suggestions of a resurgence, the Potters have endured a disastrous start this term: losing 10 of their opening 14 matches.

The club have also confirmed that both assistant manager Paul Hart and first-team coach Joaquin Gomez have departed ahead of Monday’s televised clash with league leaders West Brom.

Rory Delay, Andy Quy and Kevin Russell will take charge of the team in the meantime, while they assess managerial candidates and prepare for Jones’ successor in due course.

In a statement, the 44-year-old Welshman said:

“I would like to thank John and Peter Coates, firstly for the opportunity to manage this Football Club and then for the continued support and patience throughout my time here. I would also like to thank supporters for their fantastic support and wish the Club the very best for the future.”

So, what went wrong?

This news emerging seemed inevitable. Having taken charge on January 9, Jones won just six of 38 games in all competitions with a 16% win ratio.

Plenty has been said recently about the club’s recruitment policy, their collective struggles on the pitch and how Jones’ tactical philosophy was exposed by intelligent opposition who targeted his porous 4-3-1-2 diamond to devastating effect.

Matters were not helped by the fact players – Bruno Martins Indi and James McClean for example – were being selected out of their natural positions to suit the team’s needs.

The final nail in the coffin? Their 2-0 defeat at Millwall last weekend, which was Gary Rowett’s first game in charge of his new side. Stoke sacked him nine months ago.

Jack Butland’s situation rather typifies the mess in Stoke-on-Trent.

Following Gareth Southgate’s comments that it’d be difficult for him to return to the England setup unless playing in one of Europe’s top leagues, he took action.

Butland made intentions clear this past summer that he wanted a transfer back to the Premier League or elsewhere in Europe.

Aston Villa and Bournemouth were Premier League clubs said to be monitoring his situation, while Euro clubs were also interested but reportedly put off by Stoke’s £30m valuation for one of their key players.

He stayed put, struggled to recapture his match-winning Premier League form with a dwindling backline supporting him and received criticism aplenty having made multiple glaring individual errors.

Butland has since lost his first-choice status with Adam Federici replacing him, speaking volumes for the problems at hand. It’s deeper than the management.

Club captain Ryan Shawcross (ankle) has been sidelined since their final pre-season fixture back on July 27 and the defender’s injury couldn’t have come at a worse time.

Although the influential centre-back is said to be returning to light training, he’ll do so under new management with multiple reports speculating a return for Tony Pulis is on the cards.

Chris Hughton and Alex Neil are among the frontrunners for the hotseat in Stoke-on-Trent, which has become somewhat of a poisoned chalice recently.

Hughton has stressed his desire for a Premier League return after being sacked by Brighton back in May, while Neil currently manages fellow Championship side Preston.

With that in mind, it’s unlikely either would be willing to commit given the current situation.