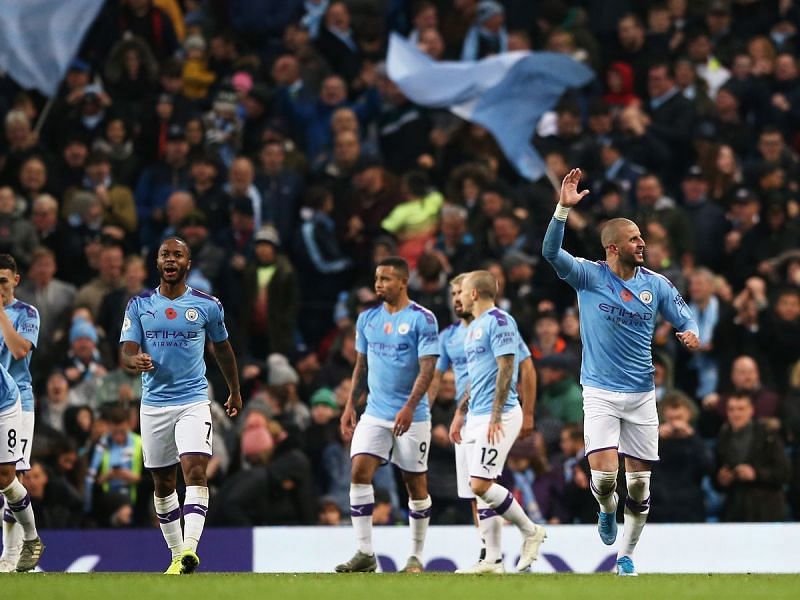 Late strikes from Sergio Aguero and Kyle Walker proved enough for Manchester City to snatch a nervy win against a determined Southampton display at the Ethiad, just eight days on from the Saints’ record-breaking 9-0 defeat by Leicester.

City dominated the early exchanges but found themselves a goal behind early on, as Stuart Armstrong’s powerful low drive forced an error from Ederson. He fumbled the strike but was unable to comfortably smother it, as James Ward-Prowse timing his run perfectly to capitalise from close-range with the rebound.

The hosts responded with increasing waves of attacking pressure, creating goalscoring chances aplenty – though Southampton were prepared for the onslaught and defended valiantly to protect goalkeeper Alex McCarthy, making his first league start for eight months.

John Stones watched his headed effort flash over the bar while Aguero, Ilkay Gundogan, Bernardo Silva and Kevin de Bruyne all came close with respective efforts. As time ticked on though, tensions continued to rise – especially as City have trailed at half-time on three occasions over the past two seasons, losing all three games. Today proved different.

Kyle Walker fizzed a low ball across the box for Aguero, who made no mistake and fired through McCarthy’s legs to level the scoring. His ninth league goal this term and their breakthrough after a whopping 19 attempts on-goal, it spurred them on in search of a late winner.

They eventually earned that, as Angelino’s inviting cross was poorly dealt with in the So’ton box. The ball fell to an off-balance Walker, quickly improvising as he struck goalwards with a half-volley that McCarthy – caught in no man’s land – couldn’t save.

Without further ado, here’s a look at five talking points from a wet and frenetic afternoon’s action in Manchester during a game that could’ve gone either way:

This was a frustrating game for City, but especially one Raheem Sterling had to endure. Operating down the left against Yan Valery, the pair were regularly engaged in competitive duels for possession and Sterling didn’t always get the better of the determined teenager.

Southampton’s early opener saw Angelino venture forward and remain there as more of an auxiliary left-sided winger, adding another option with further width to City’s attack. That shift should have prompted Raheem to roam further into dangerous pockets of space near central areas, but it wasn’t something he could do confidently given So’ton’s defensive shape and how they looked to continually frustrate their hosts off-the-ball.

Pep barked orders at the Englishman to get himself more involved, often cutting an isolated figure on the far side. Despite a few promising moments, there was more emphasis on battles between himself and Valery in the game’s first hour.

Despite impressive form of late, Sterling wasn’t enjoying his best display on this occasion but again persisted in attempts to create chances as time wore on and legs got heavy. He showed he’s capable of doing so with those trademark slaloming runs around the area, though decision-making in crucial moments left a lot to be desired: something we’ve grown accustomed to not say about his game recently.

Late on, Sterling should’ve teed up Gabriel Jesus on the counter-attack but was stuck in two minds on whether to go solo or bait the defender into a tackle – did neither and got dispossessed. That move rather typified his afternoon and given his ever-growing importance to their attack, is a key reason why it took City so long to get truly settled.

#4 Subtlety from Redmond and Ings key to Saints success

Redmond and Ings were important in different ways, despite struggling to create chances after their opener

It’s fitting that in this fixture two seasons ago, Pep received criticism for his impassioned post-match discussion with Nathan Redmond. After all, Redmond wasn’t one of his players. Confronting him as he did could be construed as a number of things, not least arrogance and disrespect towards an opponent: which could’ve easily escalated if context of their conversation was not quickly apparent.

Two years on, Redmond was quietly instrumental in Southampton’s success here while reiterating how frustrating he can be to watch too. Despite being a winger by trade, he started alongside Danny Ings in Ralph Hasenhuttl’s two-pronged attack. Pre-match, he would’ve been made aware their chances would probably be scarce against a City side who love possession galore, with discipline and patience being tested.

His role in the build-up to Ward-Prowse’s opener cannot be understated. Having beaten his marker down the flank, he scanned for options and patiently waited before teeing up Armstrong on the edge of the box.

Subtle moves and decisions like these proved crucial in So’ton earning their early advantage – though one they couldn’t retain in the dying embers. Redmond completed three of his four attempted dribbles, carried the ball well and was equally an off-the-ball threat just like strike partner Ings as City were harried into quick distribution.

As to be expected, the pair’s influence waned once the Citizens asserted their foothold on the match but neither was really afforded a proper goalscoring opportunity.

City fans were nonetheless forced to endure a few heart-in-mouth moments when John Stones and Ederson in particular relinquished possession cheaply or looked certain to, under immense pressure from Southampton’s frontmen who led by example with their relentless pressing and defensive contributions.

Between them, their match stats: 10 duels won, three tackles and dribbles completed, two key passes, one interception and blocked shot. They were unlucky not to prevail. 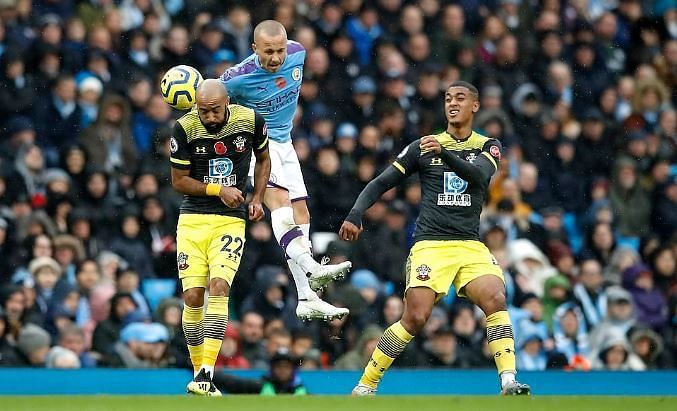 Despite the hosts conceding early, it was a welcome baptism of fire for Angelino on his first City start

Today marked Angelino’s first Premier League start for Manchester City. The 22-year-old Spaniard – signed for £10m from PSV in July – initially joined the Citizens‘ youth set-up back in 2013 from Deportivo. Despite impressing in the youth set-up and on various loan spells, City opted to cash in with PSV Eindhoven among numerous European sides interested – considering they couldn’t guarantee him first-team minutes at the time.

16 months down the line and November 2, Angelino was excitedly preparing for his first league start. It’s been a long time coming indeed. Ward-Prowse’s goal after 13 minutes – despite not being at fault – quickly made it a nightmare start.

So a positional change with different responsibilities, seeing as City were now behind, was necessary. It granted Angelino the licence to fly forward and create another wide option for Southampton to contend with, as overlapping opportunities and the quality of his deliveries also tested over the 90 minutes.

Despite lofting a promising chance towards Aguero’s path early on, his crossing was largely inaccurate or easily dealt with. That’s unsurprising given City don’t possess the height or aerial expertise to justify flooding the opposition area with crosses galore.

However, he persisted and needed to during a game where you’d wonder if they would ever score at times such was their dominance without reward. He won five duels, completed one tackle and clearance while recording a game-high 118 touches with 81.7% pass success rate. This wasn’t the game to hide and Angelino played a pivotal role late on, too.

His cross created all kinds of indecision in the box between McCarthy, his defenders and ultimately Walker’s improvised finish saw them snatch all three points – holding their nerve in dramatic fashion. All things considered, this baptism of fire should stand him in good stead with tougher fixtures coming thick-and-fast.

Although their hearts were broken late on, Southampton can take credit from their collective display here

This display had everything you could’ve asked for from Southampton’s perspective: organised, cynical fouls at crucial moments, playing for one another, a goal – scruffy or not – a proper defensive showing just a week after their horror show against Leicester.

So why couldn’t they perform like this last Friday? Ryan Bertrand’s early dismissal wouldn’t have helped matters, but the team collectively capitulated 20 minutes in against a Foxes side hungry for more goals and energised by their numerical advantage as things continued to worsen.

Pre-match, club legend Francis Benali stressed this game would be a test of “damage limitation” against the champions. Not only did they prove him and other critics wrong, they proved their capability to deliver rearguard defensive displays and won’t be playing teams with Manchester City’s attacking options nor champion spirit very often either.

Captain Pierre-Emile Hojbjerg had to fill into an unfamiliar role at left wing-back, as Hasenhuttl made three changes to the side who lost 3-1 to City (EFL Cup) in midweek. Despite an early booking, he was quietly effective and continually a nuisance for City players to contend with in transition – keeping his composure and managing dangerous situations well.

Between the centre-back trio of Vestergaard, Stephens and Bednarek, they completed 44 clearances, six blocks, five tackles and interceptions over the 90 minutes. Valery battled hard against Sterling, Romeu was kept busy in midfield while goalscorer Ward-Prowse was probably their best player throughout. Their forwards worked tirelessly without much service too.

Their next six games? Everton, Arsenal, Watford, Norwich, Newcastle, West Ham. All are winnable fixtures they should aim to earn a good points haul from as they attempt to turn their season around, after only eight points after eleven matches (18th) this term.

Walker wheels away to celebrate his first league goal for a year, securing all three points in a tense finish

It was coming. City were probing, pressing for that all important equaliser and once that breakthrough arrived, there was a sense of inevitability that they’d get a late winner too.

Kyle Walker went from creator to scorer in 15 minutes: teeing up Aguero with a ball fizzed across the box. Although the Argentine like many of his teammates was frustrated and not at his razor-sharp best, a player of Sergio’s ability was never going to miss from close-range.

His ninth league goal of the campaign, you could sense a collective sigh of relief reverberated around the stadium as the resistance was finally breached. Walker then went on to score his first league goal since September last year late on, with the visitors’ backs truly against the wall at this point. What a time to get it, too.

This season has been a difficult one thus far for the experienced English fullback: battling inconsistency with injury, illness, being omitted in the short-term from Gareth Southgate’s NT plans and the big-money arrival of Joao Cancelo as competition for his place this summer.

Having returned to start during their 3-1 Cup win in midweek, he started again on this occasion and despite a challenging afternoon’s work, enjoyed the last laugh against a determined Southampton display, eager to prove their doubters wrong. They very nearly did.

City face away trips to Atalanta and league leaders Liverpool this coming week, before an international break separates an intriguing clash in store against Frank Lampard’s Chelsea. The season doesn’t get any easier from here, though the manner of this win should provide a morale-boosting one despite the Reds’ late away victory at Villa Park elsewhere today.