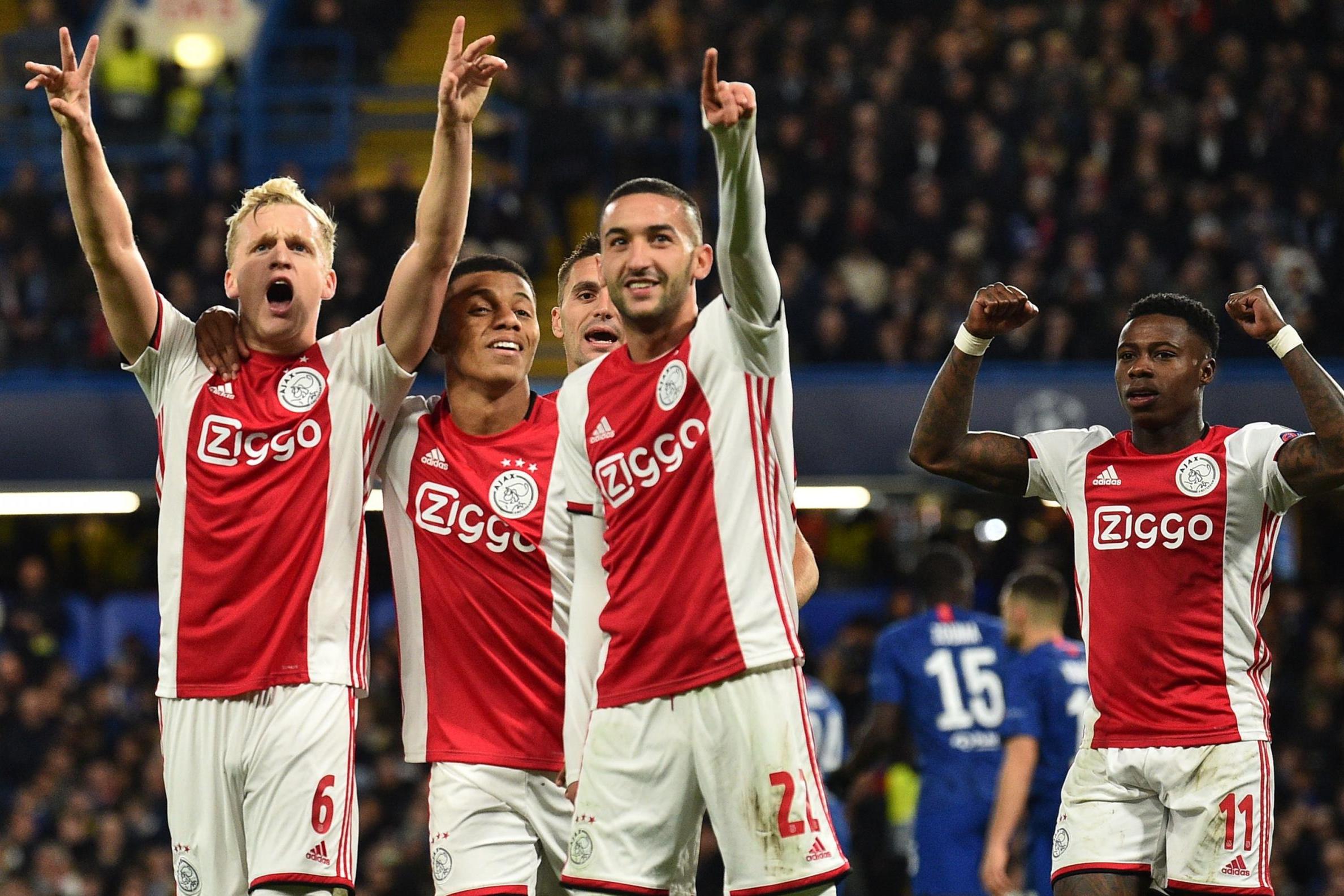 Reece James became Chelsea’s youngest Champions League goalscorer as they completed a stunning second-half fightback against nine-man Ajax, but the visitors were brilliantly defiant despite tricky circumstances on a breathless evening in west London – where the scoreline certainly doesn’t tell the full story.

With both teams level on points ahead of MD4 in Group H, this was always going to be a fascinating encounter – not least after Michy Batshuayi’s late winner in the reverse fixture last month.

He came on for a jaded Mateo Kovacic (87′) with even less time to make an impact and despite some threatening work, saw his goalbound effort denied by Andre Onana’s outstretched left arm. 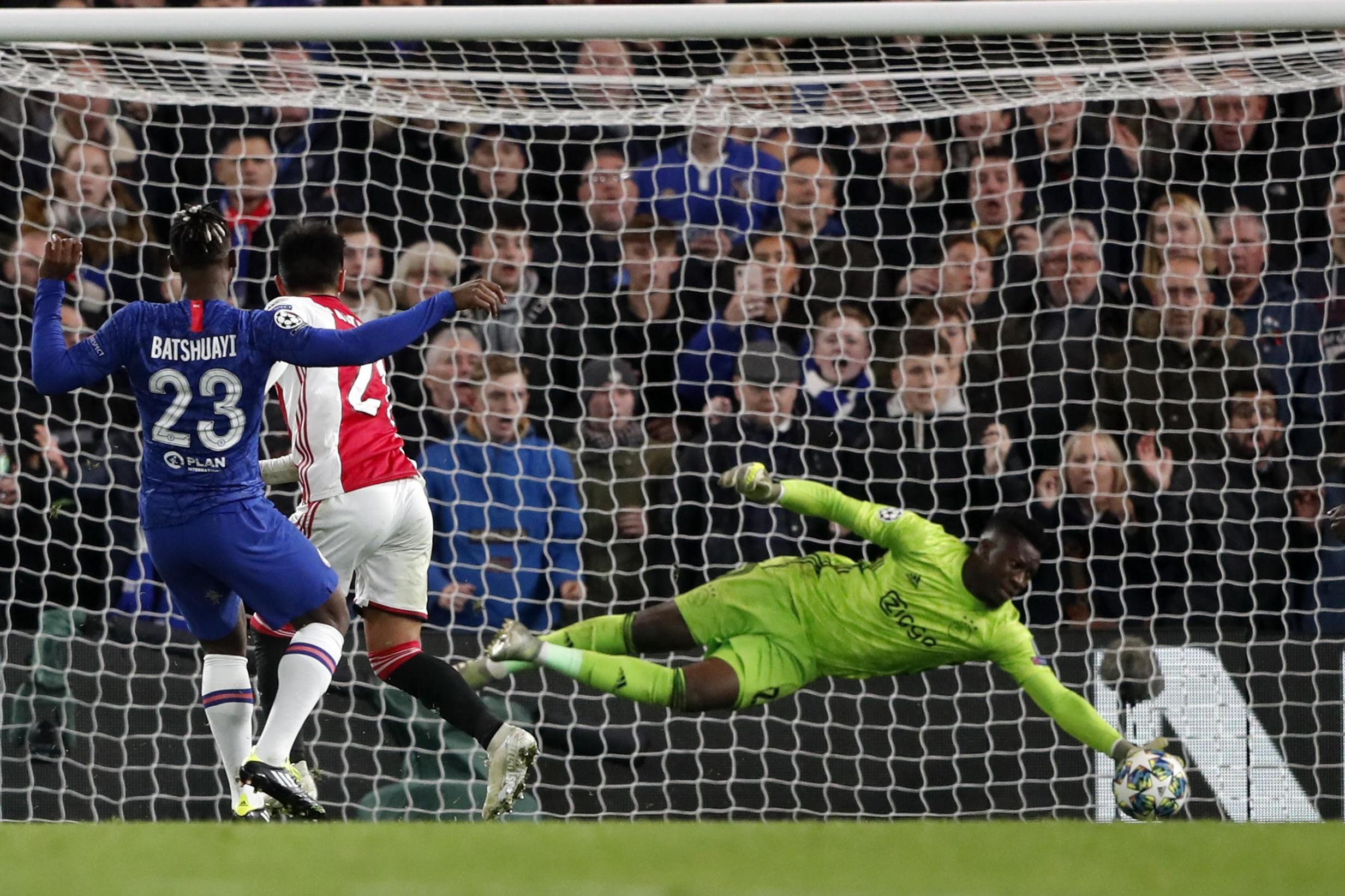 Onana made a crucial save denying substitute Batshuayi late on, ensuring Ajax shared the spoils

In a frantic spectacle which left everyone wanting more, especially given the bemusement of just four stoppage-time minutes, this was certainly a game of perspectives. Who emerges from this result the happier side?

Chelsea recovered a seemingly insurmountable 4-1 second-half deficit, though did so with a two-man numerical advantage while the manner of their goals was fortunate.

After a well-worked move, captain Cesar Azpilicueta slotted home an important second goal with half-an-hour still to play. A sliding Tammy Abraham prodded the ball goalwards but the experienced Spaniard didn’t take any chances and made no mistake from close-range.

Six minutes later, a plethora of Ajax players surrounded the referee to express a similar sense of disbelief too: their two central defenders had both been sent off in the space of ten seconds and a second Chelsea penalty had been awarded. 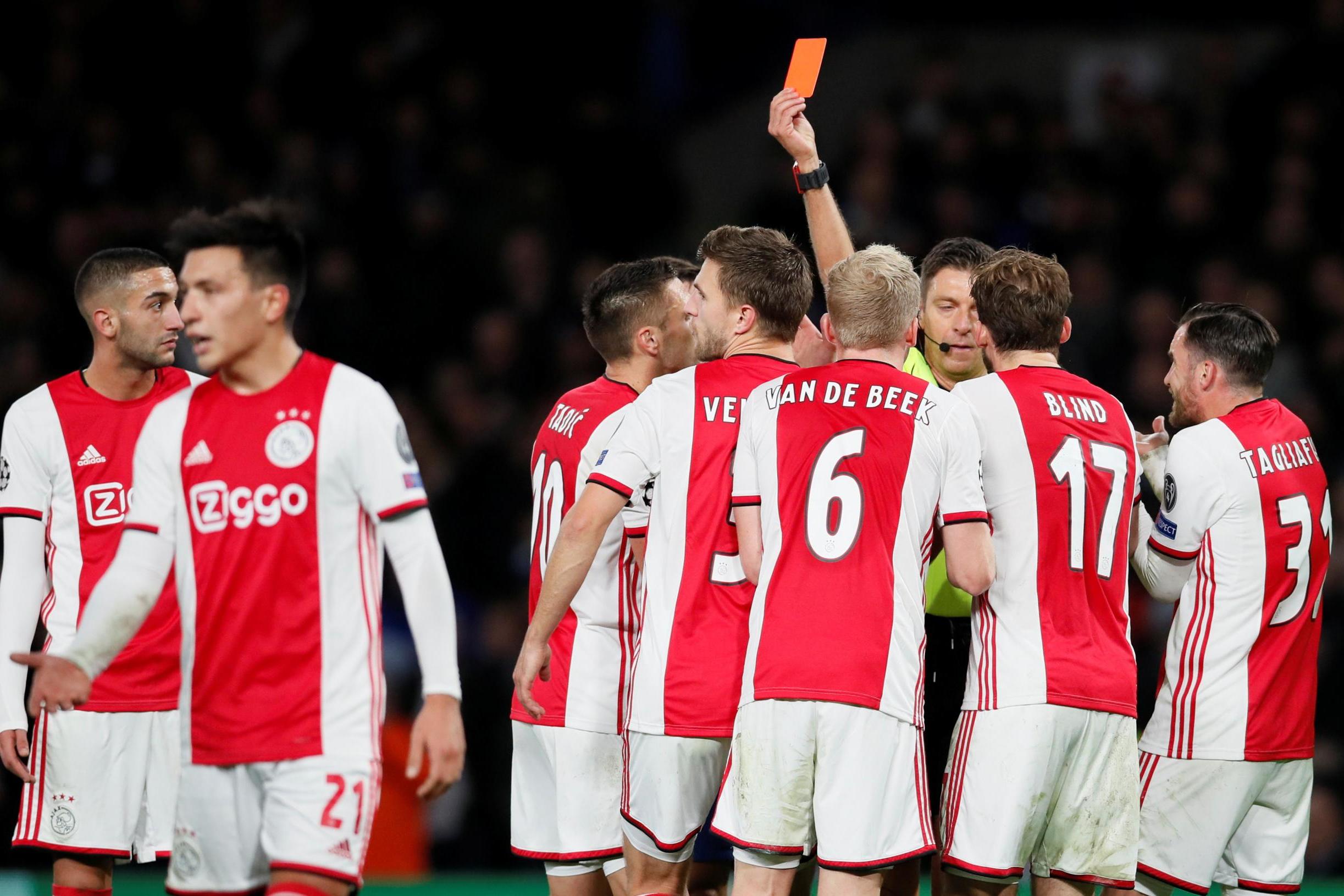 The pair were involved in the hosts’ unlikely comeback for different reasons, though given their top-level experience? This should never have happened.

Having already been booked, Daley Blind panicked and committed a sliding foul on Abraham moments after being hurtled off-balance himself by a marauding Christian Pulisic – who won the previous penalty in a relentless first ten minutes.

Despite being in a dangerous area and Chelsea’s counter-attacking opportunity was evident, lunging forward as he did was needless. Referee Gianluca Rocchi played advantage before substitute Callum Hudson-Odoi’s effort was inadvertently blocked by Joel Veltman – also on a booking.

The referee pointed for a spot-kick, Veltman was sent off for dissent after arguing the official’s decision while Blind’s previous challenge also caught up with him: being given his second booking for a needless foul that ultimately helped Chelsea.

Just like that, the pendulum swung once more. Jorginho stepped up, made no mistake again to convert from 12 yards and suddenly Chelsea had 20 minutes to complete their comeback – one that 15 minutes earlier seemed dead in the water.

It was highly-rated midfielder Donny van de Beek who applied the finishing touch, just like he did to Juventus and Tottenham last term. Nonetheless, Ajax’s free-flowing build-up play was kickstarted after great work down the right between Noussair Mazraoui and playmaker Hakim Ziyech, comfortably the best player on an unforgettable evening. 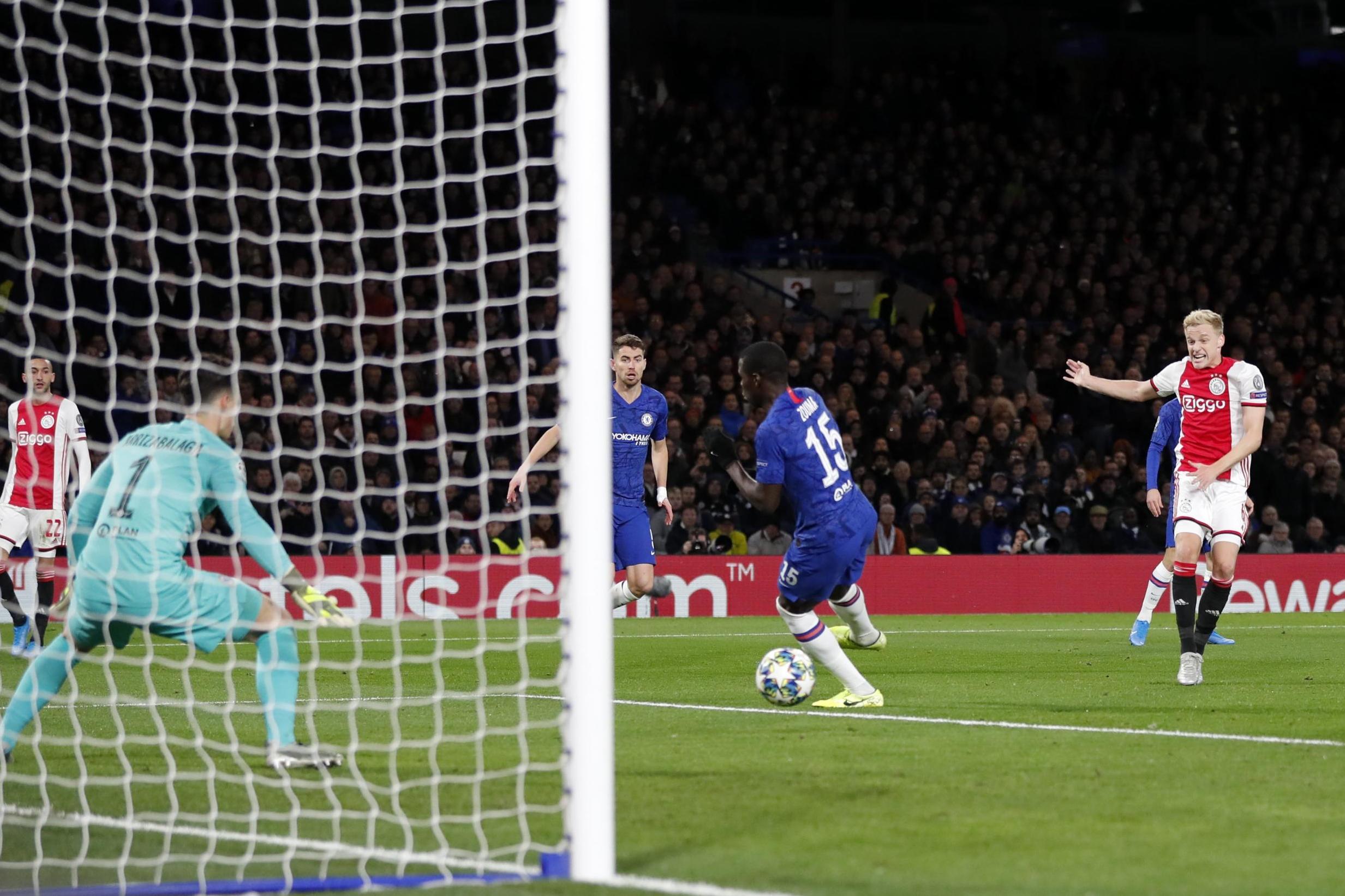 An excellent first touch and ruthlessly efficient second, Kepa Arrizabalaga had no chance. Chelsea’s £71.6m goalkeeper should have done better with Ziyech’s wicked free-kick, though.

Marcos Alonso’s foul proved costly, as Ziyech curled his effort high and deep into the box, watching it fly through the air. Despite attempting to claw it away in an awkward position, Kepa was helpless and watched the strike cannon in off the far post and onto his face before trickling in.

Quincy Promes headed Ajax back into the lead from close-range after 20 minutes, having been fed by a devilish Ziyech pass: the type of delivery attackers dream of. That was after his free-kick created the perfect start for the Eredivisie champions, less than two minutes after the first whistle had blown. 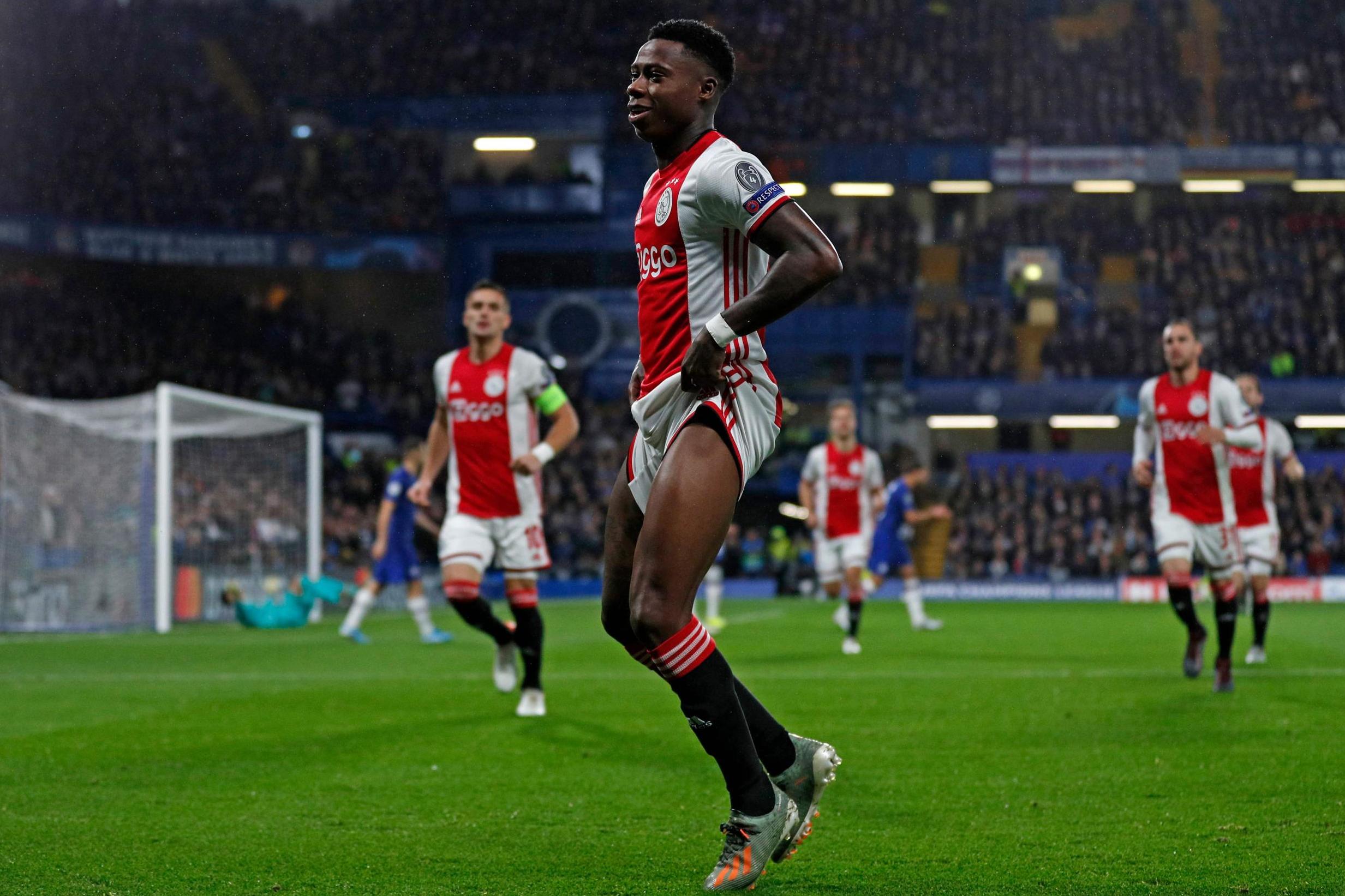 Officially credited as an Abraham own goal, his powerful delivery flew through mid-air and missed everyone, catching Kepa unsighted through a sea of bodies at his near post.

However despite an impressive display by the Netherlands international, Quincy didn’t get the last laugh. James reacted quickest – ahead of Promes – after Zouma’s power header cannoned back off the crossbar, firing hard and low into the bottom corner for his first Champions League goal.

Having made history with his memorable substitute appearance on this occasion, it’s inevitable the versatile 19-year-old will be granted more first-team responsibility, just like Abraham/Mount/Tomori before him.

The images of his teammates sprinting to celebrate that emphatic equaliser were heart-warming, considering he – just like a handful now – has been at the club since the age of six within their academy. 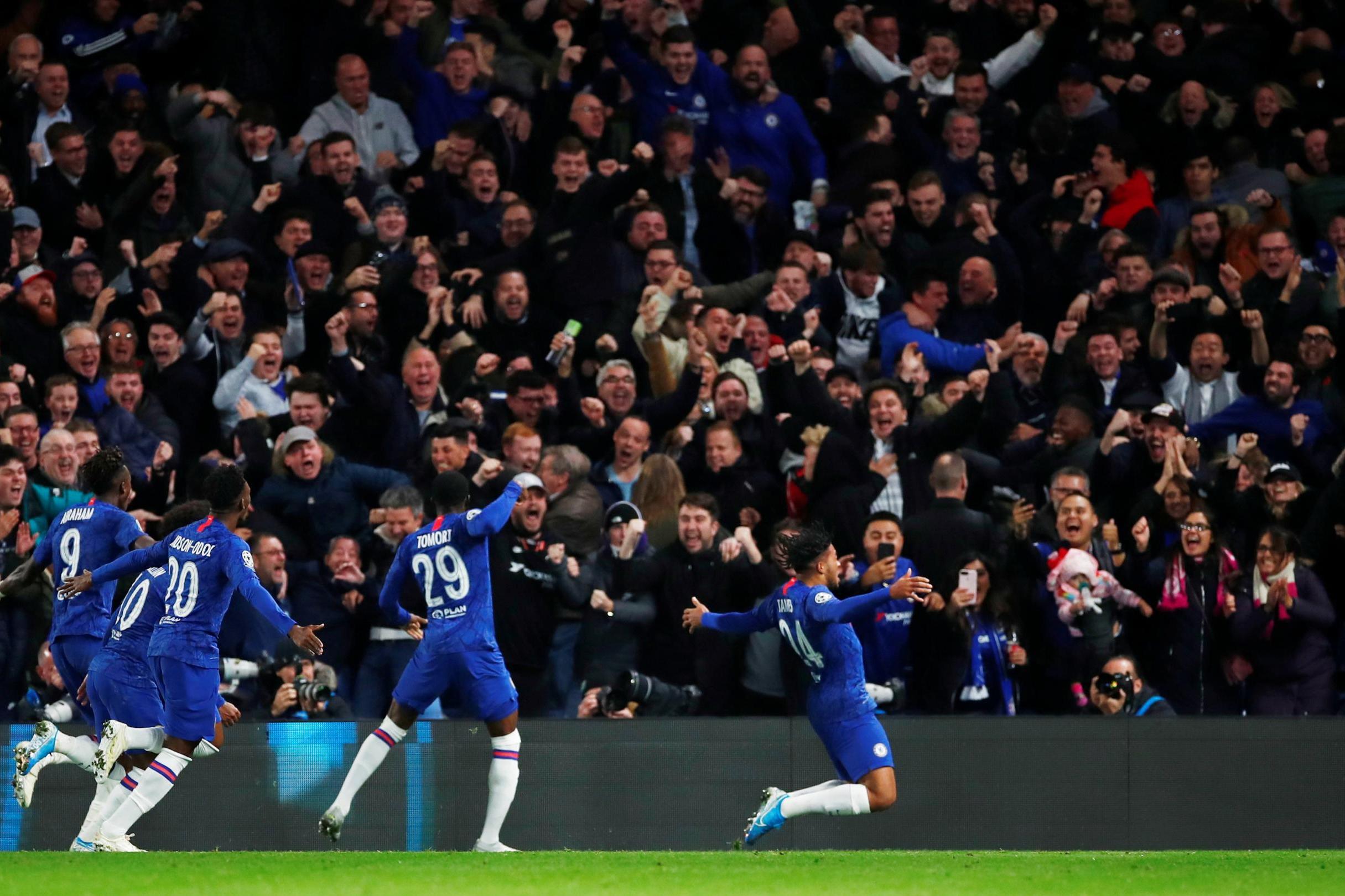 They may have been 4-1 up but given the circumstances, the Ajax players should hold their heads high after an admirable display. Somehow surviving Chelsea’s early onslaught after the restart, soaking up pressure then hitting them into hushed silence was beautiful – even if their celebrations proved short-lived.

You’d be forgiven for thinking the Blues were 3-1 up early in the second-half, such was their dominance in terms of chance creation. Abraham, Pulisic and Hudson-Odoi all threatened, while Lampard’s inspired substitutions put them firmly in the ascendancy.

Mason Mount’s ankle injury presents an immediate worry for club and country, though Frank Lampard revealed he’ll be assessed tomorrow after limping off near the hour mark. 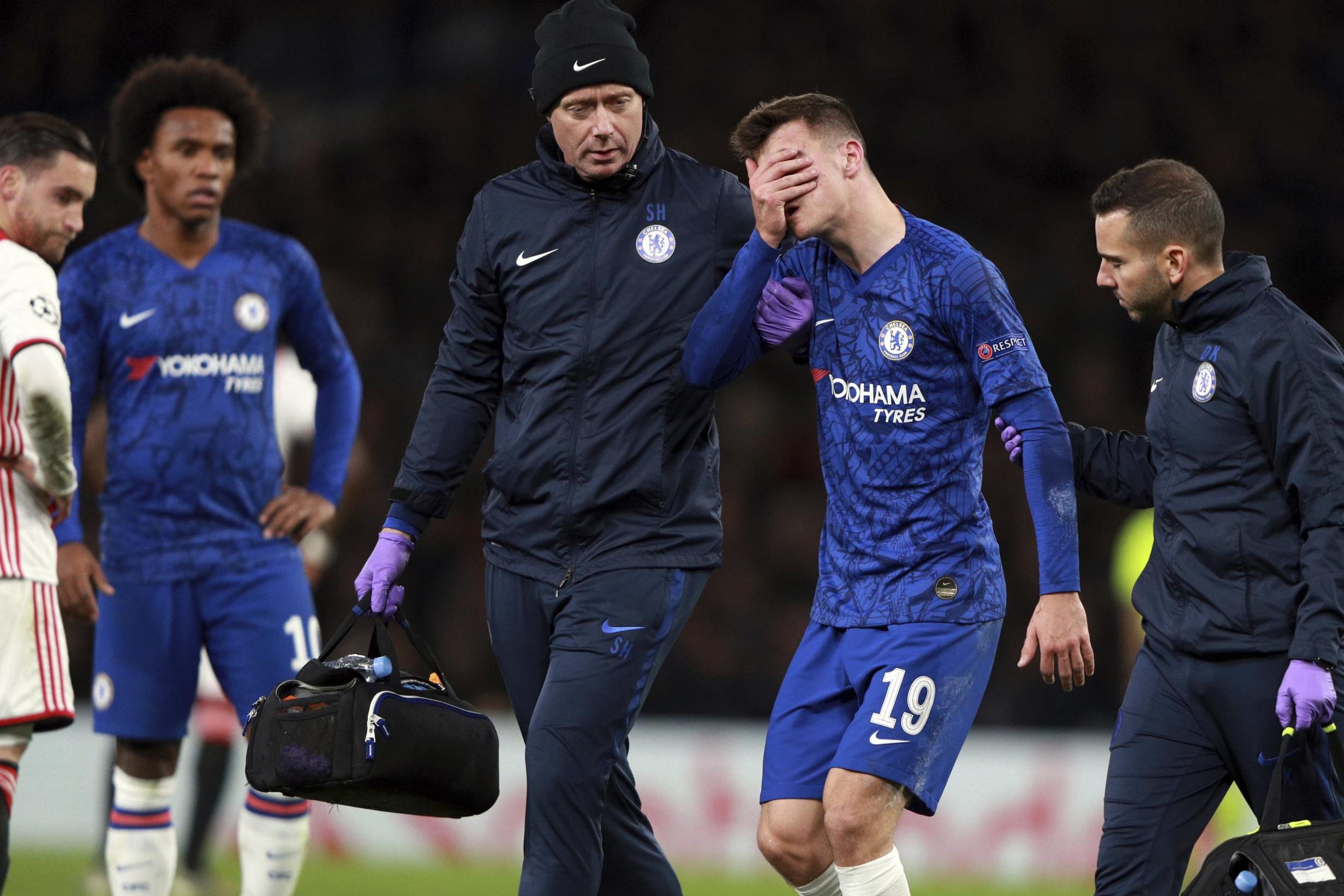 The new handball rules need amending at some stage because for all the criticism VAR has received, no-one can yet definitively justify what is and what isn’t a handball – case in point being the Veltman incident.

Edson Alvarez forced a late save from Kepa as Ajax defiantly pushed for a killer fifth goal, even despite being down to nine men. Defending heroically, ten Hag couldn’t have asked for much more from his players after his most experienced duo let him down.

Despite Chelsea’s youthful exuberance, fighting spirit and likability under Lampard, defending remains their Achilles heel and Ajax ruthlessly exposed them on this occasion.

This is the first time they’ve conceded four in a UCL game since April 2009, third time in club history – while a fearless Ajax side will be left heartbroken even though they deserved better.