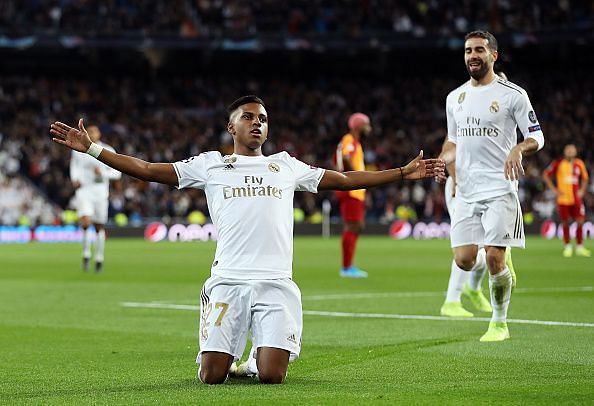 ​Real Madrid have all but secured their place in the Champions League last-16 after a dominant 6-0 win over Turkish giants Galatasaray at the Bernabeu. Rodrgyo’s early double and a Sergio Ramos penalty saw Los Blancos race into a three-goal advantage after the first 15 minutes, allowing them to control the game with ease.

Rodrygo broke the deadlock after just four minutes, leaving Mario Lemina sliding across the turf in his wake before drilling a low effort into the bottom corner with aplomb after Marcelo’s cross-field pass.

Just two minutes later, he doubled Real’s early lead after good work between Toni Kroos and Marcelo saw the Brazilian earn his second assist in as many minutes: floating a teasing cross towards the six-yard box, where his compatriot made no mistake to head into the far corner. Fernando Muslera had no chance.

VAR was called into action and after the referee reviewed camera replays on the pitchside monitor, awarded a Madrid penalty after 13 minutes. Steven N’Zonzi’s needless foul on Kroos was eventually punished, though initially play was allowed to continue before the decision had been correctly overturned. Captain Sergio Ramos made no mistake from twelve yards with a Panenka to further extend Real’s commanding lead.

Casemiro had a goal disallowed for offside as Real hunted more goals, but were given a gift on the stroke of half-time. Yuto Nagatomo’s slack attempted pass for Marcao was cut out by an alert Rodrygo, who fired across the area to present an easy tap-in for Karim Benzema.

If not for Muslera’s point-blank save to deny Eden Hazard in stoppage-time, Galatasaray would have been 5-0 down before the interval. Despite both sides making changes, Real’s lead remained intact and the visitors had Muslera and some lax decision-making to thank for that, as the hosts understandably took their foot off the proverbial pedal.

Benzema completed his brace with another straightforward finish after work from Luka Modric and Daniel Carvajal, whose drilled pass was converted from close-range.

Then with the game’s final kick, Benzema turned creator after combining with Rodrygo on the edge of the box before releasing a clever through ball for the teenager to slot home. Without further ado though, here are five talking points from a memorable Real victory:

#5 Despite looking good on paper, Galatasaray frustrate yet again 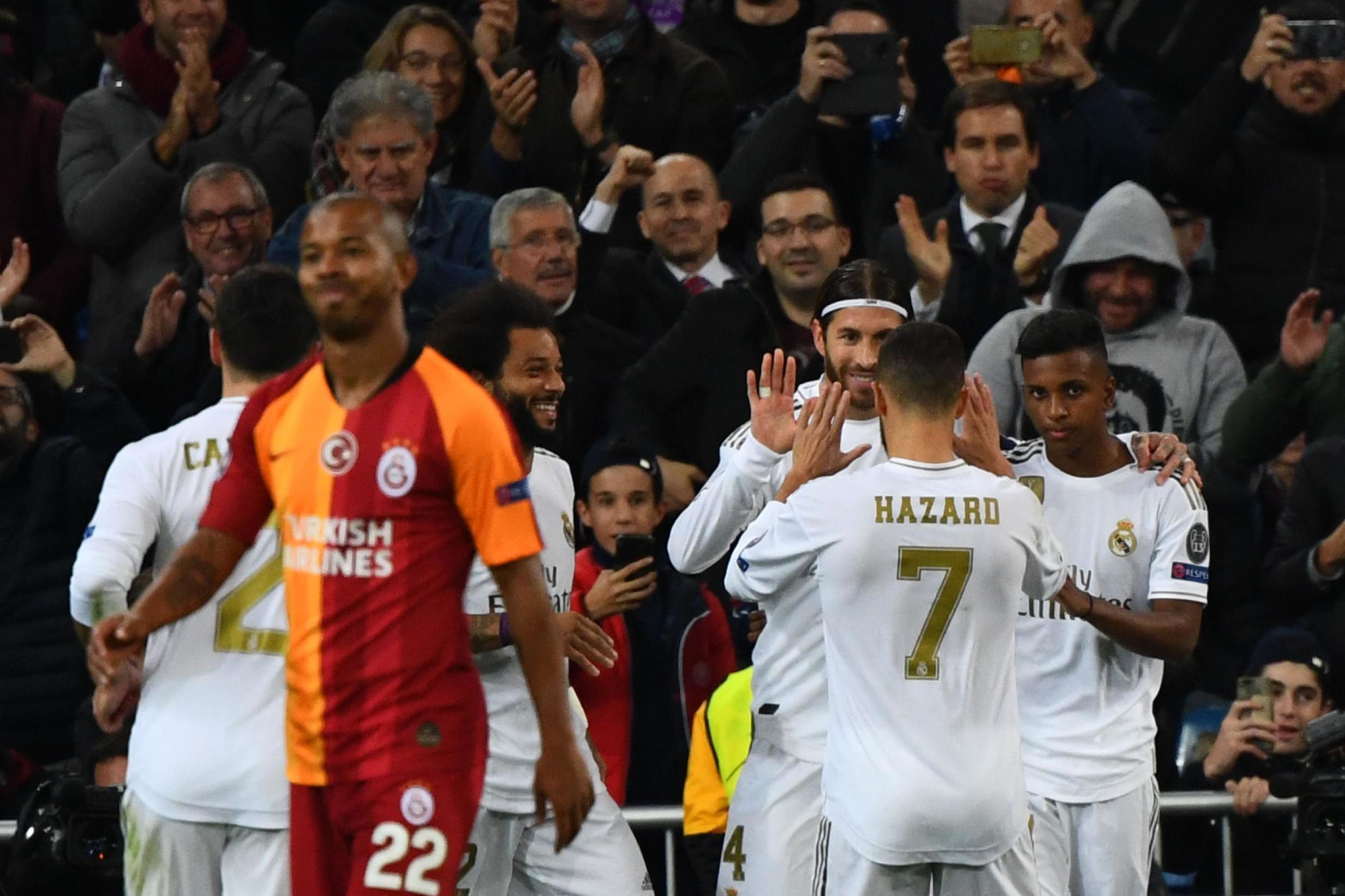 Galatasaray started slowly, were duly punished and never got into proceedings

Stats can be deceiving. Ahead of this fixture, Galatasaray had conceded two goals in their three previous group games and plenty was said about how their dogged backline could prove a stumbling block for Real. Those comments were made redundant within the first 15 minutes. They’ve now conceded eight in four matches and sit bottom of Group A.

They are a Europa League team with inflated Champions League status, having enjoyed previous success in the competition many years ago. They haven’t progressed past the group stages since 2012-13 and 13-14, where they also had difficult group stage opponents but better cohesion as a collective unit.

Now, their three best players are all on season-long loan deals in Turkey: Steven N’Zonzi (Roma), Jean-Michael Seri (Fulham) and Mario Lemina (Southampton), while the future doesn’t look particularly bright with regards to their youth prospects either.

Unsurprisingly, the midfield trio struggled to contain Real’s multiple threats and while N’Zonzi is traditionally viewed as the defensive protector, his influence was made insignificant early on after conceding the spot-kick after fouling Kroos – receiving a booking too.

Lemina was busy and clearly tried, but made to look silly a few times in the build-up to Real’s first-half goals. Seri won duels and buzzed about, though couldn’t contend with Federico Valverde’s incessant pressing and the subtle brilliance of Kroos. Speaking of…

#4 Toni Kroos oozes his class, leading by example in midfield 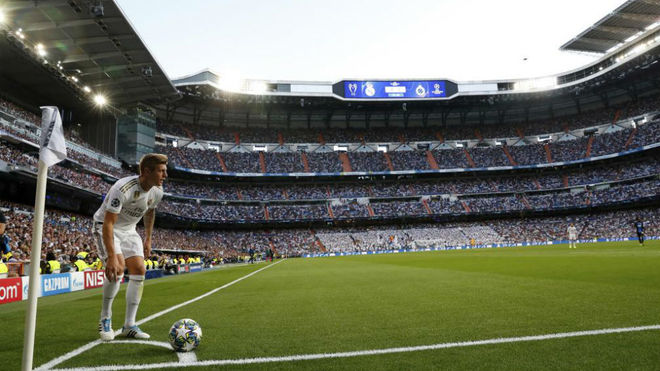 Kroos was subtly brilliant as usual on this occasion, orchestrating from deep

Just like usual, this was another commendable midfield display by Toni Kroos – who has personally enjoyed a good start to the 19-20 campaign. The 29-year-old German international leads by example there and while Luka Modric’s decline is evident for all to see, his younger counterpart continues to orchestrate attacks and create chances with seeming ease from deep-lying roles.

Over the 90 minutes, only Carvajal (119) had more than Kroos’ 113 touches and the midfield metronome didn’t shy away from his defensive duties either in a match that could have proved difficult, if not for Real’s rapid start to proceedings.

Although not officially credited with an assist for any goals tonight, he played a significant part in their first three: releasing Marcelo with an inch-perfect pass, from which the Brazilian fed Rodrygo. For their second, he remained composed and aware to receive the ball on the turn inside the area, leaving N’Zonzi in his wake before quickly scanning options for a pass.

Again, Marcelo was there to receive and teed up his compatriot. Casemiro or Valverde for example, probably would have passed backwards or sideways, their attack snuffed out and the opportunity gone. After a lengthy delay, he also won the penalty Ramos converted having baited N’Zonzi into a needless challenge and enjoyed another subtly brilliant display: 91% pass success, five duels won, two key passes and tackles completed.

Isco has flickered in-and-out of the team with injuries and inconsistency, while Modric and James Rodriguez are both unreliable creative outlets despite their obvious abilities. If Real are to go deep in this year’s competition, they’ll need Kroos at his best. 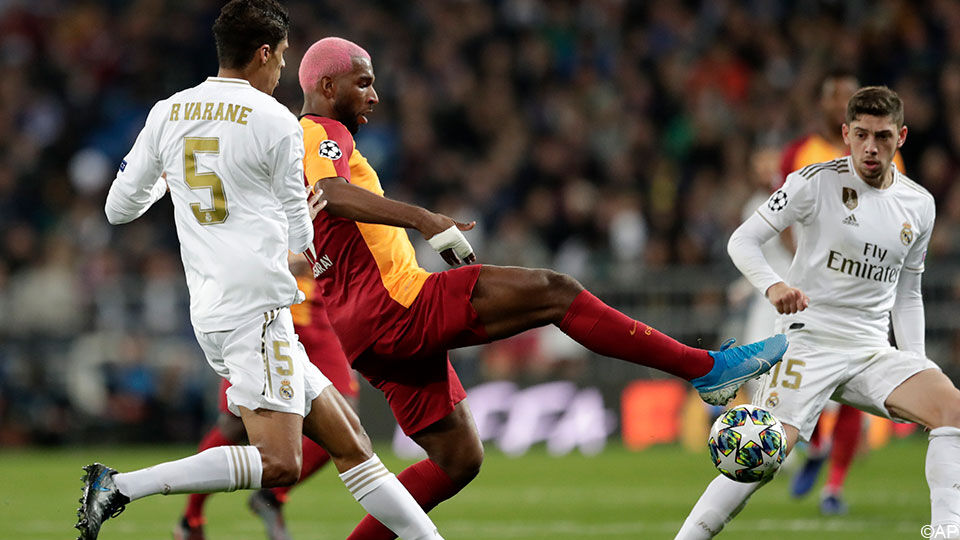 For a player of his top-level experience and ability, those numbers just aren’t good enough nor was he as effective as the reverse fixture on MD3 where Real earned a hard-fought win.

Lemina felt inclined to go solo when driving forward through midfield, rather than pass into Babel. That alone emphasises the lack of confidence his teammates had that he’d create a chance, leaving Florin Andone increasingly isolated on his own in Faith Terim’s 4-3-3 setup.

It also begs the question: Why didn’t Terim alter things at some stage after half-time, considering Real had eased considerably and Galatasaray were busy trying to lessen the deficit? N’Zonzi’s early booking and subsequent frustrating display meant it wasn’t surprising to see him hooked at the break for a more effective Ömer Bayram, but Ryan Donk didn’t emerge as an upgrade on Andone – who was starved of service throughout.

Creative midfielder Younes Belhanda and winger Emre Mor remained unused substitutes here, when an ineffective Babel couldn’t create a chance and slid into Carvajal’s pocket over the 90 minutes. The only counterargument is that it was too late for marked improvement but even still, this performance was certainly a forgettable one. Real could’ve had double-digits if they wanted.

#2 50 up for Benzema, whose tireless display earns memorable brace

Cristiano Ronaldo, Lionel Messi and Raúl González are the only players with more goals than Karim Benzema in Champions League history. His memorable brace on this occasion takes him to 62 all-time and 50 for Real, who haven’t always warmed to the experienced Frenchman when he battled Ronaldo for more attacking responsibility.

Since the Portuguese’s departure, Karim has stepped up to the plate and although he doesn’t always score, the forward continues to deliver tireless displays which justify why he has such longevity at one of the world’s best and biggest clubs.

He turns 32 next month and just as Barcelona’s Luis Suarez can attest, will start to physically decline at some stage. Nonetheless, his all-round contributions cannot be ignored for a Real side in transition under Zidane, who will have enjoyed what he saw from his leading frontman here.

Battling away against Marcao and particularly, Christian Luyindama at the heart of Galatasaray’s backline, he didn’t always come out unscathed in one-on-one duels but importantly picked his moments like the predatory striker he is. On another night, he’d have scored a hat-trick.

With 88% pass success (45 completed), he won three duels while continuing to prove himself as a reliable passing outlet (67 touches) given the visitors were caught in two minds whether to mark him or attach more attention on Real’s wingers.

His two goals were both straightforward close-range efforts, teed up by Rodrygo and Carvajal – though he had to get into those dangerous positions to begin with and has an uncanny ability to find himself unmarked in those situations. Then he turned creator to return the favour with a neat through pass for Rodrygo in stoppage-time. A well-taken brace and assist taking him up to nine goals and five assists for the campaign (all comps), Karim has begun this season in excellent form.

Star in the making: Rodrygo netted a hat-trick on just his second Champions League outing

Rodrygo made Champions League history on an unforgettable night for him and his development going forward. Not only did he score a hat-trick on just his second appearance in the competition, but he becomes the youngest Real Madrid player since Raúl in 1995 to score for the club – and scored the quickest Champions League brace of all-time two minutes later.

Since completing a £40m move from Santos this summer, he has made fleeting appearances for Real’s senior and secondary sides but after this display, it’s unlikely we’ll see him return to the Castilla team again. With two La Liga goals in limited minutes, it was always going to be interesting to see how he’d fare in continental competition.

Despite a solid but unspectacular showing on MD3, the 18-year-old Brazilian has firmly exploded onto the scene after his performance here: catching Galatasaray off-guard from minute one, full of purpose and proving an ever-present threat too.

The visitors were slipping and sliding all over the place as they simply couldn’t live with him, on an evening where he grew in confidence and made the demanding Bernabeu supporters purr with excitement over his world-class potential.

While his headed finish was impressive, he produced something even more special to break the deadlock. Marcelo’s pass fell to his path but there was still work to do: excellent chest touch control, leaving Lemina sliding across the turf in his wake before shifting onto his left foot and unleashing a low drive which flew into the bottom corner.

His drilled assist into Benzema before the break proved pivotal, as Karim returned the favour in second-half stoppage-time to watch on as the Brazilian coolly slotted beyond Muslera to cap a fantastic evening after a razor-sharp display infront of goal.

Ultimately, he’ll continue to improve and mature as part of a transitional Real side where he’s expected to feature as a cornerstone of their attacking riches for years to come. Still only 18, it’ll be up to himself, Martin Ødegaard, Vinicius Jr, Luka Jovic and more to lead Los Blancos back to their dominant glory days. No pressure then.