Adam Murray will look to earn his first victory as Barnsley caretaker manager at the fifth time of asking this weekend, when they host fellow strugglers Stoke in an early relegation six-pointer at Oakwell.

Ahead of another international break, both teams endured dismal starts to 2019-20 and while Stoke’s managerial situation appears to be resolved with Michael O’Neill poised to take over, Barnsley’s situation isn’t yet clear.

Despite winning promotion to the second-tier last term, Daniel Stendel was sacked on October 8 after a ten-match winless run. Many supporters questioned the club’s recruitment policy rather than their head coach for the difficult circumstances they found themselves in – which hasn’t improved since his departure.

Stoke’s successive wins last month proved temporary respite for Nathan Jones, though Barnsley’s only victory was their season-opener against Fulham. Bristol City (7) are the only team league-wide with more draws than their six already this term, while they are a point ahead of the Potters in 23rd despite conceding two more.

Did Barnsley act too quickly?

The Tykes have been very thorough in their search for a suitable replacement, though fears continue to intensify about whether sacking Stendel two months into the campaign has proven a short-sighted decision in hindsight.

Whatever happens, Murray is content that he’s achieved his target since taking over on a temporary basis last month.

“My focus has not changed from Stoke. It is a big game for us, we go into the international break and I imagine we come out with a little bit more clarity on the situation.

My target was to settle the group; I think we have done that and are in a good place. As far as I am concerned, I have achieved the remit I was challenged with. The club will do whatever they think is best and either way, I will be happy with their decision.”

A win in South Yorkshire for either side could prove something to build from after the break, though Barnsley will quietly be confident of securing all three points.

Murray revealed he’s got a fully-fit squad “raring to go” this weekend, barring young fullback Jordan Williams who just began rehab on his road to recovery.

As for Stoke, newly-appointed boss Michael O’Neill will take charge for the first time this weekend after his arrival was made official this afternoon. 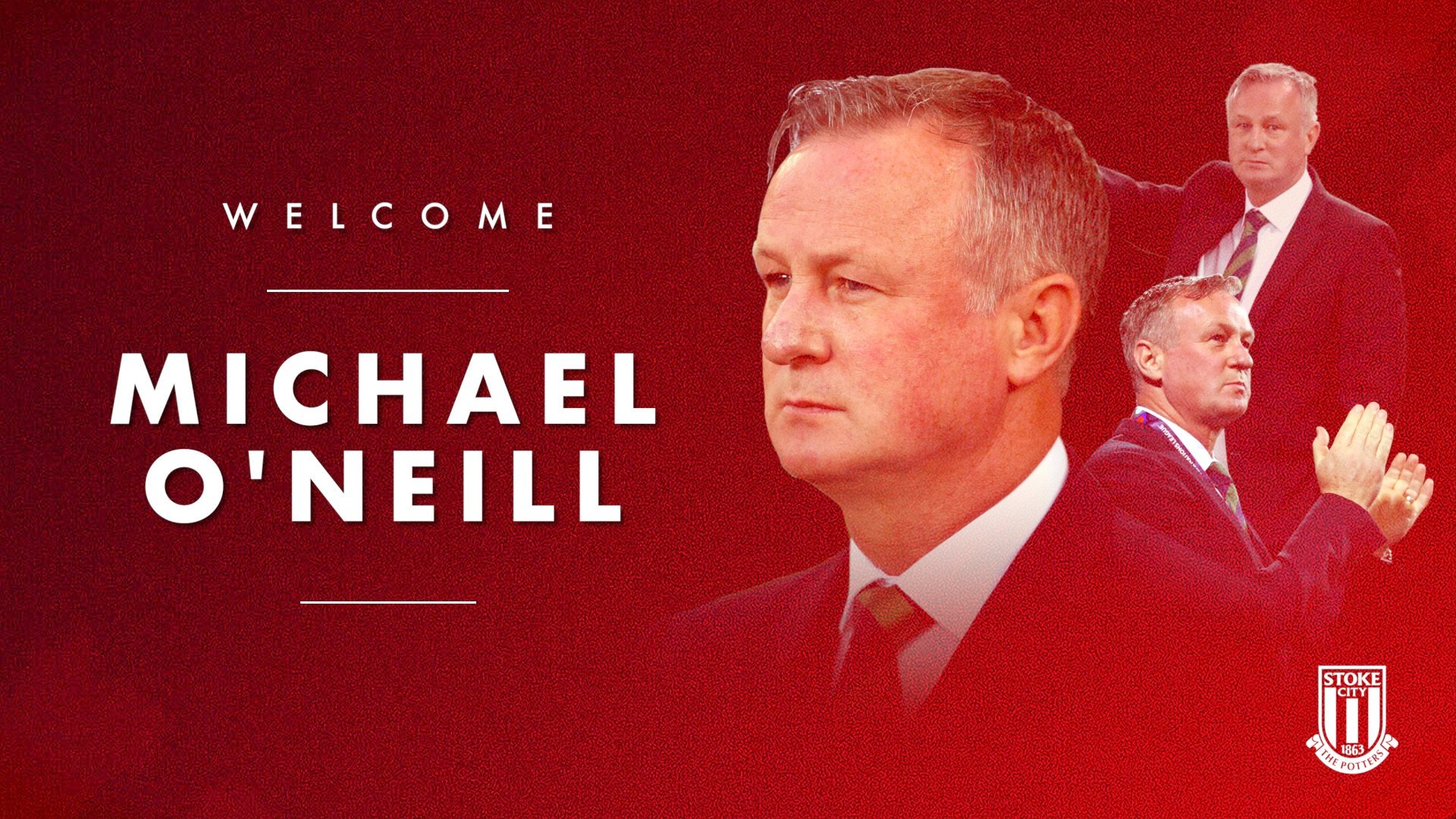 Stoke tweeted this image alongside the confirmation message earlier this afternoon

Having signed a three-and-a-half-year contract with the Potters, he’ll also continue managing Northern Ireland as their Euro 2020 qualification bid intensifies with their final two group games remaining next week.

He oversaw his first training session this morning, but first-team coach Rory Delap spoke to the media on Thursday before Michael’s arrival was made official.

Having watched their 2-0 defeat by West Brom on Monday night from the dugout, Delap stressed he’s under no illusions about their current situation.

“They certainly do [know they’re in a relegation battle], we spelt it out after the West Brom game. It’s been spoken about before and what it takes to come through it. Players signed with the aim of staying in the Premier League or challenging to go back, I said after the game we need a mentality change.

To go from PL to a Championship relegation battle is a massive change. We sat down with them on Tuesday, put a slide together about how tough it’ll be to stay up this season. We need 14 wins or the equivalent to survive.”

It’ll be interesting to see what changes O’Neill makes to that starting eleven this weekend, following another disappointing home display which saw them lose their 11th league game already this season.

They registered three attempts on target in 90 minutes, were starved of possession (39%) and struggled to recover after conceding early through Matt Phillips’ close-range strike just eight minutes in. The 24-year-old Englishman is enjoying his best start to a season in his career thus far, having netted six goals in 12 league games this term. His stoppage-time equaliser saved Barnsley’s blushes last weekend at Bristol City’s expense.

He’s settled quickly since an initial loan from Fulham was made permanent at the start of 2019, helping fire Barnsley out of League One and back into the Championship – where he previously hasn’t always been consistent. He’ll be itching to face a porous Stoke side in his first meeting against the Potters as a professional.

Clucas has been one of few consistent performers in an underwhelming Stoke side this term, though disappointed during their most recent defeats to Millwall and West Bromwich Albion.

He netted his third goal of the campaign during their 2-1 win over promotion hopefuls Swansea last month and the 29-year-old must take more responsibility as part of a midfield that have flattered to deceive far too often this season.

Barnsley have conceded at least twice in six of their last seven matches, while Stoke have played 280 Championship minutes without a league goal.

Stoke haven’t won a league match they started as an away favourite in since the start of last season (D6, L3)

The Tykes are the most booked Championship side this season (38 yellows, an average of 2.5 per game) while Stoke are the joint-least in the league (18 yellows, 1.2 per match).

Their most recent meeting was back in December 2007, where a six-goal thriller saw both sides share the spoils.

Stoke have lost three successive games for the second time already this term, while Barnsley’s winless run spans back to August 3. Something has to give…