He cited the 50-year-old’s organisational skills and ability to unlock player potential as big reasons why he’d prove a perfect fit when returning to club management. O’Neill spent eight years at the helm for Northern Ireland, who he took to their first major tournament in 30 years.

There has been an air of inevitability about his managerial future for a few years now, with many suggesting a Premier League job was soon on the cards – while Scotland attempted to double his wages to succeed Gordon Strachan in 2018.

But inheriting this current Stoke crop at such a pivotal juncture in the campaign, especially given their dismal form, will not be easy. Taggart told Radio Stoke that while speculation has continued to rumble about his future for a few years now, these latest news developments don’t come as a surprise:

He’s done a fantastic job [with NI] and in my opinion, he could easily manage in the Premier League. I’m not surprised at all that a club like Stoke would be interested in his services.”

While Jones was criticised for his preference to utilise the diamond formation and tactical variations forcing players into unfamiliar positions, Taggart made sure to stress the managerial strengths O’Neill possesses.

“When you watch his teams play, they are very well organised without the ball, which in today’s game is massively important. He plays to a certain structure but within that, players will have freedom of expression when you have the ball.

Most importantly, he’s dragged every last ounce out of all those players to get them in contention for Euro 2020 qualification. It’s going to be very difficult but all the players are singing from the same hymn sheet, buying into what he wants to do: very important for any dressing room.” 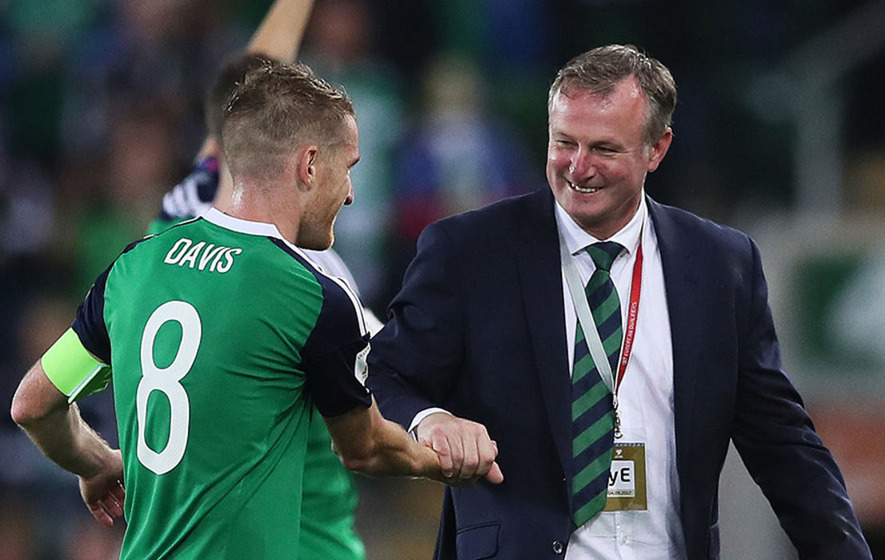 During the upcoming international break, The Green and White Army face important fixtures against the Netherlands and Germany – both sides are level on 15 points in Group C, while they trail behind with 12 after six group games.

If unsuccessful during a crucial week for their Euro 2020 chances, being drawn into a play-off path stage next March via Nations League seeding awaits them.

This is important to note because although a four-year contract and six-figure compensation package have reportedly been tabled, Michael is expected to take charge of next week’s matches regardless. Nonetheless, Taggart isn’t doubting his ability to handle egos and a different dynamic when returning to a day-to-day role.

“First and foremost what you have to do as a manager is understand the psyche of any particular football club. Michael has to understand what the fans, board expect while portraying that to players in a way they buy into.

He’s a manager who’s made his name in international football and as for the players on the international scene they all speak very highly of him, none more so than Leicester’s Jonny Evans. I don’t think that’ll be an issue.”

While citing the upcoming January transfer window as increasingly important after Jones’ departure, O’Neill is expected to receive financial assurances – both personal and for Stoke – ahead of an important month with plenty of movement.

“I think written into Michael’s contract there might well be something where a club comes in at a certain level then he is given permission to speak to them. That’s more than likely written into his contract and if he covered all his bases correctly, he’d have seen this kind of attraction.

There are a lot of problem at Stoke, a lot of unrest. Speaking when I was there in pre-season, speaking to some of the people involved at the club it’s not a happy place at the minute. There will be a lot of comings and goings, to-ings and fro-ings, it will take time.”

Stoke travel to face fellow strugglers Barnsley in an early relegation six-pointer on Oakwell this Saturday lunchtime so stay tuned for more coverage.