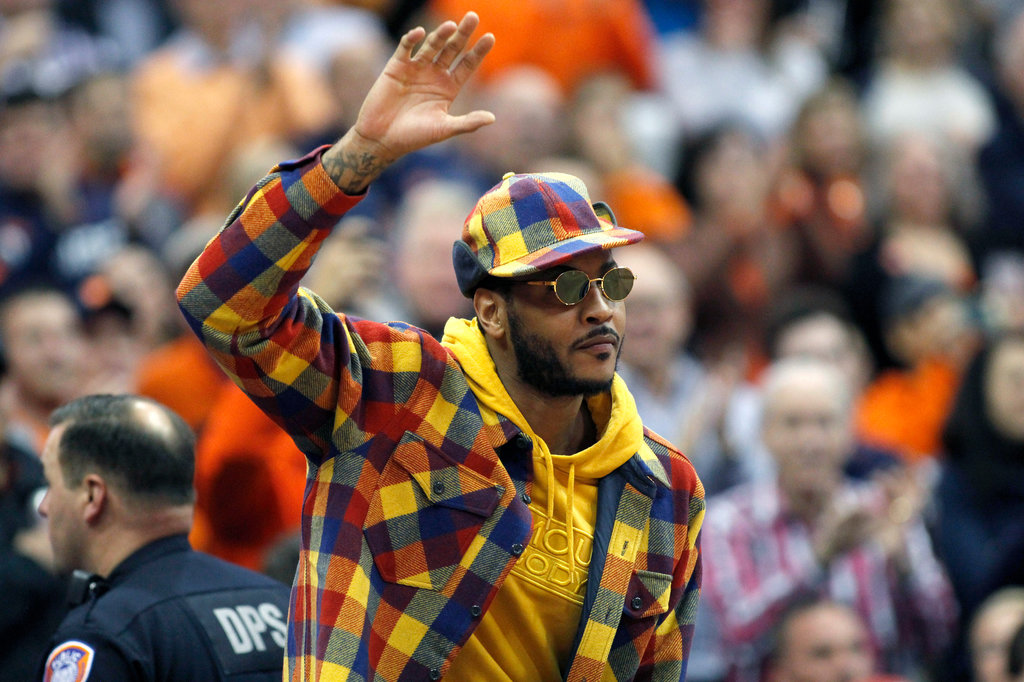 It’s official: veteran free agent forward Carmelo Anthony’s initial non-guaranteed deal to join the Portland Trail Blazers has been completed today after he passed physical exams and finalised necessary paperwork. He has been ‘activated’ and could feature during tonight’s game against the New Orleans Pelicans.

Anthony, 35, has been without an NBA team since an abrupt ending to his short tenure with the Houston Rockets during the 2018-19 season – he lasted just ten games before being ruthlessly dismissed last November.

Reports from ESPN’s Bobby Marks claim his base salary is $2.159m on a deal that will become fully guaranteed if he’s not waived by 5pm on January 7, 2020. He will wear No. 00 and their president Neil Olshey had this to say about the 10-time All-Star’s arrival:

“Carmelo is an established star in this league that will provide a respected presence in our locker room and a skillset at a position of need on the floor.

Melo can be another guy who is a threat, can change the geometry on-court and get to the free throw line late in a game. He has the poise to handle himself in those late game situations we’ve struggled in.”

So, what are the Blazers getting?

Anthony has averaged 24 points, 6.5 rebounds, three assists and one steal per game across his 16-season career to date – with the Denver Nuggets and New York Knicks enjoying Melo during his prime years.

However, the NBA has evolved into a three-point centric game and that hasn’t been kind to the 35-year-old’s playing style. His speciality has always been the mid-range game while he’s often exposed as a defensive weakness by opposition teams.

Over the summer, he was keen for clear-the-air talks with the media and felt compelled to talk in response to criticism and questions galore over an uncertain future.

It’s something that came to the fore during his one-year stint in Oklahoma and despite an initial refusal to come off the bench, Houston should have known better than to single him out as the scapegoat for their early shortcomings last season.

Damian Lillard’s enjoying an excellent start to 19-20, averaging 28.6 points, 4.9 rebounds and 7.1 assists in 14 games thus far but his success isn’t shared across the roster. The Blazers have struggled with injuries and poor defence this term, a key reason behind their 5-9 record in the increasingly-competitive Western Conference.

CJ McCollum is their second leading scorer averaging 21.3 ppg, while questions over Hassan Whiteside’s suitability continue to intensify whenever they play against good opposition.

Zach Collins’ absence through a serious shoulder injury means power forward was the position where the Blazers needed reinforcements, so it’ll be interesting to see whether he can settle quickly and prove a better fit than his previous two destinations. To finish his career on his own terms while justifying his desire to return, it’s important he does.

The Blazers are currently on a six-game, 10-day road trip which began with their 121-116 win over the Spurs on Saturday evening.

They have won two of their last eight games but face an unpredictable Pelicans side who also have inconsistency issues of their own. Top draft pick Zion Williamson continues his recovery after knee surgery (expected back next month), while Alvin Gentry has a number of niggling injuries to contend with – including Lonzo Ball.

Nonetheless, they were surprise winners against the Clippers in Paul George’s debut game last week so it’ll be interesting to see if history repeats itself against another multiple All-Star on their NBA return…