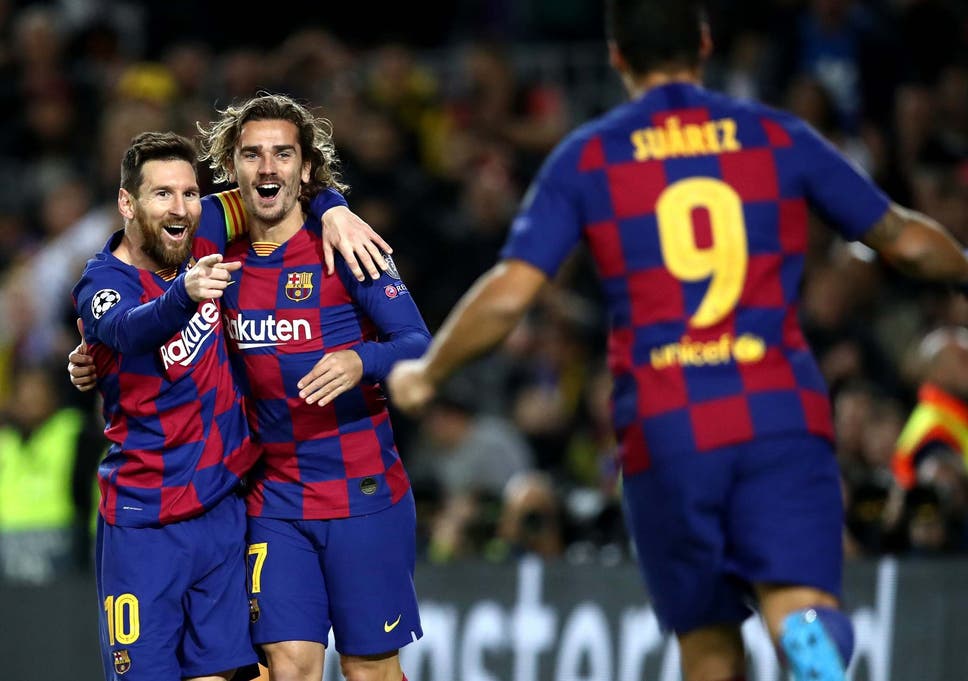 Barcelona booked their place in this season’s Champions League knockout stages following a 3-1 home win over Bundesliga giants Borussia Dortmund. Goals from Luis Suarez, Lionel Messi and Antoine Griezmann was enough for Barca to prevail against an underwhelming BVB display – Jadon Sancho came off the bench to score a well-taken consolation strike late on.

It was another Lionel Messi masterclass as the masterful Argentine inspired Barca to an important victory in their Group F clash against Dortmund on Wednesday night. He combined well with attacking teammates to create two assists, while netting his second UCL goal in 19-20 too – having previously struggled with persistent injuries this term.

It was his perfectly-weighted pass which teed up Suarez through on-goal just before the half-hour mark, minutes after Griezmann replaced compatriot Ousmane Dembele who limped off with a thigh injury on a forgettable evening for the former Dortmund winger.

Suarez returned the favour three minutes later after Frenkie de Jong was alert to capitalise on Mats Hummels’ mistake in possession. Five seconds later, Messi wheeled away to celebrate after a give-and-go with the Uruguayan saw him evade the BVB backline before slamming into the bottom corner.

Before going two goals behind, fullback Nico Schulz came close on two separate occasions as Dortmund threatened in stages. However, manager Lucien Favre opted to replace the 26-year-old with Jadon Sancho as the second-half got underway, searching for more creative impetus as they looked to reduce the deficit.

Julian Brandt forced an important stop from point-blank range by compatriot Marc-Andre ter Stegen, as Dortmund – powered by Sancho’s introduction – were starting to get more involved with intricate build-up around the final third.

Nonetheless, Barca were ruthless in transition and made them pay for another costly error in possession. Messi turned creator once more, this time setting up Griezmann with a first-time finish through on-goal.

Without warning, Sancho reduced arrears with a brilliant strike from range before forcing ter Stegen into a fantastic save ten minutes later – tipping the English teenager’s effort onto the crossbar as Jadon did his utmost to drag Dortmund back into the contest.

It proved futile as Barca and ter Stegen held firm, booking their place in the last-16 with a game to spare. Without further ado, here’s a look at five talking points from Barcelona’s third successive victory in all competitions:

#5 Under-fire: Is Lucien Favre’s Dortmund stint coming to an end? 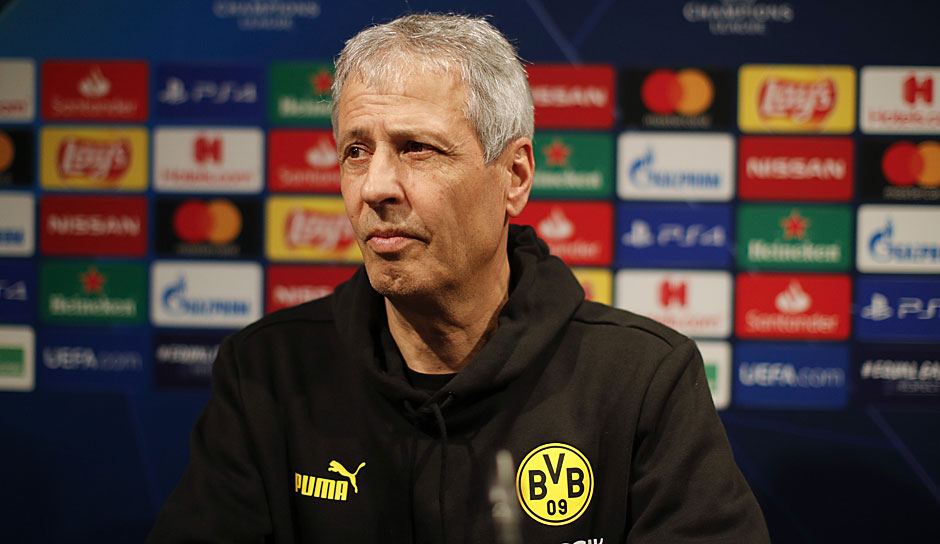 Favre is under increasing scrutiny after his pre-match gambles failed to pay off, once again

Lucien Favre’s decision to drop Jadon Sancho to the substitutes’ bench backfired significantly, as Dortmund were ultimately at the hands of a convincing defeat.

The only reason why the scoreline wasn’t more one-sided, was through Sancho himself. Upon his introduction to start the second-half, the 19-year-old English forward linked up well with Marco Reus and Julian Brandt while emerging as one of very few players capable of turning the two-goal deficit around.

Ongoing tensions between Sancho, Favre and Dortmund have been well-documented in recent weeks – though his replacement Nico Schulz wasn’t best placed to excel so high up the pitch. A fullback by trade, he started at left wing and failed to convert two good opportunities, which proved key as Barca made them pay soon enough.

Had Jadon started, this might have been a completely different story. Dortmund are now winless in three matches across all competitions, while level on points with Serie A side Inter on seven points after five group games – meaning they’ve got work to do ahead of matchday six on December 10 if they want to progress into the knockout stages.

The 62-year-old Swiss boasts a 60% win percentage since his arrival last summer, but they’ve already lost four games (all comps) and drawn six this term. His man-management of players including Mario Gotze, Dan-Axel Zagadou and Sancho has been questionable, while frustrating displays like these don’t help ease the pressure on a man under scrutiny.

The situation is made more worrying when you look back to mid-June this year, where Dortmund extended his existing deal until the summer of 2021. Unless they can improve and quickly, Favre won’t last that long. 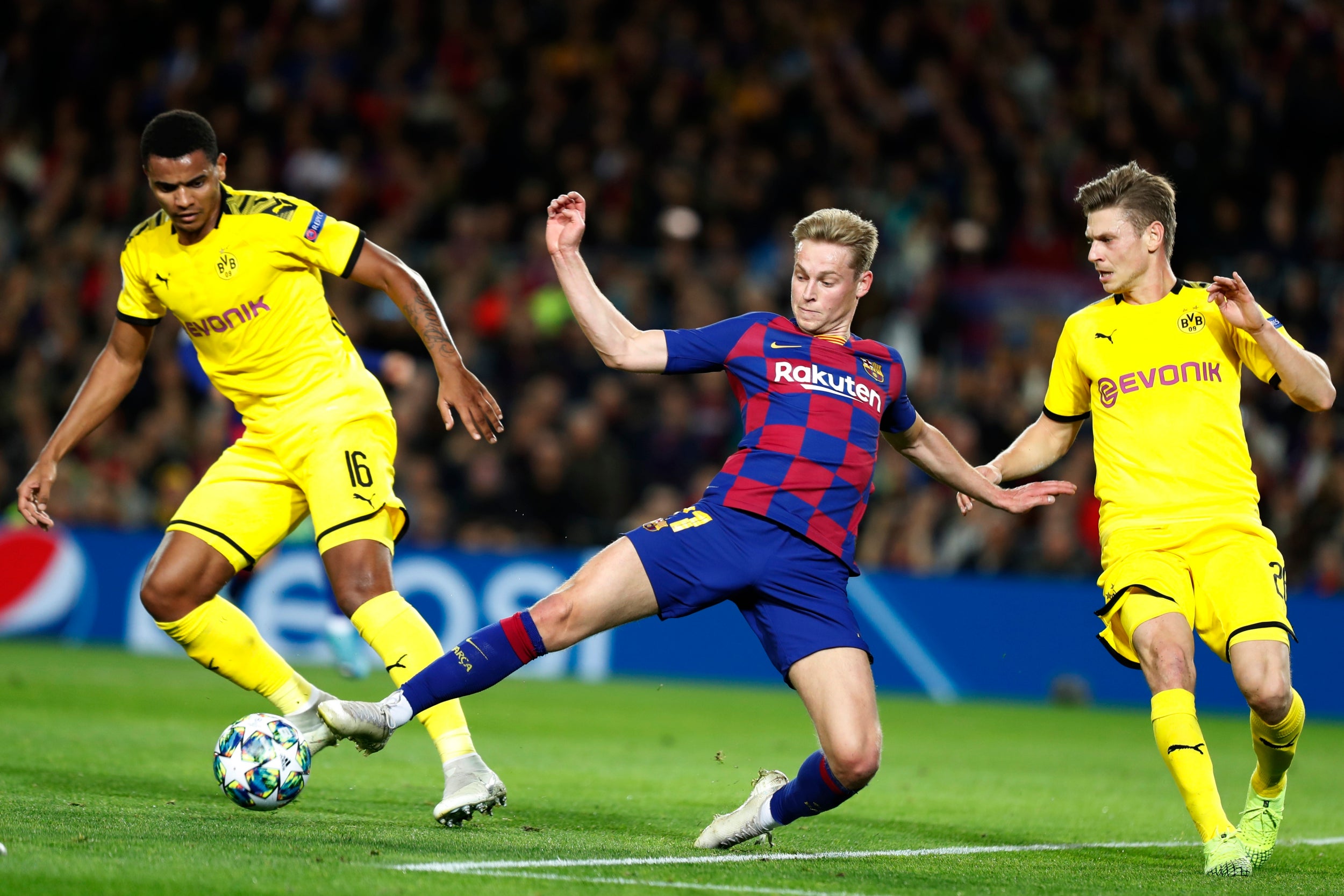 Barca are through to the knockout rounds as group winners but other than Messi, have a select few players to highlight for their respective efforts on this occasion.

The match could’ve changed completely if not for Marc-Andre ter Stegen’s alert, important goalkeeping saves throughout. The hosts did a good job of soaking up pressure and combining to devastating effect in transition, but there was more to their display than the three goals.

ter Stegen continues proving why he’s arguably the world’s best goalkeeper with match-defining interventions at crucial points: denying Schulz and Brandt from close-range, delivering an excellent fingertip save to tip Sancho’s goalbound effort onto the crossbar and again proving a dependable outlet for the Blaugrana.

He makes these saves look so routine and straightforward that it’s no longer surprising anymore – more expected of him as Barca’s last line of defence. Nonetheless, if not for his efforts over the 90 minutes, this article would be written in a completely different tune.

As for Samuel Umtiti, the World Cup winner made his first 19-20 Champions League appearance having struggled with persistent injuries in recent months. It’s fair to say since last summer’s triumph in Russia, the defender’s progression has stagnated and deciding to risk his knee hurt him in the long-term.

Nonetheless with a suspended Gerard Pique watching helplessly from the stands, the 26-year-old started for the fourth time this term and it’s easy to forget just how influential he was at the back prior to his injury woes. Partnering compatriot Clement Lenglet at the heart of Barca’s defence, he was one of the hosts’ best performers while doing his reputation no harm at all with a steady defensive showing.

He made one goalline clearance, block, interception and tackle, won four of five duels and completed 93.8% of his passes without committing a foul over the 90 minutes. It’s a display that’ll give him some much-needed confidence, given his lack of luck recently.

Speaking of best performers, Frenkie de Jong again starred as the brightest and most exciting of Barca’s midfield trio. Alongside Sergio Busquets and Ivan Rakitic, the 22-year-old was composed in possession, unafraid to take players on while releasing teammates with neat forward passes and an ever-present defensive figure too whenever Dortmund threatened. 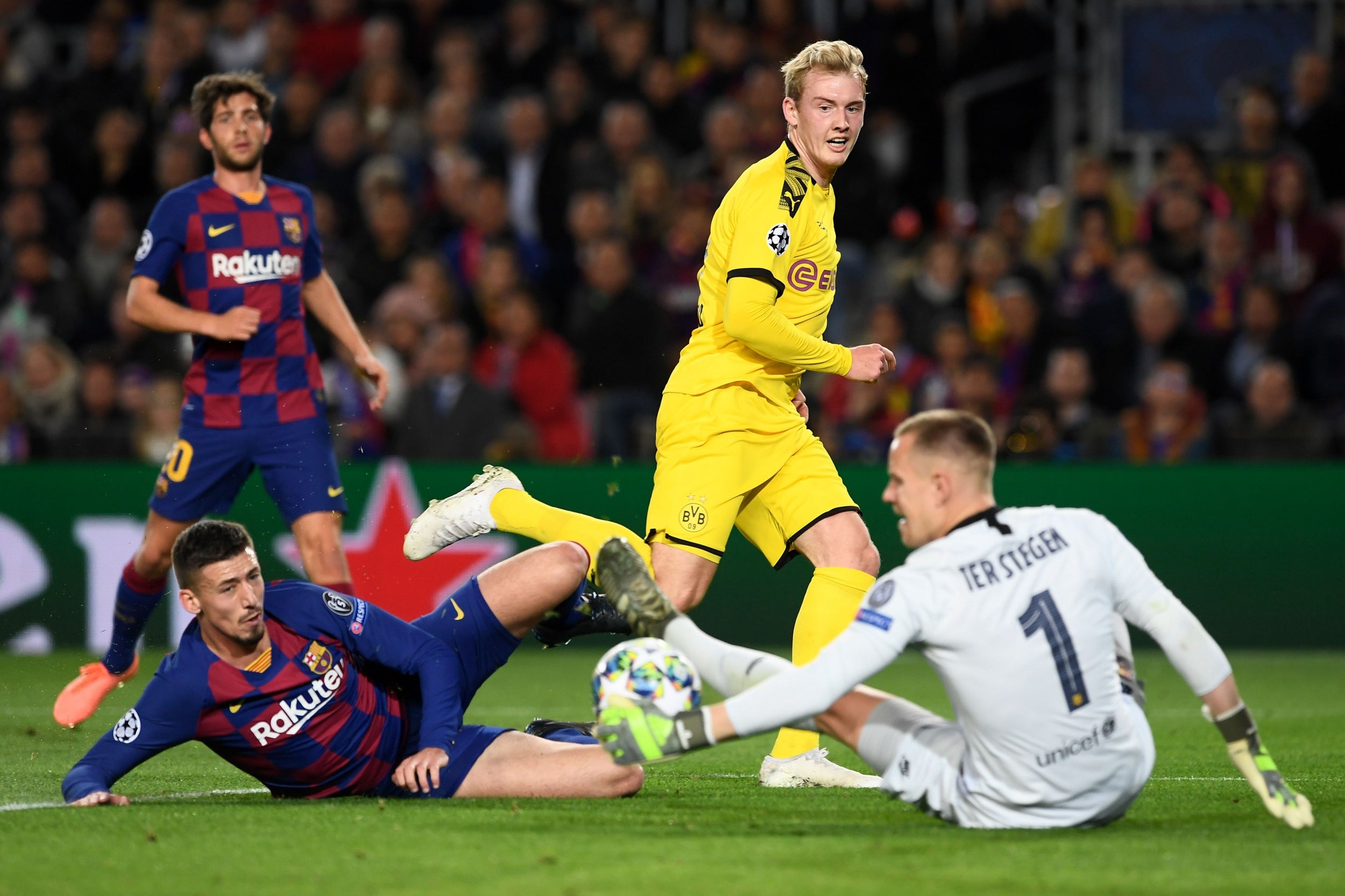 Despite improving after Sancho’s arrival, Brandt and other Dortmund attackers disappointed

Since his £20m summer move from Bayer Leverkusen, it’s fair to say Julian Brandt has been average for Dortmund this season. A step-up in quality – both as far as teammates and his expectations are concerned – that is to be expected. After all, the Germany international turned 23 in May and is most notably known for being a surprise World Cup inclusion under Joachim Low over Leroy Sane last summer.

Nonetheless after tonight’s showing, he has scored four goals and created three more in 18 appearances this term. For a player of his creative ability, that’s just not good enough.

Only Corentin Tolisso, Hakim Ziyech (both 5) and Roberto Firmino (4) have more Champions League assists than him this term, but stats can be deceiving. He’s featured in a variety of attacking positions – on both wings, in an attacking midfield role and more recently centre-forward: either by himself or alongside Marco Reus.

It seems like Favre isn’t convinced about Brandt’s best position yet, which in late November isn’t exactly a welcome sign. Despite teeing up Sancho for Dortmund’s consolation goal here, centre-forward clearly isn’t his natural nor favoured role either.

He won three of ten duels, lost possession on 14 occasions – only Achraf Hakimi (16) had more and fluffed a promising opportunity from close-range, firing into ter Stegen’s path when Julian could have placed it towards the far corner or deftly flicked it over his compatriot. Favre dropped Sancho to the bench but Jadon came on, scored and was BVB’s best player

Fast forward 13 months and the English teenager has continued to blossom for club and country, while seeing his market value skyrocket as he led the Bundesliga in assists (17) last term, helping Dortmund mount a serious title charge.

Despite suggestions the 19-year-old’s head has been turned amid interest across Europe, Jadon has netted four goals and created seven more in Germany’s top-flight already this campaign. His presence on the substitutes’ bench made headlines ahead of kick-off as Lucien Favre claimed he needed “players on the pitch who are focused and ready.”

Having watched the first-half from the bench, he was introduced to start the second and delivered another impressive display which will only continue to prove his status as Dortmund’s scapegoat when their struggles clearly lie deeper than Sancho’s situation.

European champions Liverpool, Chelsea, Manchester United and Barcelona themselves are said to be heavily interested in his services – with performances like these proving his worth as one of the world’s best youngsters who continues shining despite ongoing tension.

When questioned after the game on whether Jadon should have started, Mats Hummels told Sky Germany: “I don’t want to talk about it. He played really well in the second half, was really involved and scored a great goal – that’s the way it should be.”

He was BVB’s brightest spark and looked an ever-present threat, despite coming on in difficult circumstances with a two-goal deficit to overturn. Catching ter Stegen by surprise with a well-struck effort from distance, it flew into the top corner to give Dortmund faint hope of a comeback. If not for a fantastic stop by the German to tip his other strike onto the woodwork, we’d have been in for a grandstand finish. 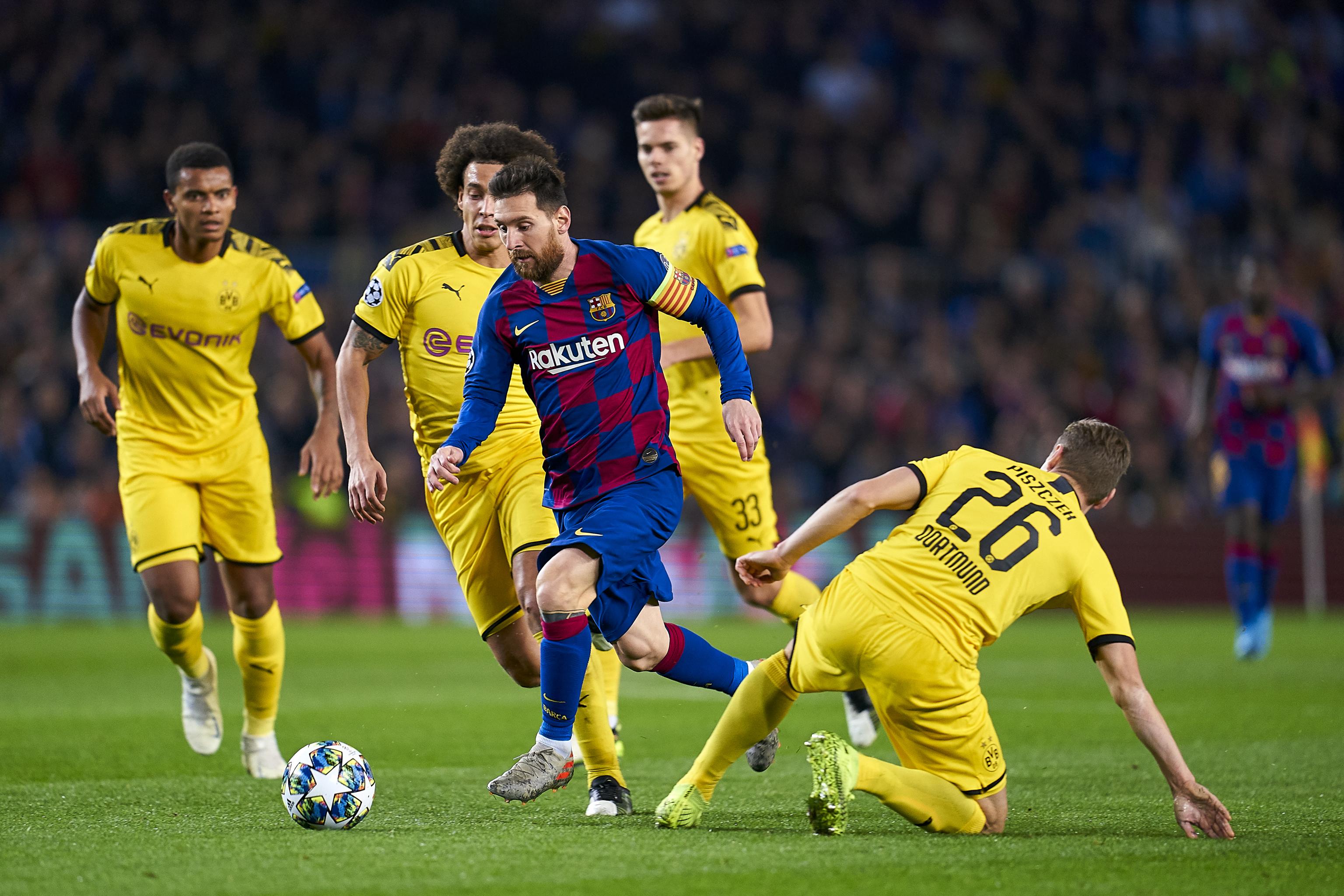 On his 700th Barcelona appearance, Lionel Messi netted his 613th goal and now has 250 assists too as the magical Argentine continues expressing individual brilliance when his team needs him most.

With ten goals and eight assists in 13 appearances this term, he’s been struggling with injuries to start 2019-20 but remains Barca’s best player and more importantly, has embraced his responsibility as a primary playmaker in the final third too.

He applied perfectly-weighted probing passes for Suarez and Griezmann to finish in transition, while unfortunate not to have had a hat-trick of assists – Suarez’s earlier goal correctly ruled out as the Uruguayan strayed offside during an eventful first-half.

Messi continues to break Champions League records too, scoring against his 34th team in the continental competition while surpassing Cristiano Ronaldo and Raul who netted against 33 apiece.

If his first assist was slightly fortunate given Manuel Akanji’s sliding interception deflecting into his path, Lionel showed great spatial awareness to tee up an unmarked Griezmann for a first-time strike with their third and final finish of the evening.

Presumably after seeing Paulo Dybala’s ridiculous finish on Tuesday, Messi was inches away from completing his brace but was denied by the woodwork with a long-range freekick in an similarly silly position to his compatriot.

He danced his way beyond opposition challenges with effortless ease at times, a stark contrast to that performance at the Signal Iduna Park on matchday three where he came off the bench and looked short of match sharpness.

Being booked for simulation early in the second-half was the only blemish on an otherwise memorable showing, after Roman Bürki fell to ground and he lost his footing too – referee Clement Turpin brandished the yellow card and despite protesting innoncence, the decision had already been made.