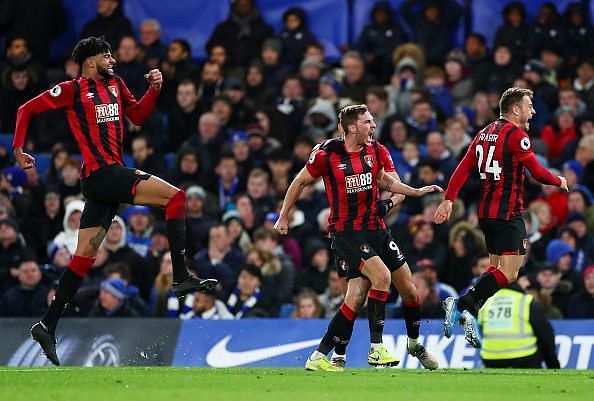 Mason Mount, Christian Pulisic, Emerson and substitute Mateo Kovacic all went close with efforts for the Blues. However, service into the club’s leading goalscorer Tammy Abraham was poor, as you could sense fans’ increased tension with the scores still finely poised.

Bournemouth were ultimately the better side, creating promising opportunities of their own. If not for some last-ditch defending and skewed decision-making, the scoreline could have been completely different. It was an admirable showing, one they’ll hope to build from.

The result snaps a five-game losing streak for the visitors, their first victory since beating Manchester United on November 2. Chelsea remain in the top four but crucially lose grip on their Champions League place with a handful of teams below them still to play this weekend. Without further ado, here’s a look at five talking points from a surprise result in west London:

#5 VAR does its job – proving precisely why officials need help 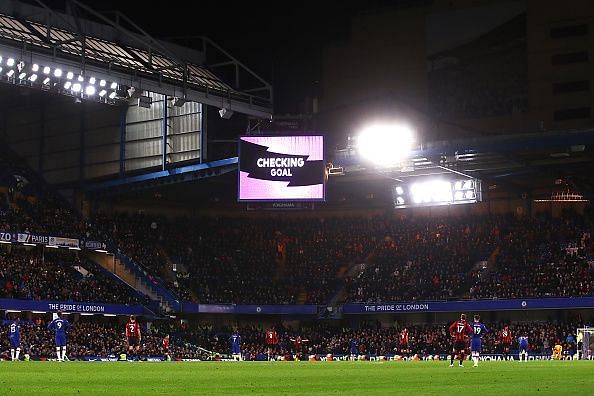 Chelsea partially cleared their lines from a corner, but after Jefferson Lerma’s power header back goalwards, Gosling showed great improvisation and awareness to deftly flick an effort over Kepa Arrizabalaga and score, despite Cesar Azpilicueta’s goalline clearance attempt.

Gosling’s strike had initially been ruled out as offside so after an anxious wait, VAR ensured the correct decision was made. Camera replays showed his midfield teammate Philip Billing was indeed offside when Lerma headed back into a dangerous area – but he ran back onside and didn’t directly impact the phase of play from said position. Mason Mount played Gosling onside, so the decision was overturned and Bournemouth wheeled away to celebrate.

The technology has been heavily criticised for a number of reasons since being introduced in the Premier League at the start of this campaign. However, instances like these justify why it’s so important to have as football progresses with the times while removing human error from a game where fine margins are often the difference between winning and losing.

You could see why the linesman on the far side flagged for offside, but Billing didn’t interfere with play and those same margins were tight between Gosling and Mount too. Critics are quick to highlight VAR’s shortcomings on a weekly basis, so it’s only fair the technology gets the credit it deserves. 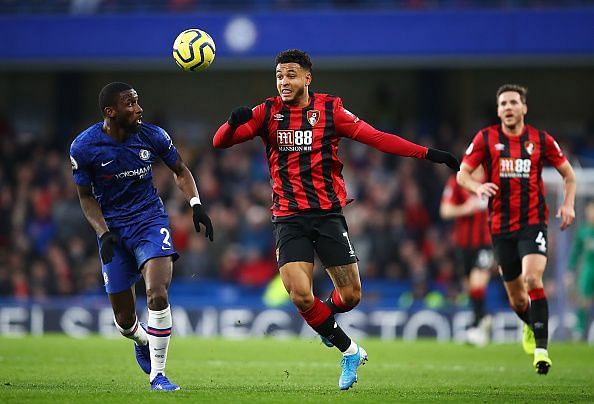 Unapologetically relentless in his pursuit of chance creation against a shaky Chelsea backline, Joshua King delivered another display justifying his standing as Bournemouth’s X factor player.

With David Brooks (ankle), Callum Wilson (hamstring) and Harry Wilson (dead leg) all sidelined, the 27-year-old Norway international has been tasked with further responsibility in the final third this term: proving there’s more to his repetoire than a goalscoring ability that has fluctuated across four-and-a-half seasons in England’s top-flight.

After an injury of his own, this was his first appearance since early November. An ever-present nuisance for Chelsea to defend, his pressing forced them into a few uncomfortable situations in the first-half and he didn’t shy away from making his presence felt out-of-possession as the hosts started slowly. However after the interval, he took things up a notch.

Kurt Zouma made two brilliant last-ditch interventions to deny King, who used his pace and spatial awareness to advance through on-goal unchallenged. Having been berated for not squaring into Lewis Cook’s path previously, King was unselfish after doing well to create another chance – this time teeing up Gosling inside the box.

It couldn’t have been more than a few inches, but Gosling on the stretch narrowly missed the ball as Chelsea scampered clear. It seems fitting he scored the winner, but it was equally frustrating that King’s match had to be cut short through a suspected leg injury with 15 minutes to play. Bournemouth will hope it’s just a knock he can recover from, with important fixtures coming in quick succession – Burnley, Arsenal and Brighton before 2020 begins. 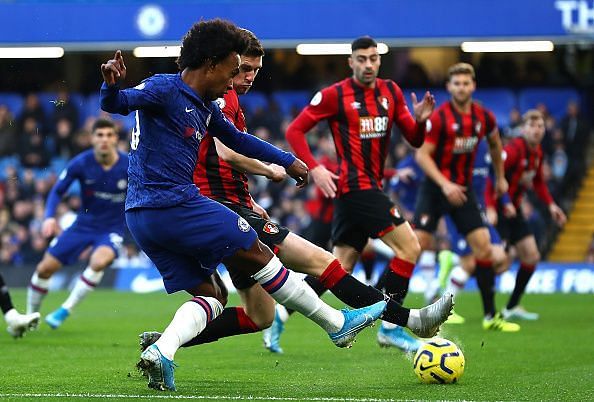 Despite some promise, Willian and the supporting cast struggled to create quality chances for Abraham

As the cameras focused on Lampard in the first-half, he was visibly getting frustrated by his side’s limited cutting edge in-and-around the final third. They hadn’t settled enough to create many goalsoring opportunities, leaving Tammy Abraham isolated with two determined centre-backs to occupy in Chris Mepham and Simon Francis.

Despite registering four shots over the 90 minutes, Tammy struggled to really get a clear sight of goal and was instead forced to feed off the proverbial leftovers. Bournemouth defended well, but their job was made easier by the hosts’ inability to get him involved in their build-up play, where he in turn combines with others to create space and supporting options.

We’ve seen the way he links up well alongside Mason Mount and Willian on a number of occasions this term, but that wasn’t the case here. Across the pitch only Joshua King (28) had less than his 29 touches throughout – and he limped off with 15 minutes still to play.

The service into him was both rushed and disappointing, leaving him to snatch at half-chances. That he completed just four passes (30.8% pass success) also speaks volumes.

The moment emphasising his influence most was after Callum Hudson-Odoi’s introduction. His hopeful cross found Tammy, who improvised well under pressure from two players and flicked the ball goalwards. Seconds later, Bournemouth fans heralded Aaron Ramsdale as England’s no.1 goalkeeper after his excellent stop to deny Emerson. He should’ve scored. 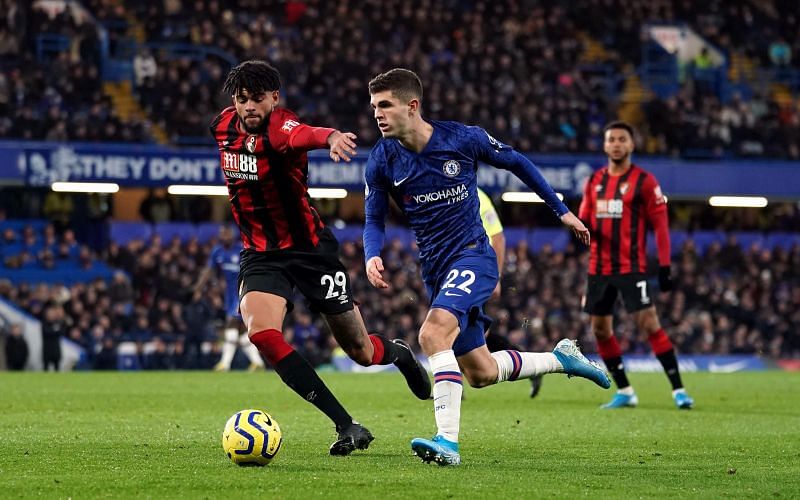 Eddie Howe’s tactics were spot on and after five successive defeats, it’s easy to forget how Bournemouth are a tough team who can beat any team across the league when on song.

They were at Stamford Bridge and since their 2015 promotion, no team has beaten Chelsea more often away from home (3) than them. So evidently, something has stuck with them – despite managerial and personnel changes galore since the first 1-0 victory, four years ago.

Howe has alternated between a 4-4-2 and a 4-3-3 in recent weeks but on this occasion, opted for an unorthodox 4-5-1 type formation. A midfield trio of Gosling, Lerma and Billing being supported by Ryan Fraser and Lewis Cook either side, King led the line by himself for the first time this term.

Injuries to key personnel means changes were always going to be expected, but Chelsea players found themselves stifled by the aforementioned midfield trident: who all did their jobs brilliantly, despite largely struggling to retain possession. It was unrealistic to expect much more from them, given the opposition quality they were up against – but they kept Pulisic and Mount quiet, frustrated Kante while forcing Jorginho into much deeper playmaking positions.

This all combined to ensure their leading goalscorer Abraham was starved of good service, while regularly forcing Willian into mistakes in possession. Despite having 40 touches, the Brazilian lost possession a whopping 18 times before being replaced.

Cook struggled for much efficiency down the right-hand side against Jorginho, but Fraser shook off an early knock to work tirelessly out-of-possession while providing King with some much-needed creative help in transition.

Dominic Solanke delivered an encouraging cameo against his former side in King’s absence and they defended well, winning aerial duels and working hard for one another: this was a disciplined showing by the visitors – who were ultimately deserved winners and could’ve easily had two or three more goals. 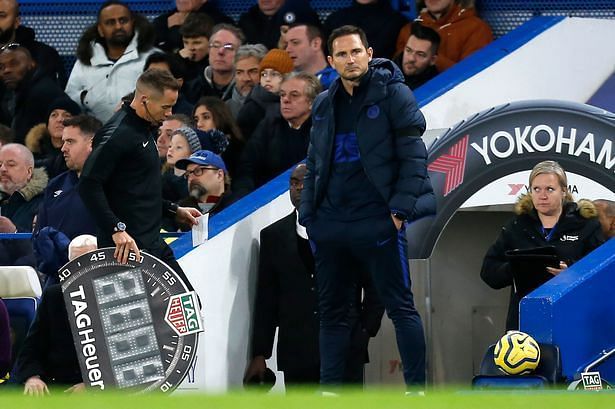 Four defeats in their last five Premier League games and suddenly Frank Lampard’s honeymoon period as Chelsea boss is firmly over. The Blues battled hard to secure their last-16 Champions League berth in midweek, but they have largely lacked consistency in recent weeks and this result emphasises the problems at hand.

You could see the discontent etched across Frank’s face as he watched his side struggle to truly break down a Bournemouth backline that have conceded eleven goals in their last five games but his job doesn’t get any easier from this point forward.

Having received plaudits aplenty for the way he has integrated fearless youngsters into his first-team plans, it’s natural to expect a performance dip from them as their hectic schedule takes a physical toll and reduces productivity. Despite his ability, Mount remains a divisive figure among some fans, while Pulisic continues mixing moments of brilliance with frustration.

Since beating Crystal Palace on November 9, Abraham has two goals in six starts (across all competitions) while there’s seemingly inadequate competition for the centre-forward role with Michy Batshuayi struggling to regularly feature and Olivier Giroud out of the picture. A common criticism of Lampard is that substitutions are often questionable – replacing the wrong players – whilst he often takes too long to change things when alterations are needed.

He’s got a reunion with former boss Jose Mourinho next week at Tottenham, before fixtures against Southampton and Arsenal await between now and the start of 2020. In the new year, he’ll be under intense scrutiny to sign reinforcements once January begins but importantly needs to get the right players, after their transfer ban was officially lifted last week.

Wilfried Zaha and Jadon Sancho have been heavily linked, while questions over their defensive situation remain. Do they need another left-back or central defender more? Who can they get, that will improve them exponentially next month? Those questions and more need answering, at a crucial stage for Lampard and his staff as pressure continues to build.