Pre-fight analysts suggested this would be a wrestling frenzy but alas, we were treated to a stand-up clash between two men who couldn’t afford to lose – for completely different reasons.

Former welterweight champion Tyron Woodley hadn’t lost for five years. He seemed virtually unbeatable too, until he faced Usman on March 2 and lost by unanimous decision. So it was time for the Nigerian Nightmare to live up to his billing.

Up against the unapologetically outspoken Covington, this was a special type of test – as evidenced by their heated exchanges in the months building up to this bout. In fairness to the California native, he began the fight with the type of aggressive intensity he promised prior:

Loading up with a high volume of strikes, the 31-year-old did his utmost to push his pace against Usman. Knowing both have ridiculous levels of cardio meant the champ would be undeterred by Colby’s fast start – although he still absorbed fierce punches aplenty and took damage in R1.

His response was one of defiance in R2, picking his punches more economically and utilising body shots to great effect, wearing down Covington’s relentlessness as the fight wore on.

Understandably frustrated by Usman’s success, Colby was unapologetic and far from subtle with his attempts to make Kamaru more emotionally charged.

Landing a high kick to your opponent’s groin is a surefire way to earn a point deduction and a response – fired up or otherwise – but referee Marc Goddard warned him, paused the fight to give Usman recovery time and on they went.

Usman’s power, punch efficiency too much to handle

There was more of the same in R3, as Usman’s punch power and striking ability really came to the fore. Fight commentators began questioning Covington’s gameplan, why was he not attempting to take things to the ground?

Colby adopted another underhand tactic, this time poking Usman in the eye to warrant another brief stoppage. One thing was crystal clear: there would still be bad blood lingering between the pair, regardless of the result.

At the end of R3 came a telling admission from Colby’s corner, he had sustained a suspected broken jaw after eating one too many of Usman’s unforgiving right-hand punches.

Despite a measured start, Usman delivered a striking clinic to leave Covington with a broken jaw

R4 was a real slogfest and as the momentum continued to shift back-and-forth, you could be forgiven for forgetting Colby was fighting with a broken jaw. If anything, it made him more daring as the pair continued to exchange punishing punches.

That round could’ve gone either way and it made for a tantalising fifth – the perfect finale to a memorable encounter on the UFC’s final PPV card of this decade.

After four exciting rounds, this is how the three judges scored it ringside:

With that in mind, whichever fighter won the final round would leave as the champion. In-front of 17,000 raucous fans, Usman absorbed Ccovington’s early pressure before hunting for the KO.

Ultimately, he made his punch efficiency count – visibly hurting Covington before landing two quick knockdowns and earning the TKO finish with 50 seconds left.

Statistic: Usman is now one win shy of tying George St. Pierre’s 12-win streak in the welterweight division – the largest record to date.

Covington complained about the manner of an abrupt stoppage immediately afterwards but refused to divulge his thoughts further, quickly departing the Octagon – presumably to receive medical attention at the hospital for his jaw injury and avoiding the crowd’s abuse.

UFC president Dana White said this on his behalf: “I told everybody not to let all the bullshit and stupid talk overshadow the fact this kid is tough and talented.

He fought the rest of the fight with a broken jaw… he’s a jackass but he’s durable, has a hell of a chin and beating him means something.

I don’t have a problem with him, I’d love to do him vs Woodley next but he has to go rest, take care of himself and then we’ll see what he wants to do.”

As for Usman, he had this to say about the victory:

“I’m know what I put in for this [fight]. I wanted to punish him for four-and-a-half rounds, then finish him, that’s what I did.

I knew if he [Colby] tried to wrestle, he’d burn himself out and he knew that too – this was a bonafide mano-a-mano fight, there was a lot being said, we wanted to duke it out and we did.

I’m going to take a vacation, give my daughter a nice Christmas.. whoever Dana and these guys decide I need to beat up next, I’m up for it.”

There’s multiple possibilities Usman can explore after Christmas, with a Covington rematch a dead certainty in future, with potential somewhere down-the-line – provided both keep winning.

He could also grant former champion Woodley a rematch, while the remainder of this division looks intriguing too. Jorge Masvidal would present an eagerly-anticipated challenge, having soundly beaten fan favourite Nate Diaz in his long-awaited return on November 2.

As for lightweights… UFC 246 sees Donald Cerrone face a returning Conor McGregor on Jan. 18, so plenty to look forward to across a wide range of divisions as we head into the new decade. 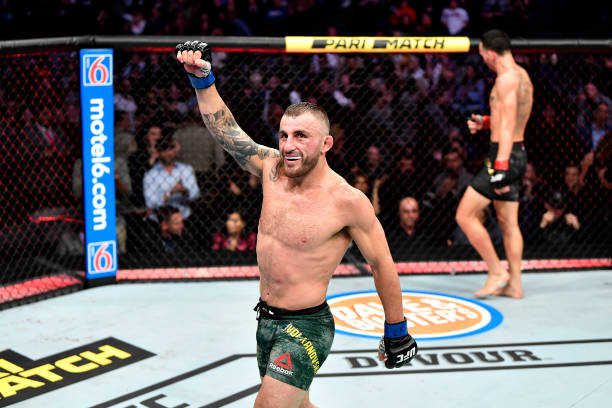 His demeanour suggested he knew. Everyone else, those quick to doubt his chances, would soon eat their words too. New featherweight champion Alexander Volkanovski did it the hard way, outpointing Max Holloway with a strategy centred on leg kicks. They worked a treat.

Almost half of the Australian’s significant strikes (75 of 93 landed, 157 total) were leg kicks as Holloway was subtly picked apart at distance – despite defending all four takedown attempts.

Volkanovski was more accurate with his output in all but one round, the fourth, marginally favouring the now-former champion, on an evening where their closely-contested battle was settled by the finest of margins. Holloway looked aggrieved but upon a rewatch, he’d accept it.

After all, it was his inability or reticence to check those persistent leg strikes which ultimately paid dividends, just like Holly Holm’s oblique kicks chopped Ronda Rousey down to size in that shock result four years ago, as just one championship belt changed hands in Las Vegas here.

Then, Amanda Nunes’ three-fight stoppage streak ended against a gritty Germaine de Randamie display but she still retained her 135lb strap for the fifth time – no easy feat in itself. Elsewhere…