UFC light-heavyweight champion Jon Jones has this weekend revealed a move up into the heavyweight division could happen sooner than expected – possibly as early as after his upcoming title defence. He faces #4 ranked Dominick Reyes on February 8 at UFC 247 and is targeting a step-up after that.

Jones, 32, has already cemented his legacy as one of the greatest MMA fighters of all-time – if not the best. With that being said, he’s prepared to move up in weight in attempts to clean out another division – having seemingly exhausted all of his credible options at light-heavy.

During a news conference on Friday, Jones (25-1, 1 NC) said it was a “very strong possibility” he does move divisions after UFC 247’s main event in Houston on February 8.

That night, he’ll face an undefeated Reyes (11-0) – who won Performance of the Night for his impressive TKO of Chris Weidman on October 18.

This is what Jones had to say: “I think it’s a very strong possibility, absolutely. There’s always gonna be someone next [at light heavyweight]. I feel as if I’ve cleared the division and I’m waiting around, taking on new challenges.

I’m not sitting on the title or hiding from anybody, I chose Dominick because he appears to be the best out of all my contenders. I’m just ready to take over the world man, really.”

Jones divided opinion during his last fight, a gritty decision victory over the durable Brazilian Thiago Santos at UFC 239 on July 6. Despite not being at his best, Jones did enough to retain his titles with true champion resolve – winning 48-47 by split decision.

Stat: UFC 239 marked the first time Jones had ever lost on an official scorecard, with one judge scoring the fight 48-47 in Santos’ favour.

After that victory, he considered moving up to face heavyweight champion Stipe Miocic – but Stipe’s win over Daniel Cormier the following month set up a rematch between the pair at some stage in early 2020.

Nonetheless, the LHW division doesn’t look particularly enticing from Jones’ perspective and a move-up in weight makes sense with the current rankings looking like this:

Those highlighted in bold, Jones has already previously beaten 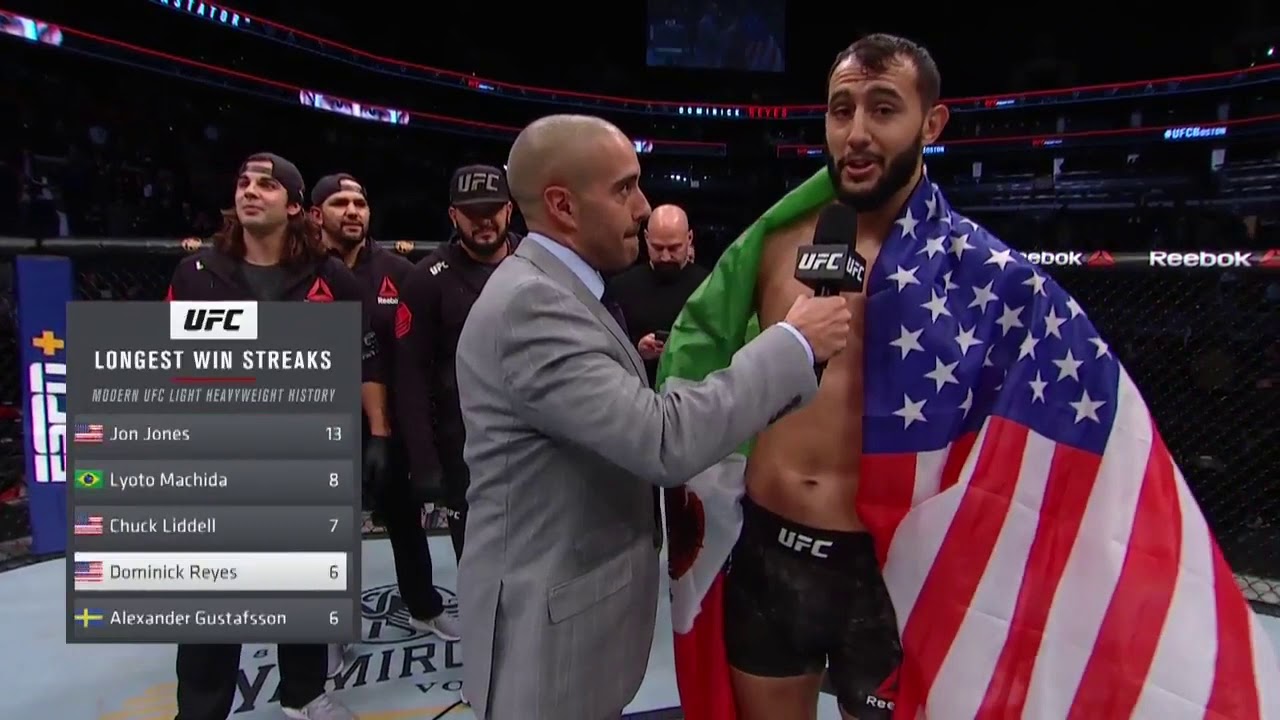 Reyes has long wanted a HW title shot and having impressed vs. Weidman, he’s up next

Jones cited his brother Arthur as an example of the fact he’s comfortable competing against guys at a higher weight, while revealing he’s trained alongside Andrei Arlovski and Alistair Overeem to good effect throughout his career thus far.

“After the Santos fight, I was at a place where I wanted to start entertaining the heavyweight division. At 240 [lbs], I move just as fast as I do at light heavyweight.

My versatility is not things most heavyweights would do – spinning things, flying knees, things like that. I feel really good and think the timing is gonna be really close. I wouldn’t be surprised if it happened [in 2020].”

As for his physical condition, Jones said he’s currently walking at 230 pounds with a six-pack and is confident he’ll make 205 while at a physical peak by early February. So, underestimating his next opponent shouldn’t be a problem then.

“I feel like I’m gonna be bigger than Dominick, more athletic, hungry, more out to prove and more on the line. This s— means so much to me, this is my life and I’m gonna get him.”