Despite making public their attempts to offload the 9-time All-Star’s bloated contract before the February trade deadline, it’s becoming increasingly clear that OKC are resigned to keeping hold of the 34-year-old for another year at least.

The Thunder received Chris Paul, two protected first-round picks (2024 and 2026, both protected Nos. 1-4) and two pick swaps (2021 and 2015) back on July 12 in exchange for their franchise player Russell Westbrook.

At the time, OKC were believed to be bracing themselves for a full rebuild with new recruit Shai-Gilgeous Alexander their proposed centrepiece. Their GM Sam Presti was said to be working with Paul’s agents at CAA Sports to redirect him to a new team, given his own title-chasing aspirations. 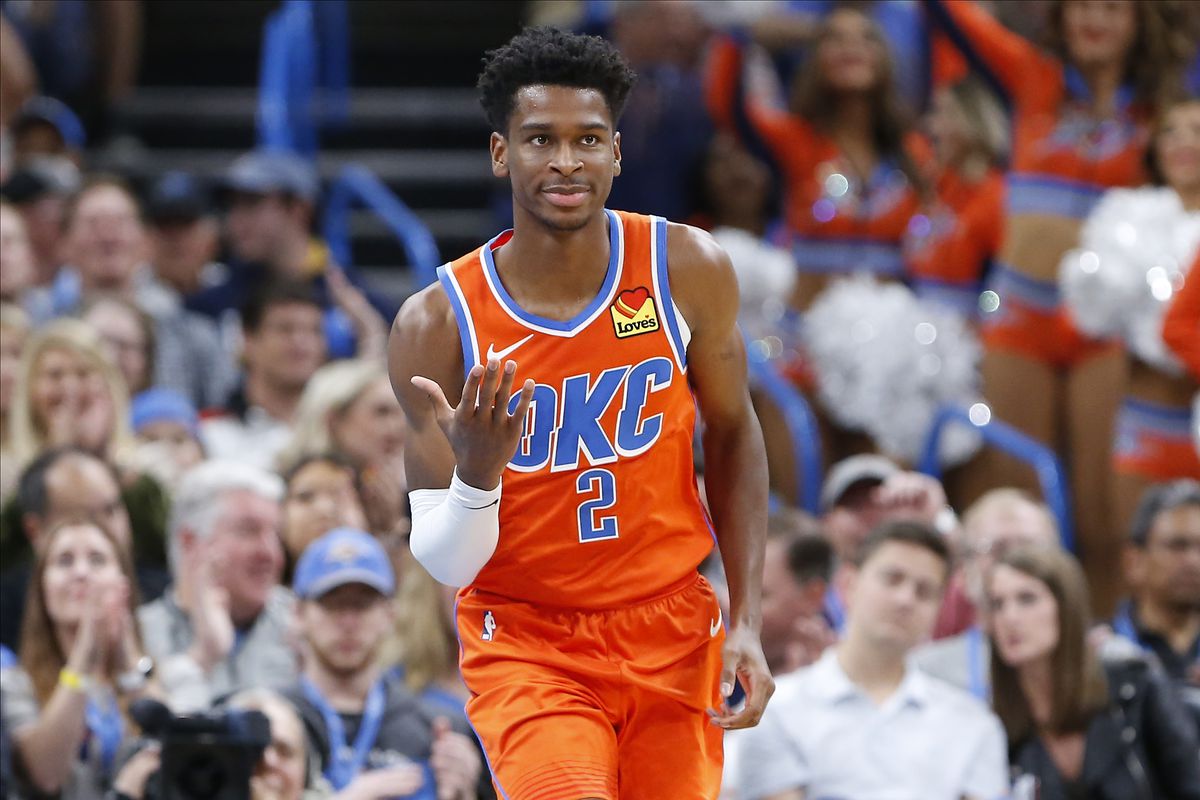 Shai has settled in quickly to life in Oklahoma, after an impressive rookie year in LA

Miami Heat in the Eastern Conference seemed an interesting proposition for both sides to complete, especially after Jimmy Butler’s decision to move to South Beach.

However, his bloated contract – which leaves him owed $85.6m for two seasons starting in 2020-21 – meant it was increasingly difficult to justify any title contender as a destination for someone who is, after all, already 34-years-old and injury-prone.

Ultimately, Paul is a reliable guard when healthy and if his financial situation was different, he’d certainly be receiving much more interest for his services. He’s averaging 16.2 points on 46.6% shooting, 6.3 assists and 4.5 rebounds in 31 minutes to date this term – the shortest time of his career – but refuses to be disappointed by his situation.

Equally an invaluable locker room presence, the big concern revolves around his lucrative deal and the types of player-plus-pick package other teams will have to offer OKC to take him on. During ESPN’s Trade Season Special this past weekend, the highly-reputable Adrian Wojnarowski said this:

“There is no belief in Oklahoma City or even the CP3 camp that there’s going to be a trade for him. After the season, another year off that giant contract? Maybe. He’s played well for them.”

It’s looking increasingly likely that the Thunder will have to stick with him for now and wait for the 2021 trade deadline or that summer to move him on.

Many fans believe that Paul’s in a difficult situation but one that both parties should wait out patiently, as it’ll have more value in the last year as an expiring deal.

Ultimately, the large majority of teams who ink lucrative contract extensions for players tend to regret them in hindsight – but OKC have plenty of other tradeable assets they can utilise to get under the cap and tank further, such as Dennis Schroder, Steven Adams and Danilo Gallinari, who they acquired in the Paul George trade this summer. The main problem for Paul is that most title contenders either don’t need a PG or don’t have enough similar level contracts to make a deal work. Detroit Pistons, Dallas Mavericks and aforementioned Heat could all manoevure assets to try completing a move – but they’re risky for different reasons.

Dallas: They have the relevant pieces but Paul’s presence takes the ball out of Luka Doncic’s hands and as their franchise player, would this help or hinder their chances of a deep postseason run?

Detroit: Armed with two All-Stars in Blake Griffin and Andre Drummond, they were swept in the first-round last season but a weaker East means anywhere from a 5-8 spot seems plausible… but would they make such a deal, that doesn’t make them much better?

Miami: They’d be cautious to ruin a good thing right now, having started 19-20 well thus far. Should he join, does their chemistry suffer and start to shift?

Only time will tell, but it seems like the writing is on the wall for this season at least.