Chelsea have bested their London rivals in two of the last three Premier League seasons but for a variety of reasons, none of the trio harbour title ambitions right now. So, which side will be crowned the Kings of London in 2020?

Southampton’s 2-0 win at Stamford Bridge means Chelsea lost successive home games for the first time since 2011 on Thursday afternoon, though Frank Lampard’s men remain top of the London sides and in the final Champions League spot ahead of matchday 20.

Tottenham‘s 2-1 win over Brighton means the gap is just three points between those two, having lost 2-0 to the Blues in their game before Christmas on December 22.

Arsenal meanwhile, are lagging five points behind sixth-placed Spurs in 11th and have a must-win home derby fixture against Chelsea this Sunday as they look to end the decade on a high.

Both them and Tottenham have undergone recent managerial changes: Jose Mourinho watched on helplessly as one of his former players delivered a tactical masterclass to reign victorious, while Mikel Arteta was announced last Friday as the Gunners’ new head coach after Unai Emery’s underwhelming stint in charge was finally ended last month.

After 19 games this season, Chelsea have 32 points and currently hold the league’s final Champions League berth – two points ahead of Wolves and a further point between them, Spurs (6th, better goal difference) and surprise package Sheffield United (7th).

Since Lampard’s final London derby appearance against Arsenal, the Gunners have only won five of 17 competitive meetings against Chelsea. He’ll be hoping that poor run continues at the Emirates in Sunday’s televised 2pm kick-off.

Spurs have won one more in eight fewer matches under Mourinho (6 in 9) and currently find themselves with 29 PL points to accompany a run of winnable fixtures between now and February 2, where they host the defending champions Manchester City.

As for Arsenal, the less said about them the better. Emery and his underachievers broke a number of unwanted records before his eventual dismissal on November 29. Their 3-1 away win vs. West Ham on December 9 snapped a nine-match winless streak and although Freddie Ljungberg tried steadying them, they didn’t improve under the Swede.

Heading into the New Year, Arteta has taken the reins – he made 150 appearances in five years for them before retiring in 2016, where he’s since flourished as a key part of Pep Guardiola’s coaching staff at City. He watched them keep their first clean sheet since October 6 during a goalless draw against Everton this past weekend, and there’s plenty of work to be done having rescued a second-half point away at Bournemouth on Thursday. 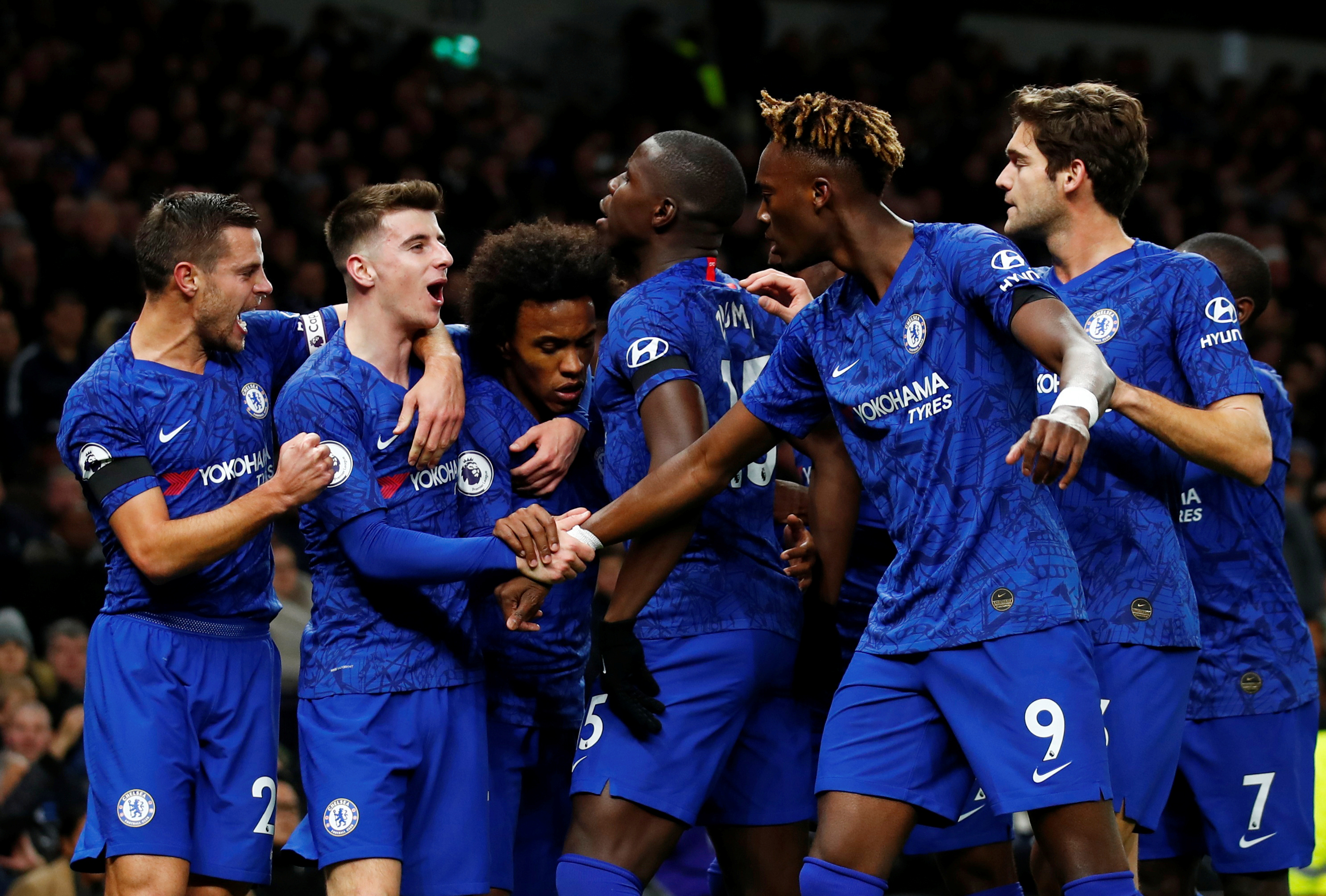 Despite a bumpy start, Frank Lampard has his young guns firing and full of confidence. Fikayo Tomori (22) has settled like a duck to water at the heart of their backline, while combination play between Mason Mount (20) and the club’s top goalscorer Tammy Abraham (22) has been a joy to watch.

Reece James (20) is seizing the opportunity to assert his own first-team credentials as Cesar Azpilicueta’s long-term replacement, while Callum Hudson-Odoi (19) and Christian Pulisic has shown flashes of their individual brilliance too.

Despite their young core, they possess title-winning experience and there’s a real sense of camaraderie within the squad too. Seasoned stars including N’Golo Kante, captain Azpi and Willian are invaluable, while their team is the most together out of the three.

Their 4-0 thrashing by Manchester United on the opening weekend might have been harsh but is by no means forgotten. They conceded 16 goals in their next six league games and still have tendencies to concede preventable opportunities – leaving Kepa Arrizabalaga prone to unforgiving criticism too often.

Before their derby win, they had won just two of seven matches (all comps) and needed a 2-1 victory against Lille to secure passage into the UCL last-16 as Group H runners-up.

They face Bundesliga champions Bayern in February and March with a quarter-final berth at stake. Although they boast recent success in meetings against the Bavarians, it’s clear they are underdogs against a resurgent side who cruised through the group stages.

Despite discussing their more experienced players, they equally have a number of key men who aren’t as suited to playing in such a high-pressure environment and dealing with various situations when things aren’t going so well. Lampard is ambitious and will be keen to warn against overconfidence, but they haven’t yet displayed an ability to win ugly and don’t really have a reliable plan B if losing their way in games.

They’ve already had a little wobble, so who is to say that doesn’t continue or re-occur in 2020 – especially if they get their transfer business wrong next month? A lot has been said about the need for general defensive reinforcements, ala Ben Chilwell and Nathan Ake, but would they target attacking players as a more prominent issue to resolve?

They need to lessen the goalscoring load off Abraham, meaning more minutes and responsibility for Michy Batshuayi. Or, being tempted to dip into the market for a creative alternative – Crystal Palace’s Wilfried Zaha and Jadon Sancho at Dortmund have both been heavily linked. 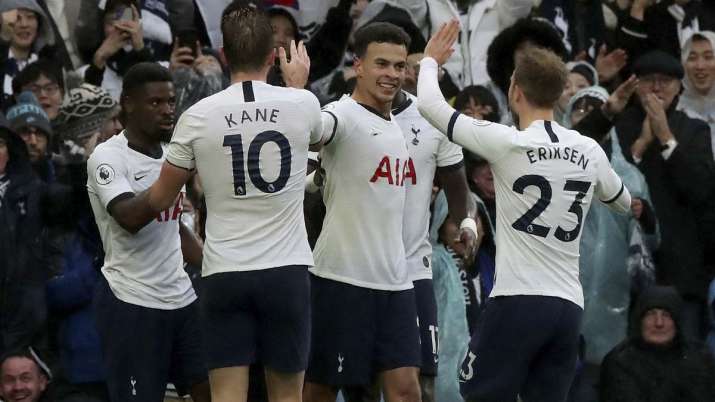 Tottenham players celebrate during their comeback win over Brighton on Thursday

Tottenham have a squad packed with key players who are all motivated for differing reasons. Harry Kane has been heavily criticised for what many believe is the start of his decline, though the captain has 16 goals and two assists across all competitions this term.

Dele Alli’s inconsistent form was also another target of frustration in the wake of Pochettino’s sacking, though the playmaker has stepped up significantly in recent months – since scoring a late winner against Watford on October 19, he has six goals and three assists across all competitions.

Club-record signing Tanguy Ndombele has shown flashes of individual brilliance but the Frenchman is yet to really shine under Mourinho and questions over his fitness continue to intensify, after he wasn’t involved whatsoever during their 2-1 win vs. Brighton.

Christian Eriksen’s contract expires in six months’ time and he’ll be eager to show prospective clubs across Europe why they should be offering him a lucrative deal, with the Denmark international free to speak to interested clubs from January 1.

After his silly red card against Chelsea, Heung Min-Son is suspended until January 5 but don’t let that detract from the fact the 27-year-old has scored 10 and created nine more goals already this term.

With all of those players in mind, you’d be silly to bet against them surprising everyone again after their UCL heroics last season. After all, they were fortunate to finish runners-up in Group B and ultimately finished 90 minutes short of lifting their first Champions League trophy.

Currently, only three points separate themselves and Chelsea, while plenty of players have a point to prove under Mourinho if they value their long-term future at the club.

That being said, Spurs’ sluggish start to 19-20 hasn’t improved significantly and they’ve made it clear not to expect much winter business during Mourinho’s first transfer window in charge of his new employers.

Many justifiable suggestions claim the bulk of their existing squad seem tired and past their peak as a collective unit who powered themselves into title races in recent seasons.

Kane – besides his goals – looks a shadow of his former self, while there are continued questions about their defensive situation and a midfield that Mourinho hasn’t seemed to help settle yet.

The buzz from the Portugese’s arrival has already started to wane and they have been exposed by pragmatic sides. Conceding too many goals, he doesn’t yet have a settled first-choice eleven when everyone is fit and that much is clear by his substitution choices.

Some of those same key players continue to underperform against big teams, while there’s a handful of first-team players who either aren’t being utilised properly or are struggling for regular minutes – Lucas Moura just isn’t a centre-forward, Giovani Lo Celso has played sparingly while Mourinho is mishandling Eric Dier in midfield.

Out of the three sides, Arsenal possess the best strikeforce when all are fit and firing. Pierre-Emerick Aubameyang (12) is only behind Vardy (17) in the goalscoring charts, while Alexandre Lacazette (5) and Nicolas Pepe (2) have underwhelmed this term.

There are no easy games but should they manage to hit a good run of form, the creative possibilities are endless. While Granit Xhaka has been linked with a move next month, Lucas Torreira is proving their midfield woes aren’t as bad as they appear. Matteo Guendouzi (20) has been off-the-pace recently but remains highly-rated too.

They have talented youngsters waiting in the wings eager to stake a first-team berth too: Gabriel Martinelli, Bukayo Saka (both 18), Emile Smith-Rowe (19) and Reiss Nelson, who just turned 20.

While Mesut Ozil remains a divisive figure among fans and critics alike, it’s clear the Germany playmaker is equally one of their most important players. Energised by Arteta’s arrival and influence, Ljungberg will remain part of the coaching staff and they are doing their utmost to repair squad disharmony while drastically improving results.

Remember how I said they have the best attack? If you combine the trio, they cost a whopping £175m and are capable of forming a devastating frontline – though it would be to Arsenal’s detriment defensively and see one or more of them are deployed out of their preferred positions.

While they might have the best strikeforce out of the three, they comfortably have the worst defence too. Among the league’s top sides, their backline is desperately poor and the Gunners have developed a reputation for conceding preventable goals with worrying ease – regardless of the opposition.

It’s why signing defenders like David Luiz backfired horribly for Unai Emery, as the Brazilian has been exposed on numerous occasions already this term and undoubtedly contributed to the Spaniard’s sacking last month. Succeeding Arsene Wenger was never going to be an easy task, but Emery didn’t improve this team. Instead, they got worse and he ruined the squad dynamic within while doing so, allowing them to stagnate too long.

Whether playing stars out of position or freezing them out completely, Emery treated them poorly and allowed a toxic atmosphere to fester. This was all without establishing a true style or tactical plan that everyone could get behind, so how can you expect Arteta to turn things around so quickly?

That much was evident upon Ljungberg’s arrival: they didn’t improve and he looked bemused at times by the way some of them were performing. Even the most optimistic of Arsenal fans cannot see both their London rivals dropping that far from their existing positions, especially as they themsleves are nowhere near the finished article.