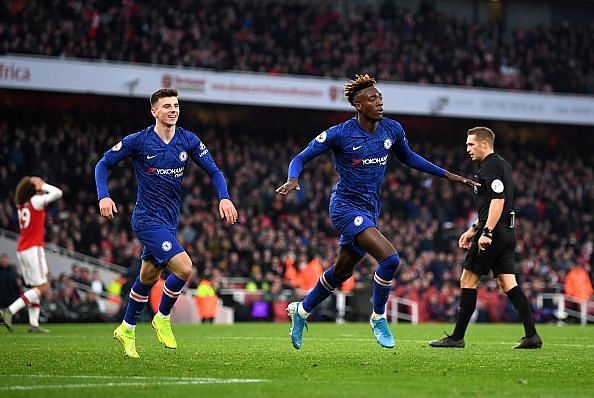 Jorginho and Tammy Abraham’s 12th league goal ensured Chelsea recovered from a one-goal deficit to snatch all three points and win late on against London rivals Arsenal – finishing the decade with a four-point cushion in fourth place. But which players excelled while others struggled at the Emirates on this occasion?

Pierre-Emerick Aubameyang’s diving header saw the deadlock broken after 13 minutes for his 13th league goal, as Arsenal started brightly and looked to expose Frank Lampard’s three-man backline at will.

Both sides made early changes, though Arsenal were forced into one. Calum Chambers (knee) limped off and was replaced by Skhodran Mustafi, while Lampard reverted to a four-man formation with fullback Emerson replaced for a progressive Jorginho.

It was certainly a fractious derby with fouls aplenty (32) and nine bookings over the 90 minutes, though there definitely should have been more too. Matteo Guendouzi was fortunate not to have given away a first-half penalty after hauling down Abraham off-the-ball, while already on a booking.

Jorginho, booked 20 minutes after coming on, should have seen red after an overzealous challenge on Guendouzi near the centre circle. Referee Craig Pawson saw the foul but instead brandished a card to Lacazette for dissent – five minutes later, the Italian wheeled away to celebrate Chelsea’s equaliser after a costly Bernd Leno error from Mason Mount’s freekick.

Four minutes later, Tammy completed the comeback to win the match on a devastating counter-attack – turning Mustafi inside out after being teed up by Willian, before converting from close-range.

So, here’s a look at the best and worst performers from Chelsea’s smash-and-grab victory in north London: confining Mikel Arteta to his first defeat as Gunners boss. 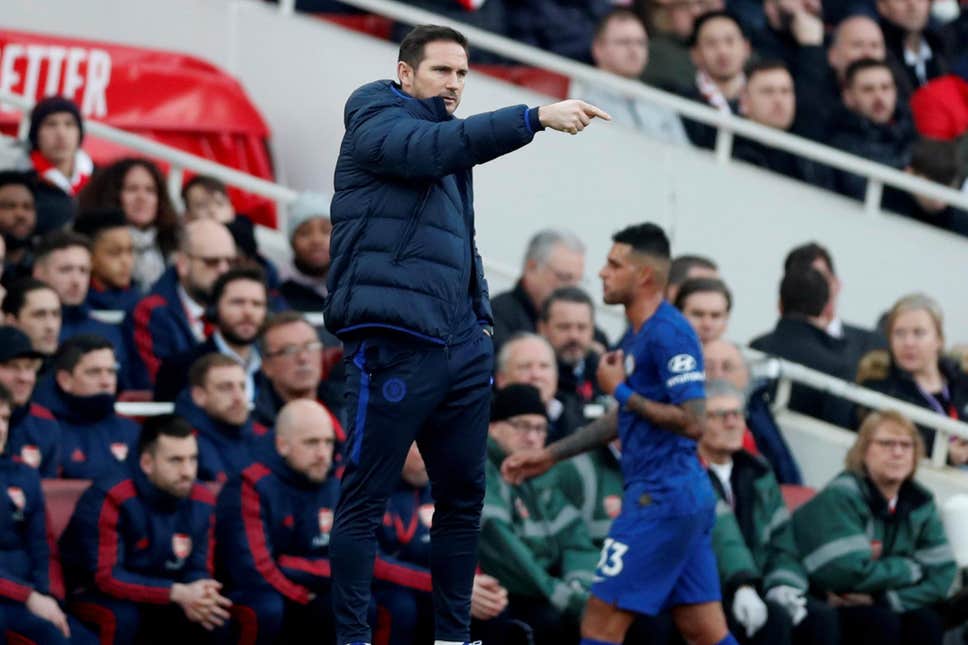 Defensively lax and exposed too often, Emerson should have done better to tightly man-mark Aubameyang in the build-up from Özil’s corner. Instead he was caught ball-watching and the Gabon international duly took advantage of sloppy positioning to punish him with a diving headed finish from close-range.

Again culpable as Arsenal frequently broke down his side, the Italian offered inadequate defensive protection for Fikayo Tomori and wasn’t a reliable passing outlet (69.2% pass success) either.

The 25-year-old might have started to settle and improve as the match continued, but was clearly struggling as Ainsley Maitland-Niles and Reiss Nelson continued their combination play, enjoying success down that side.

An abrupt alteration was an effective measure of Lampard’s frustration and awareness a change was needed, so Emerson couldn’t really have any complaints about being replaced. 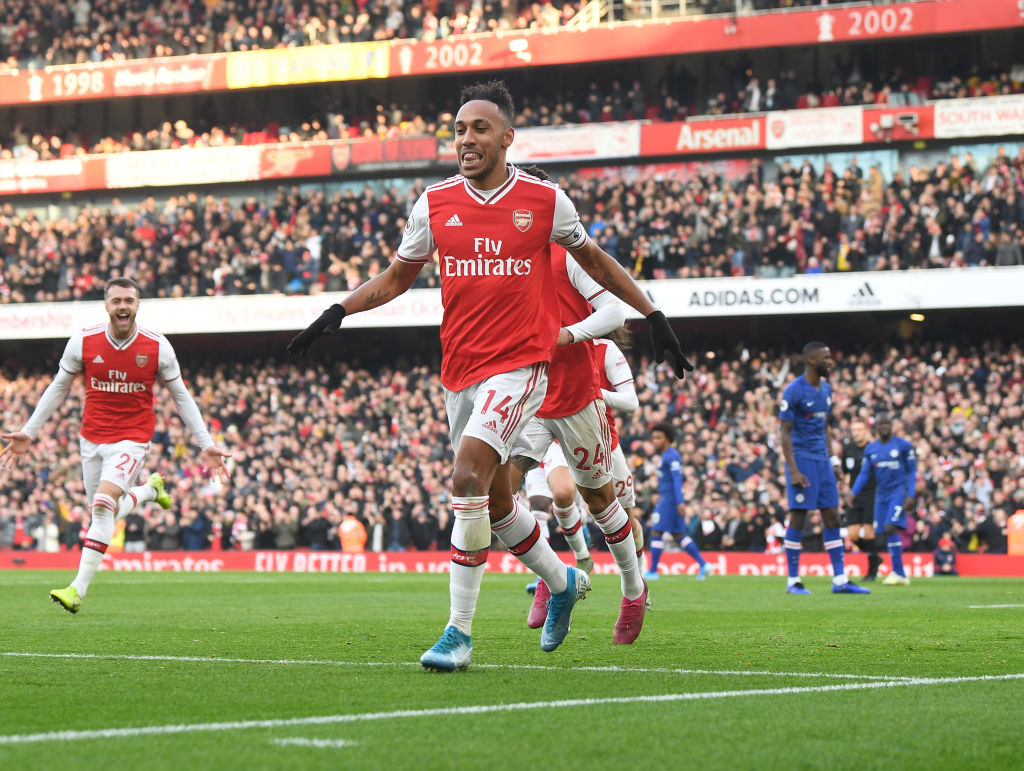 Aubameyang did well to break the deadlock with a header when he did, at a stage in the game where Arsenal were firmly ahead. The movement and anticipation he displayed in the build-up to Chambers’ cross was crucial – effortlessly ignoring the attention of Emerson and making no mistake.

Plenty is said about his overall play and whether he does contribute to more than just goals in games, like linking midfield with attack, dropping deep and helping his teammates. He certainly did the latter against Chelsea: completing three tackles, two interceptions and clearances over the 90 minutes as a motivated captain that didn’t deserve to lose here.

Aware his side’s attacking influence was dwindling, he was unafraid to track back and support his teammates – sometimes too eager – but Auba’s defensive contributions didn’t go unnoticed. There wasn’t much he could have done differently for Chelsea’s two goals: the first was direct from a setpiece, while their second was a counter-attack as Aubameyang waited patiently in the box for Maitland-Niles’ cross.

It didn’t arrive and instead was partially headed clear by Antonio Rudiger. 15 seconds later, Chelsea had snatched the lead. It was a cruel ending to a game Aubameyang never stopped running in, trying to create for teammates or fashion something himself. Arsenal only have themselves to blame. 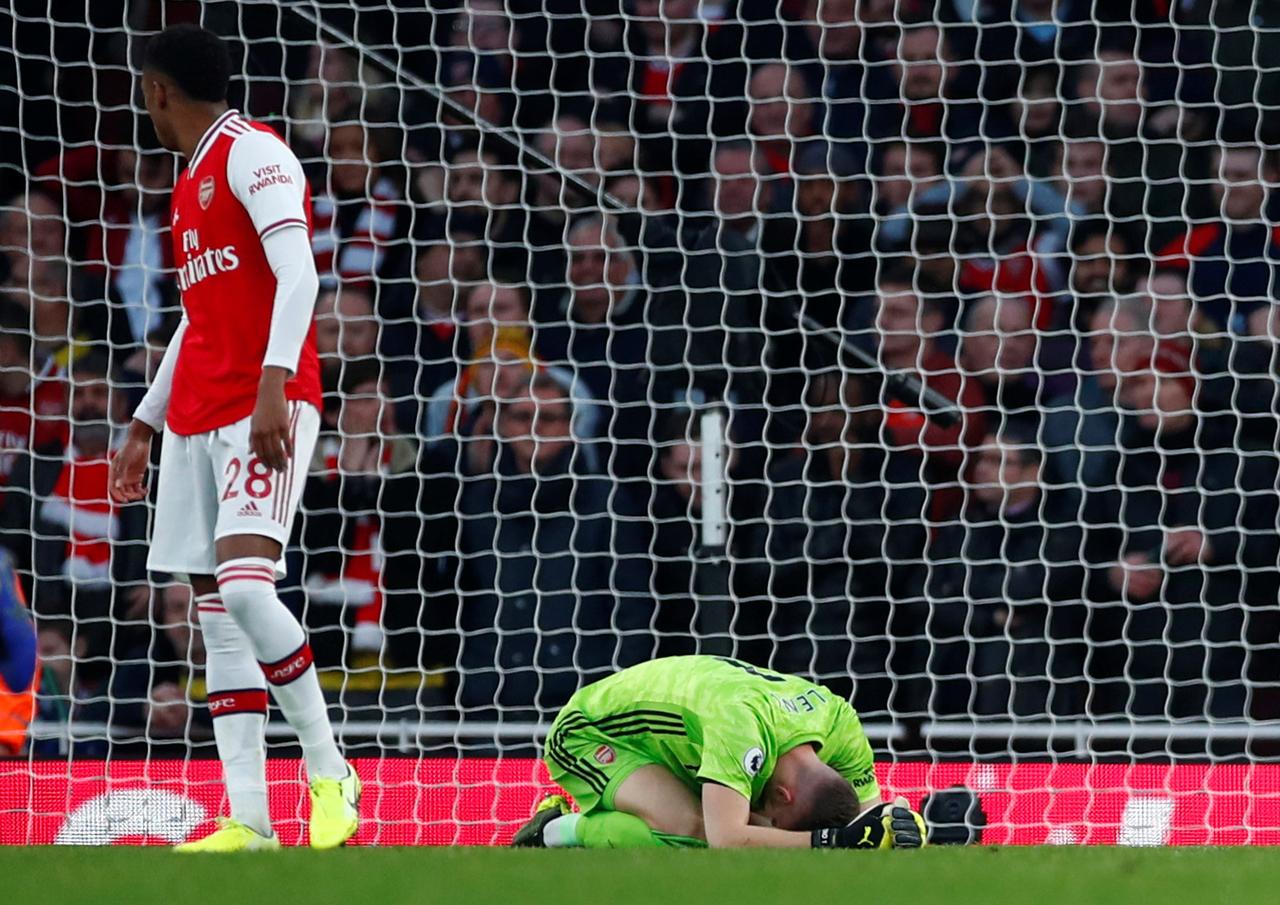 It was an afternoon to forget for Arsenal’s number one, in the type of match where his status as a Player of the Season candidate should have been reinforced – not cut in half.

Newcastle’s Martin Dubravka (81) overtook him as the league leader in saves made this weekend after making seven against Everton on Saturday, but Leno has been one of very few consistent performers at Arsenal in 2019-20. The usually dependable German, 27, has only kept three Premier League clean sheets this term and despite his defensive teammates proving a real hindrance to those statistics, displays like these don’t help.

He was forced into making an awkward save in the sun to deny Mason Mount moments after Willian’s clever short freekick in the first-half was poorly dealt with, though he didn’t have much else to do for large periods. So when Mount’s inswinging delivery was drilled into the box, Leno gravely misjudged the flight of the cross as he left his line to punch clear, allowing Jorginho to slot home into an empty net at his far post.

His distribution was shaky upon occasion but nothing could have prepared Arsenal for what was to come in the final ten minutes. He was unlucky with their second but could have atoned for his error minutes later to deny Tammy, even if it was from close-range.

Instead, he watched the ball slip through his legs a few yards out and Arsenal’s slender lead had evaporated within five minutes. They were suddenly chasing a point, which proved too little too late.

After a similar encouraging display away at Bournemouth on Thursday, Mesut Özil delivered another promising showing on this occasion. Beginning with energy and creative invention, Arsenal have cried out for more of that performance this season.

His corner created Aubameyang’s goal, while he advanced forward with the same wily precision that has become his trademark over the years. Drawing opposition attention whenever he had the ball to feet, he was fouled on three occasions but that didn’t deter him from recycling possession confidently (84.4% pass success) and buzzing around – particularly down their right-hand side, where Arsenal thrived in transition.

He created a team-high two key passes, won six of 13 duels and was determined to make Chelsea pay for their slow start. However, they eventually settled and Lampard’s tactical switch had plenty to do with that, though Arsenal’s failure to double their lead and made their early pressure count proved costly.

The Blues dominated possession (65%) after the break and it meant Mesut didn’t have ample opportunity to orchestrate attacks as much as he would have liked. Nonetheless, he still delivered a good performance and was rightly given a warm reception when replaced by Joe Willock with 15 minutes left. The fact they were 1-0 up and lost 2-1 without him doesn’t help their cause for playing better without his presence. 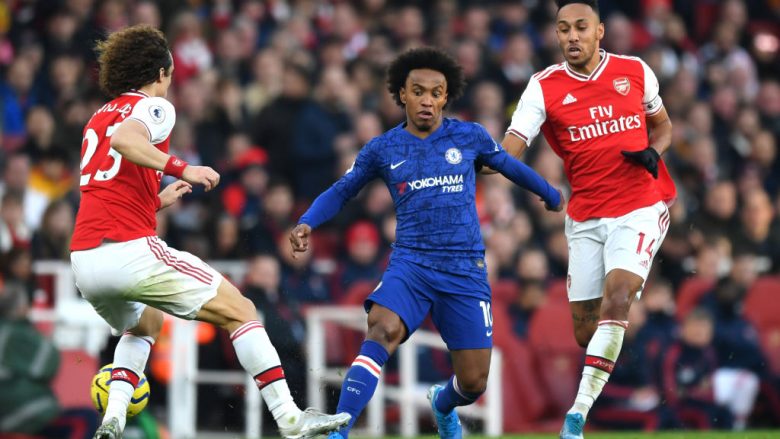 Showing flashes of his creativity upon occasions in the first-half whilst other teammates were struggling to settle was a sign of things to come. His experience came into play early on, drawing a needless foul (and booking) from Guendouzi in a dangerous area.

Willian started as he meant to go on. Completing three of his four attempted dribbles, he retained possession well (85%, 34 successful passes) and was a continuous problem that Arsenal just couldn’t keep at bay long enough to nullify throughout.

Interchanging positions with Mount as the two men supplying Abraham up-top saw the trio combine well in the latter stages of the second-half, whereas their combination play was effectively stifled before Jorginho’s arrival saw him orchestrating play behind them.

He did well against Maitland-Niles and Bukayo Saka in particular, manipulating the ball to his advantage while leaving the winger-turned-fullback in his wake repeatedly, which forced the hosts to double up down that side.

His role in their winner speaks for itself: sensing a potential chance from the edge of his own area, latching onto Callum Hudson-Odoi’s header and feeding Abraham before speeding away in support to Tammy’s right. Bursting beyond Saka, he left David Luiz for dead and just as you thought he’d fluffed the chance by taking the ball wide, his reverse pass into Abraham was perfectly-weighted so he could sweep past Mustafi and finish.

He created a game-high seven key passes and never stopped running, testament to an experienced player who has played 264 league minutes in the past seven days.