Arsenal started 2020 with a morale-boosting win over Manchester United in the final league fixture on New Year’s Day, as first-half goals from Nicolas Pepe and Sokratis gave Mikel Arteta his first victory in charge of the Gunners.

They raced into an early lead after £72m summer signing Pepe converted from close-range, after Sead Kolasinac’s driven cross was deflected into his path. David de Gea was given no chance and consequently wrongfooted, as the Ivorian forward recorded his third league goal of 2019-20.

Just like against Chelsea on Sunday, Arsenal were comfortably the better side in the early exchanges and playing with the type of swagger and guile we have seldom seen since Arsene Wenger’s departure in May 2018.

The difference this time though, was they importantly earned a deserved two-goal cushion just before half-time from an unlikely source. Sokratis reacted quickest to smash into the roof of the net, after a poorly defended corner saw de Gea parry Alexandre Lacazette’s header towards the Greece international’s path.

The second-half was certainly nervy viewing for the hosts, as United eventually settled into the game and enjoyed sustained spells with possession and half-chances. Andreas Pereira, Anthony Martial and Marcus Rashford all had efforts on-goal, while hearts would have been in mouths when Aaron Wan-Bissaka went down in the box.

Fortunately though, the Gunners defended with dogged determination and as the clock continued to tick down, they held their nerve to record only their second clean sheet since October 6 – having played 17 games since then across all competitions.

As for United, it’s a forgettable start to the New Year. After successive wins, they now lose ground in the top-four race, after Chelsea drew 1-1 at Brighton while Southampton were 1-0 winners against Tottenham. So without further ado, here’s a look at Arsenal’s top five performers from a memorable win – kicking off the new decade in style:

Poor form and injuries have seen Lacazette‘s progression stall in recent months. The fact the Frenchman has only scored six goals and created one assist this term after 17 appearances doesn’t help, even if he’s only completed a full 90 seven times to date. It has led to a lot of critics suggesting he’s just not that good a centre-forward – either that or he’s mentally checked out of Arsenal already, preparing for a lucrative summer move.

However, displays like these simply prove that untrue. He led the line confidently in Arteta’s 4-2-3-1 formation, being flanked by Pierre-Emerick Aubameyang, Pepe and Mesut Özil: this match marking a first time the quartet has been unleashed all at once.

He was an ever-present threat for United’s backline to deal with by linking attack with midfield, utilised his body well to draw fouls and kept the visitors on their toes trying to mark him out of the match.

That proved easier said than done, just ask Harry Maguire: their £80m defender was turned inside-out effortlessly by Lacazette in the box, before he dragged a shot on his weaker foot wide. There were still one or two instances where he didn’t fully anticipate potential avenues to run into, half-chances were squandered and it’s clear that he isn’t yet 100% sharp.

Importantly though, it didn’t stop him from making a committed effort to press from the front and set the tone against a United side that started slowly and weren’t given ample time to pass out from defence. If you think his role as their lone centre-forward is overstated, let me refer you to Ryan Giggs’ verdict on Martial’s performance – compared with his compatriot:

“He [Lacazette] sets the tone and gives a massive lift to the whole team. If you’ve got a centre-forward harrying, closing defenders down, it’s huge for the midfielders. You see a striker doing that, then you’re up with the play.

Martial against Newcastle and Burnley, he was like that. Here, he wasn’t. Maybe he did press a couple of times, looked back and the midfield weren’t as compact as they should be. But Lacazette was impressive, with and without the ball.”

With two successful dribbles, key passes and tackles completed, one interception made and 9 of 16 duels won, it was a tireless display by a player who will hope this performance is a springboard for future success in the weeks and months to come.

Mesut pulled the strings in midfield and continued probing, even when United settled

Just like his performance against Chelsea, Mesut Özil delivered another encouraging display and this time he wasn’t replaced – they won and kept a clean sheet! If anyone personifies the eye test, it’s the German playmaker.

He’s got no goals and only two assists in 14 appearances (all comps) this term and yet there’s no doubting him as Arsenal’s creator-in-chief. Importantly, you can see he’s relishing the challenge under Arteta and doing things many wouldn’t expect from him.

During the build-up to Pepe’s goal, Mesut won the ball back in his own half near Ainsley Maitland-Niles as United looked to progress intricately. After a switch of play into Granit Xhaka, Arsenal advanced in numbers and a few seconds later, Kolasinac sped to the byline and fizzed a cross into the box which deflected into Pepe’s path. It was sloppy defending on United’s part, but that whole move started with Mesut’s defensive work.

That piece of shrewd defending rather typified Özil’s performance: he worked hard, played a plethora of deft passes that should have been better received and you could clearly see his inventive nature was working in overdrive to punish United for allowing him too much space to free roam.

He would have had an assist or two, but it’s also obvious that his teammates aren’t always on the same creative wavelength as him either – evidenced when potential openings broke down once he fed the ball towards both Lacazette and Aubameyang.

For someone who is supposedly lazy and never delivers in big games, Mesut never stopped running and his intensity didn’t drop either, even as United got settled and crept back into proceedings midway through the second-half. Instead, he covered more distance than any other Arsenal player (11.54km) and that figure was only bettered by Fred (11.95km) – who certainly had his work cut out trying to stop them in midfield.

Pepe took the opener well and played full of confidence in the first-half, refreshing to see from a player who has been subject to all sorts of criticism since his club-record £72m move was made official last August.

He can consider himself unlucky not to have doubled their lead before half-time, hitting the post from distance with a well-struck effort that left David de Gea sprawling towards his near post, while he caused problems aplenty for United who couldn’t cope with him.

After that breakthrough game at the London Stadium last month, many supporters and critics alike were quick to suggest that was perhaps the turning point in Pepe’s Arsenal career. Although he – among others – struggled in the early part of the campaign, the fact he came with such a hefty price-tag didn’t help his confidence levels either.

In future, he has to deliver more regular performances of this calibre to warrant his selection. The quality is there, even when the application and decision-making might not be. His match stats speak for themselves: 26 completed passes (100% pass success), 8 of 16 duels won, four key passes and successful dribbles, one tackle and interception, one goal and woodwork hit.

However, it wasn’t surprising to see him replaced on the hour mark, as Arteta sensed he wasn’t performing with the same intensity levels with Arsenal finding themselves under pressure to start the second-half. That is to be expected, though he cannot afford to rest on his laurels with a determined Reiss Nelson eager for more first-team minutes. 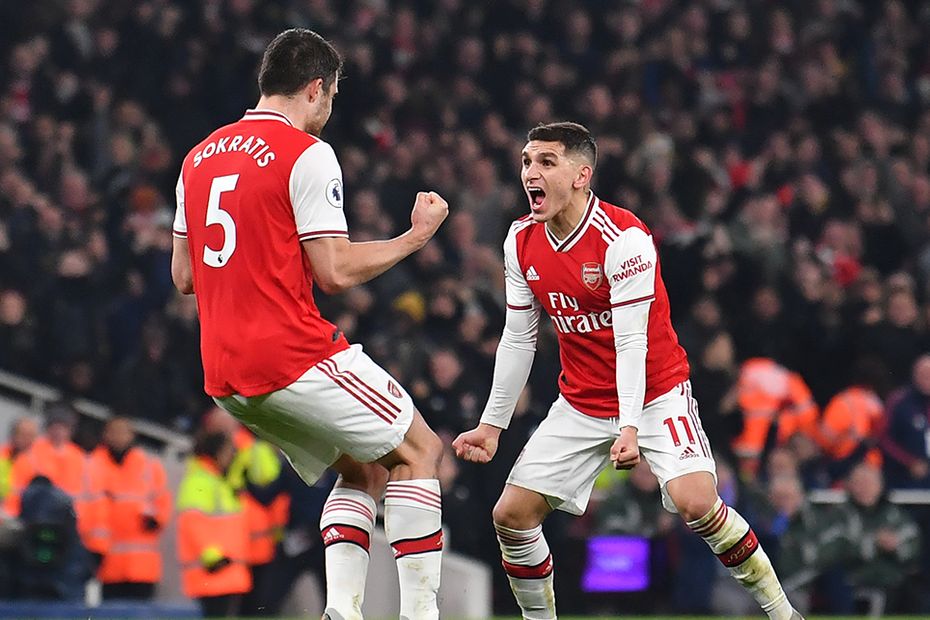 Sokratis celebrating with Torreira after a disciplined, dilligent display by the pair

While David Luiz gladly took the plaudits for Arsenal’s mature defensive display, it was the performance of his centre-back partner Sokratis which really caught the eye.

Besides his well-timed finish to double their lead on the stroke of half-time, the Greece international did more than his fair share of defending too in arguably his best game of 2019-20 to date.

Frequently coming across to cover for Luiz whenever the Brazilian ventured out of his position – either forward into midfield or sideways into a fullback role – he timed movements well and frustrated United attackers whenever they looked to get beyond him. Winning 6 of 9 duels contested, he completed four clearances, three tackles, one block and interception to accompany 85.5% pass accuracy over the 90 minutes.

Tracking Marcus Rashford like a hawk meant the Englishman was left frustrated whenever drifting infield and essentially man-marked out of the game too. While the 31-year-old didn’t celebrate every block or tackle as ferociously as Luiz, he nonetheless made a number of important defensive interventions, booming headers and the like.

The onus is on him to take this excellent display in his stride, to be motivated for more consistency and less error-prone performances in 2020. That’s easier said than done. 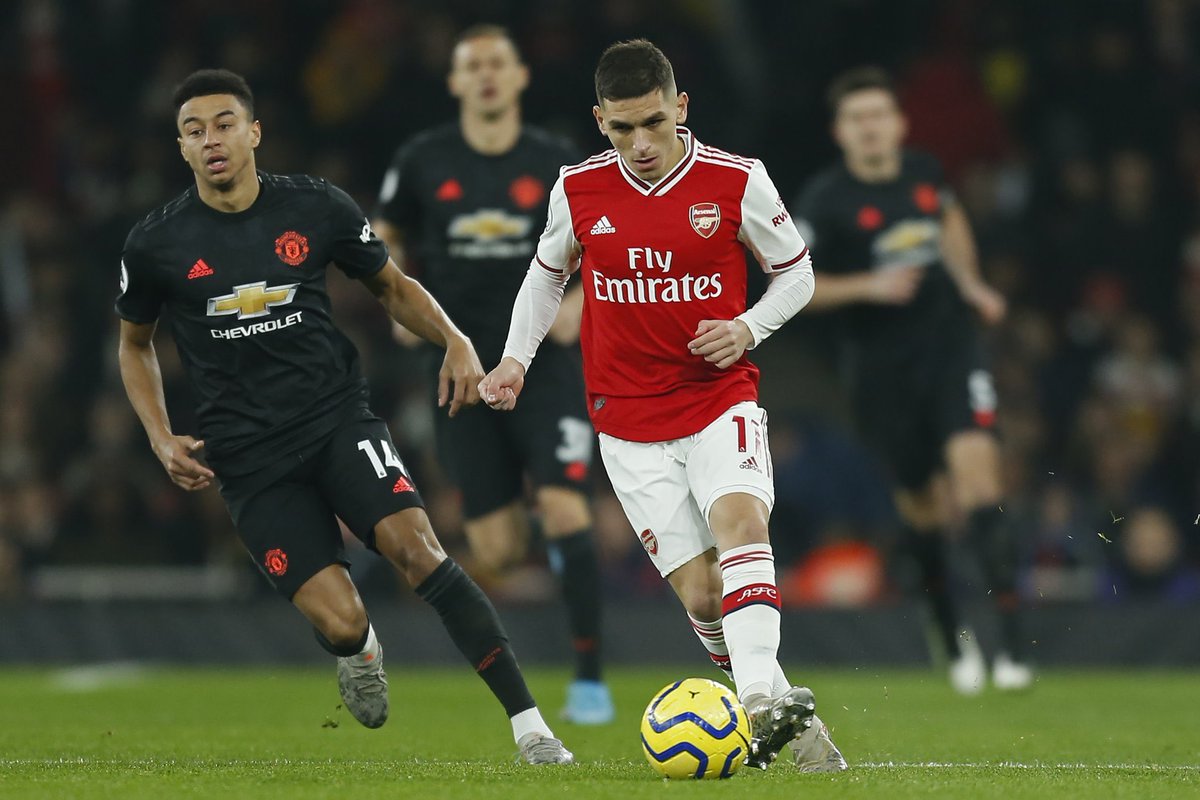 Just like against Chelsea, Torreira was brilliant and set the tone in midfield with his work

Just like against Chelsea, Lucas Torreira was brilliant here and after another confident showing in a televised fixture, the Uruguay international is finally starting to get the respect his play deserves. He almost scored shortly after the half-hour mark, twisting and turning his way through United midfielders on the edge of the box before firing an effort narrowly wide of de Gea’s far post.

As usual, he displayed the bite and infectious tenacity that convinced Arsenal to swiftly snap up his services just before shining with Uruguay at the World Cup in Russia. His relentless attitude and the fact he’s unafraid to impose himself on opposition players is admirable to say the least.

So much so that even with those physical disadvantages that make him exploitable, United players rarely looked to get beyond him. He’s brilliant at reading danger and again displayed those capabilities against a United side who could have easily recovered during a second-half packed with nerves and tension around the Emirates.

Acting as a reliable shield alongside Granit Xhaka for Arsenal’s four-man backline, Torreira was determined not to let them pass. Even with those physical disadvantages that make him a target, United players rarely looked to get beyond him in one-on-one duels. They were about to find out what would happen next: Rashford and Martial in particular being effortlessly stripped off possession when edging forward dangerously.

Only Fred and Özil covered more ground than Torreira’s 11.41km over the 90 minutes, made more impressive when you realise he was down with a knock and in some discomfort for 15 minutes. They were readying Matteo Guendouzi to replace him – instead he urged them to replace a struggling Lacazette (cramp) instead, took on some energy gel and persisted with the same steely desire and concentration to win.