Middlesbrough have completed a shrewd pair of loan deals ahead of their FA Cup tie with Tottenham this weekend – signing Manchester City winger Patrick Roberts and versatile forward Lukas Nmecha until the end of the 2019-20 campaign.

In the space of 24 hours, the Championship side have significantly strengthened their attacking options for the remainder of this season by agreeing terms with the City duo.

22-year-old Roberts and 21-year-old Nmecha had barely played on loan spells at Norwich and VfL Wolfsburg in the early months this season. Consequently, the Citizens exercised their option to recall the pair from their respective stints elsewhere with a multitude of clubs said to be tracking their progress, hoping they’d convince City to a six-month deal.

However, Boro boss Jonathan Woodgate – who made his managerial debut on Teeside after signing a three-year contract himself last summer – revealed their plans have been brewing quietly for a long time.

Having friends in high places helps

As quoted by GazetteLive, Woodgate said: “The two players fit into what we want. I know Brian Kidd and Jason Wilcox there, I know a few of them but I met the sporting director about a month ago now. I thought it was important to do a lot of groundwork and try to get these players over the line as early as possible.”

“It’s not about having a connection, it’s about being the right fit. It hasn’t worked [for either player] but they were in the top division – Premier League and the Bundesliga.

I went to see the two players face-to-face and it was a good decision for the football club. I am sure they had untold options but chose Boro. Hopefully, we build that relationship with City.”

Assessing the creative duo themselves

Plenty was expected from Roberts when initially joining Manchester City from Fulham as a highly-rated teenager. Immediately excelling in the UEFA Youth League saw him justify a loan move with the lure of first-team football elsewhere – where he turned heads and earned cult hero status in Scotland with champions Celtic.

However, that loan seemed futile if he didn’t return and earn a starring role for a top-flight side in England. Instead, he made the bold decision to go abroad with Girona in La Liga, where inconsistency and underwhelming teammates saw him frustrated as they ultimately were relegated that season.

2019-20 was supposed to be his breakout year, injuries permitting. He joined Norwich during pre-season, but only played 23 Premier League games – three brief cameos – since. 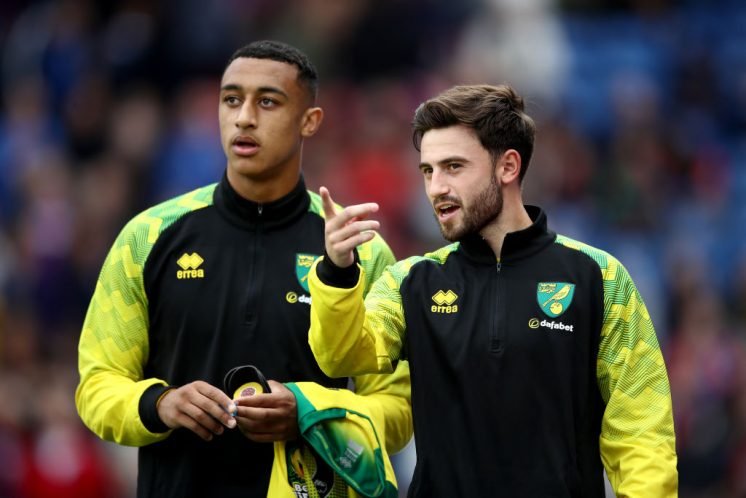 It’s been a frustrating start to 2019-20 for Roberts, who will look to light up the Championship

Considering he turns 23 next month, this feels like the start of a new chapter as he aims to rebuild his reputation before it’s too late.

As for Nmecha, he still has a bit more time to decide his future. That being said, it seems 50-50 as to whether he wants to play in England on a long-term basis or prefers to be challenged abroad, like during his brief stint among home comforts in Germany.

He played for England at youth level (U16 to U21, 31 caps) but has since pledged his allegiance to Germany – where he’s made eight under-21 appearances to date. Having been at City since he was an U9, Nmecha’s ability hasn’t been questioned. Transitioning to the competitive level though, has proven more difficult: just ask Dominic Solanke.

He scored three goals and created eight assists for Preston in the Championship last year, alternating between roles as their centre-forward and opposite flanks.

However in twelve appearances for Wolfsburg this term (all comps), the 21-year-old hasn’t got a single goal contribution to his name. Despite this, his case isn’t helped when you find out he’s started just one of the 12 – a 3-0 away defeat by Borussia Dortmund.

Both need patience, but are Boro willing to give them that luxury? Time will tell.

Boro’s top league goalscorer this term is Britt Assombalonga (27) with six goals in 20 Championship appearances. He’s been there for two-and-a-half years, having signed for £15m from fellow second-tier side Nottingham Forest.

More was expected from Manchester United academy graduate Ashley Fletcher, having signed a four-year deal from West Ham in the same summer of 2017. He’s 24 now, with six goals and four assists in 26 appearances this term.

Rudy Gestede (31) has been used sparingly but featured more prominently over the last month – scoring his first league goal since February 2018 during their 2-0 win over Preston on New Year’s Day.

Both players could make their Boro debuts on Sunday, during their FA Cup third-round tie at home against Tottenham (KO: 2.01pm).

Following that, they face Derby, Fulham, Birmingham and Blackburn between now and February 1. By that time, Woodgate will expect to complete a few more acquisitions to bolster competition as they sit eight points off the playoff spots after 26 games this term.