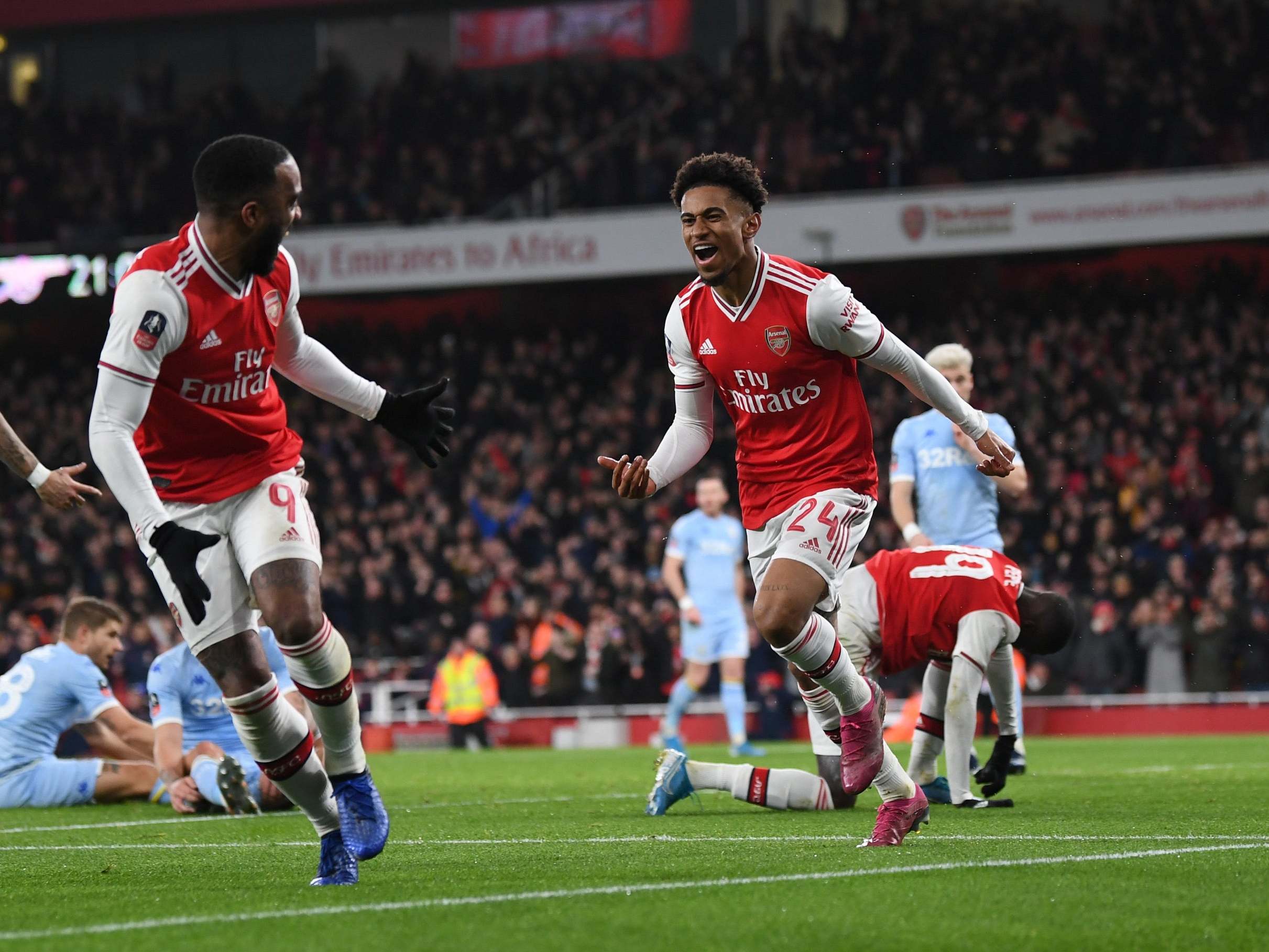 Reiss Nelson’s second goal of the season proved just enough for Arsenal to scrape through into the FA Cup Fourth Round, after a hard-fought 1-0 win over Championship side Leeds – who gave a great account of themselves but faded in the latter stages, after a brilliant first-half showing. They now face an away trip to Premier League strugglers Bournemouth for a place in Round Five on January 25.

The first-half was all Leeds: they effortlessly pressed their hosts out of possession, created chances aplenty with a number of well-worked passing moves and ultimately should have earned an advantage before half-time for their tireless efforts.

You could sense tension building around the Emirates, as the Gunners were sleepwalking themselves out of the FA Cup – a competition they usually excel in – at the first time of asking in 2020.

15 – Leeds attempted 15 shots in the opening 45 minutes against Arsenal, the joint most shots the Gunners have faced in the first half of a game this season (also facing 15 in the first half against Liverpool in the Premier League back in August). Lethargic. #FACup #ARSLEE pic.twitter.com/HKiGaWfhok

Jack Harrison and Ben White were denied by Emiliano Martinez, while Patrick Bamford hit the crossbar. Egzijan Alioski came close twice: firing narrowly wide of the far post before Martinez produced a brilliant reflex save to claw his headed effort away to safety.

Mikel Arteta stressed urgency at the break and after their lethargic start, that’s precisely what he got. Alexandre Lacazette hit the crossbar with a well-struck freekick, before forcing a save from Leeds’ teenage debutant goalkeeper Illan Meslier while Matteo Guendouzi curled an effort narrowly wide – all within seven minutes of the restart.

Their pressure ultimately told, as Nelson scored just before the hour mark, albeit in messy circumstances. Nicolas Pepe weaved his way towards the area after shrugging off a challenge on the halfway line, teeing up Lacazette to his right. The return pass was deflected by Gaetano Berardi, but fell to Nelson who bundled home from close-range.

Leeds still threatened, if only in staggered flashes. Bamford and debutant Robbie Gotts looked dangerous in transition, even though decision-making was poor. As time wore on and both sides made alterations, Arsenal closed out the game with a more determined display than the one which suggested a shock result was on the cards in the first 45.

Without further ado, here’s a look at five hits and flops from their narrow, hard-fought victory: 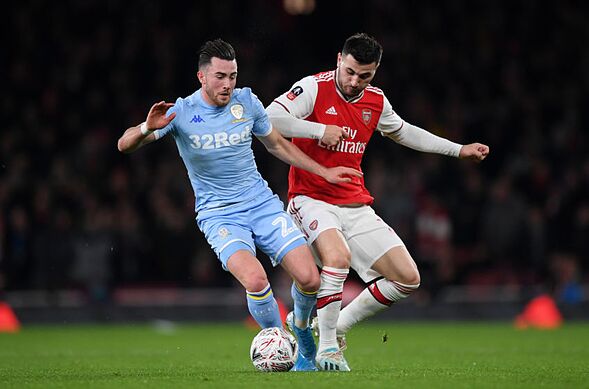 I was tempted to go with Rob Holding or one of the Leeds midfield, for how they relinquished control in the second-half, but was compassionate for differing reasons. Instead, I chose Sead Kolasinac: another polarising figure for Arsenal, whose defensive frailties are emphasised in games like these against teams who know how to exploit him.

In a game packed with 31 fouls as tempers threatened to flare towards the end, Kolasinac was one of only two players – Stuart Dallas the other – to receive a booking from referee Anthony Taylor. It’s his second consecutive booking after the United game in midweek and following a sluggish start to proceedings by Arsenal on this occasion, the Bosnian’s ability to teeter between solid and worrying continues to intensify.

Leeds created chances aplenty down his side, largely because he didn’t know when to shift infield as an auxiliary third centre-back or stay out wide when pressing – made even more difficult by the well-worked passing combos their visitors were playing with ease.

Gotts and Harrison especially were bright in the early going, while Kolasinac’s positioning forced David Luiz to be more busier than he would have liked. Kalvin Phillips was running the show in Marcelo Bielsa’s 4-1-4-1 formation and Bamford would have been licking his lips against an Arsenal backline who looked destined to concede.

He, like the rest of his teammates, improved significantly in the second-half but the game could’ve been out of reach by then. You can only wonder how Kieran Tierney (shoulder) and even makeshift fullback Bukayo Saka feel watching him struggle from the sidelines. 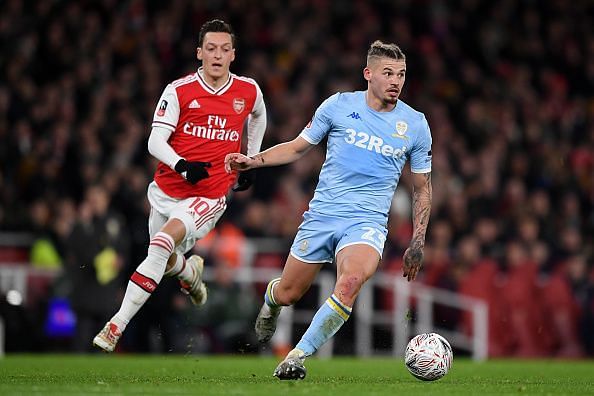 Kalvin Phillips attracted interest aplenty last summer when Leeds faltered in the Championship playoffs, meaning another year of second-tier beckoned for the midfielder.

Premier League sides were monitoring him before but now, it’s much more intense and Leeds supporters calling for him to be capped by Gareth Southgate’s England have proven justified in their praise.

He turned 24 last month and the versatile midfielder excelled, particularly in a first-half where Leeds should have at least scored one or two before the break.

Kalvin Phillips for Leeds in the first half against Arsenal in the #FACup:

Critics were again quick to highlight Mesut Özil’s muted role in the first-half, but that was largely through Phillips’ intelligence and discipline to man-mark the German playmaker, forcing him into ineffective areas of possession where he would record stats like these:

13 – Mesut Özil has had just 13 touches against Leeds; the fewest of any player in the first half. Only one of those touches came in the final third, a corner kick. Missing. pic.twitter.com/iqzoKN2aKa

He knew he had to increase his workrate second-half and did so, but was against a worthy adversary who made the evening an especially difficult one.

He won 10 of 15 duels contested, a game-high nine tackles, one clearance and interception to accompany his four key passes (83.8% pass success) over the 90 minutes.

Leeds currently top the Championship on goal difference from West Brom and it’s essential they keep Phillips fit if they are to achieve automatic promotion in May. Not only would it set up a long-awaited Premier League return but allow Kalvin’s talents – among others – to be appreciated on a wider scale across England and abroad too. 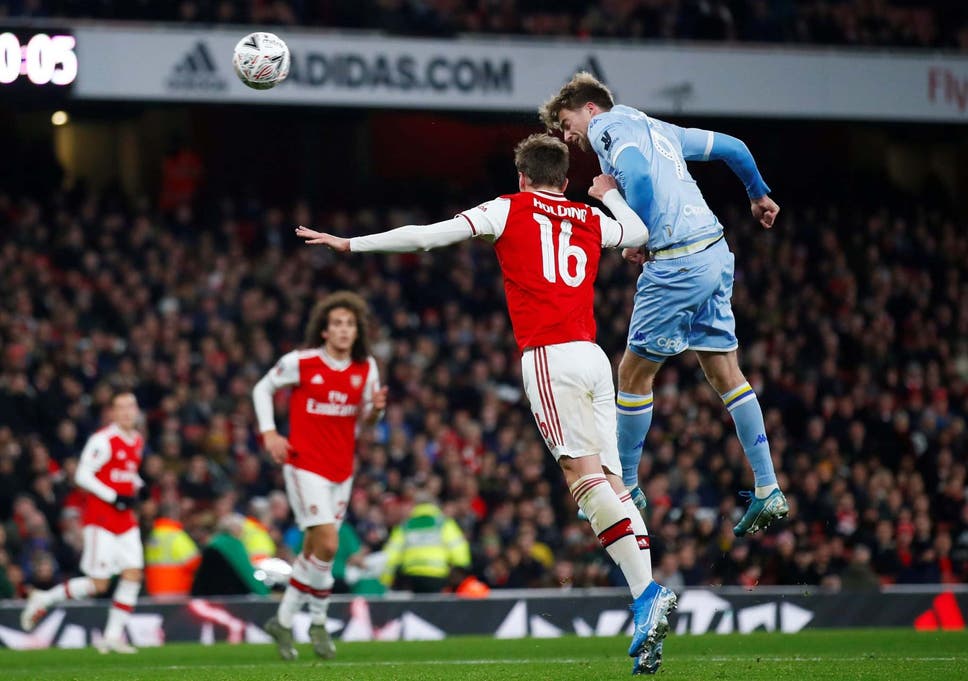 Bamford’s frustrating decision-making was a theme vs. an Arsenal side there for the taking

He netted three goals in his last three games of 2019 but this occasion, away at the Emirates in a televised Cup tie, really should have been Bamford’s time to shine at the start of 2020 – another year where the undervalued forward might flatter to deceive.

Registering a game-high six shots on goal, the 26-year-old was rightly left frustrated on an evening where Arsenal’s slow start should have given him precisely the momentum he needed to fire Leeds ahead in a game they were dominating.

As he weaved his way into the box and let fly with three Arsenal players surrounding him, his effort cannoned back off the crossbar as the Gunners were given another warning sign. It took some time and an Arteta teamtalk, but they eventually listened.

Having missed three promising header opportunities in the first ten minutes, then to hit the woodwork as Leeds continued plugging away? You’d be right in thinking this was not to be Bamford’s day infront of goal. Even still, that doesn’t excuse his poor decision-making when it mattered most.

While he won 5 of 9 duels contested, played a key pass (75% pass success) and was an ever-present threat in the opening half-hour, his creative influence weaned significantly after that. Those half-chances in transition after half-time? He either made the wrong decision – going for goal or passing when the chance had already gone – or rushed into mistakes and was dispossessed, usually by a returning Rob Holding.

If anything, the battles between himself and Holding should have been something he relished. Instead, he often saved the 24-year-old centre-back’s blushes at the back by forcing a well-timed recovery challenge when he should have done better to bypass him.

All in all, this was a golden opportunity missed and one he won’t forget in a hurry. 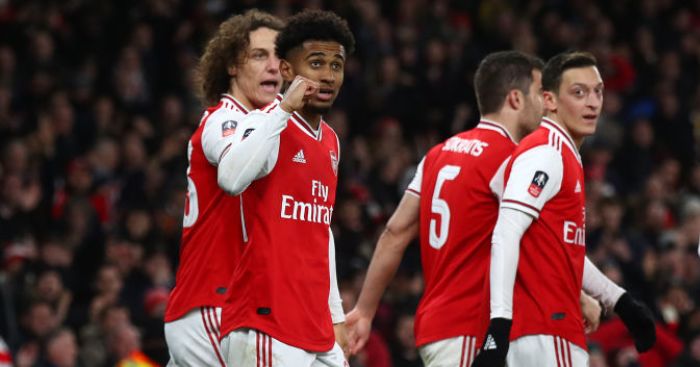 Nelson netted his second goal of the campaign during an energetic, encouraging display

After a frustrating first-half, this was likely to be another of those nights for Reiss Nelson: flashes of his brilliance being overshadowed by disappointing end product – whether that be poor weight of pass, miscommunication between teammates or otherwise.

However, as Arsenal improved after the restart, so did Reiss’ understanding among his creative-minded teammates. He had already been working hard down the left-hand side, making a concerted effort (three tackles, one block, 7/10 duels won) to stop the Jack Harrison – Luke Ayling combination and providing help for his fullback Kolasinac.

Given freedom to drive through midfield and take players on was where he excelled. Completing all four attempted dribbles, he showed his blistering speed to waltz into the box despite pressure after Lacazette’s clever flick-on and seemed determined to return the favour wherever possible.

The pair linked up well and this proved pivotal during the build-up to his opener, even if it was a scruffy finish. Lacazette’s pass – intended for Pepe – deflected to Nelson’s feet and he couldn’t miss from close-range. Judging by their post-match interview, the Frenchman was understandably grateful.

On another night, Reiss would have been credited with at least one assist for Lacazette. He hovered between-the-lines as a supporting option in the final third and can consider himself unfortunate not to have been given a penalty, after shielding the ball away from a defender and being hauled off the ball from Nelson’s clever reverse pass.

His decision-making still needs some work, though that will come with experience and importantly, more first-team minutes. He’s already played more under Ljungberg and Arteta (625 minutes) over the last month than Unai Emery’s reign (320 mins), is hungry to learn so their renewed faith in him can only do wonders for his confidence. Netting a goal here, even against lesser opposition, should stand him in good stead going forward.

Martinez excelled and needed to, against a Leeds attack who threatened all too often

If not for Martinez’s excellent goalkeeping, particularly in the first-half, Arsenal would have easily found themselves three goals behind with a mountain to climb. At 27-years-old, the Argentine has now only made nine appearances across all competitions this term – featuring in all of their Europa League and EFL Cup fixtures.

Nonetheless, he’s continued to develop a reputation as a dependable second-choice goalkeeper which is always convenient for rotation, while he’ll be eager to assert his credentials as a worthy replacement should Bernd Leno lose form at any stage.

After a display like this, recording his fourth clean sheet of the campaign, his efforts are not going unnoticed. Leeds were proactive and immediately took the game to their hosts, with Martinez more busy than he or many watching probably would have expected.

His impressive reflex save to thwart Alioski’s goal-bound header was perhaps the pick of his six stops over the 90 minutes, though it was the calming manner with which he smothered balls and relieved pressure – albeit briefly – upon his defensive teammates that was most telling.

Just like Leno, he’s used to featuring in teams with makeshift or weakened backlines and did himself justice with an accomplished display to help secure their passage into Round Four. It’s a shame he won’t get the credit he deserves though equally refreshing to see someone excel in a secondary role when called upon, as has often been the case for him.