Nahki Wells’ dubious 20th-minute strike was enough for QPR to snatch a hard-fought three points against promotion hopefuls Leeds, who have now lost three successive games and won just one in their last eight across all competitions.

Patrick Bamford missed a second-half penalty after being hauled down by goalkeeper Liam Kelly – the 23-year-old Scotsman made four saves on this occasion, keeping his first clean sheet in west London (10 apps), having arrived from Livingston last summer.

Wells’ winner was clouded by controversy after the 29-year-old forward handled the ball moments before slotting home from close-range, as Eberechi Eze’s free-kick took a wicked deflection off Luke Ayling and fell to his path.

Despite TV replays showing the same, the Championship doesn’t have use of VAR so the goal stood, much to the visitors’ bemusement. It was a messy finish but Rangers earned it, after creating chances galore early on without the finishing touch.

Eze and Bright Osayi-Samuel continued to probe dangerously on opposite flanks, with Leeds players struggling to live with them in transition. If not for last-ditch interceptions by Ben White and Ayling, QPR could have been 2-0 up inside 15 minutes.

But it was Osayi-Samuel again at the forefront, winning the free-kick which QPR broke the deadlock with. Utilising his body to shield the ball, he accelerated forward on another driving run – skipping past three before Pablo Hernandez took evasive action to unceremoniously halt him as he edged closer to goal. 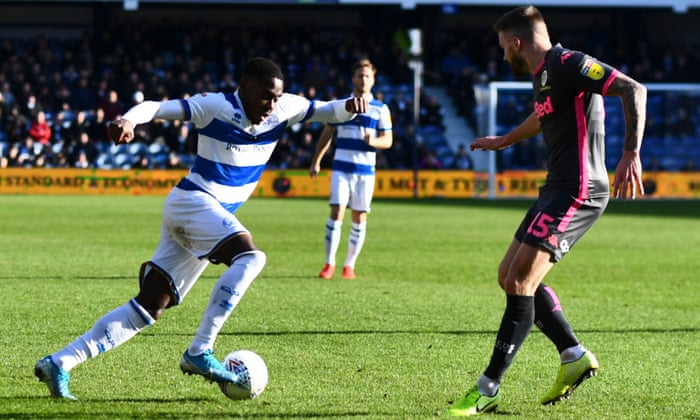 Mateusz Klich did well to create a half-chance on the byline, keeping the ball in play as he fizzed a pass into Bamford – but his eventual effort was parried out for a corner by Kelly, before Helder Costa blazed over from the resulting setpiece.

You could see QPR players visibly gesturing at teammates to get further forward, such was the effectiveness of Leeds’ high-pressing tactic. However, the Whites struggled to utilise their possession dominance properly and their high line also gave Rangers counter-attacking opportunities of their own.

Ilias Chair combined with Eze before firing a crossfield pass into Samuel, who teed up the 22-year-old Belgian with a promising chance in the area but one he fired wide.

For all of Leeds’ quality, they weren’t doing themselves any favours with their distribution in defensive areas. Eze teed up Wells who failed to connect convincingly with another good chance and after 35 minutes, he could have had a first-half hattrick.

Instead, he evoked the loudest Leeds cheer of the afternoon, receiving a booking by referee Peter Bankes for overzealous pressing which caused a needless foul on Hernandez.

A minute earlier, Bamford should have equalised. Kiko Casilla’s booming kick found him open with space to run into, as QPR players frantically backpedalled trying to recover a precarious situation.

Kelly rushed out to close down the angle, but Bamford fired high and wide – missing the target completely. Precisely the type of chance you cannot afford to miss at this level.

Marcelo Bielsa made a wise decision at half-time, replacing Stuart Dallas as the fullback was booked just before half-time – Samuel again causing havoc – with winger Ezgjan Alioski coming on to play in an unorthodox left wing-back position.

Leeds continued creating half-chances, with Costa and Bamford heavily involved as fullback Lee Wallace struggled to cope down the right. However, their hesitancy proved costly as promising moves broke down and you could sense QPR’s belief increase. 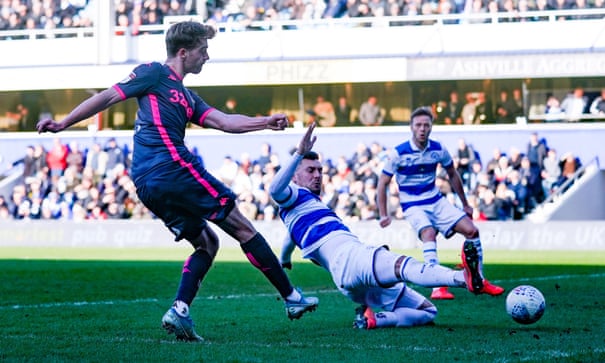 They weren’t perfect by any means, but as time wore on and the Whites continued to squander their openings, they were collectively more enthused.

Then on the hour mark, Leeds finally had their breakthrough. Or so they thought. Ayling released Bamford with a clever defence-splitting pass into the box, he flicked it past Kelly but was brought down by the onrushing ‘keeper.

Despite the goalkeeper’s passionate protests that Bamford had engineered a penalty from minimal contact, the referee didn’t hesitate to point to the spot. He telegraphed it, but Kelly made an important diving stop to his left – keeping his clean sheet intact.

Smothering the danger from a follow-up corner only served to reaffirm his position as QPR’s safe hands, before he was forced into action to deny Kalvin Philips’ speculative effort from distance too.

Osayi-Samuel probably would have won Goal of the Season in mid-January had he finished a chance he very much created on his own – another marauding run going unrewarded after he jinked past four players before the attack fizzled out in an area packed with Leeds players.

Mark Warburton opted for a double change with 15 minutes left, as Amos and Clair were replaced by Scowen and former Leeds winger Jack Clarke (on-loan from Tottenham).

Klich again did well in his attempts to tee up Bamford, whipping a dangerous cross towards the back post. Ultimately, Bamford met the ball too late and headed wide – to ironic jeers from the home supporters.

Wallace – clearly being targeted – committed a cynical but necessary foul on an advancing Costa and was duly booked, gifting Leeds a free-kick in a dangerous area. 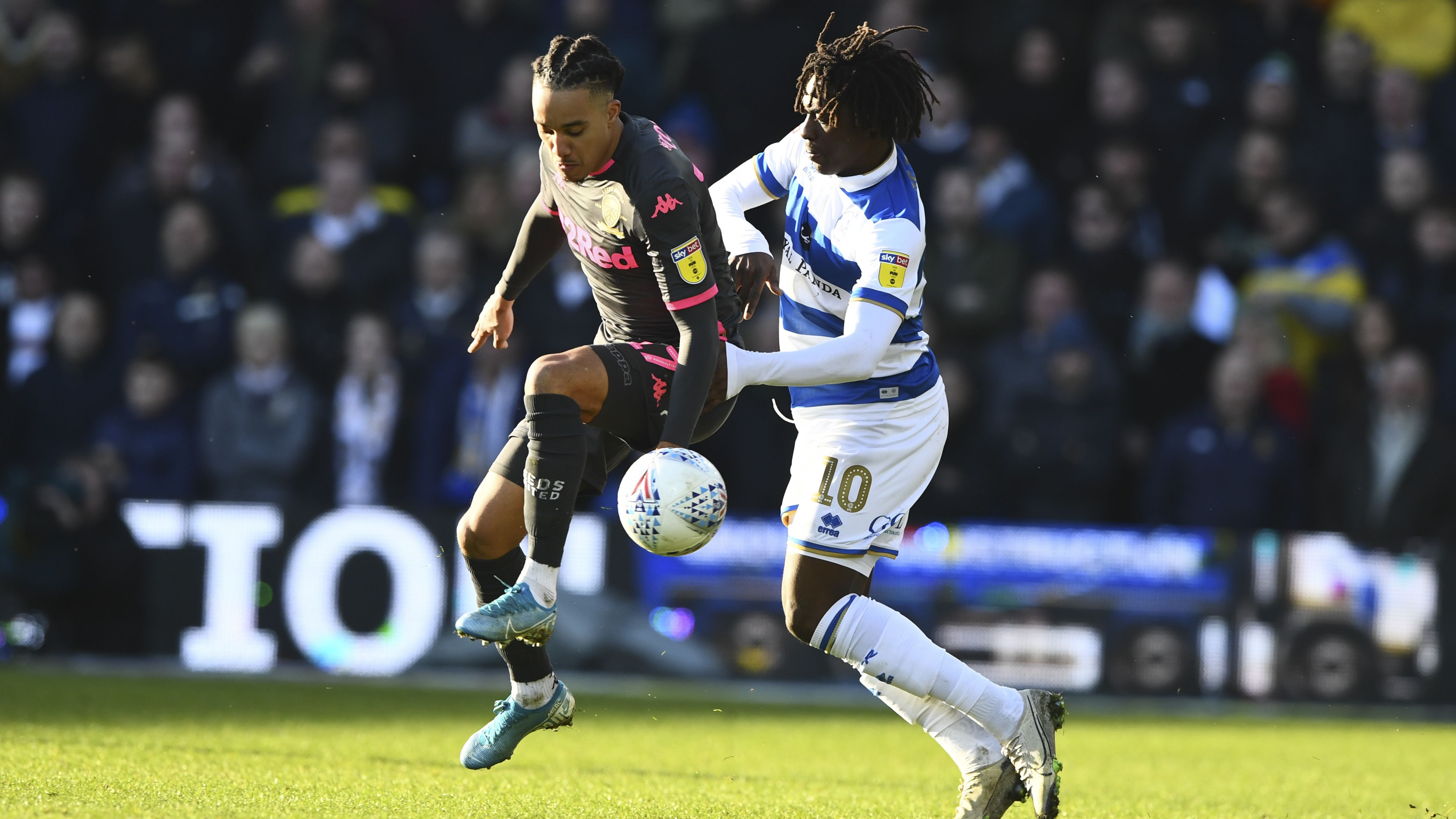 Hernandez, fortunate to still be on the pitch himself, struck the outside of the post with the set-piece as it flashed inches wide of the far post. QPR could breathe again.

Masterson effortlessly dispossessed Costa, before launching a 40-yard run into midfield and winning himself an invaluable freekick to while away more seconds on the clock.

Not to be outdone, Wells missed (another!) half-chance before his number was up and Marc Pugh prepared to replace him. He ignored the referee and Leeds players telling him to speed things up, took his time and if it wasn’t clear by now, QPR were content holding onto their slender advantage.

Klich received a warm reception from the travelling fans as Jordan Stevens replaced him with five minutes plus stoppages to play, but Bielsa’s decision-making with regards to substitutes seemed too little too late. Then, Philips was sent off for a poor challenge. 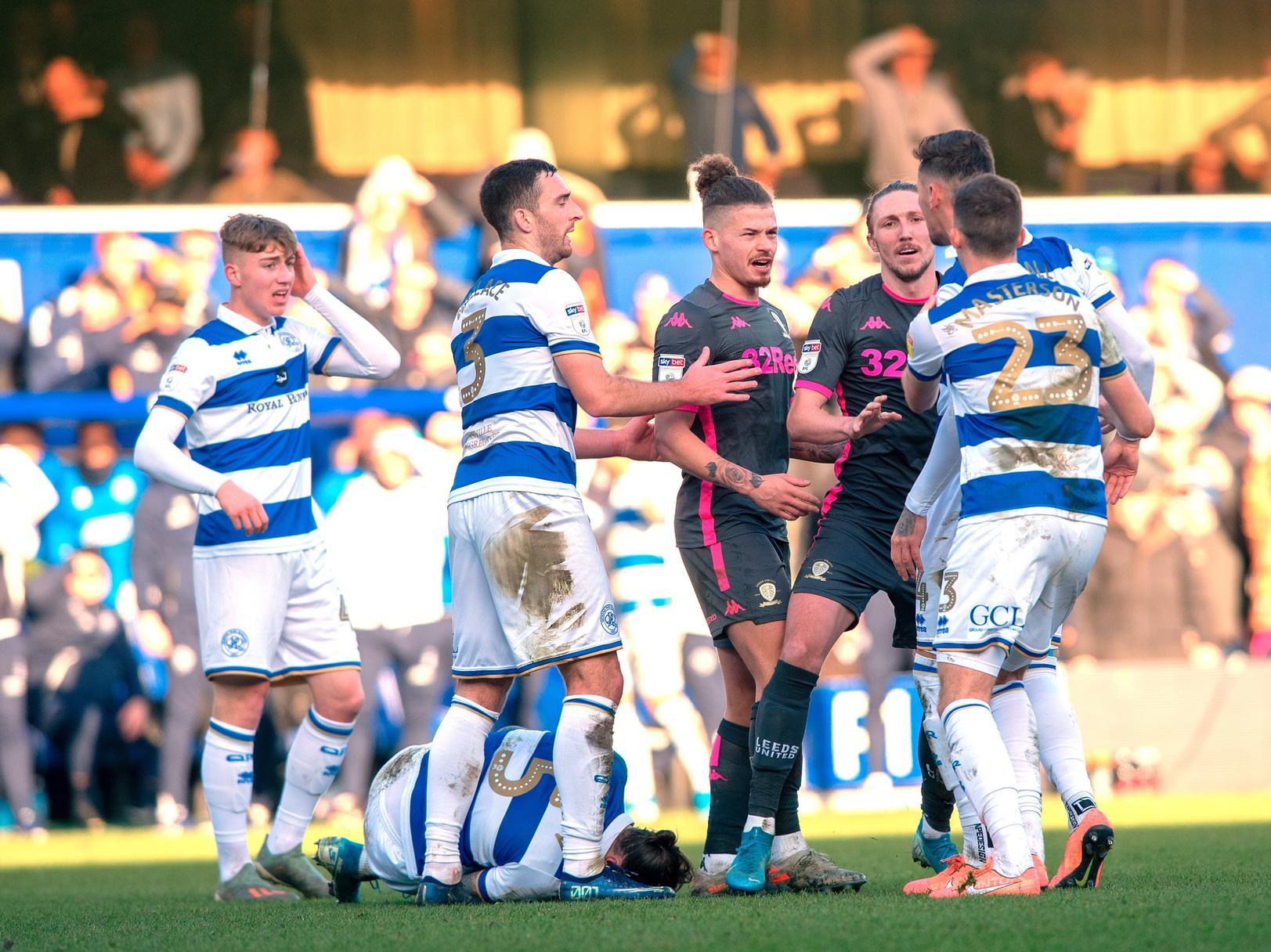 If anything summed up their game in a matter of moments, it was that instance. They lacked urgency in the final third, Philips relinquished possession after taking one touch too many and was frustrated.

He lashed out with a poor sliding tackle on Cameron, duly shown a straight red card and could have no real complaints – while Ayling (dissent) was also booked in the aftermath.

Despite having five stoppage-time minutes to equalise, Leeds limped their way to a forgettable narrow defeat – one they could have easily prevented with more urgency in midfield, better finishing and proactive substitutions.

Despite their poor form, this win means QPR are just six points off Nottingham Forest, who currently occupy the final playoff spot. They will hope they can take this momentum into their next fixture, a home FA Cup tie – Sheffield Wednesday next Friday.

Having been beaten by Arsenal in R3, Leeds have ten days to lick their wounds, before two successive home fixtures in quick succession against Millwall and Wigan. They cannot afford to let their slump continue much further, if they want automatic promotion to the Premier League this summer.