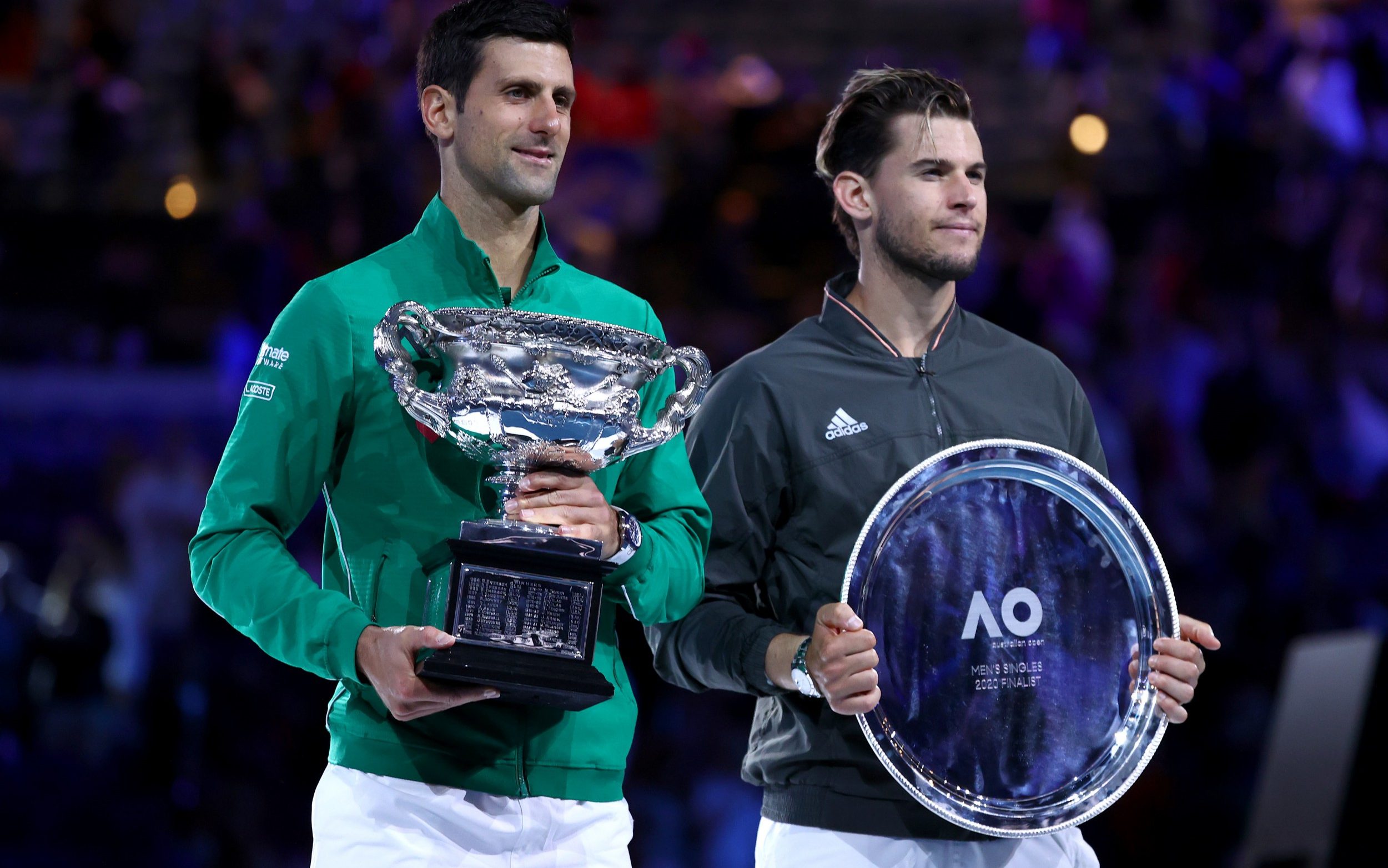 Novak Djokovic recovered from two sets to one down in a Grand Slam Final for the first time in his career (previously 0-7), earning a record-breaking eighth Australian Open title while sealing his 17th GS trophy with a five-set triumph 6-4, 4-6, 2-6, 6-3, 6-4 over a plucky Dominic Thiem – who was so close to his maiden Slam.

At the end of a telling third set, against all the odds, how dare you doubt him? Somehow, someway, Novak managed to recover in a must-win fourth set against Thiem – who looked destined to win his first Slam at the third time of asking.

Djokovic seemed lethargic and wayward while Thiem was energised as confidence seeped through his veins. Much like during November’s ATP Finals, where he and Stefanos Tsitsipas shared the belief one of the NextGen would win a Slam in 2020.

After all, the 26-year-old Austrian had blitzed through a pivotal stage of the second set and raced ahead into the third – winning six successive games along the way.

Given his gruelling 18 hours on court just to get to Sunday’s final – two tense four-set wins over world number one Rafael Nadal and surprise package Alexander Zverev in the quarters and semis, this wasn’t meant to be happening. It certainly was.

Thiem was unplayable at times and won four of their last five meetings, though Novak refused to relent: he too had come too far to lose when it mattered most, either. Djokovic rallied back from a precarious situation, down two sets to one, to prevail in five

Djokovic turns it around at crucial moment

If there were match-defining moments which allowed Novak to seize control again, there are two which stick out from the rest: a lengthy rally that went Djokovic’s way, despite Thiem seemingly being on top – exchanging drop shots before the world number two finished the point beautifully at the net.

Then not too long afterwards, Thiem missed a surefire drop shot winner. It kissed the net and bobbled back his way, another sign that Djokovic was getting his groove back.

All those energy drinks, shakes and dates certainly did their bit as Novak gradually recovered and forced his way into Thiem’s thinking. He knew he had a job to do and executed ruthlessly.

Domi’s misfiring forehand was biting him hard in the deciding set, so much so that despite earning a crucial hold at 3-4 down and winning an exhausting 28-shot rally, he continued to fire forehand errors wide.

Despite dwindling service speeds, Djokovic used it as a weapon – mixing power with gutsy wide efforts to force Thiem into more mistakes. His hard work paid off.

STAT: Djokovic becomes only the second man in history after Ken Rosewall to win a Grand Slam trophy across three decades in 3 hours, 59 minutes

Thiem has now lost in three, four and five sets – this one will undoubtedly sting more than the previous two, especially given how he was just a few games away from his first Slam. Nerves proved too much, all things considered. Funnily enough had he played anyone else in the final but Djokovic, he probably would have snatched it all.

As revealed by tournament officials, a record-breaking 812,000 people attended this year’s tournament over the past fortnight. There was praise for both players while the tennis community collectively raised over $6m dollars to support bushfire relief.

Having spent more time on-court than anyone else over the Grand Slam, he beat Nadal on the way to a heartbreaking five-set Final defeat but Thiem was classy as usual in defeat.

He said: “I would like to start with a huge congrats for Novak, an amazing achievement and also to your team – it’s unreal what you’re doing, throughout all these years – you and two other guys [Federer and Nadal] have brought men’s tennis to another level. I’m proud that I can compete in this period, I fell a little short tonight but hopefully soon I can get my revenge.

We all saw, before and during the tournament, there are way more important things in life and it’s very tough what this beautiful country is going through so the Australian Open was a great distraction but Australia – amazing and beautiful with the wildlife and people affected, we can only hope a disaster like this never happens again.

I experienced such huge support over these two weeks, thanks to everyone who came, it’s one of the best events across all sports and an absolute pleasure to be here… thank you to everyone who comes to support us and makes this all possible.”

Djokovic meanwhile, was similarly reflective on what has been a difficult start to 2020 – even in victory:

“I would like to start by saying congratulations to Dominic for a great tournament. It wasn’t meant to be tonight, you were very close and have a lot more time to get Grand Slams in future, much more than one… Also thanks to your team, I appreciate you guys and wish you good luck. I’d like to thank my team, my brother came all the way here for some quality family time, I really appreciate that.

There were some devastating things that started 2020: conflicts across the world, bushfires here, people dying everyday. There was one person who I consider close to me who passed – Kobe Bryant and his daughter.

This is a reminder that we should stick together more than ever now, be with our families, stay close to the people that love and care about you, we are part of a professional sport but there are obviously more important things, so it’s important to be conscious about things happening around you..

I would like to thank all the people who came once again, every single day over the past two weeks – whether it was singles, doubles, mixed doubles, wheelchair, the ball kids, ball girls, ball boys, there are so many people we just don’t have all night to thank. This is my favourite court, this tournament sets a high standard for all of those across the world. I’m blessed to hold this trophy once again, thank you very much.”