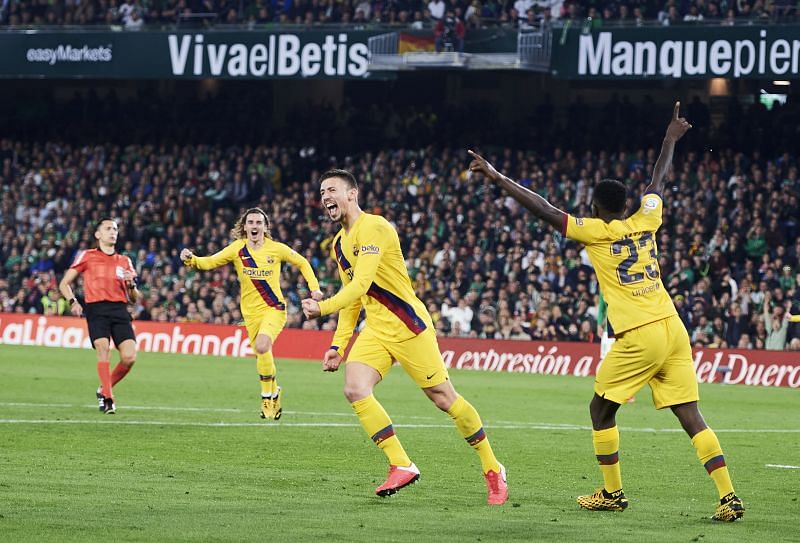 Goals from Frenkie de Jong, Sergio Busquets and Clement Lenglet were narrowly enough as Barcelona recovered from a goal down twice and battled through adversity to snatch all three points against a spirited Betis display on Sunday.

The result means Barca avoid dropping yet more points in this season’s La Liga title race, having relinquished their slender lead to rivals Real Madrid on MD21. During one of the day’s earlier games, Real were 4-1 winners away against Osasuna – extending their 14-match unbeaten run in Spain’s top-flight.

So you could excuse the sharp intake of breath when Quique Setien’s side went behind on two separate occasions in the first-half against a bold, bullish Betis team unafraid of their visitors.

Lenglet was booked after five minutes, with VAR review awarding a penalty as the Frenchman handled compatriot Nabil Fekir’s goal-bound effort. Canales converted the resulting spot-kick to break the deadlock, sending Marc-Andre ter Stegen the wrong way to make it 1-0.

Their lead lasted all of four minutes, as Lionel Messi and de Jong combined for a well-worked equaliser to stun the raucous Benito Villamarín Stadium into silence.

Fekir – who ran the show in the first-half – took full advantage after Arturo Vidal’s costly mistake near the halfway line to fire Betis back in-front after 26 minutes. Guido Rodriguez retrieved possession, they broke at speed before the 26-year-old evaded oncoming Barca defenders to pick his spot, slotting into the bottom corner.

Lenglet and fullback Nelson Semedo came close with promising chances, but were denied by some important last-ditch Betis defending, before Busquets netted his second league goal of the campaign in first-half stoppage-time.

The hosts felt aggrieved after the controversial way in which they conceded, as players – particularly Lenglet – were getting handsy in the box, but the referee waved away their protests and the experienced Spaniard’s goal stood.

Messi forced a handful of big saves from Joel Robles, while seeing a delicate chip flash narrowly wide of his far post as Barca increased their intensity to start the second-half. So perhaps it was no surprise to see Lenglet rise brilliantly over Rodriguez and guide Messi’s free-kick into the far corner, leaving an off-balance Robles with no chance.

Both he and Fekir were given their marching orders for separate incidents in the final 15 minutes: the creative midfielder dismissed for a needless foul and consequent verbal abuse, before Lenglet himself could have no complaints after committing a clumsy foul on substitute Joaquin three minutes later.

Busquets dropped deep in the latter stages to combat Betis’ waves of attacking pressure, though Barca importantly managed to hold firm for all three points. Without further ado, here’s a look at five hits and flops from a Match of the Season contender… 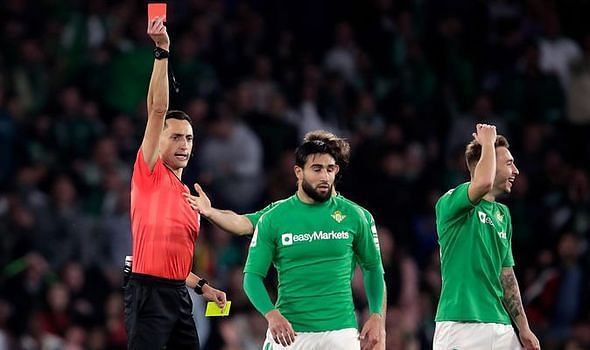 Despite such a promising start, Fekir was needlessly sent off in the second-half to ruin a memorable display

Well, talk about a tale of two halves. Nabil Fekir was brilliant in the first-half: took his goal well, was playing with utmost confidence – delivering rabona crosses, darting past Barca players and causing general havoc in transition.

In the second-half, it was a completely different story. He and most of his teammates faded as Barca settled and were creating more chances while taking better care in possession too. It meant their opportunities were increasingly sparse and when they came, were no longer as clear-cut or promising as the first few which boosted their spirits in the first-half.

Frustrated by the situation, seeing his side’s lead slip away on multiple occasions, he tried to latch onto a loose pass but instead was rightly penalised for committing an overzealous challenge on Lenglet. Referee José María Sánchez booked him and he could have no complaints, because even if you describe it as a ‘soft foul’ to give away, it was his own doing.

Rather than take that booking and trudge off back into position, he made a grave error. Arguing with the referee and verbally abusing him too, despite being warned against doing so as he reacted angrily to the initial booking.

Judging by his teammates’ reaction in the immediate aftermath, they could sense the match was starting to get away from them and Fekir’s dismissal would only serve to sap more of their energy. After all, he was one of their best performers on the evening. What made the situation worse was the fact this had all been self-inflicted.

Despite introducing Barca academy graduate Cristian Tello late on, Betis lacked the creative spark needed to snatch a point from this game – one they might have won – and Fekir will regret his petulance, which was the exclamation point on how such a promising evening ended in him being sent off as Betis succumbed to their ninth league defeat of the season. 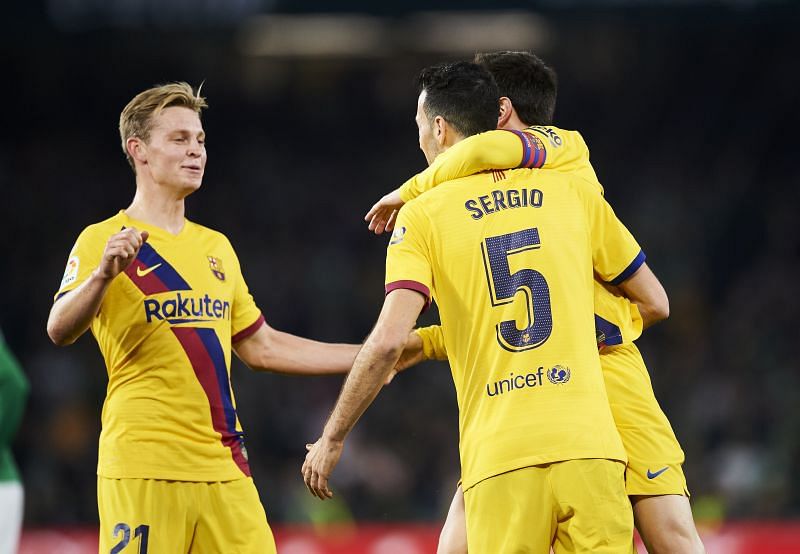 It was a solid evening for Sergio Busquets, who took his goal well and combined with de Jong to good effect after getting settled midway through the first-half.

Importantly, it allowed him freedom to do what he does best: control the game’s tempo – something made obvious after the break – while both assured and reliable in possession.

While Sergi Roberto looked overwhelmed at times and Vidal struggled under pressure, he was the opposite. He completed 6/7 attempted long balls, recorded 90% pass accuracy and showed ice-cool composure in a nervy sequence of events leading up to Barca’s second equaliser – controlling Messi’s freekick brilliantly before firing home from close-range.

It seemed inevitable he’d get booked at some stage – having committed four fouls – but also completed four tackles, one clearance and block over the 90 minutes as Setien’s men were forced into plenty of defensive duties in frenzied bursts under pressure. There have been times where he’s been indifferent this season, sluggish or lacked urgency. On this occasion, his presence was undeniably felt. 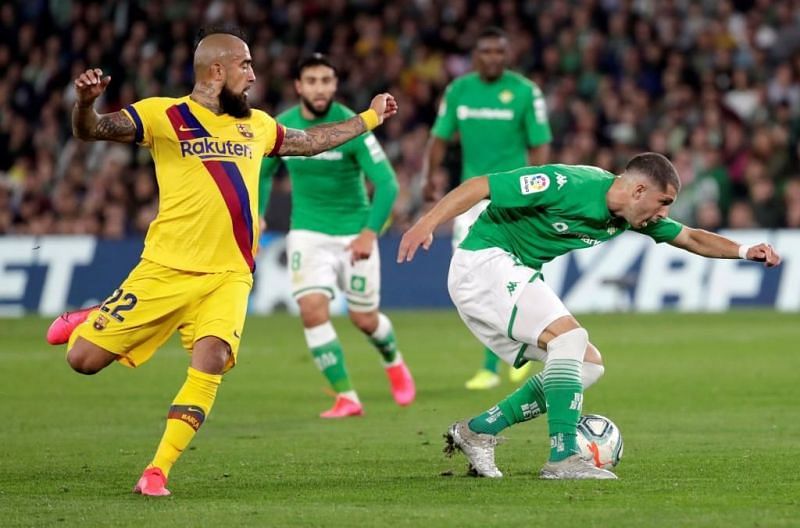 Vidal was severely off-the-pace and struggled against Betis, gifting Fekir his goal before half-time

Arturo Vidal looked sluggish and failed to overcome a disappointing start to proceedings on this occasion – something which threatened to affect the rest of his teammates, especially Sergi Roberto and Junior Firpo early on.

At fault for Fekir’s goal, he relinquished possession too easily and looked like a deer in headlights as the hosts countered them brilliantly to score seconds later.

He was booked for a poor tackle on the goalscorer just after the half-hour mark, exuded nerves and it seemed inevitable that he would be replaced at some stage with Setien scanning his threadbare substitutes’ bench for other options to provide fresh impetus.

Unsurprisingly hooked just before the hour mark and truthfully, it was more eye-opening he didn’t come off sooner. He gifted Betis momentum and granted them a psychological edge in midfield that de Jong-Busquets had to take turns chopping away at. A more creative-minded Ivan Rakitic, a late substitute himself here, will have been watching with a keen eye. 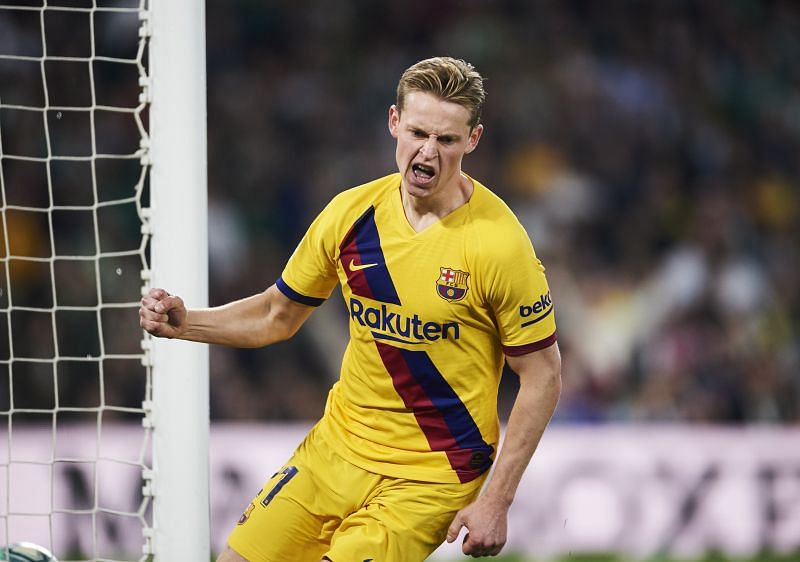 As for Frenkie de Jong, this was a memorable display by the Dutchman. He started and finished the move for their early equaliser after Messi’s brilliant through ball, setting the tone as Barca didn’t initially trail for long.

His close-range finish helped to build the requisite confidence needed to continue in that vein, pairing combination play with defence-splitting passes while utilising width more effectively as time wore on.

He personally was excellent in possession, confident and assertive on both ends of the pitch – juggling his responsibilities well. That’s not always the case, particularly in tricky away games like these where he can often go missing at times.

It would have been easy for him to get frustrated, such was Betis’ purposeful start and Barca’s sluggish midfield play – Vidal and Roberto – lagging behind enough to boost their momentum further. Instead though, he knuckled down and orchestrated moves from a variety of different positions. Betis couldn’t live with him.

He won 8 of 14 duels contested, had 90.4% pass success, two interceptions, one tackle, was fouled on five separate occasions and netted a timely equaliser for his first goal since September. After an inconsistent start to 2020, the 22-year-old will hope he can build on this. 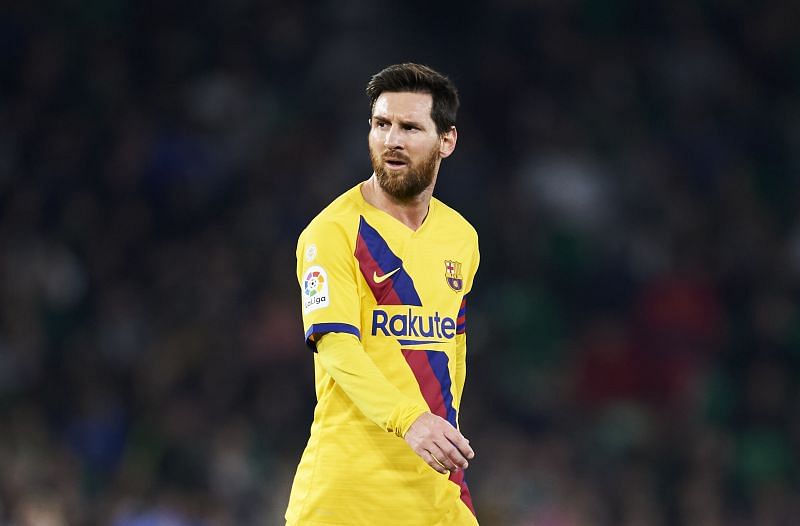 Joel Robles made two big second-half saves to thwart him as he skipped past Betis defenders in the area, before having a genuine penalty appeal ignored by the referee in stoppage-time – having been manhandled by Marc Bartra. His assists were more of the same: perfectly weighted passes for teammates, who showed good anticipation, positioning and made no mistake in three different positions.

The first, he combined with an advancing de Jong before delivering an over-the-top pass which split the ball-watching Betis backline. Touch, control, finish. The second was a free-kick, though an unlikely source in Busquets was on hand to apply the finishing touch. The third and winning goal though, was both emphatic and unforgiving. Lenglet towered above his marker, left him in a heap on the turf as he headed home into the far corner.

As usual, Messi was a nuisance for the opposition to live with. He won 8 of 13 duels, completed game-highs in successful dribbles (6) and key passes (6), subtly orchestrating attacks as he always does. The icing on the cake for this performance would have been a goal – not for lack of trying – but judging by his celebration when VAR ruled Lenglet’s finish a goal, grinding out a hard-fought win was more important.

You could see him remonstrating with officials immediately post-match and had a point with his passionate protest. After all, the hosts were far from subtle in their attempts to frustrate him and other teammates as they advanced towards goal. This was a physical game with fouls aplenty, so perhaps the officials felt it was necessary to let things play out.

They shouldn’t have because they were allowing the behaviour to continue – shirt-pulling, pushing, no attempt to play the ball – and rather than stamp it out, the dark arts of defending was indirectly being encouraged. Nonetheless, it speaks volumes that their collective efforts still were not enough to stop Messi from winning the game and he didn’t even need to score.