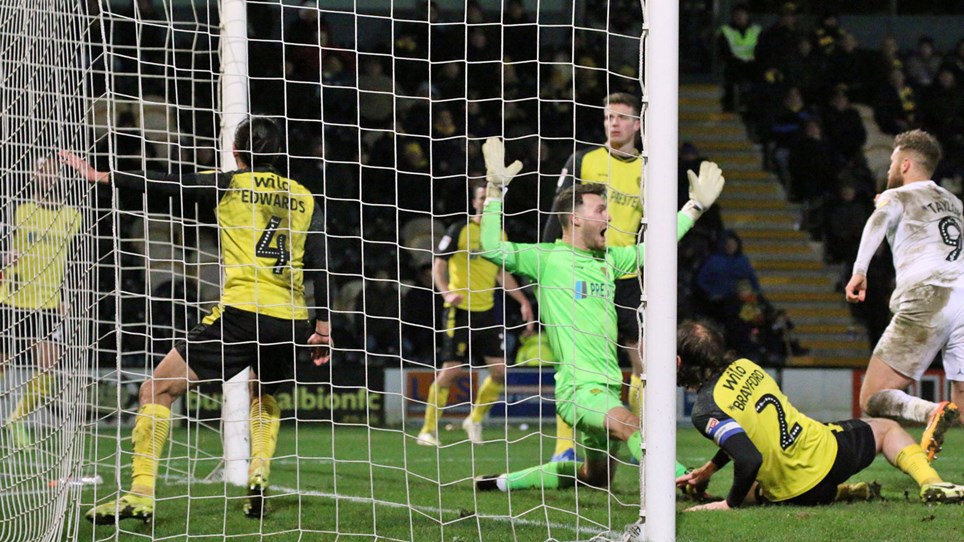 A scrappy stoppage-time equaliser courtesy of Oxford United striker Matty Taylor – his second goal of 2020 – proved a timely blow as the Yellows snatched a point at the death, though both sides dropped two in their respective push for promotion.

During a frustrating watch on a bitingly cold evening at the Pirelli Stadium, the 29-year-old was booked for simulation in first-half stoppage-time. As his marauding run through midfield had been abruptly cut short, he fell to ground and referee Stephen Martin took one look at him before awarding a free-kick in the hosts’ favour. Ironic jeers followed.

That typified his game, and most of his teammates, to that point. Oxford were easily the better side, enjoyed possession aplenty with promising chances too yet failed to test Kieran O’Hara much while making it too easy for their backline to sweep up any danger.

Yet they were a goal down and chasing the game, down to their own lax defending. Burton’s Lucas Akins didn’t mind: taking full advantage of the visitors’ sloppiness after the restart as midfielder Liam Kelly limped off after 20 minutes – Ryan Edwards teed him up, before his effort took a final touch off Rob Dickie to deny him his 10th goal this term. 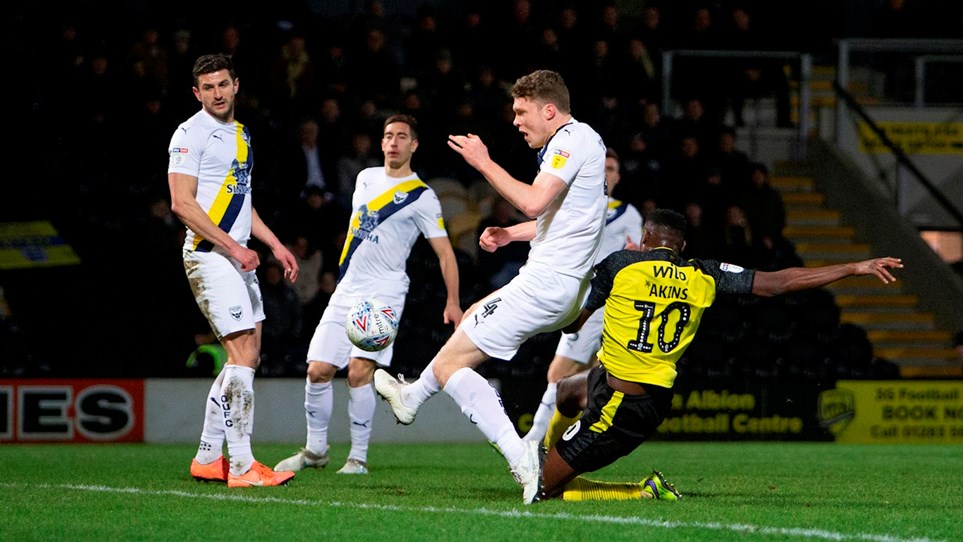 Akins made it 1-0 with a scruffy close-range finish, as Burton caught their visitors off-guard

Little did Taylor know that over an hour later, he’d be Oxford’s hero with his seventh strike of the season to earn a deserved reward for their tireless endeavours – emerging a team inspired after the interval. Those same jeers turned to angry groans, disbelief and a sinking feeling among the hosts – relinquishing their lead twice.

Just a minute after his introduction, 22-year-old forward Daniel Agyei equalised for the visitors. Taylor’s clever pass set him through on-goal and just like Akins earlier on, it wasn’t the most beautiful goal – O’Hara got fingertips to the effort but it still trickled in – but nonetheless one that had been coming, such was their second-half dominance. 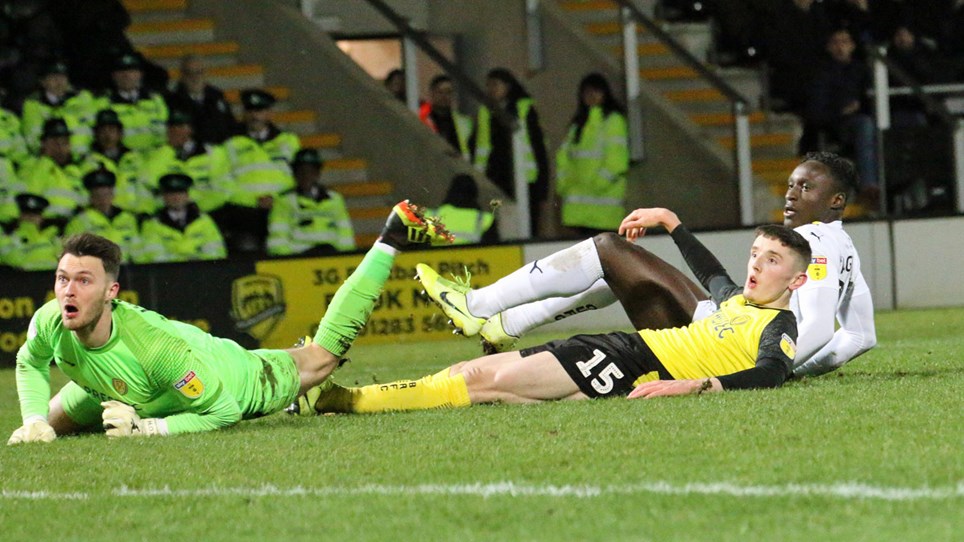 Agyei made an instant impact for Oxford, who were good value for their goal

With the hosts pinned back in their half too much for comfort, an equaliser seemed inevitable. Conceding the second though, was far worse.

Jamie Murphy, on-loan from Rangers, scored his third goal in five games with a brilliant solo effort to see them retake their slender lead after 71 minutes – one set up by Conor Shaughnessy’s fantastic pass out of defence. 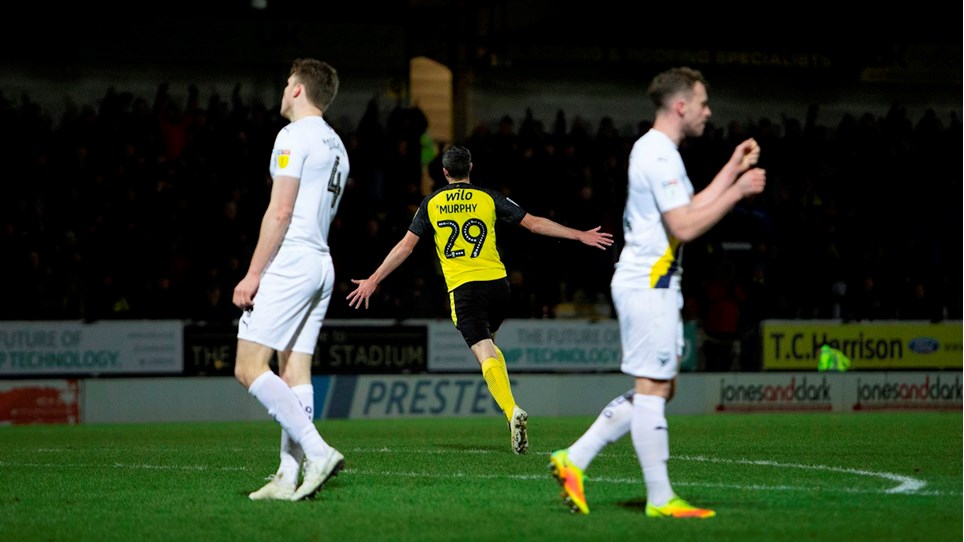 Murphy celebrates his strike, having sidestepped two before slamming into the bottom corner

With an advantage to protect, Nigel Clough’s men failed to maintain composure under pressure. Poor in possession, baffling decision-making and hesitancy invited more intensity from the visitors. They could smell blood, this game was still there for the taking.

O’Hara punched a corner partially clear, but sub Alex Gorrin advanced down the byline and evaded Richard Nartey before fizzing the ball into a dangerous area. Rob Dickie’s goalbound shot was converted by Taylor, who was in the right place to slam home.

Just like that, all of Burton’s hard work was undone. Their winless run extends to five matches, while also losing ground on their playoff-chasing rivals – Gillingham’s last-gasp winner against Blackpool saw them leapfrog the Brewers into 11th. They face away trips to 7th-placed Ipswich and strugglers Southend between now and next weekend.

Oxford meanwhile, only have one win in their last eight games across all competitions. Not exactly the type of form that screams promotion, is it? They host Sunderland, then AFC Wimbledon three days later as fixtures come thick-and-fast over the coming weeks.

Just looking over my notes from the 90 minutes, the amount of times I picked out Nartey as the hosts’ standout defender is ridiculous. 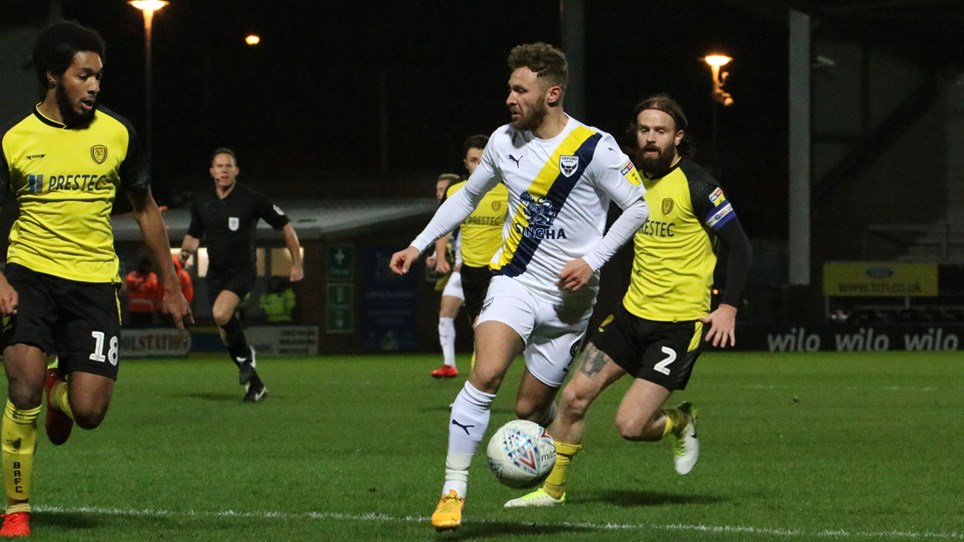 His match stats speak for themselves: eight clearances, two blocked shots, four tackles completed – many of them had to be inch-perfect in the area but he did exactly that.

Currently on-loan from Chelsea, the centre-back’s existing deal there is said to expire this summer and it’s unlikely he’ll want to return to U23 football after a productive loan spell such as this one.

Assertive displays like this suggest he could be playing in the Championship next season, where he’ll look to emulate Fikayo Tomori et al who have flourished in the second tier.

Although you could tell he’s a Premier League academy player, his distribution was disappointing and there’s still scope for improvement – evidenced by the part he played in Oxford’s last-gasp equaliser.

As I said on the final whistle, this was a weird game. Burton lost two points late on but easily could have gone home with nothing. Karl Robinson’s side created chances but only made them count once they had a deficit to overturn. Frustrating isn’t quite the word.