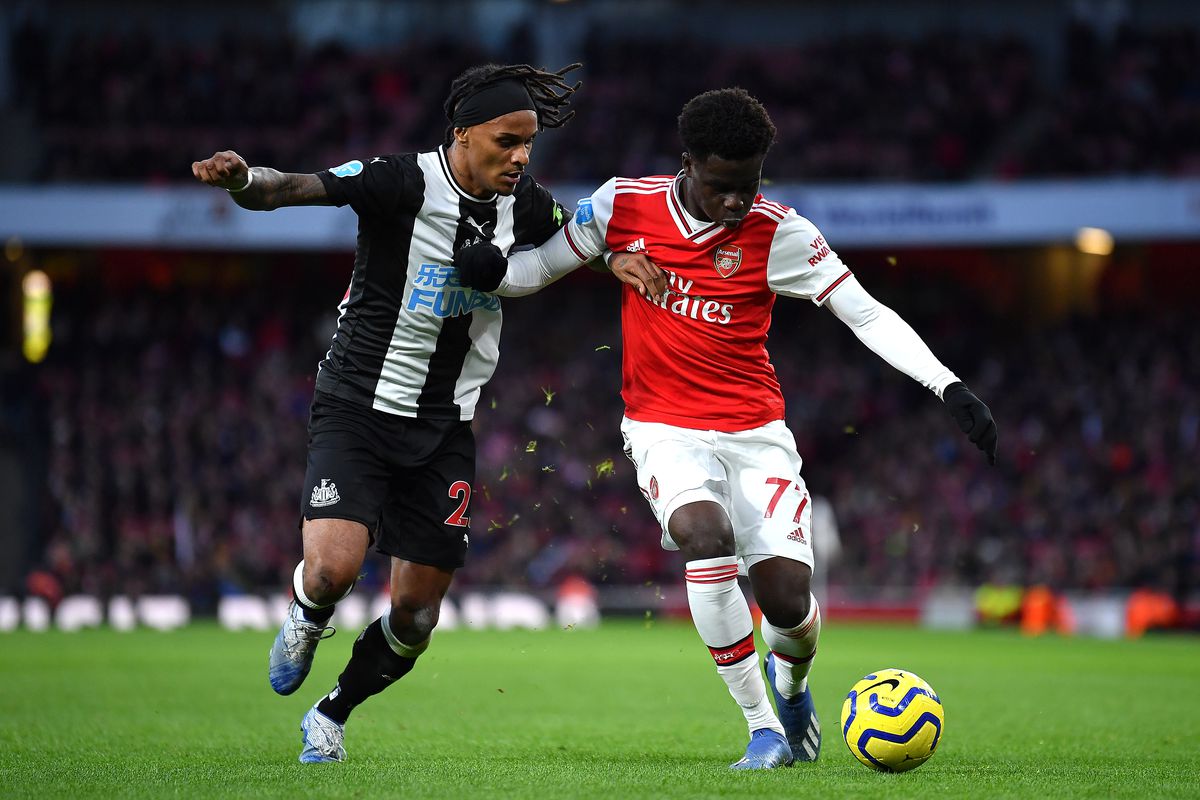 After an excellent display against Newcastle yesterday, Arsenal will hold talks this week with breakthrough teenager Bukayo Saka over a new five-year deal – with the winger’s existing contract expiring next summer and interested clubs set to circle.

Saka, who turned 18 last September, has made 24 appearances across all competitions for the Gunners this term – totalling over 1,500 minutes.

He excelled during their 1-1 draw at Manchester United that month, creating the assist for Pierre-Emerick Aubameyang’s equaliser while proving one of the visitors’ ever-present threats in an otherwise drab affair at Old Trafford.

However, he perhaps reserved his best Premier League display for Arsenal’s 4-0 win over Newcastle on Sunday: creating a brilliant assist and winning duels galore as they kept their second successive clean sheet.

Injuries have shifted him into more defensive territory

Having impressed in flashes among England’s top-flight this season, he’s had to balance his creative tendencies with more defensive responsibilities as injuries to key personnel saw him shift into a left-back berth.

Sead Kolasinac has struggled with niggling injuries of late, while summer acquisition Kieran Tierney is nearing a comeback after sustaining a serious shoulder injury during their Decemer win over West Ham. 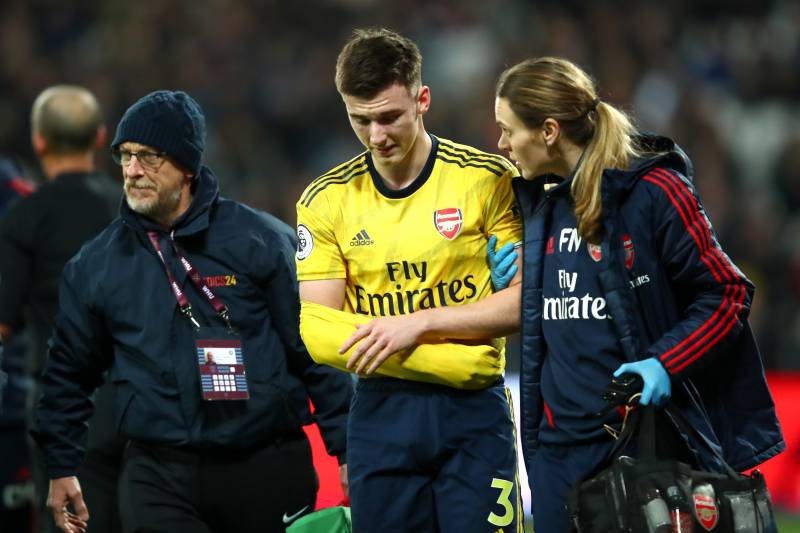 Saka, a left-sided winger by trade, has had to adapt accordingly. Although his youthful exuberance and impressive turn of pace are helpful attributes to have, there have been times where his lack of physicality and defensive nous are taken advantage of – especially against savvy attackers who know he’s better placed to a more forward role.

Their 2-1 home defeat by Chelsea is a good example, though these flaws are understandable and not a concern given his rapid progression and eagerness to learn. The 18-year-old has already been tipped for a shock call-up to Gareth Southgate’s England squad at some stage. That’s how well he has been playing in recent months.

Also eligible to play for Ghana through his parents, he’s likely to take inspiration from the likes of Chelsea trio Fikayo Tomori, Tammy Abraham (both Nigeria) and Callum Hudson-Odoi (Ghana) – they all chose England on the competitive scene.

After all, he’s already got 28 international caps to his name at youth level – under-16 to under-19s, where he last played before Christmas.

Contract talks a priority for Arsenal with interest from elsewhere

It’s entirely plausible he would seek guarantees that in future he’ll be granted more opportunities to feature in his preferred left-wing position – having played a starring role there vs Eintracht Frankfurt in the Europa League group stages before Christmas.

He was certainly the matchwinner on MD1: netting one and creating two in a tricky away fixture. Then he scored one and assisted another on MD6, against Standard Liege.

However, this impressive form has not gone unnoticed. With 18 months left on his existing £3,000-a-week deal in north London, other top clubs are tracking the youngster and preparing to swoop in on the situation should they not come to an agreement. 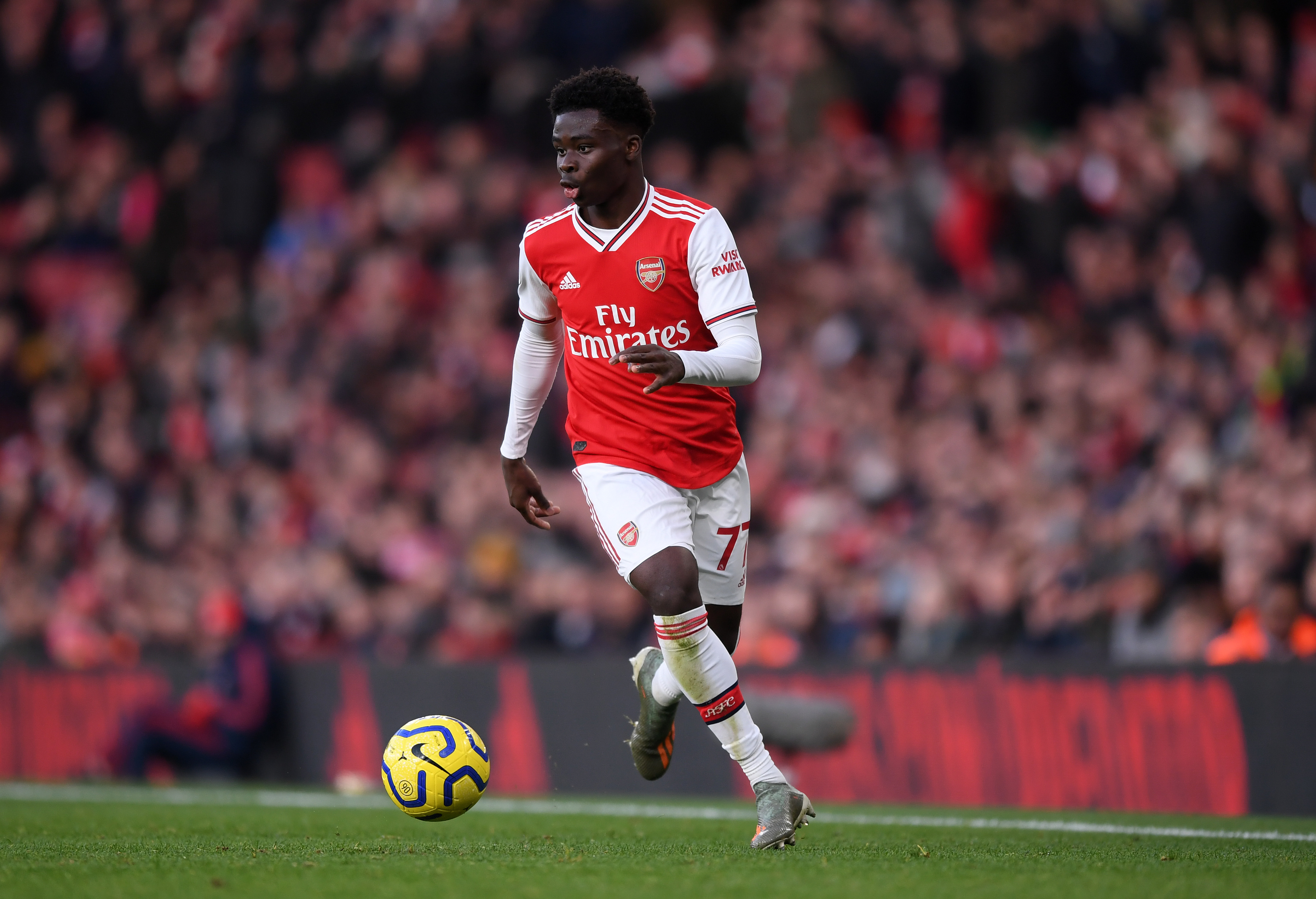 Saka, a left-sided winger by trade, has adapted to playing more defensively and impressed

European champions Liverpool, Bundesliga giants Bayern Munich and Manchester United are all said to be seriously interested – though The Athletic claim talks are underway to secure his future, with a five-year contract tabled.

On whether he could be a long-term option at left-back, Mikel Arteta said last month:

“I think he could [have a future there] because he’s willing to learn, applying himself big time and is someone that’s never played [that position] before, but is really trying to do it as well as possible.

You can see that he’s got many strengths to play in that position. Obviously he needs games, experience and to improve in some areas but that’s very good.

Arsenal next travel to Greece to face Olympiacos in the first leg of their last-32 Europa League tie this coming Thursday and Saka is expected to be part of the travelling squad.