Goals from Gabriel Jesus and Kevin de Bruyne cancelled out Isco’s opener, as Manchester City delivered a second-half fightback to beat Real Madrid and return home with a slender but important advantage ahead of the UCL last-16 second leg at the Ethiad on March 17.

At the fifth time of asking, City have finally beaten Real and this represents a vital victory at a critical juncture in their campaign. They face Aston Villa in the League Cup Final this weekend and given the ongoing suspension dispute with UEFA, the Citizens desperately needed a show of defiance with important fixtures between now and May.

There were some eyebrows raised an hour before kick-off, as Pep Guardiola named a starting eleven far from his strongest one at the Bernabeu. It was clear he had one thing on his mind: keep a clean sheet and hunt for an away goal.

Fernandinho, David Silva, Raheem Sterling and Sergio Aguero were all among a very strong substitutes’ bench for the visitors – while Zidane left Toni Kroos’ wealth of experience on the bench, alongside Marcelo, Gareth Bale and others. Real enjoyed possession aplenty but were largely ponderous in more dangerous areas, besides energy bursts from Vinicius Jr.

de Bruyne combined well with Jesus in transition, as the pair exchanged key passes to create promising chances: Jesus forcing Thibaut Courtois into an important save early on, before de Bruyne flashed a snapshot wide of his compatriot’s far post.

Los Blancos’ first and only true first-half opportunity fell the way of Karim Benzema, who reacted quickest to Ferland Mendy’s cross and prompted a brilliant stop from Ederson. There was an unwelcome injury blow for City, as key centre-back Aymeric Laporte (muscle) limped off after the half-hour mark and was replaced by Fernandinho.

You could only begin to wonder how the Frenchman was feeling, after watching the manner in which his teammates went behind on the hour mark. Courtois made two big saves in quick succession to deny Mahrez, before Nicolas Otamendi and Rodri exchanged hospital passes in a dangerous area and possession was relinquished. Vinicius sped past Kyle Walker before feeding through Isco, who remained composed before slotting into the bottom corner.

Real sensed blood and created a few dangerous attacks as the match became more stretched, though Sterling and Bale were introduced in the final 15 minutes – with varying degrees of success. de Bruyne and Jesus combined once more, this time for the equaliser as the Brazilian shrugged off a backpedalling Sergio Ramos in the box to head past Courtois.

Two minutes later, referee Daniele Orsato awarded the visitors a penalty. Sterling advanced beyond Dani Carvajal, who slid in late and could have no complaints about the decision. de Bruyne stepped up and sent Courtois the wrong way to seal the comeback with aplomb.

Ramos was sent off, for the 26th time in his career, late on as City pushed for another. As Jesus found himself through on-goal, the centre-back committed a subtle but clear foul and being the last man, had clearly denied a goalscoring opportunity. Without further ado though, here’s a look at five hits and flops from a memorable encounter at the Bernabeu:

Carvajal struggled on a night where his concentration, discipline and defensive abilities were needed most

This was a 90-minute spell that Daniel Carvajal will certainly want back, such was his frustratingly poor defensive display on this occasion.

Only Casemiro and Ederson had worse pass success percentages than his 76.6% over the 90 minutes, while he was dribbled past on three occasions – the same amount of blocks he completed. Uncomfortable and despite not receiving adequate support from teammates as the match wore on, that was still no excuse for the Spaniard’s involvement in City’s winner.

Raheem Sterling’s introduction with 15 minutes to play proved a game-changer for Pep, as the Englishman – fresh from recent hamstring trouble – raced forward with purpose at every possible turn. Carvajal, who was already struggling, couldn’t live with him.

Rather than stay on his feet, give away a corner or attempt to block Sterling’s movement altogether, the Spaniard opted for a sliding challenge. When you commit to that, it needs to be inch-perfect to avoid any doubts about whether you got the ball, the man or otherwise.

That wasn’t the case for Carvajal, who mistimed his challenge, hauled Sterling to ground before pointing at the ball as if to say, ‘look ref, I played the ball!’. Nonetheless, his protests were futile, replays confirmed the same and Real’s questionable defending under pressure now leaves them with a deficit to overturn next month. 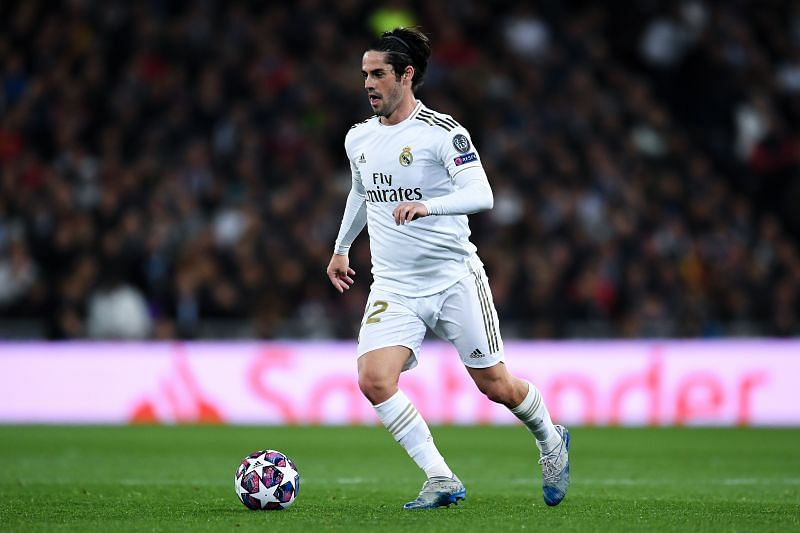 Many questioned his selection pre-match, but Isco again silenced his critics with a solid display and goal

Commentators were confused by Isco’s inclusion over Gareth Bale in Zidane’s starting eleven, particularly in the early going as Real failed to truly test the City backline – barring a few energetic bursts from Vinicius Jr down the left-hand side.

But if you watched the game and didn’t focus on the commentators’ bemusement, a pattern was emerging they rarely acknowledged. Isco and Vinicius Jr combined a lot of the time down that side of the pitch, so while the teenage winger proved a handful for Kyle Walker, his older midfield teammate provided the brains and incisiveness behind their intricate moves.

He retained possession well (86.7% pass success, 39 completed), was his usual press-resistant self (won six of seven ground duels) and made City midfielders look awkward and silly at times that you wouldn’t expect from say, Fernandinho. He was helpless watching on, resigned to the centre-back role he has adapted himself to play over the past twelve months.

Disciplined tactically, much more involved than his midfield counterparts in a defensive-minded Federico Valverde and a largely quiet Luka Modric, Zidane was said to be preparing a change on the touchline. Then without warning, Isco broke the deadlock.

The goal was self-inflicted by City, but they still presented a chance that could have easily been squandered from the hosts. With that in mind, it should come as no surprise that Vinicius-Isco combined again, after Modric harried them off-the-ball. He took a touch to control before firing into the bottom corner, leaving an onrushing Ederson with no chance. 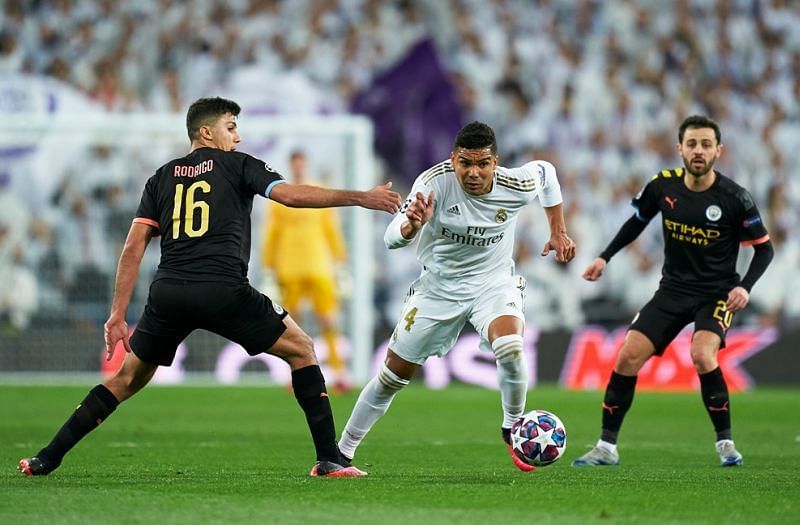 Casemiro was wasteful in possession, made mistakes aplenty and provided insufficient defensive support

Casemiro has long been lauded as Real’s midfield protector, an ever-present defensive figure who surpassed expectations and is one of the first names on the team sheet.

But on this occasion, he flattered to deceive against a City midfield that were there for the taking. Rodri, just like the Brazilian, is defensive-minded and didn’t enjoy his finest game while Ilkay Gundogan has been inconsistent all season to date.

For Jesus’ goal, he is caught ball-watching. Initially out of shot, he quickly tries to atone for his slow reactions by harrying Sterling out of possession, but gets there too late and instead such lax positioning allows an unmarked de Bruyne space to roam into the box.

Although de Bruyne’s penalty was a direct result of Carvajal’s poor challenge, again Casemiro should have done better to protect his fullback. Rodri fed a pass into de Bruyne that could have been cut out with a timely interception but instead, as was often the case here, the 28-year-old watched on and ambled towards the area.

Then to add further insult to injury, it was his poor backpass that presented immediate trouble for Ramos late on and caused the club captain’s dismissal – he was frantically trying to cover his teammates’ mistake in possesion and hauled Jesus to the ground just outside the box.

He lost possession a whopping 17 times over the 90 minutes, which is simply not good enough for anyone, let alone a ball-winning midfielder who was making mistakes aplenty, with many of them needless – like his miscued backheel which almost presented Mahrez a goal in the second-half. 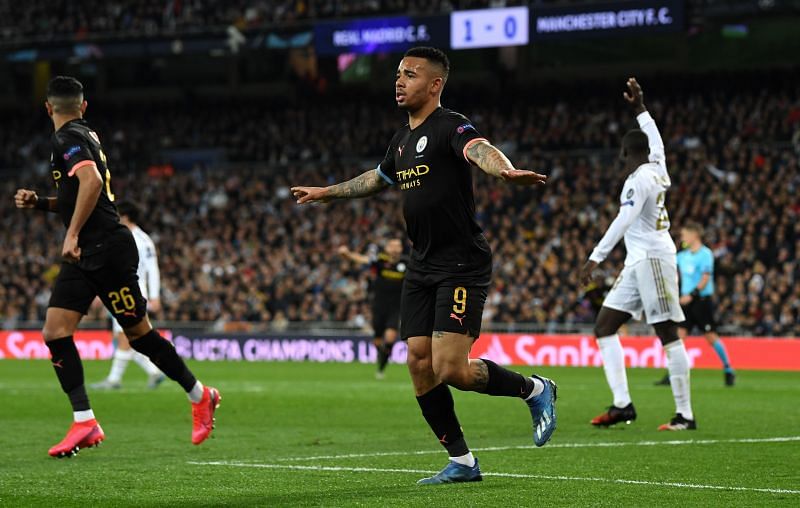 As previously mentioned, eyebrows were raised at Sergio Aguero’s omission from the starting eleven here. After his winner against Leicester on Saturday, Pep trusted Jesus and he stepped up to the plate in a big way – evidenced by his tireless showing from minute one.

He was everywhere: speeding back frantically to chase down loose balls, crashing into advertising hoardings after harrying Real players out of possession just outside his own box, and you only need to look at his busy heat map over the 90 minutes.

Willing and able to deliver a dilligent shift for his teammates, while balancing defensive duties with creative tendencies, meant he was a nuisance they couldn’t handle. With three key passes and 95.2% total success in possession, he linked up well alongside de Bruyne and it seemed inevitable they’d find a goal eventually.

So when he forced an important save from Courtois and watched his well-struck effort cause a goalmouth scramble on the stroke of half-time, he importantly kept spirits up. The goal would come. It did, after 78 minutes, as the pair combined again and Jesus’ header beat Courtois from close-range, after shrugging off a backpedalling Ramos moments before.

This was precisely the acid test Jesus needed and although he missed a few promising chances, enthusiasm and determination never wavered. That’ll stand him in good stead, having excelled at the Bernabeu with a bold display playing a variety of different positions. 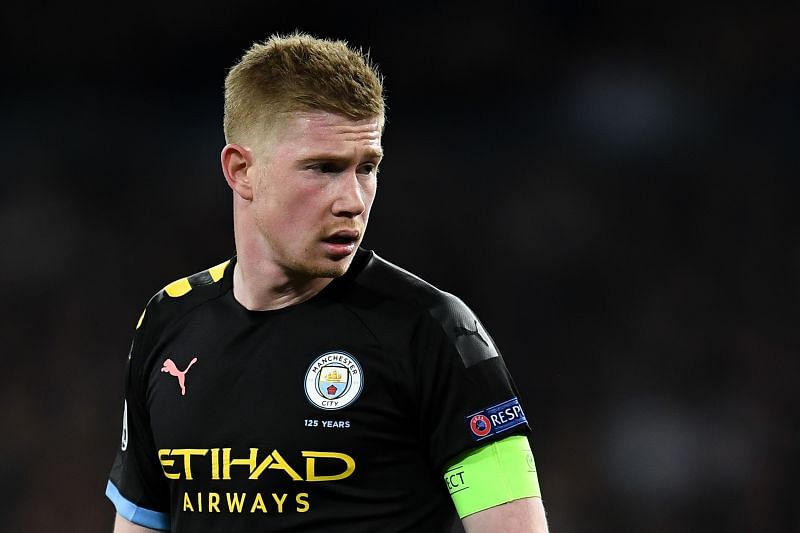 Captain fantastic: de Bruyne led by example as City came back from a goal down to prevail against the odds

Jesus excelled in keeping critics quiet, but there was one man better: captain Kevin de Bruyne, who led by example and proved pivotal in their second-half fightback.

He recorded a game-high four key passes, created an assist and scored their winner from twelve yards – easier said than done given City’s penalty woes of late – while again showing why he’s arguably the world’s best midfielder. Stepping up when his side needed him most.

With three successful dribbles, two interceptions and 81.6% pass accuracy on the night, this wasn’t a flawless performance from the Belgian, which perhaps makes his influence all the more impressive.

As previously mentioned, his link-up play with Jesus caused Real problems throughout the evening, but he stepped up significantly after an average first-half by his standards. He flashed a shot well wide from a promising angle, committed two fouls and won just four of 13 total duels over the 90 minutes. All while also losing possession 17 times!

However, it was his vision and intelligent movement which caused the hosts’ backline to split whenever he manipulated the ball in tight spaces. He darted into the box and somehow left three players in his wake before dinking a great pass towards Jesus’ path near the back post.

He took advantage of a ball-watching Casemiro to feed Sterling down Carvajal’s side, watched his teammate earn the penalty then stood up and made no mistake beyond his compatriot. Simply brilliant.