Goals from Willian and Ross Barkley were enough for Frank Lampard’s Chelsea to book their place in this season’s FA Cup quarter-finals at Liverpool’s expense during an enthralling encounter in west London.

Willian netted his first goal of 2020 in rather bizarre fashion, firing goalwards with venom before watching Adrian parry it into the bottom corner after 13 minutes.

The Reds‘ second-choice goalkeeper made good saves to deny both the Brazilian and fellow scorer Barkley shortly beforehand, though had a bemused look across his face at his defenders’ insufficient protection – but it was a costly mistake which accelerated a frenetic first-half.

Liverpool had ample chances to equalise and more, with Divock Origi and Sadio Mane in particular coming close. Kepa Arrizabalaga, making his first appearance since their 2-2 draw with Arsenal on January 21, was a man inspired between the posts – especially after pulling off a brilliant triple save during a goalmouth scramble.

Despite renewed pressure after the interval, Chelsea ultimately made their chance creation pay. Barkley made a marauding run from his own half to double the Blues’ lead after 64 minutes, adding a welcome two-goal cushion for a side who kept just three clean sheets in their last 15 matches (all comps) before this encounter.

The result means Jurgen Klopp’s men, 22 points clear of their closest Premier League rivals, have now lost three of their last four games across all competitions. For context, they have only been defeated on five occasions so far this season. Without further ado, here’s a look at five hits and flops from a memorable watch at Stamford Bridge: 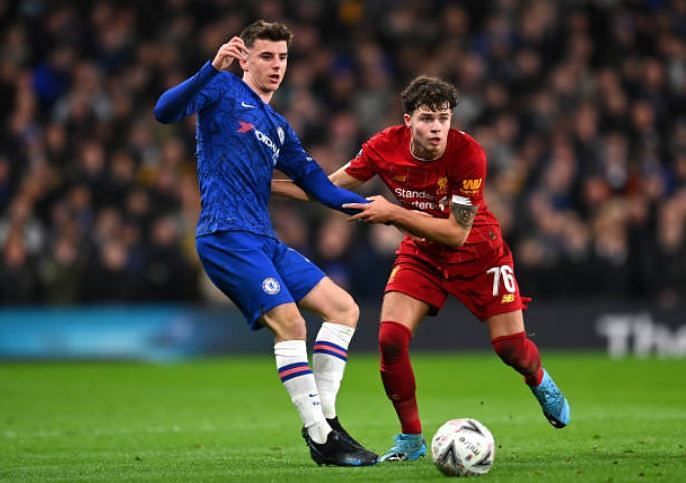 Williams defended well early on, but his creativity left a lot to be desired and he faded dramatically

Unfortunately for the Wales under-19 international, the Blues proved a step too far in terms of his progression towards the Reds’ first-team picture. It’s not that he didn’t fit in or stood out like a sore thumb on this occasion, at least not during the early exchanges. If not for his last-ditch recovery defending, Liverpool would have been 3-0 down after 30-odd minutes.

He made a superb challenge to deny Pedro as he shaped to shoot in the area, before committing another crucial interception – clearing Willian’s delivery to safety with an unmarked Olivier Giroud lurking behind him, ready to pounce.

However, his creativity levels were underwhelming throughout and it’s worrying to see from a side that benefit largely from width – Robertson and Alexander-Arnold – to be struggling in that area.

He lost possession a game-high 30 times, completed none of his three dribble attempts and delivered 10 crosses with no success. Although his defensive awareness was commendable, there’s plenty of work still to be done before he features more regularly. 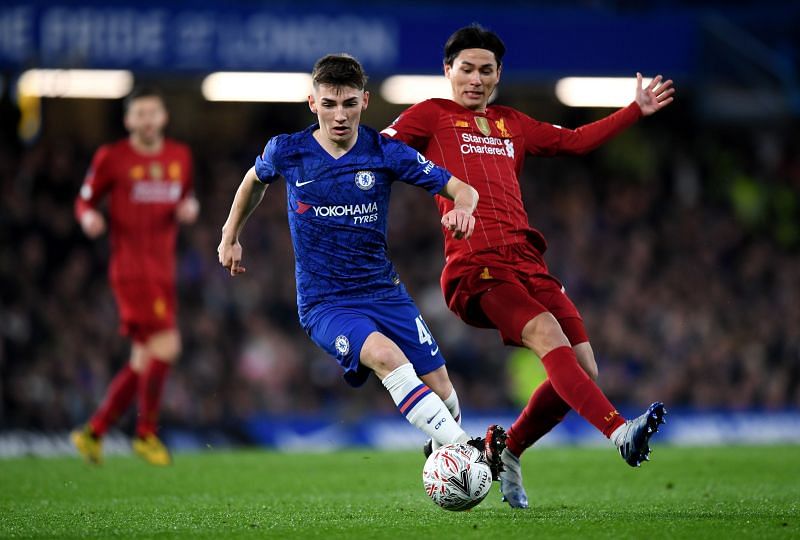 If you’ve had the pleasure of tracking Billy Gilmour’s progress like some youth aficionados in recent years, you’ll know that an unfazed, composed display from him in a game of huge significance was a long time coming. Gilmour has made fleeting sub debut appearances in the Premier League and FA Cup this term, but this was his first Chelsea start.

He oozed class, quickly justifying why Lampard had faith in him to accompany Kovacic-Barkley in his three-man midfield. Unafraid to get stuck in, he won six of 11 duels and looked comfortable despite his slight 5’6 frame.

Making an important recovery challenge in first-half stoppage-time rather typified his desire and positional awareness: matching Mane stride-for-stride, before calmly removing danger to save Marcos Alonso’s blushes after he was exposed in possession and almost gifted Liverpool a timely equaliser.

The Scotland under-21 midfielder is still 18 until June, but was recently promoted to Lampard’s first-team squad on a permanent basis – two years on from the highly-rated teenager’s move from Rangers. Now officially the youngest senior player as part of an ever-changing Blues crop, Gilmour could have an important role to play over the coming months with Lampard’s midfield options dropping like flies.

N’Golo Kante (adductor), Mateo Kovacic (Achilles) and Jorginho (suspension) are all sidelined with various return timelines but after a confident showing against the league leaders, such experience will stand him in good stead – especially ahead of a summer poised for transition under Lampard’s watch in west London. 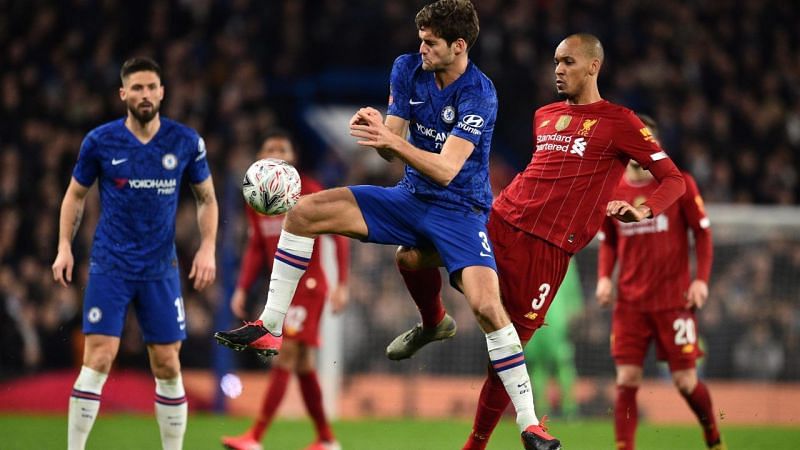 Fabinho was sloppy in possession, bypassed too easily and made sluggish mistakes too

Since returning from a ligament injury that sidelined him for eight weeks, it’s fair to say Fabinho hasn’t been the same destructive player who prompted many Liverpool supporters to herald him as one of the world’s best in his position.

Instead he has been sloppy in possession, sluggish in the tackle and a rather unconvincing midfield protector for the runaway league leaders. The same was the case on this occasion, with the Brazilian playing like he’d just woken up and still had to catch his bearings at times.

Although Joe Gomez and Adrian were not blameless, it was his needless error in possession which gifted Chelsea’s opener. A slack pass was cut out and within seconds, Liverpool had a deficit to overturn. Barkley’s marauding run was excellent, but poor from Liverpool’s perspective: how could the former Everton man be allowed freedom to roam through midfield from his own half, untouched? Fabinho was lagging behind in pursuit.

Gilmour won the Man of the Match award, but for a player of his slight frame, he had a licence to glide and orchestrate in areas that Fabinho should have made his own: regardless of whether he had Lallana and Curtis Jones next to him or not.

He won just four of 13 duels, lost possession 14 times, was dribbled past on three occasions and committed two fouls – booked for a challenge on Mount, from which the English playmaker hit the crossbar. 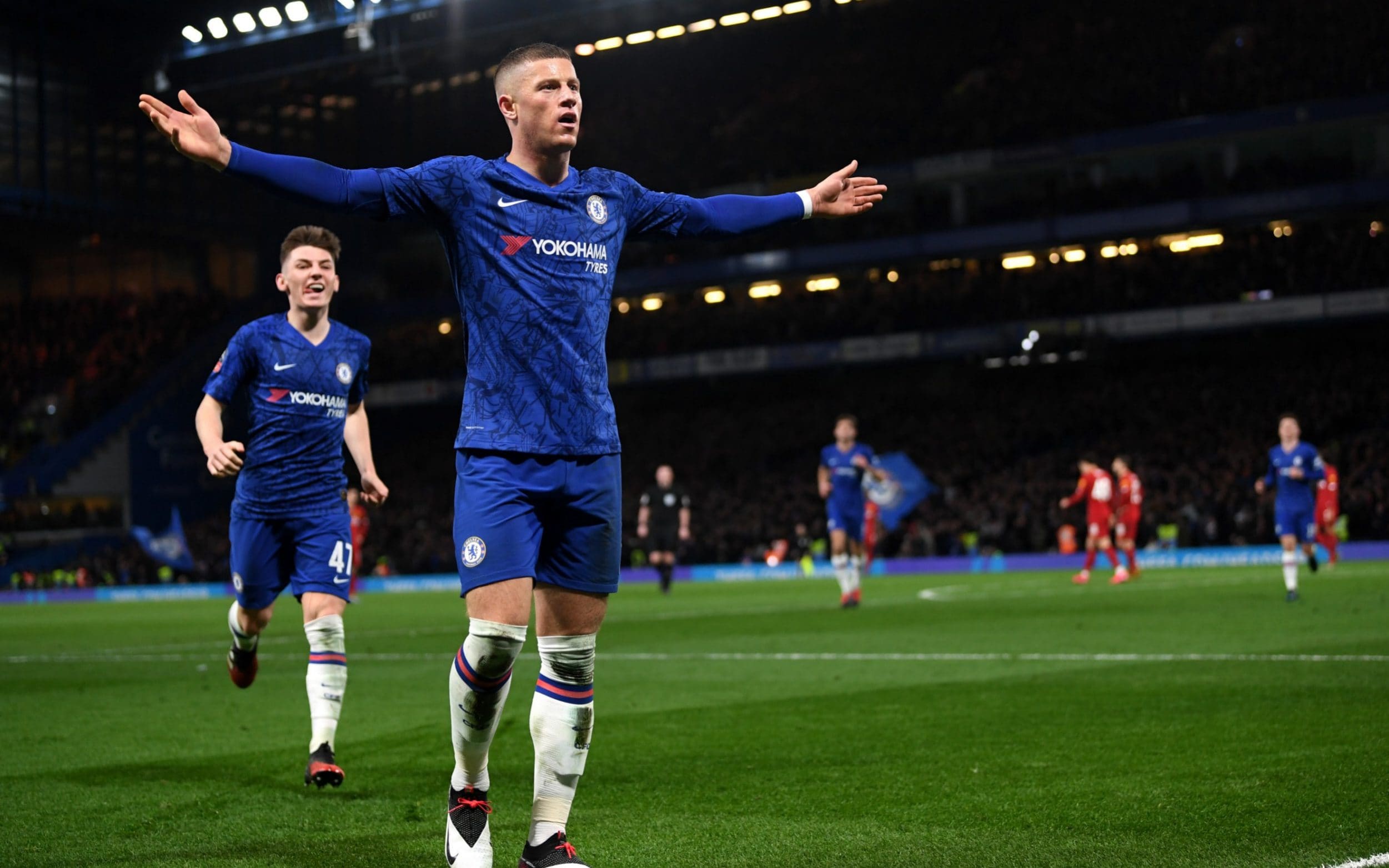 Considering all the criticism he receives, it was refreshing to watch this Ross Barkley display. It served as a timely reminder of his capabilities in a Chelsea side that needs more inspiration from midfield – not always a one-man show from a tireless Mateo Kovacic.

They are creative-minded players who work well together as both are good at different things: Barkley thrives in transition, with space and time to pick his next move, where he can maraud forward and create chances either for himself or usually teammates.

The stick usually used to beat him with, is the fact he’s struggled for regular goals and assists since his surprise £15m move from Everton two years ago. In fairness, he has played a whole host of different midfield roles – but needs to better balance his creative tendencies with his defensive responsibilities. Performances like this one show he’s doing that.

Despite an average 75.9% pass completion rate, Barkley won nine of 14 duels contested, made three interceptions and clearances, completed two dribbles and a tackle too.

What was key to his fine finish, was the fact he saw an unmarked Pedro to his right but crucially chose to strike goalwards – blasting beyond Adrian. Often in those moments, he might overthink the situation and choose a safer option but with renewed confidence, you’ll see more self-belief.

He remains a divisive figure in west London, as moments of brilliance like his brilliant solo goal are mixed with frustrating decision-making that leaves a lot to be desired. The onus is on him to maintain consistency and retain that creative spark after a memorable showing like this, not least with the Euros three months away and Southgate watching. 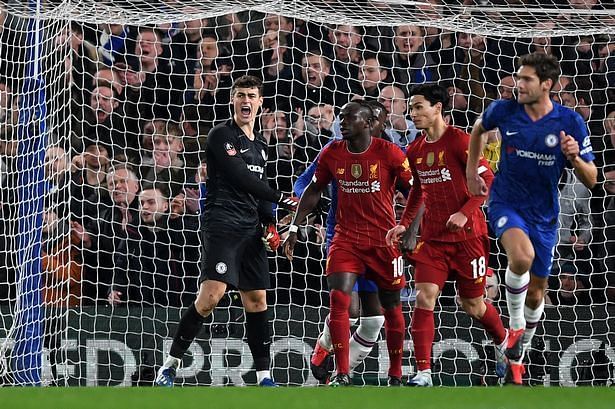 Kepa made his long-awaited return, excelling with a string of impressive saves to earn his clean sheet

They say time heals everything. Kepa Arrizabalaga had been in the cold, watching helplessly from the substitutes’ bench for weeks as 38-year-old Willy Caballero stood firm in his place.

This outing represented his golden chance to silence the critics while going some way to earning his berth as first-choice ‘keeper back and was one he grasped defiantly with both hands. 18-year-old Gilmour stole the show with a mature display, Barkley excelled while Liverpool were beaten again – but this entire piece would have been flipped upside down, if not for Kepa’s brilliant saves.

He’s been endlessly criticised for having the league’s worst save percentage (56.1%) and that’s far from a flattering statistic when you’re the world’s most expensive goalkeeper. No-one stopped to think about his defensive protection, or lack thereof.

Caballero had conceded 11 goals in six games (all comps) with no clean sheets, so clearly this wasn’t just as straightforward as Kepa’s dwindling form. Nonetheless, the 25-year-old Spaniard stood up when needed most to keep his second clean sheet of 2020.

He denied Mane early on, then delivered the ridiculous triple save above after 20 minutes – denying Mane, Origi and Jones during a goalmouth scramble. Diving low to stop a determined Mane again, after he’d effortlessly muscled his way through, he was reliable.

Just like Gilmour and Barkley, there’s no reason why Kepa doesn’t have a pivotal role to play between now and mid-May, especially after a performance like that. Lampard’s men are keen to finish with silverware and a Champions League qualification place for 2020-21: they need their first-choice ‘keeper back to form.