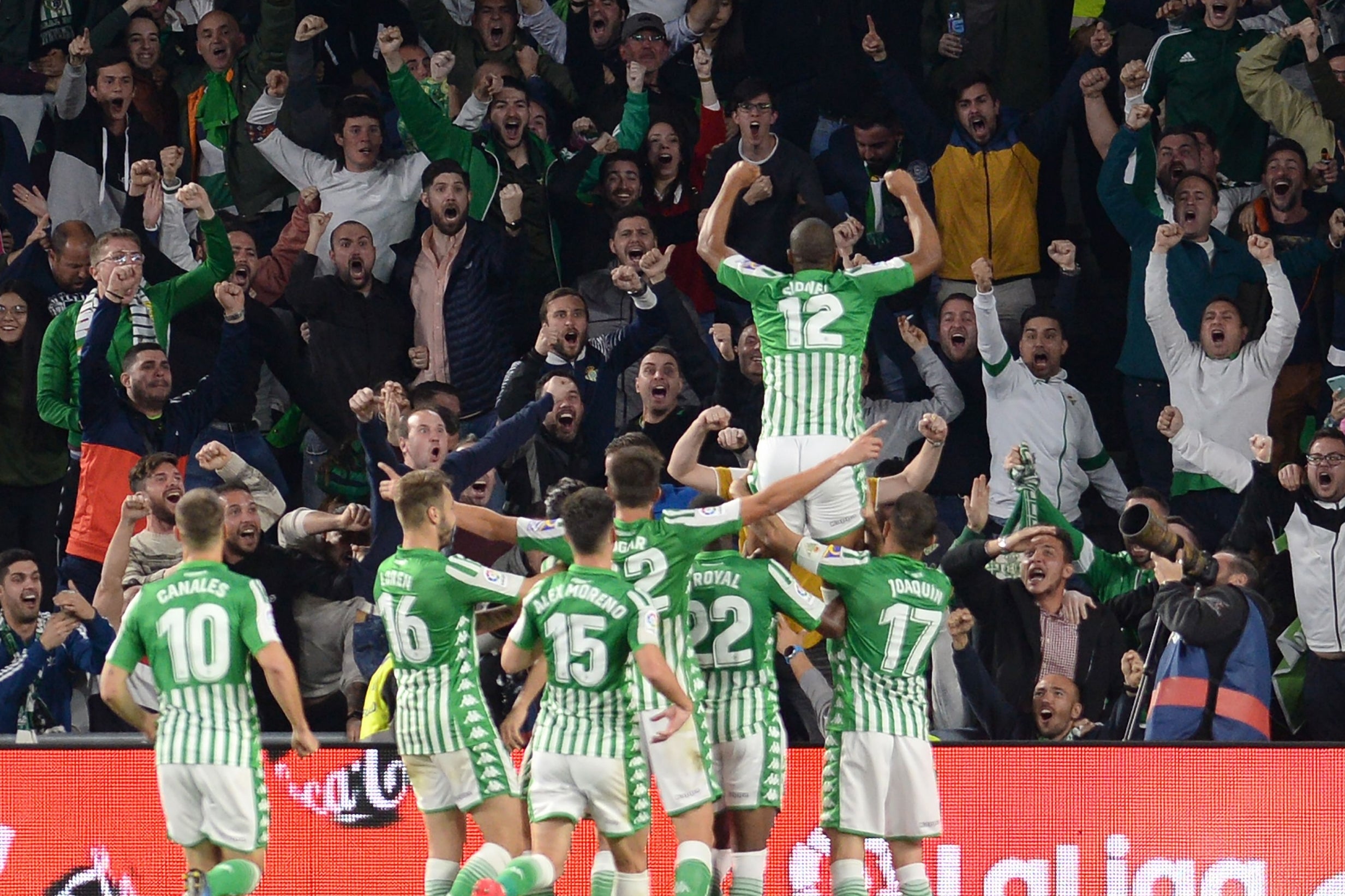 Real Madrid have now won just one of their last five games across all competitions, after succumbing to a 2-1 away defeat by an inconsistent Betis side – who leapfrog two sides into 12th after this result. Joan Rubi’s men were just five points above the relegation places before kick-off on Sunday evening, though delivered a spirited display to record their first La Liga win since January 19 against Real Sociedad, the second of 2020.

After half-chances by Marcelo and Vinicius Jr were squandered in the first half-hour, Betis took charge and broke the deadlock after 40 minutes.

Thibaut Courtois was forced into a brilliant reflex save to deny Nabil Fekir, minutes before the Frenchman created the hosts’ opener. Ramos bundled Fekir over in the box but as play continued, the loose ball fell to centre-back Sidnei of all players. He blasted goalwards at Courtois’ near post, watching it fly beyond the Belgian with aplomb.

Their lead lasted all of five minutes though, as Sidnei went from hero to villain in first-half stoppage-time after being penalised for a mistimed challenge on compatriot Marcelo in the box. The referee had no choice but to award a spot-kick, which was duly converted by Karim Benzema – netting his first goal since February 1.

Luka Modric made a goal-saving interception ten minutes after the restart, as combination play between Fekir, Sergio Canales and Joaquin saw the latter through on-goal after rounding Courtois in the area. After 70 minutes, substitute Ferland Mendy saw a speculative effort cannon back off the crossbar after Modric forced an important stop by Joel Robles, before Betis retook their slender lead.

Cristian Tello made it 2-1, as the hosts capitalised on a costly mistake in possession by Benzema. His sideways pass towards Ramos wasn’t powerful enough, which saw the Spaniard effortlessly dispossessed by an alert Andres Guardado. He accelerated in transition before feeding substitute Tello, who remained calm under pressure and waited for Courtois to move before cooly slotting his effort into the bottom corner.

Despite their pressure forcing a few promising chances late on, Real failed to find the all-important equaliser and were left ruing another preventable defeat. Without further ado, here’s a look at the hits and flops from a memorable night: 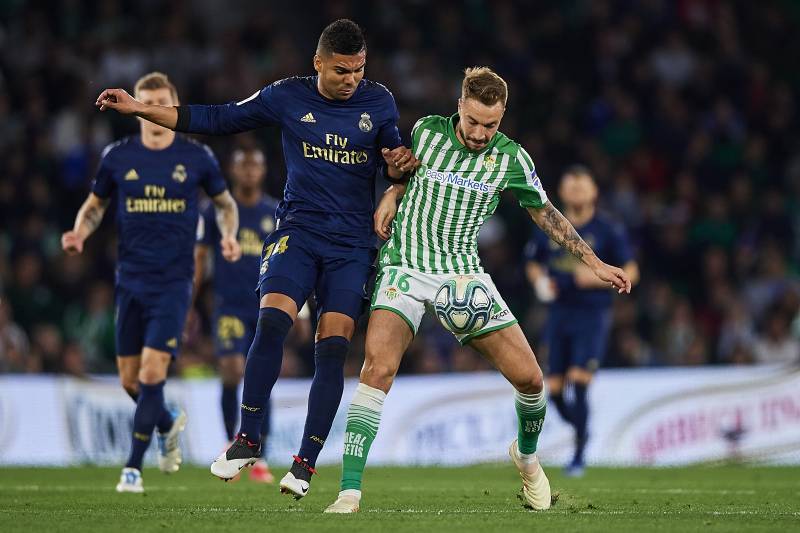 This was a frustrating watch for Loren, who was largely on the perhipery and not afforded many opportunities to excel in the final third like his savvy teammates against a Real backline there for the taking. The 26-year-old may have a career-high nine La Liga goals to his name already this term, but never truly seemed likely he’d add to that on this occasion.

With one off-target effort, he registered a game-low 22 touches, won three of ten duels contested, lost possession on nine separate occasions and was more of an occupying presence in attack than anything else.

This was certainly a frustrating game from his perspective, one that passed him by as Los Blancos didn’t afford their hosts much opportunity to create intricate openings and this meant he wasn’t their outlet in forward roles – most of their chances came through counter-attacks. Joaquin could have put the game to bed in the second-half, but was still one of Betis’ better performers

Perhaps the only blemish on Joaquin’s display was the indecisiveness that saw Modric greet him with a goal-saving second-half block. It was precisely the match-defining action that could have shifted this game in either direction: finely poised at 1-1, Betis were purposeful after the interval and remained a real counter-attacking problem for Madrid to be wary of.

Joaquin was replaced by eventual matchwinner Tello, but that’s not to say he didn’t do his job effectively on this occasion: six dribbles completed, three key passes, 81% completion rate, two interceptions – it’s hard to believe the midfielder is 38-years-old when he plays with such energy and invention.

Having rounded Courtois, he seemed stuck in two minds: shoot goalwards with an empty net at his mercy, albeit from a tight angle – or square into Canales’ path across goal. Thankfully after his tireless display, that moment of madness was not one he would rue at full-time. 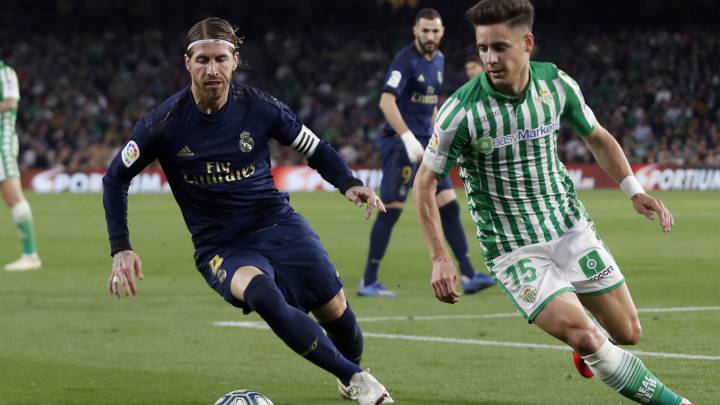 Ramos was sluggish, at fault for one of Betis’ goals and needs to be sharper when leading by example

Immediately post-match, Sergio Ramos was in the mixed zone and frankly told the interviewer that Real cannot afford to lose games like this, if they harbour serious title aspirations – regardless of Barca’s shaky form. Having won last weekend’s El Clasico, Los Blancos have shot themselves in the foot and crucially lost ground on the defending champions, who were slender 1-0 winners against Real Sociedad on Saturday.

Ramos’ comments were honest but to be expected given their frustrating all-round display, though he won’t enjoy watching the game film from this one considering the way in which they conceded both goals.

The first one is a beautiful strike from an unlikely source, but Ramos makes a mess of things inside the area immediately before Sidnei lets fly. Had play not continued in Betis’ favour, he probably would have given away a spot-kick after crashing into Fekir.

Betis’ second is equally grim from Real’s perspective: Benzema’s loose pass throws Ramos under the bus, he is dispossessed and Barca academy graduate Tello (who else?) speeds away to finish.

Ramos may have completed two clearances and blocks, alongside a tackle over the 90 minutes, but he was far from his influential best: being dribbled past on for occasions, while being at fault for Sidnei’s opener.

He won 5 of 10 duels, remained adventurous and you could see him regularly featuring in midfield positions to try and quicken the pace – either that or upfront in the final few minutes. It proved merely a futile attempt to save a result.

Nabil Fekir is one of those polarising players: he can often drift in-and-out of games, making you question whether he’s truly worth the hype and speculation over his future. Seemingly set for a £50m Liverpool move two years ago, Fekir took a step down in migrating to Spain with a Betis side that lack creative players like him.

However, it’s games like these where he can showcase his matchwinning ability – without getting on the scoresheet. Credited with the assist for Sidnei’s rocket, the 28-year-old constantly buzzed about in midfield and shone as the only player Real couldn’t isolate when he got going.

He completed four dribbles, had 86% pass completion rate (1 key pass), forced Courtois into a brilliant one-handed save in the first-half and didn’t shy away from his defensive duties either – winning eight of 15 duels, with two tackles and an interception over the 90 minutes.

If his game could be summed up in one move, it was the way he carried the ball confidently in transition and created chances from seemingly nothing. After 75 minutes, he bypassed Casemiro effortlessly and waltzed past Eder Militao, seconds before Andres Guardado volleyed an effort narrowly over the crossbar. That could have been their winner.

Sidnei let fly with a thunderous strike to break the deadlock, while working hard defensively – he needed to

He may have given away the stoppage-time penalty that handed Real respite just before half-time, but this was a game where Sidnei really stepped up in. That proved to be a needless blemish during an otherwise influential showing by the 30-year-old defender, who has struggled with injuries and a lack of first-team minutes this term.

He made five clearances, four interceptions, three tackles and one block over the 90 minutes – winning six of 12 duels while breaking the deadlock in style to score his first La Liga goal of the campaign.

You’d be forgiven for thinking Courtois wouldn’t be beaten on this occasion, especially having pulled off an excellent save minutes prior. But from an unlikely source, his clean sheet was ruined with aplomb – the Brazilian thundering goalwards at his near post, power and precision, into the roof of the net.

He had no chance. Committing the penalty minutes later threatened to derail his encouraging performance, but only served as a costly reminder that every moment would count against a relentless Real side who are fighting for the title and Betis needed him to stand tall alongside a motivated Marc Bartra in the second-half. He did just that.