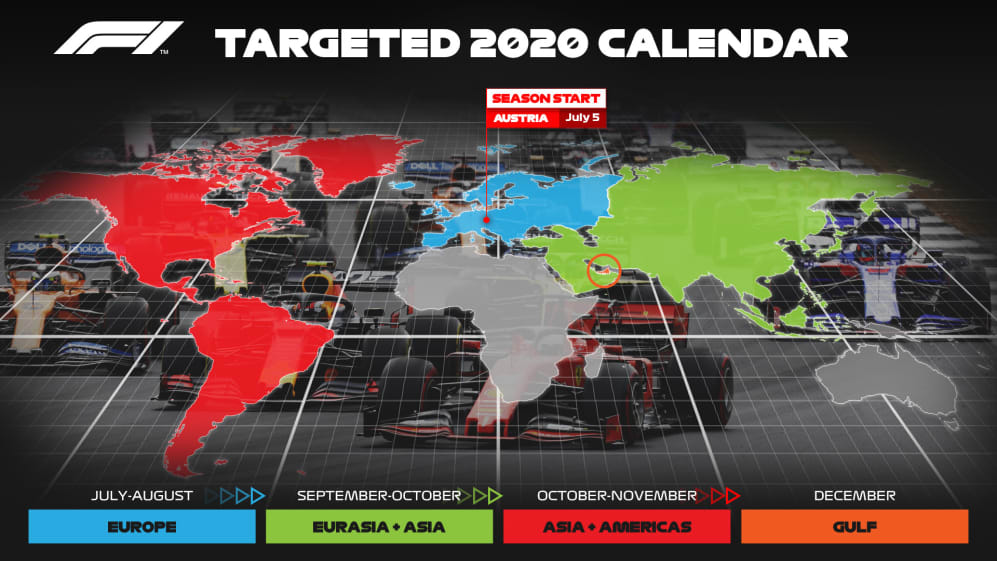 Formula One CEO Chase Carey says there’s increased faith in their plans to host a 15- to 18-race season, starting in Austria (July 3-5) and continuing this summer. This comes after yesterday’s announcement that the French GP was cancelled.

Carey released a statement on the status of the 2020 season, as Monday’s announcement means the calendar’s opening 10 races have either been postponed or cancelled.

He cited the Austrian GP at the Red Bull Ring on July 3-5 as a reasonable starting point for this season to begin, previously targeting the summer to start their delayed schedule.

“We’re targeting a start to racing in Europe through July, August and beginning of September, with the first race taking place in Austria on 3-5 July weekend.

September, October and November would see us race in Eurasia, Asia and the Americas, finishing the season in the Gulf in December with Bahrain before the traditional finale in Abu Dhabi, having compelted between 15-18 races.”

Also, the 66-year-old revealed there is an expectation that early races will be without fans in attendance – something that could change over time deeper into the calendar.

However, everyone’s health and safety is of paramount importance, so these races will not go ahead as planned if there is any uncertainty surrounding the ongoing pandemic.

“The health and safety of all involved will continue to be priority one and we will only go forward if we are confident we have reliable procedures to address both risks and possible issues.”

How the F1 scheduled has been affected so far

What races are still on, for now?

Behind closed doors the only option right now

Yesterday, Silverstone’s managing director Stuart Pringle wrote a letter to fans revealing their decision to host the British GP (July 17-19) behind closed-doors, if things are given the green light to compete in two months’ time.

As quoted by their official website, he said: “It is clear given the current conditions in the country and government requirements in place now and for the foreseeable future, we are unable to stage this year’s British Grand Prix in front of the fans at Silverstone.

“Our obligations to protect the health and safety of veryone involved in preparing and delivering the event, our volunteer marshals and Race Makers, and of course, you, the amazing fans, means that this is the best, safest and only decision we could make.”

You can read Stuart’s statement in full, here.

Two weeks ago, Austria loosened lockdown restrictions by allowing thousands of shops to open, although people are still being encouraged to work from home where possible.

By doing so, they became one of the first European countries to do so and are planning to ease their lockdown further from this week Friday onwards.

The Red Bull Ring is outside the remote town of Spielberg, which has 5,000 residents – while already discussing the possibility of staging a behind-closed-doors F1 event.