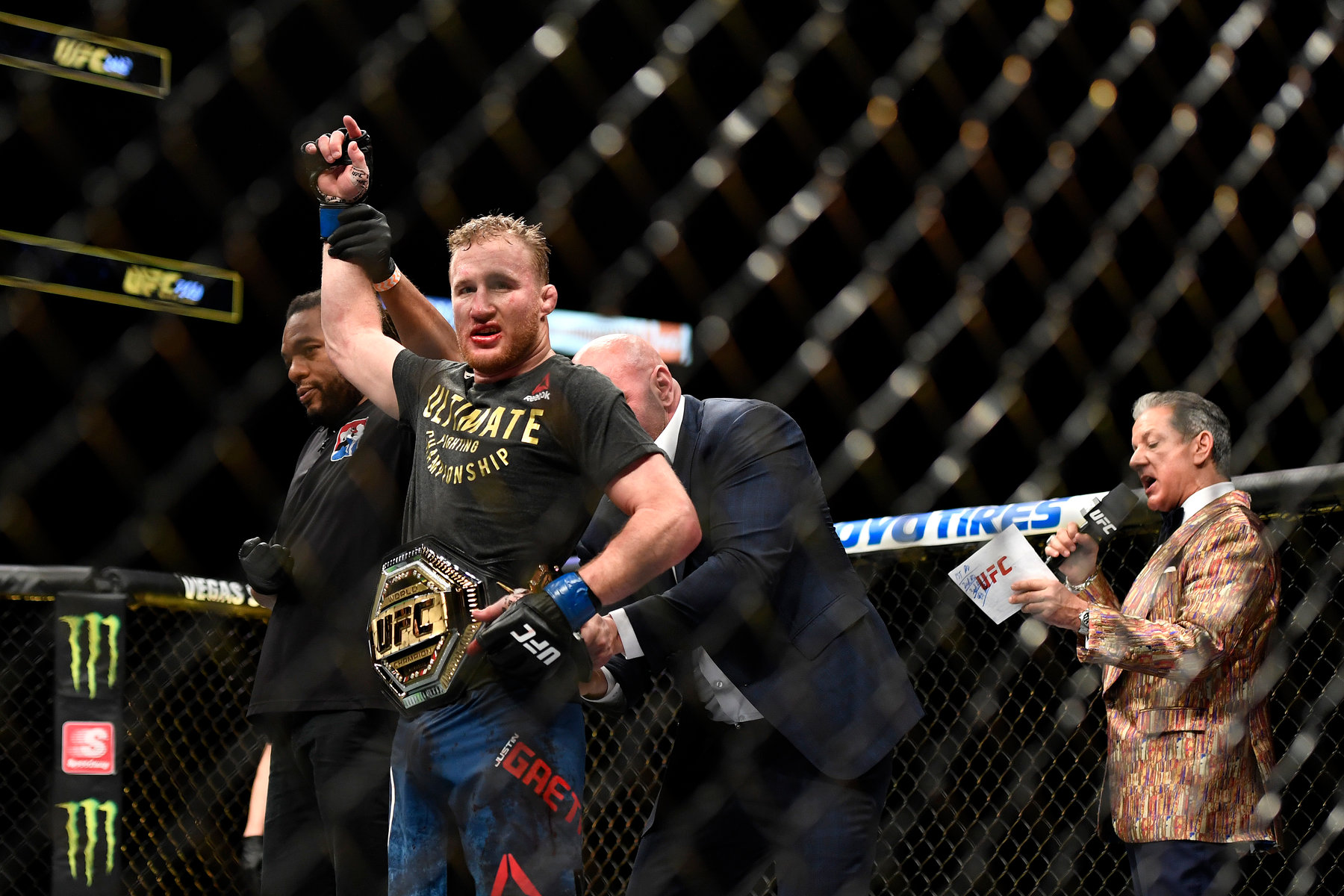 Regardless of your opinion on the ethics, morals and more besides – the UFC delivered what they promised. The first US sport to return during the coronavirus pandemic.

This stacked card certainly didn’t disappoint: Cejudo cementing his legacy as one of the best of all-time with a R2 TKO victory over another legendary figure in Cruz.

Then, Fergsuon-Gaethje saw a record broken as a new interim lightweight champion champion was crowned – while unbeaten champ Khabib Nurmagomedov watched on from home like millions of us at home worldwide.

The result means Khabib-Gaethje is the fight to make next and naturally, the one everyone’s been heavily anticipating for years gets shifted onto the back burner again. 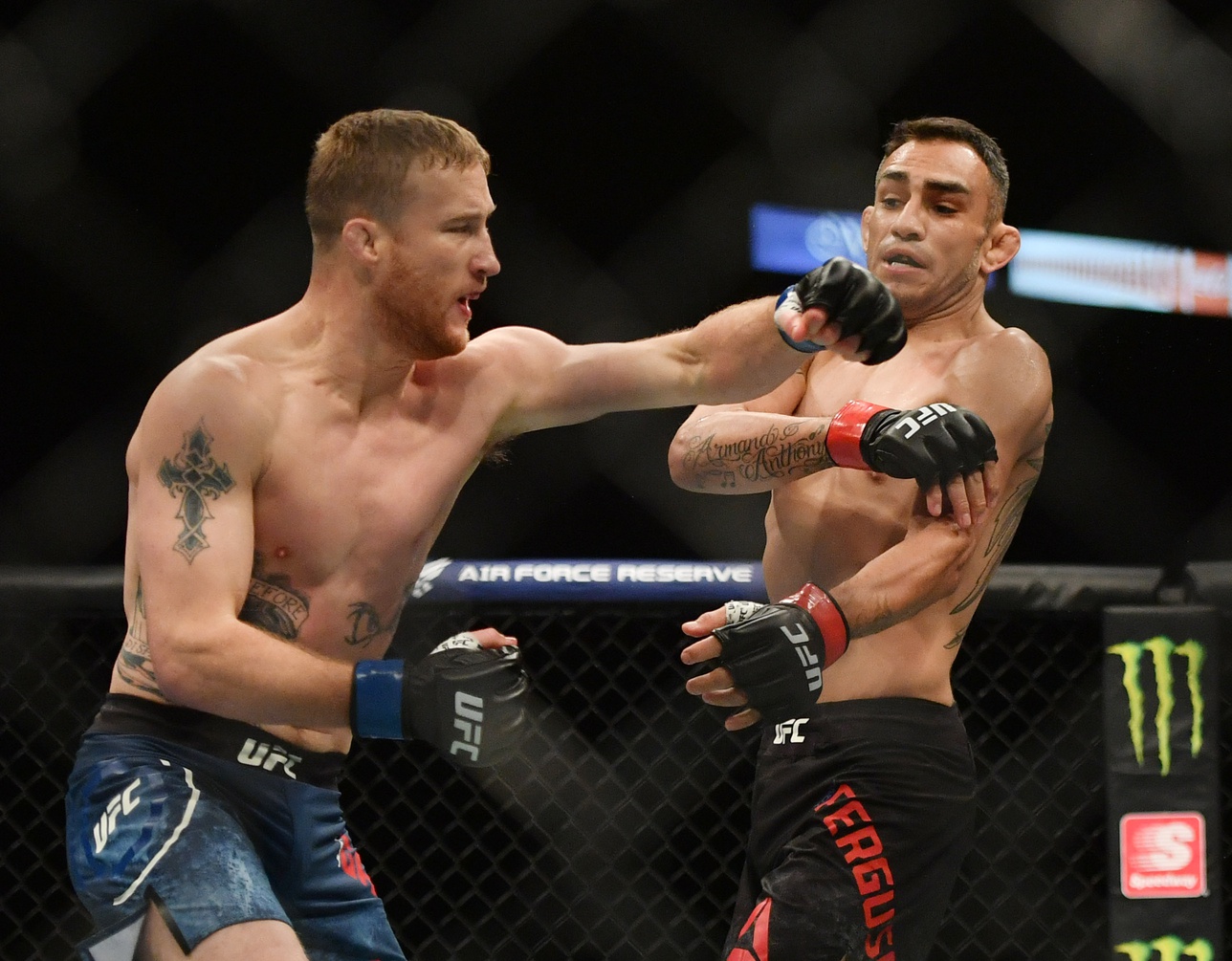 This clash was exciting and equally a nervy one to watch, given all that was at stake.

It felt surreal without boisterous fans in attendance to build this main event up, but even judging by the early exchanges in R1, the pair certainly didn’t need any fanfare.

Ferguson’s awkward movement caused Gaethje into some initial adjustments, as both exchanged strikes to begin the early stages. Gaethje consistently landed his left hook and loaded up with both power and accuracy, as his purposeful start intensified into R2.

Although Justin continued landing power shots, Ferguson invited them. He was absorbing them before an intensity shift late in R2, as Tony connected with a beautiful uppercut in the final few seconds.

Given the evening’s dubious judging at times, that flash knockdown could have earned him a round on the scorecards – but there wasn’t much more where that came from.

Why? Gaethje’s trainer Trevor Wittman urged him to take power off his shots, otherwise he’d tire quicker while providing Tony with welcome encouragement to push forward.

They continued exchanging strikes in R3, though Ferguson’s face began to swell and his eyes? Both were puffy, bruised and bleeding fairly quickly, which impaired his vision.

The sheer punishment he sustained cannot be overexaggerated, especially when Gaethje did well to mix up his shot selection – timely leg kicks and listening to his trainer too, more accurate punches without pushing too hard for a highlight reel finish.

Into the championship rounds, more of the same

Ferguson was behind on the scorecards and needed to increase his productivity while reducing damage absorbed if he wanted to come through unscathed.

Ultimately though, nothing really changed: Gaethje was intelligent with his punches, checking Ferguson’s leg kicks and landing strikes which stumbled the interim champ.

It happened multiple times, too. For all of Tony’s bravado and bullish attitude, he was clearly hurt and not doing himself any favours either with limited head movement.

With that in mind, it’s no wonder referee Herb Dean called a stop to the contest after 3:39 in the final round. Much to Ferguson’s frustration, he could have no complaints.

Post-fight comments as Khabib up next for Justin

Gaethje’s eager to face Khabib next, while revealing he relishes the big challenges:

“I’ve worked for this since I was four-years-old. I have a world-class coach, had to lose to change, can’t fix what’s not broken. I’m happy to represent the US against Dagestan or Russia, whatever. There’s no bigger challenge that I want right now other than Khabib.

I feel bad for him [Ferguson] because if I was him, I’d be f—ing pissed. I told my coaches that I’m ready to die here tonight. I’m a killer in here but as soon as I step out of the Octagon, you won’t see that same side of me.”

Ferguson meanwhile, eventually praised Gaethje despite initially refusing to embrace post-fight, admitting he’d been engrossed in a long camp for a different opponent.

“It’s been a long camp, we’ve been preparing since November. Obviously it fell through with Khabib, Justin was the only one who wanted to sign on the dotted line.

The weight cut had nothing to do with it, prepared for Khabib – [he’s] not too much of a striker. S–t happens, what can you do? I wish I got finished, rather than someone stepping it. Props to Justin and his team, he’s a tough son of a b—h. Hopefully everybody enjoyed the fight, we did this for you, brining sports back. To my family, I’m okay.” Cejudo landed a brilliant knee which ended Cruz late in the second round, retaining his crown

Henry Cejudo (16-2) retained his bantamweight title with a R2 TKO victory over Dominick Cruz, who was understandably left frustrated with the manner of his stoppage.

There was somewhat of a feeling out process by both but especially Cruz, who has been out of action for over 1,000 days. Nonetheless, the champ landed a number of good leg kicks which certainly helped his case on the judges’ scorecards with limited action early.

In R2, Cruz started landing a few good punch combinations and tried his utmost to make Cejudo uncomfortable with his dynamic movement. But how do you limit someone’s movement? Cut them down to size, chop at the legs – frustrating them into mistakes.

After an accidental clash of heads saw Cejudo cut and the match paused, Cruz paid the ultimate price late on. He missed wildly, left his head open and Cejudo timed his strike to perfection: landing a devastating knee which was the beginning of the end.

Some ground-and-pound strikes and sprawling on the ground followed, before referee Keith Peterson stopped it – as Cruz was trying to recover and mid-motion trying to get up. 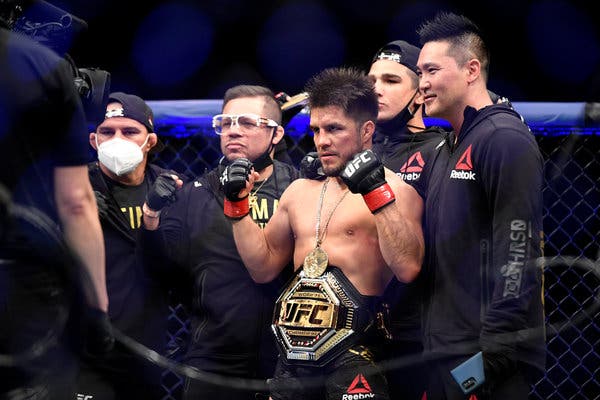 Cejudo poses with his team of coaches post-fight, having retained the bantamweight title

Speaking to Joe Rogan in the Octagon afterwards, Cejudo said that targeting Cruz’s legs was part of his strategy, which worked very well:

“I can adjust, you can try to study me, train for me but at the end of the day I’m an athlete – I’ve got a great coach, Eddie Albarracin, he put the gameplan together.

We stuck to the gameplan, that’s all she wrote. I’m ruthless Joe, I may be cringy, corny but boy can I fight. I am the greatest combat sports athlete of all-time: nobody has my resume, I defended my flyweight, bantamweight titles and am Olympic champ.”

Then, it was time for reflection as he looked across towards Dana, revealing what’s next:

“I want to make an announcement. Uncle Dana, UFC, everybody, thank you so much… Joe, I’m happy with my career. I’ve done enough in the sport, I want to walk away, enjoy myself.

“I’m 33, have a girl now, I eventually want to start a family. Since I was 11, I sacrificed my whole life to get to where I’m at today, so I’m retiring tonight. I’m happy with my career, thank you Dana for everything, you’re the man. Triple C’s out.”

Statistic: Cejudo is now only the second fighter in UFC history to successfully defend a title in two weight classes, after Daniel Cormier (LW, heavyweight)

Cruz was still frustrated after a contentious referee stoppage – even though he was hurt and in danger, felt there should have been more patience given the circumstances:

“I’m not happy with the stoppage obviously. I specifically asked the referee to let me go until I was out – I was standing up. If I stayed on the floor, I get it, but was on my way up.

“I was definitely still aware of what was going on. I get there were unanswered shots, that’s part of a fight. Hats off to Henry, no excuses – I shouldn’t have got caught with that knee the way I did, which put me in that position. But my argument is, I was standing up to my feet – how can you be doing that and be knocked out at the same time?”

It’s hard to imagine Cruz wants to return to commentary/analyst duties in the immediate aftermath, especially if Cejudo’s retirement is genuine as the champ suggested a knockout tournament should be made to contest his belt, during the post-fight presser.

Time will tell, but at 35, perhaps he’s looking for one last successful display.

Ngannou warned Jairzinho against calling him out and proved precisely why

Francis Ngannou blasted Jairzinho Rozenstruik with yet another knockout victory after just 20 seconds in their heavyweight clash, further asserting his credentials as a bonafide title contender.

Despite absorbing a few leg kicks early, he rushed forward and caught Rozenstruik unaware. Failure to land four successive wild swinging punches didn’t deter him either, as he ultimately connected brilliantly and left his opponent slumped against the cage.

Only Thiago Santos (10) has recorded more knockout victories since 2015, with the Cameroonian improving his record to 15-3 – his first UFC fight was in Dec. 2015.

Calvin Kattar beat Jeremy Stephens during their catchweight bout with a brutal R2 TKO, after the latter weighed 4.5 pounds heavier than the 146lb featherweight limit.

Yorgan de Castro’s defiant pre-fight comments proved futile as he flattered to deceive during the main card’s opener against Greg Hardy. The former NFL defensive end improved his record to 6-2, after winning via unanimous decision (30-27, 30-27, 30-27).

Donald Cerrone was eager to bounce back after an embarrassing defeat by Conor McGregor in February, and although he lost by unanimous decision (29-28, 29-28, 29-28) against friend and former foe Anthony Pettis, the 37-year-old did fairly well.

As for the women’s strawweight clash, Michelle Waterson couldn’t mask her surprise after succumbing to a similar split decision defeat (27-30, 29-28, 30-27) by Carla Esparza.

In perhaps the most entertaining, strike-heavy clash of the night, Vicente Luque (18-7-1) ultimately prevailed against a determined Niko Price – via TKO (doctor’s stoppage).

As for the featherweight division, Bryce Mitchell won through unanimous decision (30-25, 30-25, 30-26) against Charles Rosa, extending her impressive unbeaten record to 13-0.