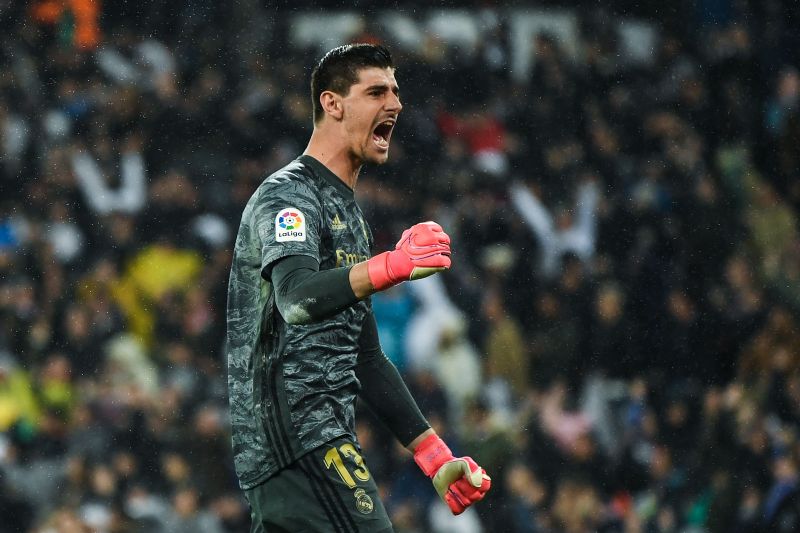 Real Madrid goalkeeper Thibaut Courtois provided another update for supporters on Twitter today, as he prepares for La Liga to potentially return next month.

The Belgium international had quietly been one of Los Blancos‘ best and most consistent performers this term before the pandemic suspended play in March.

He kept 15 clean sheets in 32 appearances across all competitions and considering they are just two points behind leaders Barcelona, he’s raring to resume play again.

On a Twitter post, Courtois said: “Training hard and staying safe at the same time,” alongside a picture of him cycling on an exercise bike with a face mask and gloves.

This season has been one of redemption, after early criticism

Having joined Real in the summer of 2018 for a reported £31.5m fee from Chelsea, Courtois had the unenviable task of helping to shore up a shaky backline as Los Blancos looked to rebuild after Cristiano Ronaldo’s departure for Serie A champions Juventus.

He was under pressure from minute one, which only intensified after Real endured a five-match winless league run between September and early November.

Courtois was heavily criticised during a season of transition, but has returned to his dependable self in 2019-20 – so it’s unsurprising to see him eager to return quickly.

3 – Thibaut Courtois has saved 30 of the last 36 shots on target ha has faced for @realmadriden in @LaLigaEN (three saves in the first half against Barcelona). Guardian. pic.twitter.com/gI2bYjAkvf

After La Liga president Javier Tebas confirmed they want to follow the Bundesliga’s lead by resuming play on June 12, Courtois clarified comments surrounding who is more deserving of the title, if play does not resume as planned.

The 28-year-old told TVE (H/T: Standard): “At no time did I say that Madrid should be crowned champions if La Liga is ended [without the remaining fixtures being played].

“We are in better shape, even though we lost to Betis [their last game before coronavirus shutdown] and if we play the 11 games that are left, I’m confident that my team can win LaLiga.”

Tebas told Movistar that he’s optimistic about returning next month, though that’ll depend on a number of factors.

“I’d like it to be June 12th but we have to be careful. It will depend on many factors such as potential rise in infections, factors which don’t depend on football but on Spanish society. We have to be very careful and focused on following the health measures – the virus is still there, with less infections but it’s still there.”

If play is cleared to resume and Los Blancos manage to emerge triumphant in this season’s title race, it will only be Real’s second league title victory since 2011-12.

Nonetheless, the Belgian remains confident. Madrid players including Eden Hazard have been pictured back in training at their Valdebebas base after almost two months at home in lockdown and although restrictions still remain, Courtois cannot wait to play again.

He continued, saying: “It has been strange because of all the rules, but there’s nothing better than feeling the pitch again.”

Courtois has regularly updated his Twitter with training posts while observing social-distancing regulations, which will give fans encouragement that he’ll continue where he left off form-wise as they target adding to their record 33 Spanish league championships.