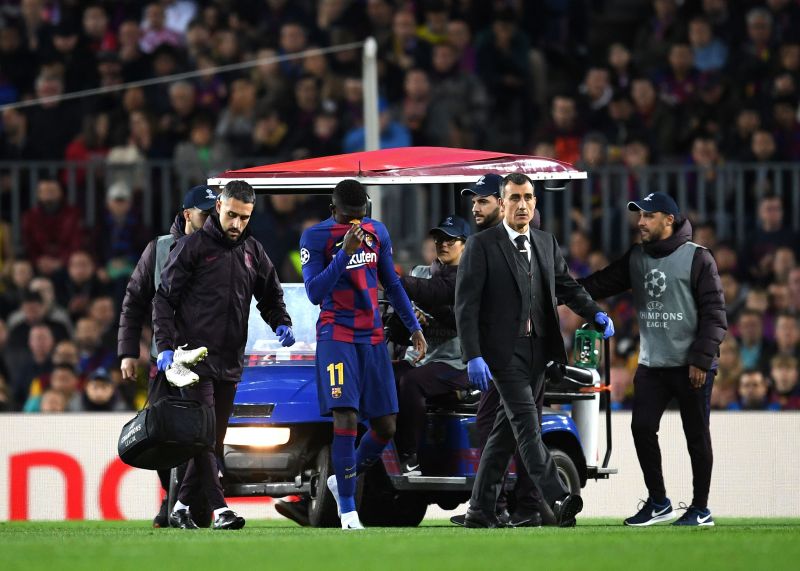 Barcelona winger Ousmane Dembele, who today celebrates his 23rd birthday, is progressing as planned in recovering from the hamstring injury that sidelined him indefinitely on February 3.

That’s according to doctor Lasse Lempainen, who operated on the Frenchman a week later – refuting recent claims suggesting the winger’s recovery had stalled as a result of the coronavirus pandemic.

As quoted by Sport, the Finnish doctor said: “I am very sure that he can return to the maximum level six months after the operation.”

After Javier Tebas’ comments earlier this week hinted that Spain’s top-flight could resume the 2019-20 season on June 12, he may ultimately feature in some capacity before the campaign is concluded – either domestically or in Champions League competition.

This season’s UCL knockout stages have been provisionally scheduled to resume in early August, by which time Dembele is expected to make a long-awaited return after another season plagued with troublesome injuries and more inconsistent form.

His last appearance saw him limp off vs. former club Borussia Dortmund in November.

Things worsened when he broke the proximal tendon of the femoral biceps on his right thigh on Feb. 3, before undergoing surgery in the Finnish town of Turku eight days later.

Coronavirus pandemic a blessing in disguise

Lempainen diagnosed him with a six-month layoff, which sidelined him for the rest of the season and derailed aspirations of earning a berth in France’s Euro 2020 squad.

However, the coronavirus pandemic and sporting suspensions worldwide have proven a blessing in disguise for the World Cup winner, as things have been disrupted.

His team were forced into the emergency signing of former Middlesbrough striker Martin Braithwaite, after he joined Luis Suarez (knee surgery) in the treatment room.

Nonetheless, the French winger remains a part of their Champions League knockout squad and will be eager to assert his quality once more among Europe’s elite – their last-16 second-leg tie against Serie A side Napoli has been slated for August 8.

17 – #OnThisDay in 1997 @Dembouz was born. @FCBarcelona have not lost any of the 17 matches in which Ousmane Dembélé has scored (14 wins and 3 draws) in all competitions. Talisman. pic.twitter.com/gbs7J1Px5J

Despite only making nine appearances – a total of 492 minutes – across La Liga and the Champions League this season, the Barcelona man will be eager to prove his worth.

Questions have been asked about his future and given the financial outlay they splashed to sign him from Borussia Dortmund in 2017, he’s failed to live up to expectations.

Time is of the essence, especially after Antoine Griezmann’s arrival last summer at Barcelona. Quique Setien knows he cannot play all four (Messi, Dembele, Suarez, Griezmann) at the same time.

Nonetheless, this update is encouraging news for Barca fans as Dembele’s recovery is going well and he’s on schedule.

Having undergone mandatory coronavirus tests over the past week, he began a new phase of recovery in the facilities of the Ciutat Esportiva Joan Gamper – where he’ll be encouraged by seeing his teammates who are training again after extended time away.