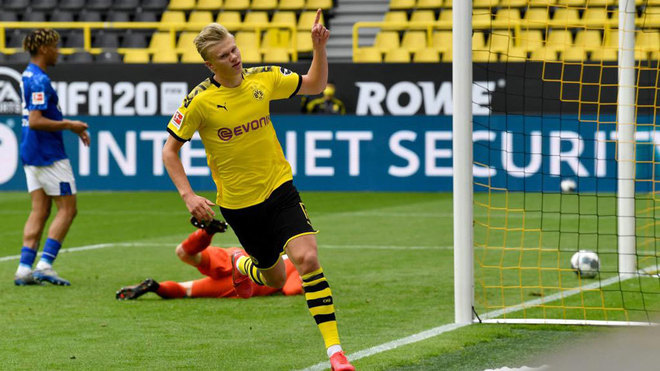 This season’s Bundesliga campaign resumed play this afternoon, with Borussia Dortmund earning plaudits after a 4-0 thrashing vs. Schalke in the Revierderby. It means just one point separates them and leaders Bayern, who play tomorrow.

It seemed fitting and equally predictable that teenage phenom Erling Braut Haaland broke the deadlock just before the half-hour mark at an empty Signal Iduna Park.

The 19-year-old forward has already taken Germany by storm since his £18m move from RB Salzburg in January.

His goal was a razor-sharp finish which left goalkeeper Markus Schubert rooted to the spot, in perhaps the only strike of the afternoon that he could do nothing about.

Teed up by Thorgan Hazard after a deft backheel flick by Julian Brandt, the whole move was intricate and ridiculous in equal measure. Schalke were being split open at will.

Brandt created two assists: one for Raphael Guerreiro after Schubert’s poor clearance, and another for Hazard who made it 3-0 just three minutes into the second-half. 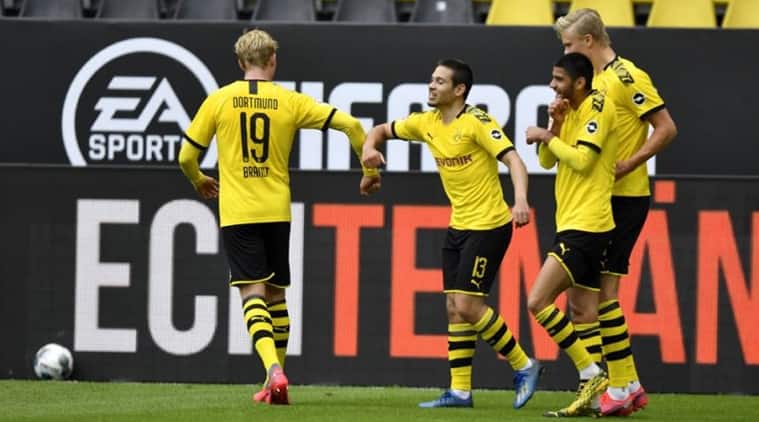 Guerreiro shows off his improvised celebration

Schalke’s defending was questionable at best but certainly not helped by a baffling Salif Sane, who seemed more intent on committing fouls than actually winning possession.

David Wagner made a double substitution to start the second-half, Rabbi Matondo and Guido Burgstaller on for Benito Raman and Jean-Clair Todibo. That too, was futile.

Guerreiro doubled his tally for the afternoon, thanks to Haaland’s pass, before the game petered out as Dortmund cruised to a 4-0 derby day victory.

The scoreline flattered them, but Schalke were poor defensively and their own worst enemy. Since the suspension of play, nothing has really changed for the Royal Blues then.

Schalke were level with us on points at Christmas. Now 17 behind.

Hertha forward Cunha (centre) broke a personal record with his strike vs. Hoffenheim

It might have taken a while, but three second-half strikes in 15 minutes ensured Hertha Berlin earned an important away victory.

They had earned just two wins in their last nine league games prior to this fixture, but have now overtaken two relegation-threatened sides, moving closer to mid-table in 11th.

An own goal courtesy of defender Kevin Akpoguma opened the scoring, before 35-year-old striker Vedad Ibisevic made it 2-0 two minutes later – his first strike since October.

20-year-old forward Matheus Cunha put the game beyond any doubt with 15 minutes to play, netting his third goal in as many games. He now has more goals (3) in five games for Hertha since January (signed for £16m), compared with 35 during his time at RB Leipzig.

In the day’s evening kick-off, Alassane Plea got off to a blistering start and helped Borussia Monchengladbach lay down a marker for their UCL-chasing rivals.

His sharp finish from a tight angle arrowed into the bottom corner after just 35 seconds, before great work by Ramy Bensebaini teed up Marcus Thuram six minutes later.

2-0 up after seven minutes, you could be forgiven for wondering if Eintracht Frankfurt were going to be on the receiving end of a cricket score after some limp defending.

Bensebaini made it 3-0 from the penalty spot after Obite N’Dicka upheld Breel Embolo inside the box, but substitute Andre Silva netted a late consolation for the hosts.