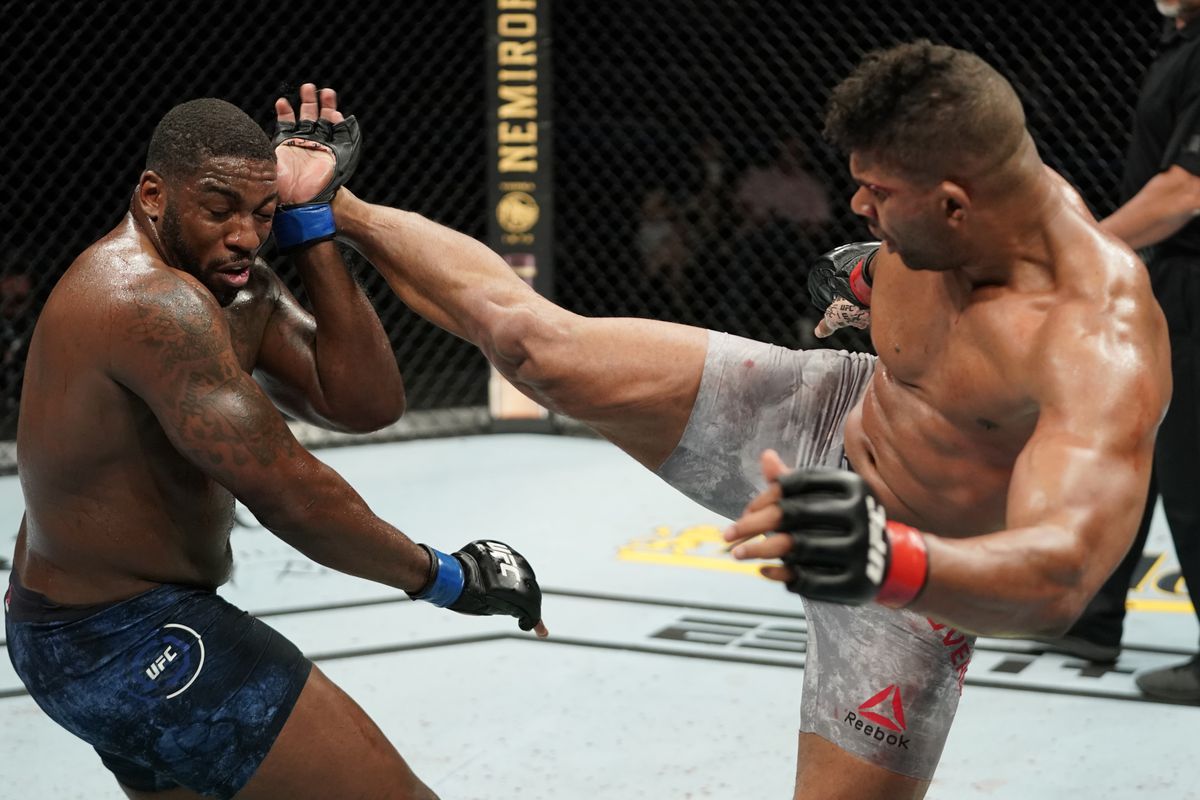 There were big wins for two title contenders, as UFC’s third card in seven days from Jacksonville, Florida was another successful watch behind closed doors.

#8 ranked Overeem celebrated his 40th birhday in style, recovering from a stunning R1 knockdown to showcase both fight IQ and the Dutchman’s evolving skillset with age, against a determined and emotional Walt Harris – ranked just one place below him.

Harris, who was unbeaten in his last four fights, had finished all of his 13 wins via knockout. Emerging as a slight favourite according to betting odds, the 36-year-old was gearing up for the biggest encounter of his MMA career to date.

Despite losing his last bout against Jairzinho Rozenstruik on Dec. 7, Overeem is certainly no slouch. He holds the highest striking accuracy in UFC history (73.3%) and had finished 40 of his 45 wins coming into this one with a mixture of knockouts (23) and submissions (17) showcasing his ability to switch it up, a criticism levelled at many heavyweights.

It’s perhaps why the veteran wasn’t as worried as many others might have been in his position, after absorbing such worrying punishment in the early stages of R1.

Harris connected with a brilliant punch combination which sent Overeem to the ground, yet he managed to somehow survive the onslaught, ground-and-pound and all.

Then, having expended all of his energy trying to finish the fight quickly, Harris was severely fatigued and needed to recover himself. It allowed Overeem to capitalise, controlling the rest of R1 from the ground and earning a foothold in the encounter.

Harris was exhausted. He thought he’d won the fight, but for referee Dan Miragliotta’s patience in allowing Overeem a chance to respond. That’s precisely what he did too: landing a stunning leg kick which signalled the beginning of the end.

The roles had reversed and suddenly Harris had to survive. He tried, blocking ground-and-pound strikes with his body against the cage, but crucially didn’t fightback.

After three minutes in R2, it was all over. Overeem via TKO, which will boost him up in next week’s heavyweight rankings. At 40, there’s not many fights left but a title shot is in the offing provided he can continue to show resilience and quality when called upon.

Overeem praised Harris’ efforts, while taking the time out to thank his team and stress the importance of staying focused post-fight, despite these unprecedented times.

“I brought my best version of me out here tonight – took training camp very seriously and all the details that go with it. We just have to get back on the horse and that’s really important for Walt – hats off to him, he needs to keep going.

Things are also reflex. When you fight, in my opinion, you should not think too much. That’s exactly what I did tonight, just reacting and not thinking too much. There’s two things that I’m focused on: one more crack at the title, and also the closing of my career.”

Harris meanwhile, took time to thank his community, fans and the UFC, apologised for losing and promised that the Big Ticket will “be back and better” in future. 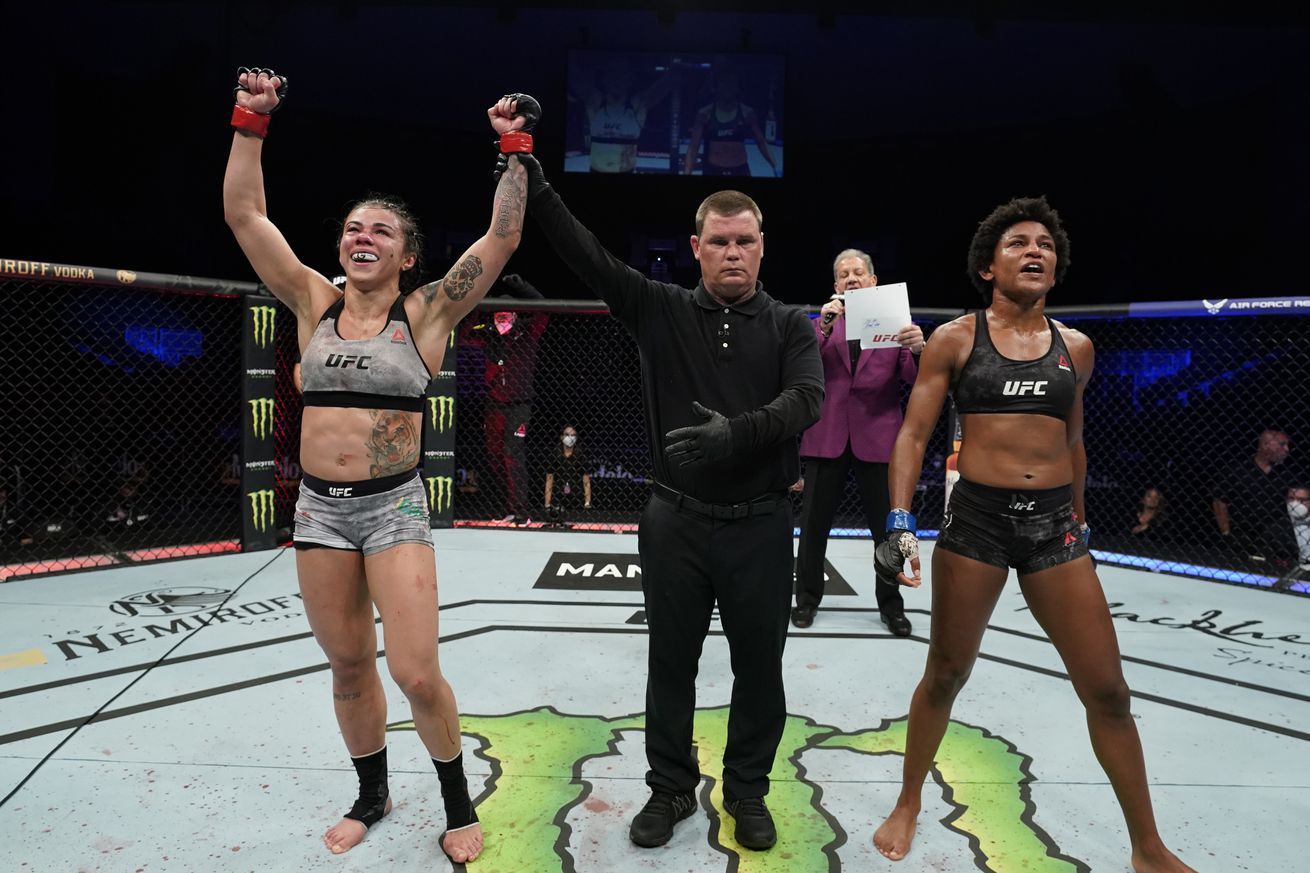 In the night’s co-main event, #6 ranked Claudia Gadelha (17-4) faced an unranked but very busy opponent in Angela Hill (12-7) – this being her seventh fight in 14 months.

However, she was facing a gamely fighter in Hill, who was four years older. That perhaps explains her busy activity in recent months – though this would be a different challenge.

Gadelha earned Hill’s respect early after landing some good strikes, though the American was awkward with her movement and unafraid to exchange either.

However, the Brazilian landed a good takedown late in R1 and added to her Octagon control time before the five minutes were over, providing a timely reminder that this was a different proposition and Hill would need to step up if she was to earn the win.

Having been outstruck 3-to-1 (35 to 11) in terms of significant strikes from the first round, Hill responded defiantly to begin R2 – landing a beautiful shot of her own which stunned Gadelha and scored a knockdown.

It was the encouragement she needed to take more risks, absorbing more damage as she applied pressure of her own and continued coming forward, posing questions.

Feints, the aforementioned movement, mixing up her striking and kicks meant this round was certainly one for Hill, levelling the scoring at one round each.

The R3 and final round made for a nail-biting finish.

Both exchanged shots, Claudia landed a beautiful left hook and connected with an elbow too – but Hill was landing more strikes and seemed undeterred by the Brazilian’s success.

With over 400 strikes thrown in 15 minutes, the result was always going to be a contentious one. Gadelha edged it via split decision (28-29, 29-28, 29-28), much to Hill’s bemusement after a closely-contested encounter.

On whether she did enough to win, the 31-year-old was honest and said she needs these types of fights to help her evolve, while praising her coaches and who’s next for her:

“I think so, pushing the pace the way I did. Angela is fast and I did my best tonight. Of course, I moved to America three years ago, following a dream – my family are in Brazil. Those guys [her trainers] are helping me a lot. Carla Esparza, let’s do it again.”

Let’s run it back!! Leave the grease at home this time 👊🏽 @ClaudiaGadelha_

Stat: The win sees her level with Esparza, Andrade and Hill on seven strawweight victories in UFC history. Only former champ Joanna Jedrezjcyk (10) has more. 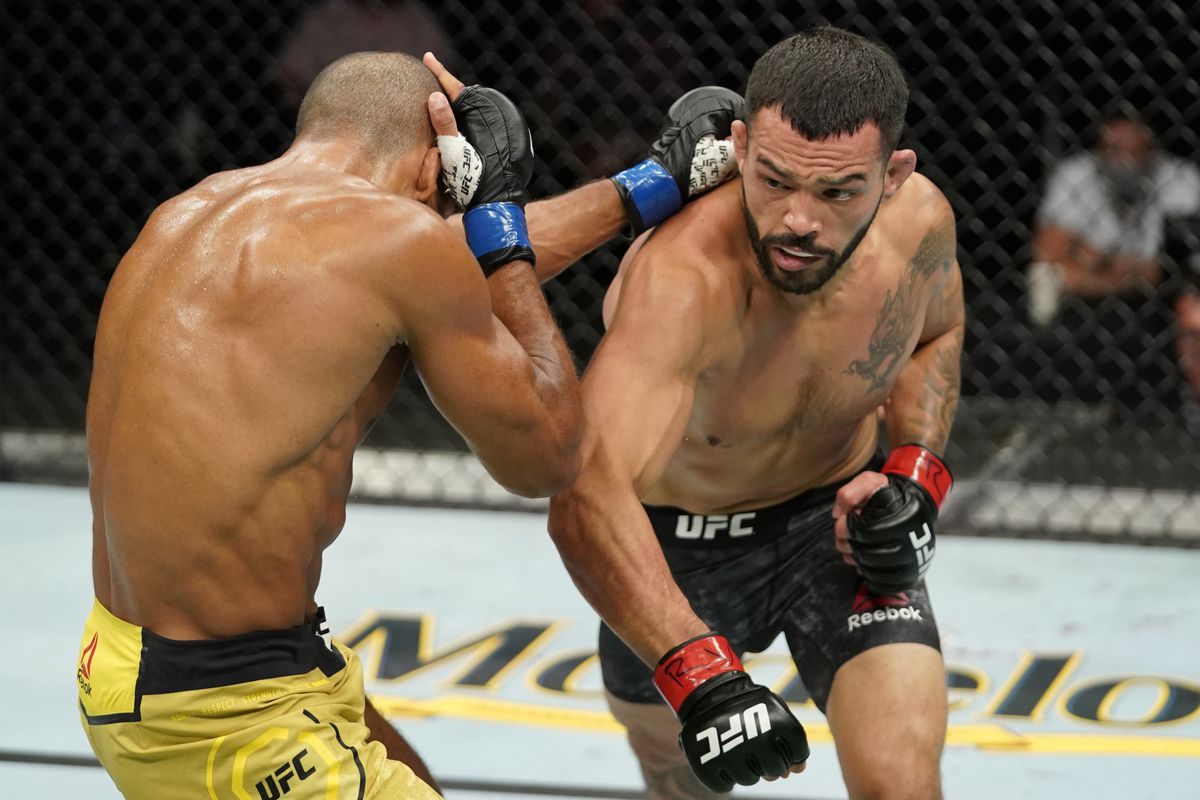 If there was any question whether lightweight Edson Barboza’s new weight class – dropping down to featherweight – would translate to a loss of power and speed, he landed a nasty right hand and almost ended Dan Ige after just a minute in their bout.

Ige responded well to adversity, surviving the ground-and-pound as referee Jason Herzog stood by prepared to step in and stop the match. However, R1 went in the favour of his more experienced adversary, who quickly dispelled any pre-fight questions.

R2 was more balanced and Ige started it brilliantly, launching a number of strikes and importantly pushing the pace against Barboza, who had both a height and reach advantage which made it easier to manoevure even in the presence of a quick opponent.

However as the round continued and Barboza landed more leg kicks, their frenetic pace began to slow and strikes took their toll as Edson finished R2 stronger – even though Ige showed he was more than content in standing to battle with him for 15 minutes.

R3 was a pivotal one where this match would be won and lost. Ige’s takedown and strong finish seemed to shift the balance on judges’ scorecards, as he ended up winning via split decision (28-29, 29-28, 29-28) despite Barboza’s visible frustration post-fight. It has since emerged that the Brazilian’s manager intends to appeal the narrow defeat.

He spoke to Paul Felder and revealed any pre-fight nerves were quickly banished.

“I did my best to grind, Edson is one of the best and I’m honoured to share the Octagon with him – you know that. It’s not easy, I was nervous and shaky today but I don’t care who’s in-front of me. Six in a row, it’s not easy to do in a shark task: I want the Yairs, the Stephens, the Zombies, Dana if you don’t know, now you know.”

Statistic: Ige’s latest win means that only Arnold Allen (7) has a longer active win streak in the featherweight division than the 28-year-old, with #3 ranked Zabit Magomedsharipov and champion Alexander Volkanovski now all tied on six apiece.

Jotko, 30, taunted Anders during the dying seconds of R3 after it was apparent that neither would secure a stoppage victory. After all, the 33-year-old’s power and bullish nature gave him a slight advantage pre-fight, yet he was unable to use it effectively – instead struggling with his grappling and failing to control the encounter.

No excuses. Hats off to @JotkoMMA he was the better man tonight. Good luck in the future.

Both exchanged good strikes but Jotko landed more accurately, although large periods of this fight was against the cage and a frustrating watch for blood-thirsty knockout fans.

Song Yadong (16-4, 1 NC) defeated Marlon Vera via unanimous decision (29-28, 29-28, 29-28) in the night’s first main event fight, though questions were asked about the judging in another closely contested encounter. Nonetheless, this was an exciting fight to kick off the main card and earned Fight of the Night honours.

In the welterweight division, Miguel Baeza stopped Matt Brown just 18 seconds into R2 via a devastating knockout punch that left the 39-year-old defenceless.

Kevin Holland (17-5) smirked as he entered the Octagon and was in for a blistering finish, as the 27-year-old middleweight beat Anthony Hernandez via TKO in 39 seconds.

There were two decision wins in the featherweight division, as Giga Chikadze and Nate Landwehr earned deserved victories over Irvin Rivera and Darren Elkins respectively.

After six defeats by decision since her UFC debut in 2015, Cortney Casey (9-7) didn’t want to get the judges involved and instead raced to a R1 submission win vs. Mara Romero Borella with an impressive armbar finish.

She and the aforementioned Baeza both won Performance of the Night ($50k) honours.