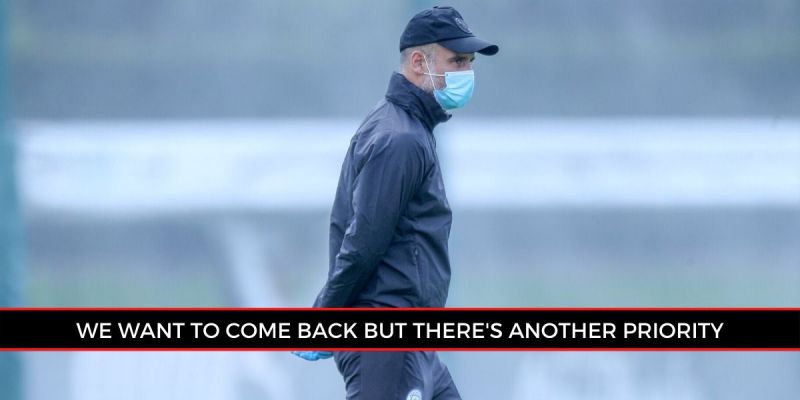 Pep Guardiola spoke in a brief interview today, as his players continued their socially-distant training sessions today. He revealed they have returned in “perfect” condition, with transfer-linked Leroy Sane among those who featured.

The defending champions were one of the last clubs to begin small group training sessions last week, as the UK’s Project Restart plans took a significant step forward.

After all 20 teams unanimously agreed last week, players began training in small groups for the first time since March’s suspension.

Previously, they were only permitted to train individually.

Guardiola, wearing a face mask and gloves, observed the social distance guidelines during an interview with one of their club journalists.

The Spaniard said it was “nice to come back”, especially with the sun being out today on May’s bank holiday Monday.

However, he acknowledged these circumstances are far from ideal and also recognised the key workers who have been a tremendous help during these unprecedented times.

“We follow the rules, the protocol. We have to, so this is the most important thing at the end. We don’t do anything special so the special [people] are the doctors, nurses, scientists, cleaners.

They put their own risk, their own lives to save ours – at the end this [players returning] was nothing special. In a special situation around the world, you have to adapt.”

On whether he’s been impressed with his players after almost three months of inactivity, Guardiola was pleased:

“Yeah, really good. I think they are looking forward to coming back, training again and do what they like [playing football] so they come back perfectly.”

Among those who trained were Aymeric Laporte, John Stones and transfer-linked Leroy Sane, whose City future remains uncertain as Bundesliga champions Bayern lurk over his signature.

Guardiola urges safety for all during these uncertain times

Pep was also asked to give a message to City supporters who are missing football in their lives. The 49-year-old used that opportunity to reflect while urging caution for all, whether they support the defending champions or not.

“I think all the fans around the world are waiting to watch football, we want to come back but there’s another priority: stay safe, be careful and when everything is possible, we are coming back without them first but at the end, hopefully, we’ll come back to a routine.

The most important thing is follow the instructions, if they say use the mask, stay at home, social distance, we have to do it. There are many people who go to the NHS around the world who, again, put their own lives at risk to save ours and it’s incredible what they have done, we have to follow them. Now we cannot do anything wrong.”

Manchester City were 25 points behind leaders Liverpool, having played a game fewer, before the shutdown in mid-March. The Citizens, who won the Carabao Cup on March 1, could still have won more silverware this term – the FA Cup and Champions League.