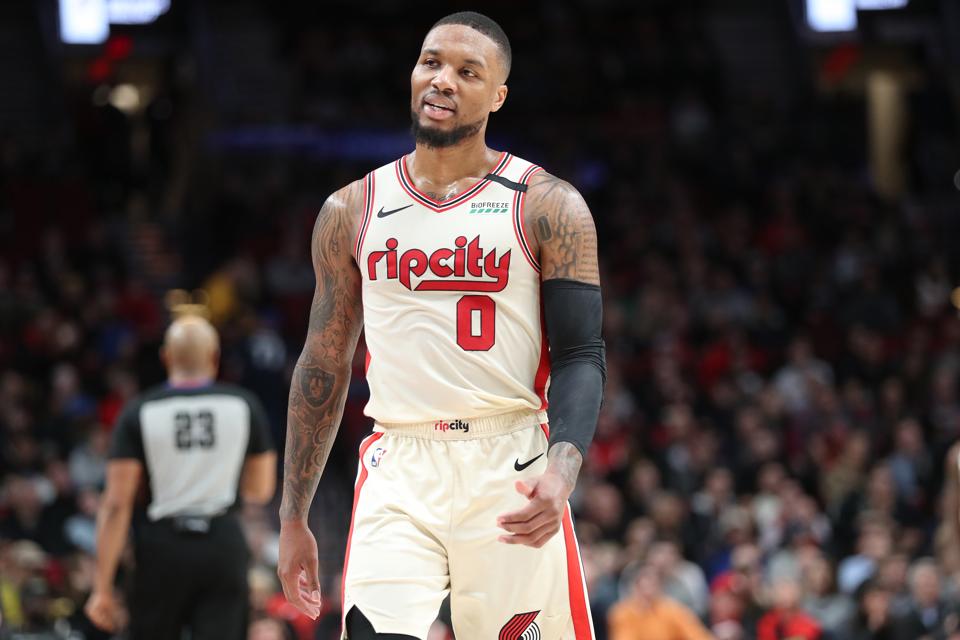 Portland Trail Blazers’ All-Star guard Damian Lillard has confirmed he will not complete the 2019-20 NBA season when proceedings resume later this summer, if the Blazers are not afforded a ‘true opportunity’ to make the postseason.

Portland (29-37) were three-and-a-half games out of the eighth seed, occupied by the Memphis Grizzlies, when the NBA season was postponed indefinitely in March.

If the NBA resumes the 2019-20 season by choosing to play a handful of games with all teams just to reach 70 games – thus fulfilling regional television deals – Lillard was brutally honest with what his next move will be.

He told Yahoo Sports’ Chris Haynes: “If we come back and they’re just like ‘we’re adding a few games to finish the regular season,’ and they’re throwing us out there for meaningless games and we don’t have a true opportunity to get into the playoffs, I’m going to be with my team because I’m a part of the team. But I’m not going to be participating – I’m telling you that right now. And you can put that in there,” via phone.

The NBA anticipate restarting the season at some stage in late July at the Walt Disney World Resort in Orlando, Florida. As of now, the league are considering a number of options on how to settle the season: do all teams participate?

Lillard explained that he’s “all-in” if the league decides a play-in tournament to determine the final seeds in each conference, though it’s unfair the Blazers could fall short when they still had 16 games left to play before the pandemic.

The Blazers were among the league’s most underwhelming teams for large periods of the season, not helped by injuries to frontcourt pair Jusuf Nurkic and Zach Collins.

They were slated to return for the final few games, while Carmelo Anthony’s arrival and purposeful scoring provided an additional option alongside Lillard and CJ McCollum.

As an extension of his phone conversation with Haynes, Lillard believes he and his teammates deserve an opportunity to show what they could be at full strength.

“It would suck not to get in the playoffs because our thing was, we had fought ourselves back into position to get a spot. We had our starting center and power forward coming back, so had a lot to look forward to and for a great reason.

“Now, they’re healthy and have extra time to train, rehab while everybody’s rusty. So now, they won’t be coming back as the only rusty players. If everybody’s rusty, we can come in here and beat everybody. I do feel like if we do come back and our mind is right, we can beat anyone.”

The Athletic’s Shams Charania reported league commissioner Adam Silver wants to make a final decision about how to resume the season – or cancel what remains – by mid-June.

This would leave 3-4 weeks to determine how they handle playoff seeding, making sure their medical plan is prepared amidst the pandemic, while getting all teams back into training camps with the Disney World complex in Orlando reportedly the lead candidate to host games this summer.

Meanwhile, NBPA boss Michele Roberts says players “really want to play” and stressed there needs to be clarity over the situation sooner rather than later.