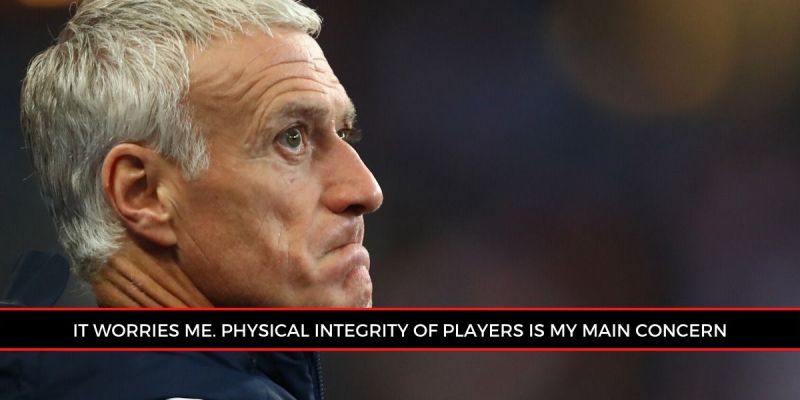 England’s top-flight is among Europe’s top divisions set to resume next month, but France coach Didier Deschamps insists they are only doing so due to financial reasons – while sharing his worries over player fitness and heightened injury risk.

Deschamps has backed the decision to end this season’s Ligue 1 campaign amid the COVID-19 pandemic, insisting other leagues – including the Premier League – are resuming purely due to financial reasons.

Some clubs have threatened to take legal action, while Lyon and their president Jean-Michel Aulas have been vocal in their displeasure, urging the decision to be overturned after the Bundesliga’s resumption.

Italy’s Serie A and the PL are set to recommence next month, as well as La Liga, meaning Ligue 1 will be the only one of Europe’s top five leagues not being concluded on the pitch.

Today, the Premier League’s 20 clubs unanimously agreed to return to contact training for the first time since March’s suspension.

Nonetheless, Deschamps feels French authorities made the right decision, highlighting inconsistencies with some protocols in Germany having watched the Bundesliga’s return.

He told Le Parisien: “I don’t want to judge, condemn, to blame. The containment conditions are not the same for everyone. I see players playing a game with all the elements specific to football: namely contact and tackles. And then, we see in the stands masked substitutes two metres away from each other.

“Honestly, I don’t understand. They are in the same enclosure, likely to come into play at any time. In the stands, is the risk increased? What an inconsistency – I do not like it.”

Deschamps also suggested that monetary concerns are behind LaLiga and the PL’s proposed June resumption, while giving a recent example to further support his point.

“Life resumes with a lot of restrictions in all areas. In football, the resumption of certain championships obviously responds, first of all, to an economic problem. Look at the decisions made in Spain and England.

“These two major football countries are planning [to resume], but have decided not to resume the women’s championships, which generate much less revenue. That says everything.”

Deschamps is also concerned players in the leagues that resume are not well prepared enough, prompting an increased risk of injury.

“It worries me. Whether you are a coach or club president, we all have interests specific to our function. The physical integrity of my players is my main concern. Some abroad will resume competition without having carried out full preparation.

“No matter how much you say, such a stop requires six weeks of refresher training with at least five friendly matches. That’s far from being the case. They will chain matches every three days in summer, with high temperatures. The risk of injury is increased.”

In the most recent France squad, there were seven PL-based players – with Manchester United duo Paul Pogba and Anthony Martial among the notable absentees.

The pair, along with Manchester City’s Aymeric Laporte and more besides, have suffered persistent injury issues recently. A premature return without effective preparation could further hinder their development, while fellow Premier League midfielder N’Golo Kante remains absent from Chelsea training over his personal coronavirus concerns.