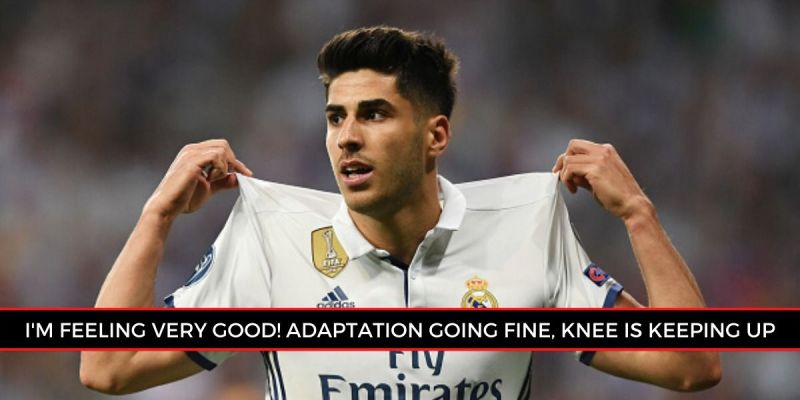 Real Madrid midfielder Marco Asensio has issued an encouraging update on his fitness, as he continues recovering from the ACL injury expected to sideline him for the entire 2019-20 season. The 2019-20 LaLiga campaign resumes next month.

Having sustained a serious injury during an otherwise innocous pre-season game against Arsenal last July, he tore his anterior cruciate ligament and meniscus. After successful surgery the following month, the Real Madrid man is keen to return better than ever.

The enforced break has allowed Asensio extra time to recover without missing out on more action for both club and country, with the Spain international is ready to contribute.

3 – Marco Asensio is the second player to assist three goals in a game for Spain in the last 10 years (Nolito vs Liechtenstein in 2016). Stellar. pic.twitter.com/BbgtFYBOVN

He spoke to Real Madrid TV, sharing his thoughts about recovery and how he feels after being cleared to train with the first-team squad over the past fortnight.

As quoted by Managing Madrid, the 24-year-old said:

“I’m feeling very good! The first week was a bit different given that I was able to train with my teammates again after so many months. My adaptation is going just fine and my knee is keeping up, so in all honesty I feel very good physically.”

Naturally, he’s had to remain patient while keeping his spirits up during the recovery process.

This represents the first serious injury during his career to date, where he’s been watching helplessly as teammates train without him.

However, he’s happy to be back playing again.

“It’s been a long wait for me. I worked a lot and stayed patient because it was tough for me to rehab when my teammates were training each and every day. I joined my teammates on the field and that’s what important now. It was worth the wait.”

Asensio also revealed that both he and his Real teammates are still trying to gel and play as a unit after a three-month hiatus.

“We’ve spent quite a while without being able to stay on the pitch together and now we are still getting used to the offensive and defensive mechanisms. We are now able to train with more people and the intensity has picked up.

“We will surely get better as soon as the competition gets closer, although we got here with a good physical condition and looking forward to training together. We’ve done a good job on our homes and now that’s paying off.”

Once the season resumes next month, Real Madrid have 11 games to cut Barcelona’s existing two-point lead and win the 2019-20 La Liga title – one major trophy which has regularly eluded them over the past decade.

“We’re looking forward to La Liga restarting again so that we can face those title-deciding games. We know it’s going to be do or die, we have to give our best in every game and we’ll try to win every single game we have left.”

While Asensio will likely need minutes off the substitutes’ bench until he regains confidence and momentum, it’s possible he ends the season as Real’s starter on the right wing – provided he impresses Zinedine Zidane enough to warrant a starting berth.

He alternated wings frequently during the 2018-19 campaign, where he netted one goal and created eight assists in 30 La Liga appearances.