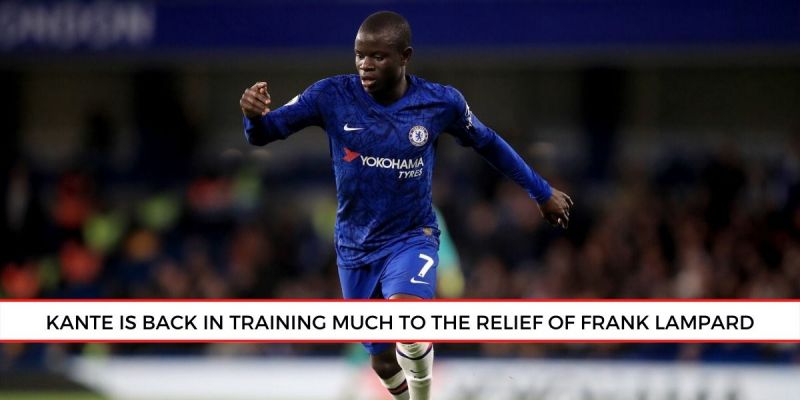 On the day that England’s top-flight have agreed a June 17 return, it has emerged that Chelsea midfielder N’Golo Kante has resumed individual sessions at the club’s Cobham ground, following successful talks with head coach Frank Lampard.

Kante was granted compassionate leave by Chelsea to stay away from training after expressing fears over the coronavirus last week, raising serious doubts as to whether he’d be willing and prepared to feature in their remaining nine top-flight games.

The Blues currently occupy the final Champions League qualifying berth in fourth place, but only three points separate themselves and fifth-placed Manchester United.

Kante was given the full support of the club’s board and Lampard, though it is understood he has been running and training individually this week – having previously followed a personalised home programme.

Pictured attending the first day of phase one training last week with a new haircut, he informed the club of his stance and missed sessions over concerns surrounding safety.

Back to it. 💪⚽️ pic.twitter.com/NH3LUonHai

That request was met with understanding and Lampard has been patient, even with Kante being one of his most important players during a campaign that could still end with an underwhelming finish from their perspective.

As I reported yesterday, Lampard has worked to allay Kante’s fears and those talks have had a positive impact on the France international – which is a welcome boost for them.

However, the World Cup winner is not yet confident enough to feature in contact training with his teammates.

It remains to be seen whether he’ll be available for selection when Chelsea face relegation-threatened Aston Villa in their first fixture back next month.

Kante’s situation is a delicate one, considering elder brother Niama died of a heart attack shortly before the 2018 World Cup.

He also lost his father when he was 11 and has largely remained indoors with one of his brothers since the season was suspended in March.

He experienced a health scare of his own when he collapsed in-front of shocked teammates at the club’s training ground two years ago.

Tests did not reveal any heart concerns, though he missed their next game and those concerns are justified given the circumstances.

According to the Office for National Statistics, black men and women are twice as likely die from coronavirus as white people in England and Wales.

There have been 12 positive cases from 2,752 top-flight players and staff tested so far.

According to the Telegraph, N’Golo could be willing to make a full return at some stage but the club will continue to avoid pressuring him into a decision while his other teammates continue working together in small groups.

No timeframe has been put on his return to group sessions, so it’s possible he misses the season’s resumption date if not deemed sufficiently up to speed.

Mendy, 25, made 23 appearances across all competitions under Pep Guardiola this season before the coronavirus-enforced break in mid-March, including 13 PL starts.

During a video interview with Sky Sports, the France international revealed it’s easy for players to get wrapped up in the specifics on social media as speculation continues over when the 2019-20 season will resume.

So, he’s staying patient and waiting for official confirmation from Manchester City staff.

“We’re waiting. We can see some kind of info on Instagram, Twitter, ‘the league’s going to come back.’ Me? I wait, when the people and staff of Manchester City text me, ‘this is when we train, this is when the league starts.’

“Until then we wait, follow the rules, stay at home and do like everyone around the world.”

Mendy also revealed his belief that although the circumstances are far from ideal, especially with behind closed doors games, players will be prepared to feature when called upon.

“I think when they say okay [and officially greenlight an EPL return], they take every precaution for players. It’s not going to be the best way – it’ll be difficult to play behind closed doors – but we’ll still play. Until then, we wait. I hope they do everything to protect [everyone] first and then after, we have football and we’re ready.”