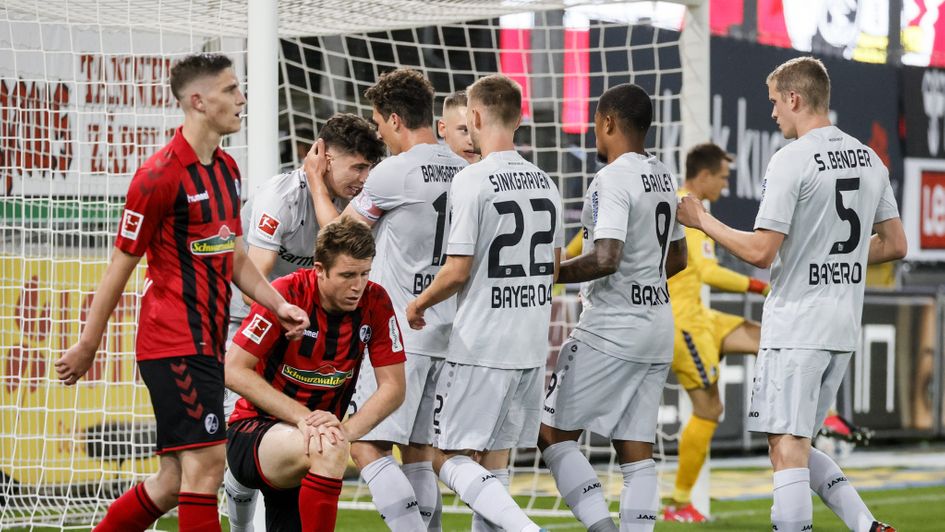 Kai Havertz made Bundesliga history on Friday night, as Peter Bosz’s much-changed Bayer Leverkusen side battled hard to earn a slender but important victory over SC Freiburg – a win taking them third ahead of the weekend’s fixtures.

After their 4-1 defeat by Wolfsburg on Tuesday evening, Champions League-chasing Leverkusen returned to winning ways but made hard work of their win at Freiburg.

Bosz made six changes while altering the team’s formation after losing just three days earlier, as they prevailed at the Schwarzwald-Stadion for the first time since 2011.

Jonathan Tah returned from injury after two months sidelined and looked assured as ever, while there were starts for Leon Bailey and 17-year-old midfielder Florian Wirtz.

BT Sport commentator Paul Dempsey appeared all too eager to criticise Bailey on his first start since the enforced break, reminiscing on the highly-rated winger’s better days.

Granted, the Jamaica international didn’t help his cause much: caught out of possession and seeming hesitant to shoot at times, despite getting himself into dangerous areas.

Nonetheless, the first-half was drab and not packed with chances for either side. Leverkusen saw plenty of the ball but were starved of any clear openings early on.

Freiburg had to work for openings and Holer missed their best one. (Picture source: Eurosport)

He opened his body, curled the strike goalwards before watching it trickle narrowly wide after goalkeeper Lukas Hradecky sprinted of his line to close down the angles.

His disbelief was justified. Freiburg were made to work hard and remain patiently, as evidenced by their 29% first-half possession, so needed to make chances count.

Curse of the commentator strikes again

With star man Havertz quiet and Bailey disappointing, you could almost sense the frustration in Dempsey’s voice as the second-half started slowly, similarly to the first.

It seemed typical then, that after speaking about him throughout the first-half, Bailey played a pivotal role in Leverkusen breaking the deadlock – from seemingly nowhere.

Bailey exchanged passes with an overlapping Havertz, evading one defender in his path before teeing up the 20-year-old.

Somehow, he managed to stick out his gangly leg and poke the ball through goalkeeper Alexander Schwolow’s legs while being challenged inside the six-yard box.

Attractive goal? No. Instead, this typified Havertz’s brilliant movement and awareness as he regularly senses dangerous moments before they happen and again seized the opportunity on this occasion.

Kai Havertz is the highest scoring Bundesliga player EVER before his 21st birthday.

Wirtz skipped past two defenders and fizzed an effort high but narrowly wide of Schwolow’s top corner two minutes later, as Leverkusen were suddenly energised by going ahead.

Carrying a knock, Havertz was replaced by Moussa Diaby with 25 minutes to play as both sides made alterations.

Despite looking increasingly fatigued and frustrated, the hosts stepped it up a gear as time wore on. They could still equalise. They almost did, too. Fullback Christian Gunter delivered two inviting corners, which none of his teammates could latch onto.

Then, striker Nils Petersen struck goalwards from close-range seconds after Leverkusen defenders were caught in transition. Hradecky was equal to it, tipping it out for another corner. Leverkusen held firm under pressure though, to earn a hard-fought three points.

All three teams are in action over the coming days, so Bosz’s side will be watching closely to see if any rivals drop points as they did in midweek.

Unbeaten in twelve across all competitions before the Wolfsburg loss, they will hope that was just a blip. Having won without particularly playing well here, it’ll give them quiet confidence they can do better than Dortmund when hosting leaders Bayern on June 6.